Sip on These Upcoming Beer Events in Boston

The O.G. beer festival, Extreme Beer Fest, returns to Boston February 2-3, and there are still tickets available to the first session on Friday evening. As is tradition, Boston beer bars are getting ready to welcome brewers and buds from around the country. Here are some of the parties on the books so far, and more can’t-miss brew to-dos. 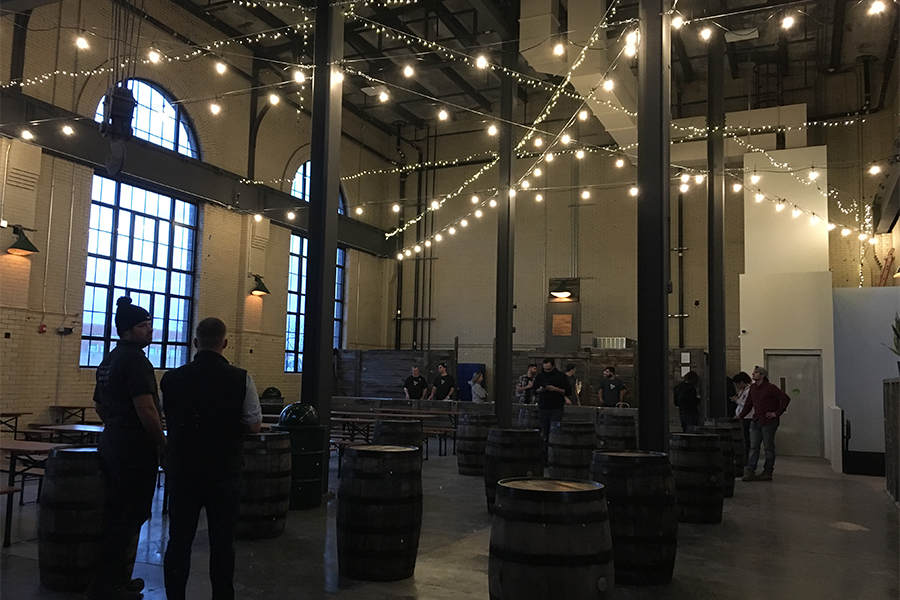 The Trillium Garden at the Roslindale Substation. / Photos by Jacqueline Cain

Beer director Magellan Casto’s annual lead-up to the party is well underway, but special kegs she tapped of Hanssens Oude Lambic, Brooklyn Black Ops, 2015 Lost Abbey Red Poppy, and tonight’s Springdale Desert Solitaire are all still pouring in Watertown. Tomorrow will see the Allagash sour brown, James & Julie; and #EBFPrepWeek—as in, prepare your liver—caps off Thursday, Feb. 1 from 5-8 p.m., with special guests Finback (NY), Upland (IN), and 2cabeças of Brazil. The Collective Brewing Project from Fort Worth is also joining, and sharing a keg.

Trillium Brewing has a plethora of events planned for EBF weekend. Up first: A must for sour lovers. Berkeley, California’s the Rare Barrel team is bringing “an insane selection” to the Garden at the Substation. Beers like Ensorcelled (a dark sour aged in oak with raspberries), Entanglement (a golden sour aged in oak with orange zest and vanilla), and a half-dozen more will be tapped at random throughout the evening

Festival organizers BeerAdvocate and sponsors Dogfish Head Brewing descend upon Meadhall once again for this annual pre-game. “Expect an epic lineup of beers and people,” they promise. The beer list is forthcoming for the first-come, first-served, and pay-as-you-go party.

The Publick House hosts a warm welcome back to Mass. for Chicago brewery Half Acre, along with their great friends Allagash Brewing. The night features rare and limited-release finds from both breweries. 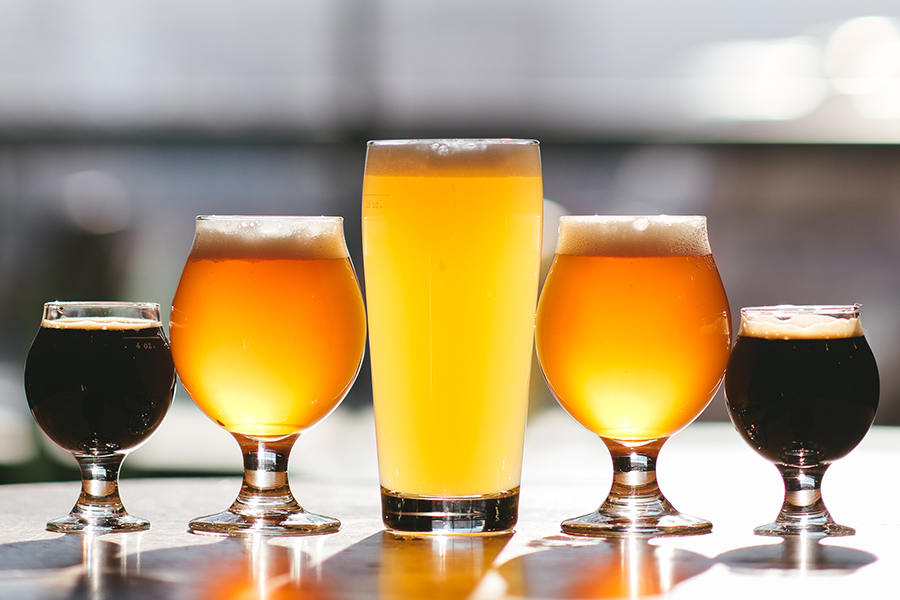 A lineup from Night Shift Distributing partner breweries is on tap at the Tip Tap Room ahead of Extreme Beer Fest. / Photo by Tim Oxton

The wholesale arm of the growing Night Shift company will assemble its #squad for a pre-EBF tap takeover at Tip Tap Room. Six of its partner breweries will be at the fest, and thus at this party: Magnify, Solemn Oath, Interboro NYC, Destihl, Trophy, and of course, the home team—Night Shift Brewing. A draft list is forthcoming, and the evening is pay-as-you-go.

Barrels From The Vault

The Ginger Man kicks things off Thursday night with kegs of some of the most sought-after EBF beers—among the lineup is Firestone Walker Parabola (2017), Founders KBS (2017), Half Acre Orion, Springdale Ghost Species, Allagash Pastiche, and many, many more. Check out the lineup on Facebook for this pay-as-you-guy hang.

Pre-game the festival with pinball and beer—and fight breast cancer at the same time. For every pint of Cincinnati’s Rhinegeist Press Tart Beliner weiss, or Bubbles rosé ale sold at A4cade during the party, $1 will be donated to the Susan G. Komen foundation. Other guest drafts are from Revolution Brewing, 7venth Sun, Sketchbook Brewing, and more.

Here’s hoping you helped kick Thursday night’s the Rare Barrel sours, because J. Wakefield brings the Miami heat to Trillie Rozzie on Friday. “We’re especially excited to taste their TWO brand new Matusalem Rum Barrel Aged Stouts that will be premiering at the event,” the Trillium team says. Other brews that will rotate on draft through the night: Orange Dreamsicle, a Berliner weisse, 2nd Breakfast (an imperial sweet stout with almonds, cinnamon, and vanilla), All I Do Is Wynwood double IPA with Gewürztraminer grapes, and more.

Plans are in motion for this epic sour soiree. Ticket sales are open up to the public for a Session 1 after-party with TRVE, the Rare Barrel, Kent Falls, Blackberry Farm, and Allagash. Tickets include three, 10-ounce beers, passed bites, and all taxes and gratuity.

The Merchant stocks its 36 draft lines with EBF beers every year. Chicago’s Revolution is hosting this year, with limited barrels from them, Dogfish Head, the Rare Barrel, Oxbow, Grimm, and many more exhibiting breweries. Some brewers themselves will be mingling around until last call, and food is served ’til 1 a.m., too.

Gather is only a block away from festival site Seaport World Trade Center, so the bar staff has lined up a weekend of drafts from distributor Craft Collective. The full beer list will be released the week of EBF.

You’re proooobably going to need a hearty meal on Sunday morning. City Tap House has you covered, with a hangover brunch with BeerAdvocate and more EBF friends. Stay tuned for more details. 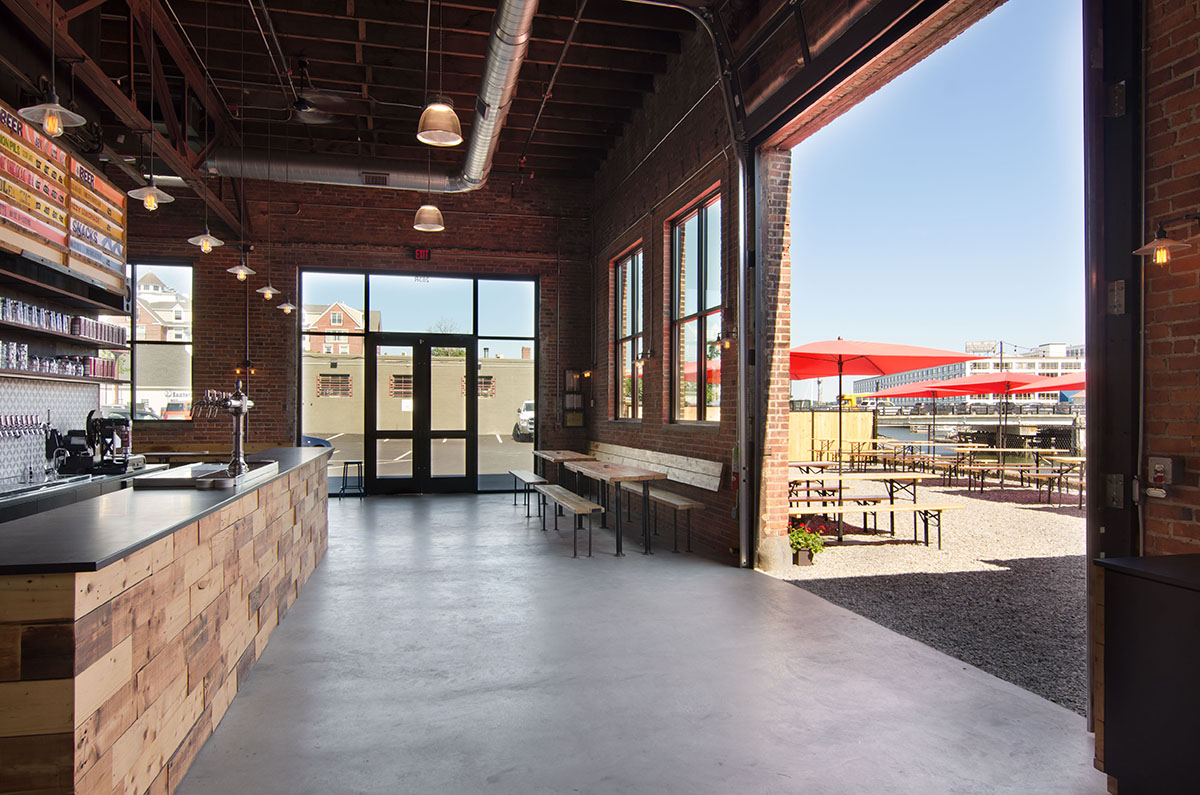 Trillium made a lager, you guys! JC Tetreault visited session master Chris Lohring at Notch Brewery to learn the ways of lager, and the result is I Predict a Riot. No kidding—the hype machine is real when these two breweries are involved. But also, that’s the name of the beer. Try it during two special events: on Saturday, Notch takes over the taps at Trillium Roslindale, and on Sunday, Team Trillium heads up to Salem to pre-game the Super Bowl. Saturday’s event will have sausages care of Meadowlark Butcher from noon-4 p.m., with Notch’s Tenner Czech pale lager, Dortmunder German pale lager, Polotmavy Czech amber lager, and Cerne Pivo Czech black lager on draft all day. 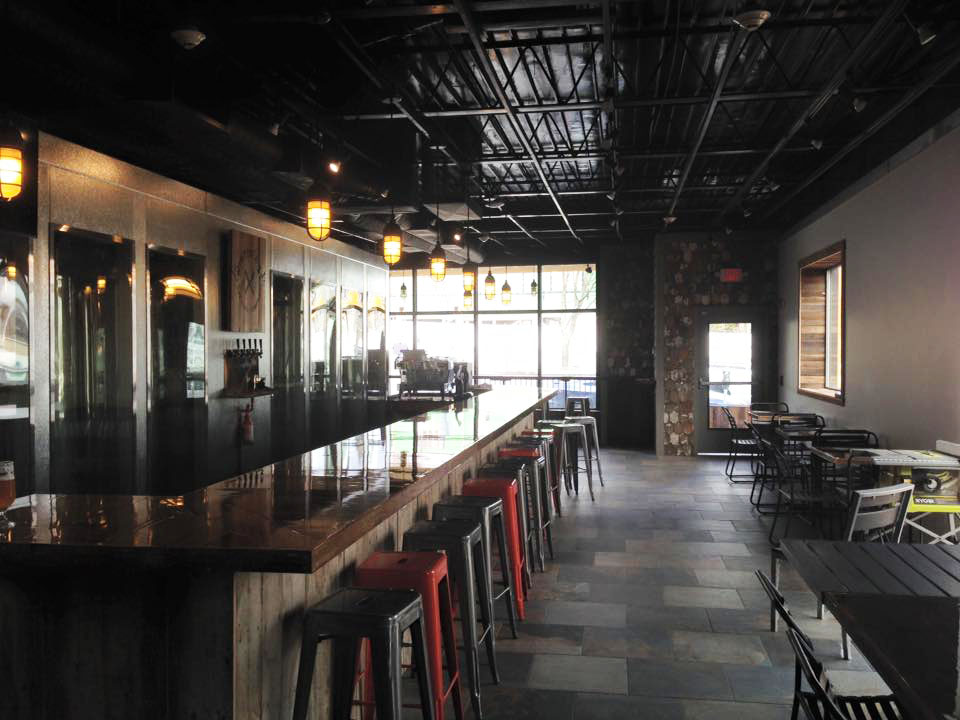 Find a thoughtful, handmade Valentine’s Day gift for someone special, support arts education, and sip pints while you’re at it. Art Party, a coalition of artists that brings pop-up, humanitarian-centered craft fairs to local businesses, is hosting a few beer-y events in February. On Saturday and Sunday, February 3 and 4, support the Runkle Elementary School art department (Brookline) at the Publick House. On Saturday, Feb. 10, Brewers Fork supports the Harvard-Kent Elementary School art department. And on Sunday, Feb. 11, a fair at Winter Hill Brewing is for the Winter Hill Community Innovation School art department. Find out more here.

Want to check out new south-of-the-city breweries like Widowmaker Brewing, Barrel House Z, and more—but don’t have a designated driver? Heard that. The Tap That Boston luxury coach is organizing a day trip from North Station, to Widowmaker in Braintree, Barrel House Z in Weymouth, and Norwood’s Castle Island, and new Percival Brewing companies. Tickets include three, four-ounce tasters at each brewery, lunch from Sarcastic Swine BBQ, guided tours, and more. Not to mention peace of mind. 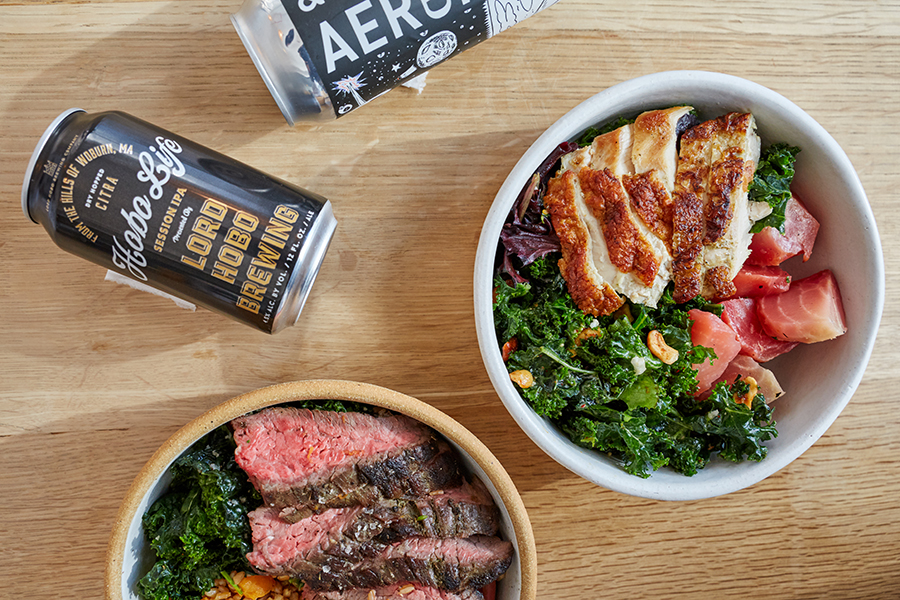 Sure, you drink a fair amount of beer, but you are also very virtuous and love bowls from fast-casual favorite Dig Inn. The best of both worlds combine this Wednesday with a saisonal dinner party. Aeronaut and Lord Hobo brewing companies teamed up with the Copley Square Dig Inn staff to develop two specials that pair perfectly with their beers. For one night only, get a pint of Hop, Hop, and Away to pair with the Aeronaut Upstream bowl, which tops organic Maine farro and butternut squash with wild Alaskan salmon, and a variety of veggie sides. Or, choose among Hobo Life, Glorious, and Boom Sauce to go with the Lord Hobowl—classic brown rice topped with broccoli three ways, coconut roasted carrots, sesame crunch, charred chicken thigh, and a Sriracha dressing drizzle. If you miss the party, don’t fret—these ingredients can always be combined in a bowl at Dig Inn, and the Boylston location has Hop Hop and Hobo Life on draft.

Pig out in the South End on Thursday. A whole hog is on the spit, and a $30 ticket gets all-you-can-eat pork and sides, plus a pint from Cambridge brewery Lamplighter. Tax and gratuity need to be paid on-site, and additional beers are $8 as you go, too.

Down the Road Beer Co. taproom photo by Alex Weaver

Beer for Good: Hurricane Relief Gose at Down the Road

Months after Hurricane Maria, nearly half Puerto Rico’s residents are still without power and other basic human needs—so Down the Road Beer Co. is stepping up to help. The Everett brewery’s newest beer, Colibri Hurricane Relief Gose, features guava, mango, and Puerto Rican sea salt. All proceeds from the tart and tropical ale will be donated to the Boston Foundation’s hurricane relief fund. A release party on Thursday night will turn the taproom into a Puerto Rican paradise, with art for sale by PR artists, live music by Ten Tumbao, authentic food, and even salsa lessons. The party is free to attend, but you can register to help them plan ahead. 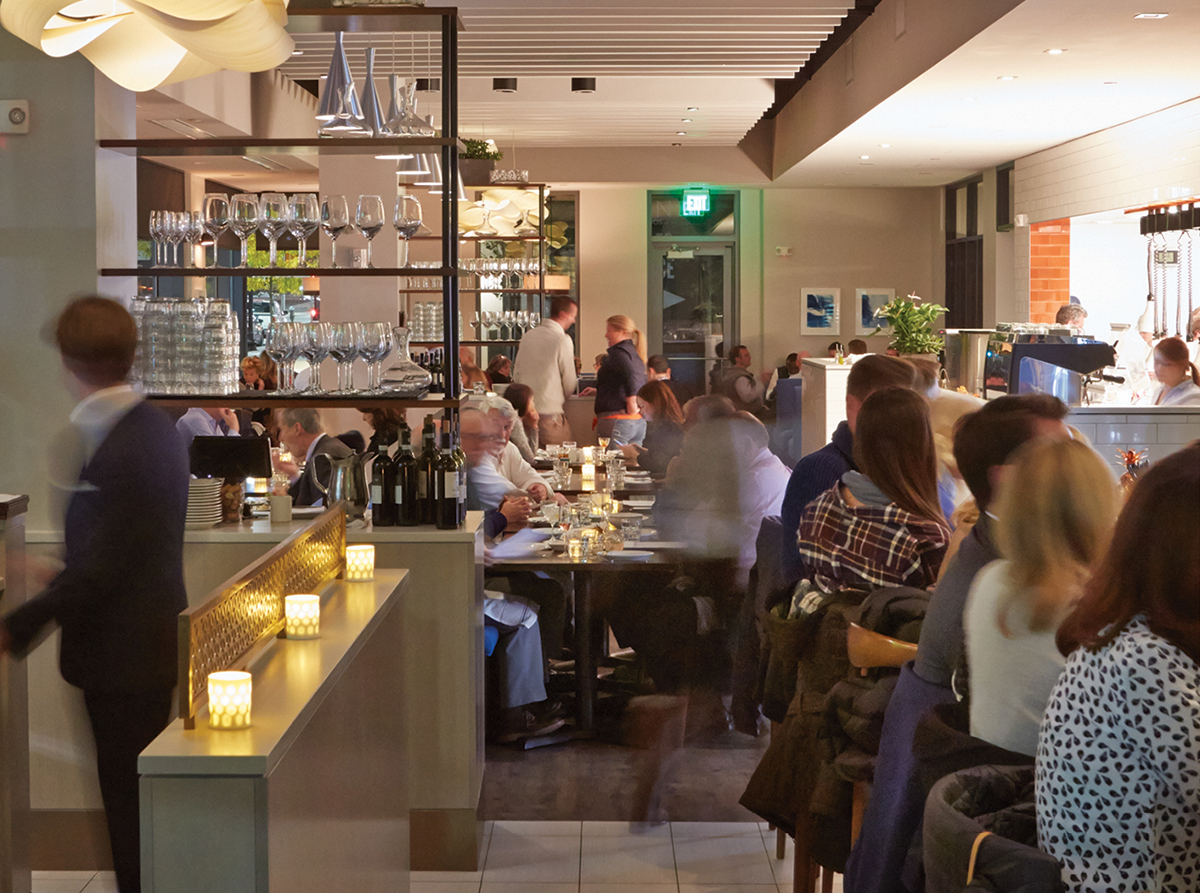 Chef Colin Lynch is proud of his Newburyport heritage—hailing from the North Shore area is a badge of honor, he says—and he’s inviting a few neighbors to his South End restaurant to celebrate on Sunday, Jan. 28. Chefs David Bazirgan (Bambara), Dave Becker (Sweet Basil, Juniper), Paul Callahan (Ceia, Brine, Oak + Rowan), and Suzi Maitland (Trina’s Starlite Lounge, the Paddle Inn) are creating courses to pair perfectly with pints from their hometown beersmiths, Newburyport Brewing Company. Tickets are $65 per person, and include tax and gratuity.