Wink & Nod, Mida, Momi Nonmi, and Moody's Backroom are inviting some friends over for dinner. 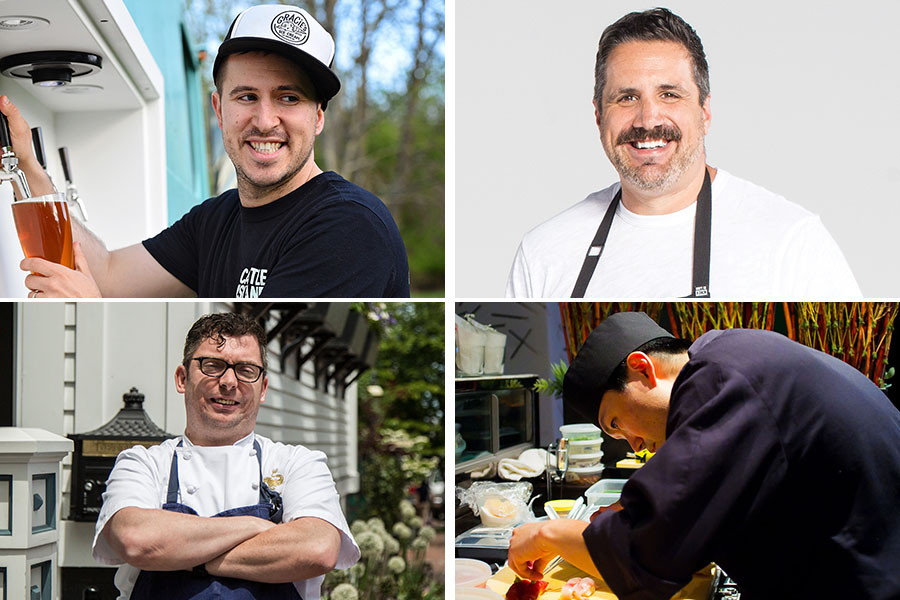 Sharing a meal and a nice bottle of wine with friends is most always the best way to spend an evening. A few restaurants are taking that idea to the next level this winter and launching new, recurring nights out with some of the best chefs from the Boston area and beyond, including Will Gilson, John Tesar, and more.

As a “culinary incubator,” this South End spot welcomes new talent into its kitchen every six months or so. Currently, chef Aaron Lhamon is holding things down with date-night tapas at Pareja every Monday-Saturday nights through February 17. To get a head start on choosing future culinary residents, though, Wink & Nod will open up select Sundays with this new series, beginning Sunday, Jan. 28, with Avi Shemtov’s Simcha. The Chubby Chickpea chef will have two seatings for a family-style feast of his modern Israeli cuisine, which he debuted in October with a month-long residency in Roslindale. Among his dishes are Moroccan cigars, filled with smoked brisket and Gorgonzola; smoked eggplant babaganouj; fried Brussels sprouts with tahini and an apple gastrique; charred octopus with pickled mango and green zhoug; whole-roasted cauliflower; pan-roasted red snapper, Chraime-style (spicy tomato sauce from Sephardic culture), and more. Check out the full menu on Eventbrite, where you can also reserve your seat.

The all-you-can-eat pasta-fest is a weekly draw, and now chef Douglass Williams and his team are sharing the fun. Beginning in February, the South End spot will welcome familiar faces in to its kitchen every month. Alden & Harlow, Waypoint, and soon, Longfellow master Michael Scelfo is heading over for the first collaboration on Monday, Feb. 5, and Puritan & Co.’s Will Gilson is there on February 12. #MangiaMonday always begins with a salad, then as many half-portions as you can eat of dishes like spaghetti cacio e pepe with foie gras, and rye cavatelli puttanesca. But for the guest stints, it won’t be limited to Italian-inflected cuisine—think Asian, German, “anything that celebrates the noodle in any way,” says general manager Seth Gerber. Hear, hear! Call for reservations.

Chef Chris Chung has thrown the menu out the window for omakase—“I’ll leave it up to you”—at his new Inman Square restaurant before—in fact, he has a late-night, three course option coming up this weekend. And he’s also had a friend over for this dinner party; after Journeyman closed but before he moved to Asia, chef Tru Lang collaborated on a menu there. But Chung is hoping to do that more regularly in 2018, beginning Monday, Feb. 5 with Yuji Iwakura. The chef at Snappy Kitchen, formerly of Uni and Basho, is opening up his own restaurant, Kamakura, later this year. At Momi Nonmi, the theme for the nine-course omakase is “Duet,” with Iwakura and Chung creating different dishes using the same ingredient—imagine surf clam sashimi, followed by a velouté made using the Massachusetts bivalve. Email info@mominonmi.com to reserve a seat.

Joshua Smith has rooted his charcuterie empire in Waltham, but the chef has been in the game for years at places like Dean & Deluca, and the Four Seasons in Boston. He’s also in the process of opening a Moody’s Deli in Napa, Calif.—as one does—so it’s no surprise he has friends coast-to-coast. He’s inviting them to Waltham for a new series, beginning Wednesday, Feb. 21, with chef Marcus Ware. A London native who’s cooked for decades at Michelin-starred restaurants, including Aureole on the Upper East Side, Ware now highlights local seafood and more as executive chef of the boutique Greydon House on Nantucket. His prix-fixe menu at Moody’s Backroom will showcase a progressive take on New England traditions, with cocktails nodding to the maritime history of Nantucket and optional wine pairings. Several additional dinners are on the books later this winter: On March 3, it’s Justin Brunson of Denver, Colo. group Brunson & Co.; March 6 brings four-time James Beard “Best Southwest Chef” semifinalist and Top Chef anti-villain John Tesar from Dallas; and Jonathan Benno comes to town from New York City on March 14. Follow Moody’s Backroom on Facebook for more details.