Drink This Now: Cellared Wines (and More) at La Bodega 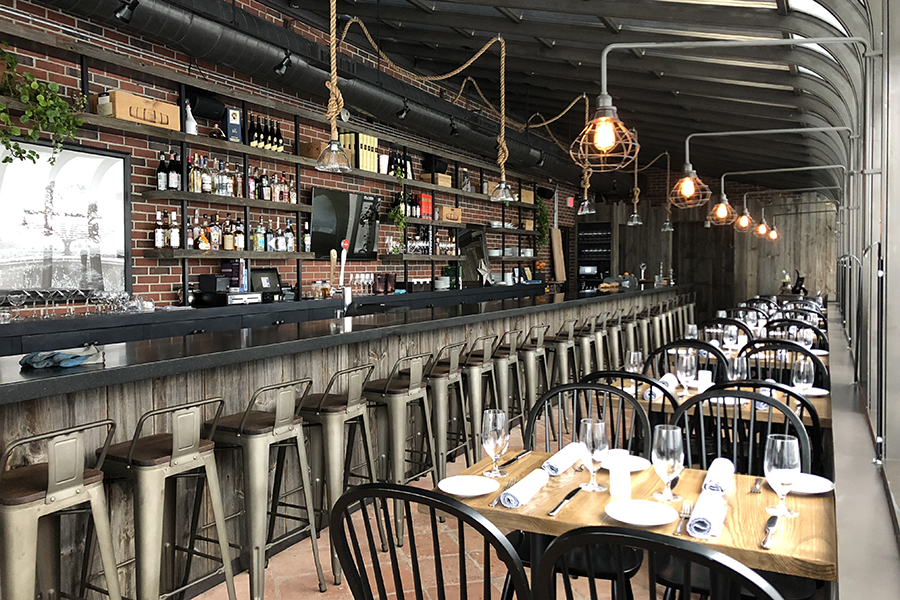 The bar at La Bodega. / Photo by Gabriel Bremer

It was a very tarnished glimmer of silver at the time, but a silver lining nonetheless.

Because their Cambridge restaurant, Salts, closed so unexpectedly in 2014, owners Gabriel Bremer and Analia Verolo were stocked with a full cellar of about 2,000 bottles of wine. Four full years later, they have a brand new restaurant in Watertown, and many of those bottles are drinking better than ever.

La Bodega has been quietly open since December with pintxos, a sturdy chivito, Salts’ beloved roast duck, and more on a daily menu—plus a large and unique wine list. Other early glimpses preview a bar program that will feature ciders and Spanish beers, sherries, vermouth, and Latin American-inspired cocktails.

“It’s something fun and unique to start off with, to give people an opportunity to try wines you just can’t find anymore,” Bremer says.

That includes many beautiful Bordeaux, like a 1989 grand cru from Chateau Lagrange, and a 2009 Gevrey-Chambertin premier cru from Domaine Claude Dugat; an Alsatian riesling from 2009, a 2000 Gewurztraminer, and more whites; several champagnes, American sparklers (including a 2001 J. Schram from Napa Valley), and even some vintage rosés.

“I know it sounds odd, but I have a very full-bodied, structured rosé from the Rhône Valley, with grenache and syrah. I think now it goes with the food even better than when it was fresh and bright,” Bremer says.

He’s also excited about several bottles of Tintilla de Rota, a rare red sherry, which Bodegas Lustau lists among its hardest-to-find releases. It hasn’t been bottled since 2001.

“I had it five years ago and I loved it and bought as much as I could, because I knew then it was hard to get, not knowing what the future held,” Bremer says.

Most wines are by the bottle, ranging from $40-about $280, with a couple $400+ outliers among the Champagnes. “But even wines I was doing by the glass [at Salts] have aged beautifully,” Bremer says. A 2010 Talley Vineyards pinot noir is among his choices on that list.

A friend in wine distribution housed the lot in a climate-controlled cellar for the past four years. As the collection is depleted, it remains to be seen what Bremer will—and can—replace. He’s currently working on bringing in more Uruguayan wines to showcase the main country of inspiration.

“I’m in for this to organically evolve,” Bremer says. “I’d love to continue having some vintage, cellared wines as part of it—especially with the name La Bodega.”

The rest of the beverage program is also evolving: La Bodega doesn’t yet have a set cocktail list, but bartenders talk with guests to mix drinks to their preferences. Among the likely featured drinks is a coupe of yerba mate. The earthy, green tea is commonly sipped from a hollowed-out gourd in Uruguay and other South American countries, but at La Bodega, it’s shaken with brandy and served up.

They’re also working on house infusions and cordials, and other ways to blur the lines between the kitchen and bar. The cold station is located behind the room-length bar, after all. In fact, the design of the space is as unique as the beverage program. Formerly a divey bar inside a former train car, Bremer and Verolo purchased the building and did a full-scale, gut renovation.

The bar spans one side of the room, with nods to the building’s former life as a train car in the form of train spike cabinet handles, and replica station scones above the bar tables. Near the bathrooms, a local metalworker installed a likeness of a famous piece of artwork by Uruguayan artist Joaquín Torres-García. On the other side of the wood-burning kitchen, cedar wood follows the rounded shape of the dining room ceiling.

“It feels like an old-school, vintage train car, but it’s also very fitting to the concept where you kind of feel like you’re inside a wine barrel,” Bremer says. He’s not wrong.

The buildout took more than a year, and presented even more challenges after the burst pipe and landlord problems that led to Salts’ untimely demise.

“We had to trust the process throughout, and ultimately, all the stumbling blocks put us toward a different direction that we ended up better than we originally planned,” Bremer says.

His wife and business partner chimes in, “This is true home.”