Haley.Henry Will Get a Sister Wine Bar in the Fenway

Larger than the Downtown Crossing gem, Nathálie will anchor the Fenway's tallest building with an equally focused wine program. 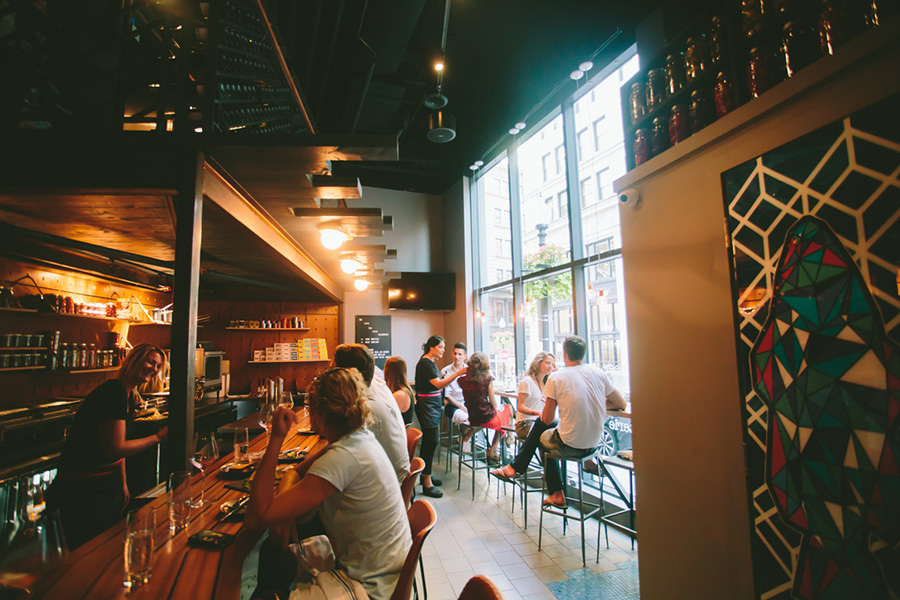 While the ship cabin-like, what-you-see-is-what-there-is atmosphere at Downtown Crossing’s Haley.Henry Wine Bar is a large part of the tiny spot’s charm, a big sister bar on the way to the burgeoning dining scene in the Fenway neighborhood is celebrated news. Nathálie (stylized as nathálie; eschewing capital letters like haley.henry does) is headed for the new Pierce Boston luxury condo building, on track for a summer 2018 debut.

Haley Fortier, a Sportello alum, debuted her European-inspired, tinned fished-focused wine bar in August 2015. The unique menu, produced behind the bar without open flames; the lively soundtrack and irreverent menus; and most importantly, the deep wine list made super-accessible with everything available by the half-bottle, quickly solidified Haley.Henry’s cool kid cred.

Nathálie will be a wine bar first, like Haley.Henry. But the two will be very different, Fortier says.

“People talk about [Haley.Henry’s] music all the time, how great it is to drink a really good glass of wine but listen to hip hop because it’s not really expected,” Fortier says. That’s the idea, she adds. The soundtrack comes from server Meghann Moran, aka DJ Le Marge, whose musical knowldge is as deep as her playlist skills. It remains to be seen if that’s the vibe Nathálie will go for.

“The spaces that we create, they have to really make a bold statement in order for them to be memorable,” Fortier says, noting that Haley.Henry general manager Kristie Weiss has been promoted to a managing partner. “I want it to be more feminine, edgy, sexy, independent. I want our guests to feel empowered and alive when they step in there.”

The name has a few different meanings to Fortier, but it also translates to “first daughter”—Haley.Henry’s first daughter. The new spot will have 50-60, rare, mainly Old World wines, with a focus on female producers. And like Haley.Henry, it won’t have a full kitchen or any live-fire cooking. But Nathálie won’t have tinned fish.

“We’re still trying to figure out what some of that cuisine is going to be like, but it’s built around really fun bar food from all over. We’re not boxing ourselves into a type of cuisine, but but things you think about when you’re in a wine bar in Europe,” Fortier says.

And it will have a little bit of room for guests to hang out outside. The Pierce space includes a 200 square foot patio, which Fortier is imagining right now as a standing bar area with a drink rail.

“Some of our challenges now with Haley.Henry is we are so small and we go on a wait often,” Fortier says. They often encourage guests to check out the dive bar glory that is the Hub Pub across the street, she says. But the patio will allow guests to wait for a spot at Nathálie and have a drink on premises.

Inside, covering just more than 1,100 square feet, there will be a bar, a counter with window seats, and high-top seating, plus a lounge area with banquettes and multiple tables. Alina Wolhardt of Wolf in Sheep Design is helping create the vision.

Construction is expected to start in March, and Fortier is hopeful for an eight-week buildout and a June 2018 opening. Follow along with @nathaliewinebar on Instagram.