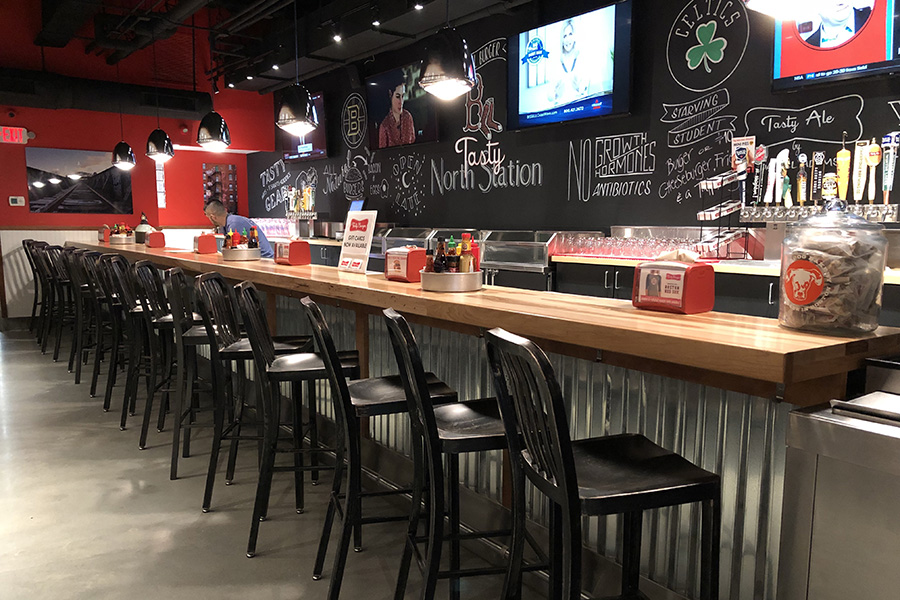 If you’re headed to the Bruins game on Tuesday night, you could pre-game at Tasty Burger’s largest bar. The Massachusetts chain opens its fifth local location (and sixth overall) at North Station today, with an 18-seat bar and an adjacent, additional 18-seat drink rail.

If you’re not going to the Bruins game, you could certainly post up to watch at Tasty—there are four large TVs in the bar area, and an ever-rotating selection of beer and wine. To start, there’s Tasty Ale, of course, the house brew from Boston Beer Co.; Night Shift Whirlpool, Sam Adams Winter Lager, and more.

The dining menu is the same as the other local Tasty Burger outposts—burgers include the go-to Big Tasty, with American cheese, lettuce, tomato, pickle, onion, and Tasty sauce; plus the spicy jalapeño; the gorgonzola with bacon; the Rise ‘n Shine, with a hash brown and a fried egg, and more, including a vegetarian patty, and the chipotle-slicked turkey burger. Tasty Burger plans to continue its Chef Burgers of Boston series this spring as well, which launched in November with Townsman chef Matthew Jennings.

Besides the non-GMO burgers, there are all-beef hot dogs, chicken nuggets and chicken sandwiches, tots, onion strings, fries, and a salad, plus meal deals, like the $10 Starvin’ Student (complete with a tallboy). Soft drinks include the signature house-made lime rickey, Cheerwine, and 16-ounce shakes.

The new spot is located on the ground level of the new Avalon North Station residences, and has two entrances accessible from a pedestrian walkway, including one opposite the west entrance of the TD Garden. There’s a takeout window there for commuters heading to catch a train—your fellow passengers (read: the author) kindly ask you to please keep fast food on the platform or in the café car, though. Besides the bar area, the dining room seats 74 at large booths, smaller tables, and another seating counter.

Tasty Burger opened its first location outside greater Boston in Washington, D.C., in 2015. The original is situated in the shadow of Fenway Park, and it has since expanded to Harvard Square, South Boston, and Back Bay Station, and is also available inside the ballpark. A short-lived Dudley Square location shuttered at the end of 2017. Tasty is the brainchild of David DuBois of the Franklin Restaurant Group, who also operates the Franklin Café, the Citizen Public House, and the brand-new Our Father’s delicatessen and restaurant in Allston.