A pescetarian nostalgia trip with a welcome dash of 21st-century resonance—plus a floundering bar downstairs. 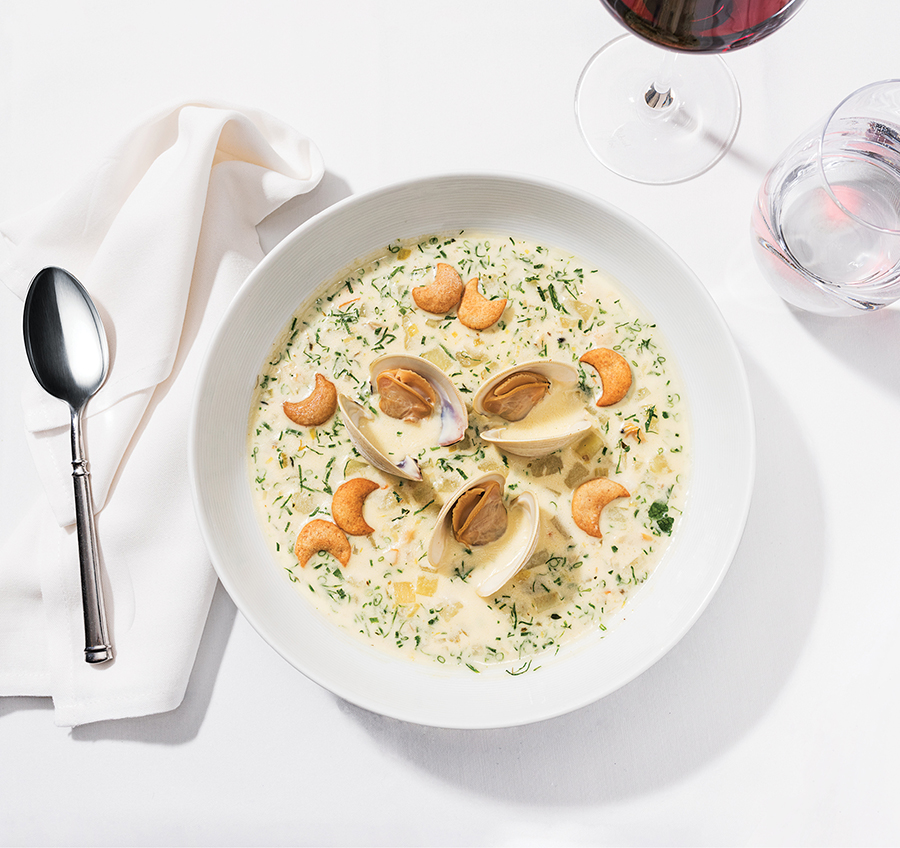 There’s one thing visitors crave the moment they step foot in our fair city: “someplace good for seafood.” It doesn’t matter if they’re landlocked conventioneers, adventurers from New York City, or Billerican urban pilgrims; they are here to earn that culinary badge. Mention that Bostonians don’t really go to fish-themed restaurants for great fish anymore—and try to steer them toward “coastally inspired” Waypoint, say—and they will nod politely but remain steeled. Usually, I’ll simply send them to Select Oyster Bar or Row 34, where they’ll be happy as a whole-belly clam.

Now that I’ve been to Mooncusser Fish House, however, I’m considering fine-tuning my advisory gambit. From the crew behind Concord’s acclaimed 80 Thoreau, Mooncusser posits an alternative to the updated shellfish shack: its cousin, the apotheosis of ye olde New England fish house. I suspect this is closer to what half the folks I funnel over to Select are craving. Tucked into the top floor of that funny mini Flatiron Building at Stuart and Columbus—I will save my thoughts on Moon Bar, the wine-tavern-ish identity crisis on the ground floor, for later—the main dining room nails the platonic ideal with stylish panache: It’s cozy and intimate (60 seats), with dark wood and white tablecloths and little else, harking back to the sort of indie seaside-inn restaurant Gourmet magazine would have kvelled over during the ’90s. Chef Carolyn Johnson’s straightforward menu, too, hits the mark in its forthright celebration of local catch—no Alaskan halibut here. There are no snacks or pasta midcourses, either. There are seven appetizers and eight entrees.

Remember appetizers? I mean those built-for-one entree precursors we used to eat before chefs decided every dish should be shared. You might hesitate to order a dish like Johnson’s luscious macomber turnip soup ($14) with poached oyster and pear cream: so unshareable, so selfish. Get the soup. Screw the rest of the table. The world is your oyster. Your oyster.

My favorite Mooncusser appetizer to hoard is the charry seared gnocchi ($17) with uni, chanterelles, and mustard greens, the plumped-out, crisped lobes of pillowy sea urchin set against the goldenrod-yellow ooze of hollandaise. Seafood chowder ($12), bulked up with smoked scallops, skate, potato, half-moon oyster crackers, and big, briny clams in the shell, finessed a diplomatic path between the milky lightness purists favor and back-of-the-spoon-coating hedonism. The thick parallel lines of pudding-textured sauce garnishing beautiful hand-chopped tuna tartare ($16) turned out to be sieved foie gras “ganache,” for dragging morsels of fish and fresh semolina crackers through, though the prune and hazelnuts took things dangerously far into PB&J territory. 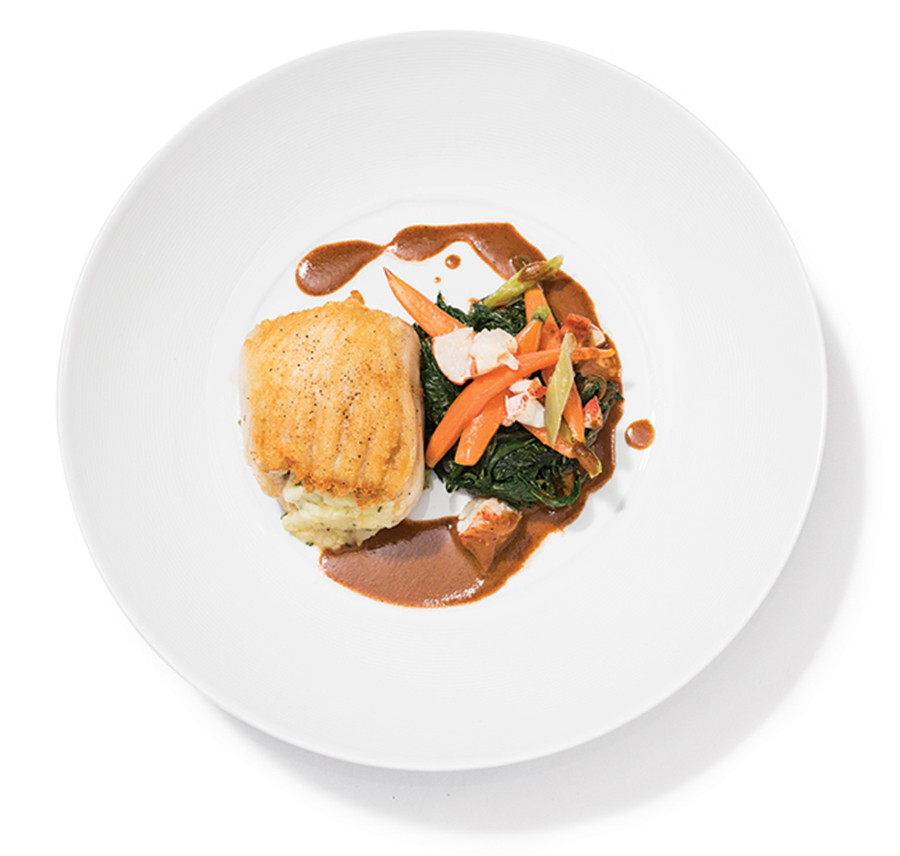 Johnson’s cooking style is nuanced and precise and embodies a refreshing restraint. She isn’t a showoff. Aliens stumbling across this menu in a hundred years will mistakenly categorize it as French, but it isn’t quite. It’s a very specific New England variant that is anchored in French only because that’s what professional culinary schools teach. It is the fish-cookery equivalent of not painting over natural wood, letting the grain show through.

Grilled whole scup ($30–$40), a local porgy with mild white flesh, dared to show up naked but for a scanty bright-green sash of bracing salsa verde and a spot of wild rice. Seared monkfish ($35) was about the monkfish. The melted bitterness of braised fennel and the faint licorice tinge of a tarragon-perfumed, aioli-bolstered bourride filled out the harmonies with gentle complexity—gorgeous but subtle, like good piano accompaniment that lets the soloist stay front and center. On occasion, I found Johnson’s sleight-of-hand too slight. A slab of grilled tuna ($40) with beets, apple, and bacon was lovely, really! But my mind started wandering halfway in.

One night, I cued up a potato-stuffed skate ($30) I’d seen roll by practically begging for a little old-fashioned tire kicking. The dish was a veritable gauntlet of texture and seasoning traps. Let’s see…delicate swath of fish sporting aggressive display-side burnish? Check. Decorative baby carrots of different sizes, braised chard, an inch-plus-thick mound of mashed, and a sauce américaine the color of a melted Tootsie Roll: What could possibly go wrong? Not a blasted thing. The execution was flawless, yet the technique faded demurely into the background so that all I remembered was the play of the skate’s brown-buttery, sole-meunière-style nuttiness against the sweet richness that makes people call it “poor man’s scallops.”

Desserts by pastry chef Katherine Hamilburg followed suit with spruced-up riffs on patisserie workhorses, like airy French macarons ($12) with delicate sea-salt-caramel shingles that cave in to a luscious bright-plum mortar. Light, buoyant, exactly enough. Service was gracious and precise, though I somehow ended up with the same server three times. What can I say? She knew her stuff. Mooncusser also has one of the loveliest new wine lists on the scene, and if you’re the sort of diner who takes pleasure in ordering wine at restaurants, you’re in excellent hands with co-owners Vincent Vela and Ian Calhoun, who combine deep knowledge, a passion for cool Teutonic bottlings, and an uncanny ability to read the table.

Which makes the glaring blind spot that is the ground-floor Moon Bar all the more puzzling. The place can feel as desolate as an Edward Hopper nightscape. This casual launch pad for the main restaurant has one of the best glass-pour lists in town, but very few food items you’d think of drinking a glass with. It doesn’t even serve raw oysters, if you can believe it. Nothing against pork souvlaki ($17) or mussel tartine ($8). But when you’re dispensing serious Jura crémant from a triangular bar this close to Park Square and you’ve got a name like Mooncusser—which technically means “land-based night pirate” but 100 percent reads as oyster variety—it feels like a bait and switch. Figuring out the first-floor concept could be key to Mooncusser’s survival. I wonder how many people have stopped in downstairs, glanced around, and departed without an inkling there’s an exquisitely polished three-star gem hiding in the attic. 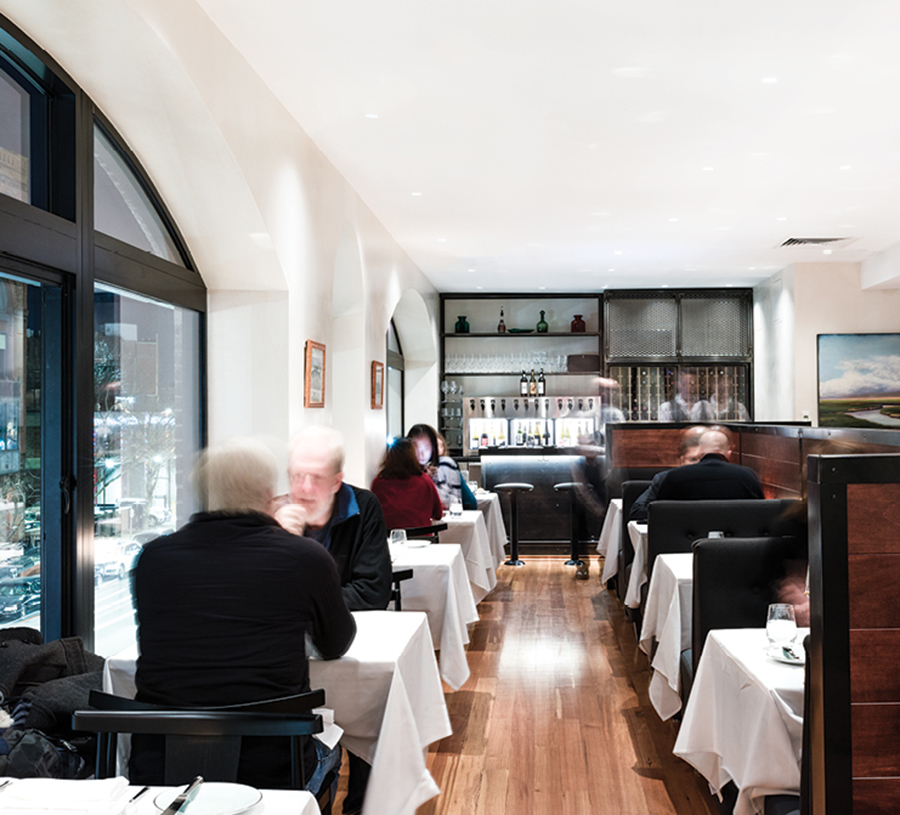