Two more locations are coming in 2018. 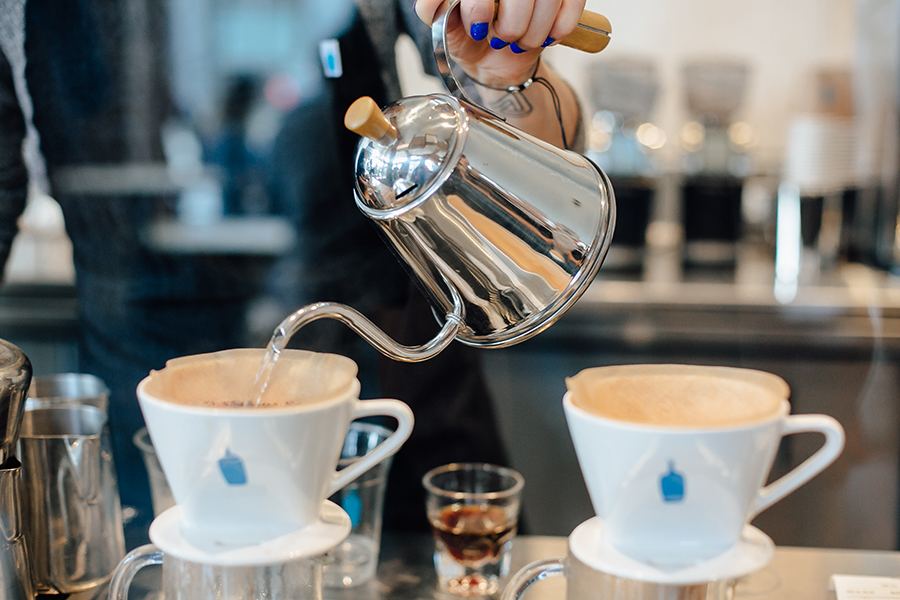 A bright and modern new coffee shop for the Harvard Square crowd arrives this weekend. Blue Bottle Coffee officially debuts in Massachusetts on Saturday, Feb. 3, with a community day on Friday in support of Artists for Humanity. From 9 a.m.-3 p.m. today, check out the new Bow Street café for a free cup of coffee, with all food and merchandise sales going to the non-profit that gives young people employment opportunities in creative fields.

The ~1,400-square foot café seats about 22, Eater Boston reports, with seats along three walls of windows. Blue Bottle’s beans are roasted daily in a new facility in Bushwick, which is why the company is able to expand into Massachusetts: Blue Bottle vows to sell coffee within 48 hours of roasting, “so you can experience our coffee at the absolute summit of deliciousness.”

At the shop, it serves single-origin and coffee blends, as well as espresso, cold brew, and New Orleans-style iced coffee. It has liège wafels, toasts, and grab-and-go food offerings, and also sells beans, brewing equipment, and other swag.

Blue Bottle, which started in the Bay Area in 2002, has about 50 locations in California, New York, Washington D.C., Miami, and Tokyo, and has a couple more cafés on the way to Boston this year. It’s headed for a space inside the Prudential Center, as well as one at 100 Federal St. in downtown Boston.

The company started its Massachusetts expansion plans in 2016. In September 2017, it announced industry giant Nestlé bought a majority stake in Blue Bottle. Eater reported the $500 million sale helps Blue Bottle continue to grow both in the U.S. and internationally, invest in new coffee technology, and expand its retail offerings.

Coffee education classes on brewing techniques and bean varietals are in the plans for Blue Bottle’s newest city. “We were inspired to make our way to Boston due to its rich history and thriving academic communities, and Harvard Square is the ideal location for our first cafe,” CEO Bryan Meehan said in a press release. “The city’s coffee scene has been gaining momentum over the past few years, and we’re looking forward to joining the community and sharing our passion for thoughtfully sourced, freshly-roasted coffee beans with locals and visitors alike.”