Q&A: Frank McClelland On the Original Farm-to-Table, Why Anger Is Bad for Food, and 40 Years of L’Espalier

The chef also dishes on why he doesn't consider the restaurant 'fine dining,' #metoo in kitchens, L'Espalier's future, and more. 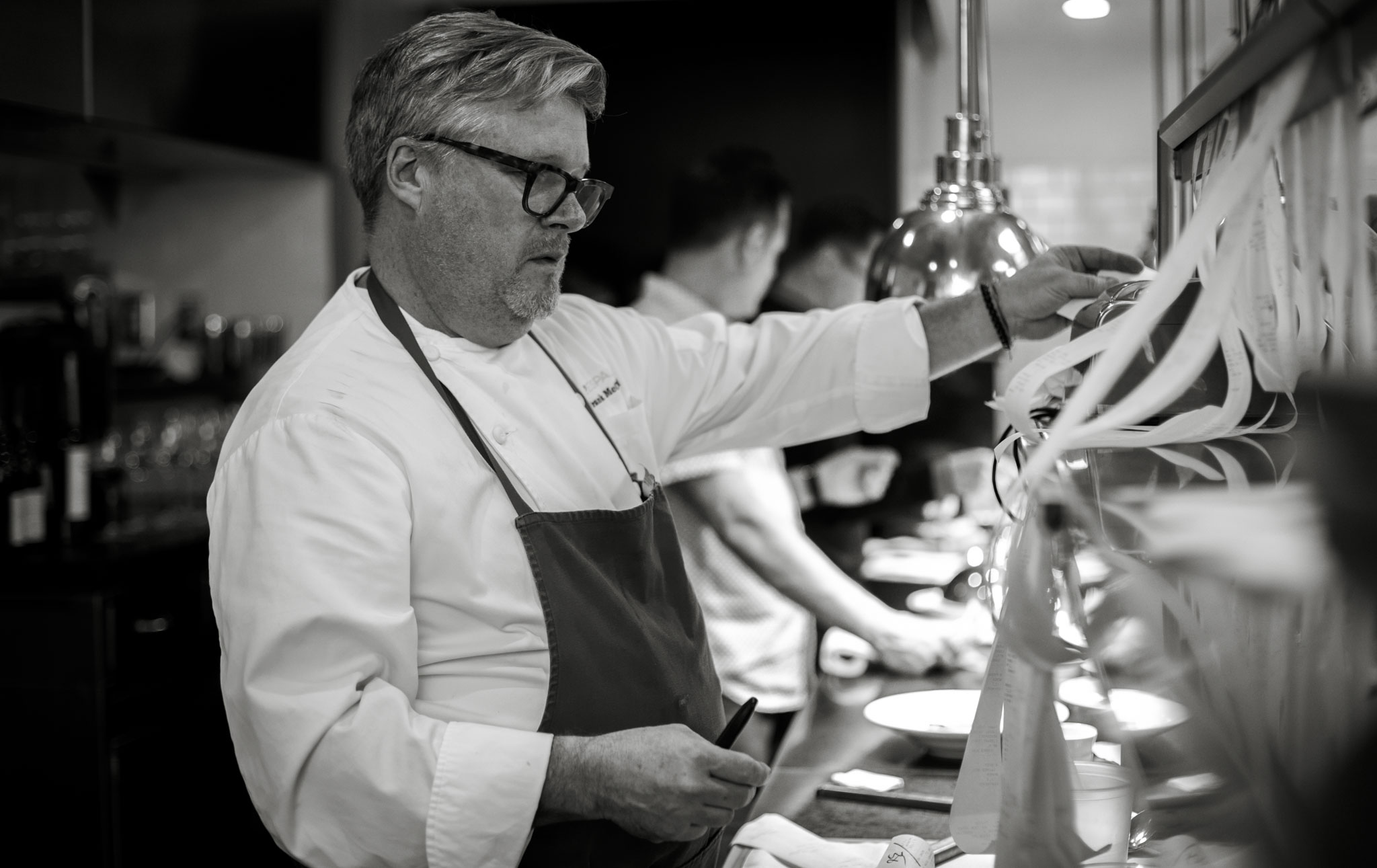 In this era of cutthroat competition and rapid-fire re-branding, it’s noteworthy if a restaurant is still around after five years, let alone forty. So L’Espalier chef-owner Frank McClelland certainly had a lot to celebrate—over a massive baked Alaska, no less—at the restaurant’s recent fortieth anniversary dinner.

The event drew about 35 of the restaurant’s former cooks back into the kitchen for a one-night reunion. Chefs who’ve honed their skills in the space include La Brasa’s Daniel Bojorquez, Asta’s Alex Crabb, and former Tavern Road proprietor Louis DiBiccari, all of whom trained for years under McClelland before moving on to run their own kitchens.

And it gets even sweeter: This year actually marks a double birthday for the refined Back Bay restaurant, as McClelland purchased it from its original owners, Moncef Meddeb and Donna Doll, 30 years ago, in 1988. At 61, the chef—and father of five kids, ages 6 to 26—swears he’s still as hands-on as ever. We caught up with him to discuss the landmark occasion, and more.

Congratulations on 40 years of L’Espalier. Wow, what an accomplishment.

Yeah, I get no respect.

I get no respect. How do you maintain a place like this at such a high level, right?

Well, that’s one of the things I’d like to talk to you about. What do you think have been some of the keys to the restaurant’s success?

I’ve never had a general manager because I’m always here. And I think just being so hands on. I built it like a school. So with everyone I hired, especially in the kitchen, there was the thought that I’m training you to be a chef, and I actually did that for many, many people. So, I guess retention rate is important. In my tenure, 30 years, I’m only on my fifth or sixth generation of brigades [cooks]. They usually last as a group for five years.

Given Boston’s cooks shortage, five years seems like quite a while. Do you ask them for a commitment?

No, absolutely not. Back to the school idea, I work them through all the stations. I give them managerial responsibilities. I’m very open. I’m just a cog in the wheel. I’m receptive to everyone’s ideas, and I stay young because of that energy. I’m here on a nightly basis, in the kitchen. Like, tonight I’m right on the line. The whole menu is constructed by the team, with me tweaking and saying yes, what if we do that. It’s an adrenaline rush for everyone, not just for me. They learn to think like I do.

So, how do you think? 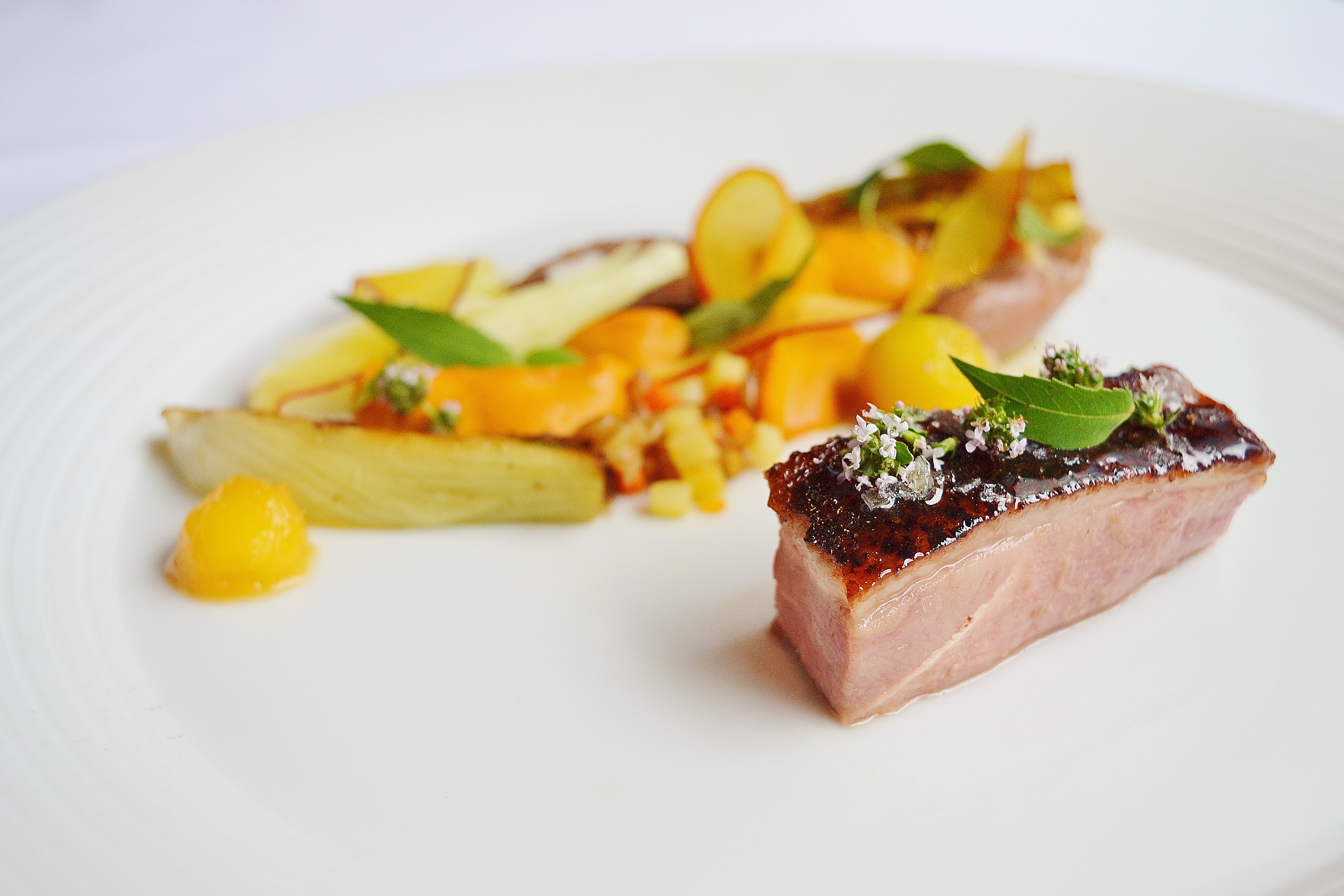 McClelland grows vegetables for the restaurant in his own backyard. / Photo by Rebekah Jackson

Farm-to-table cooking is so ubiquitous now, we’ve come to take it for granted. But you’ve been doing this for more than three decades.

That’s my point—I’ve been doing it for almost 40 years. Way back before it was even thought of, and so my love affair with farming and farms and respect for them went way back to when I grew up in New Hampshire. In 1984, I went out to the Country Inn, in Princeton, and developed my own cuisine, which was farm-to-table New England.

Were you following what Alice Waters was doing at the time with farm-to-table cooking on the West Coast?

No, I was independent of that. It’s so weird. I’ve never said this to anyone, I was almost like the East Coast version of what she was doing. But I don’t like to talk too much about that. I like to live in the moment. Like, I don’t read anything that’s written about me. 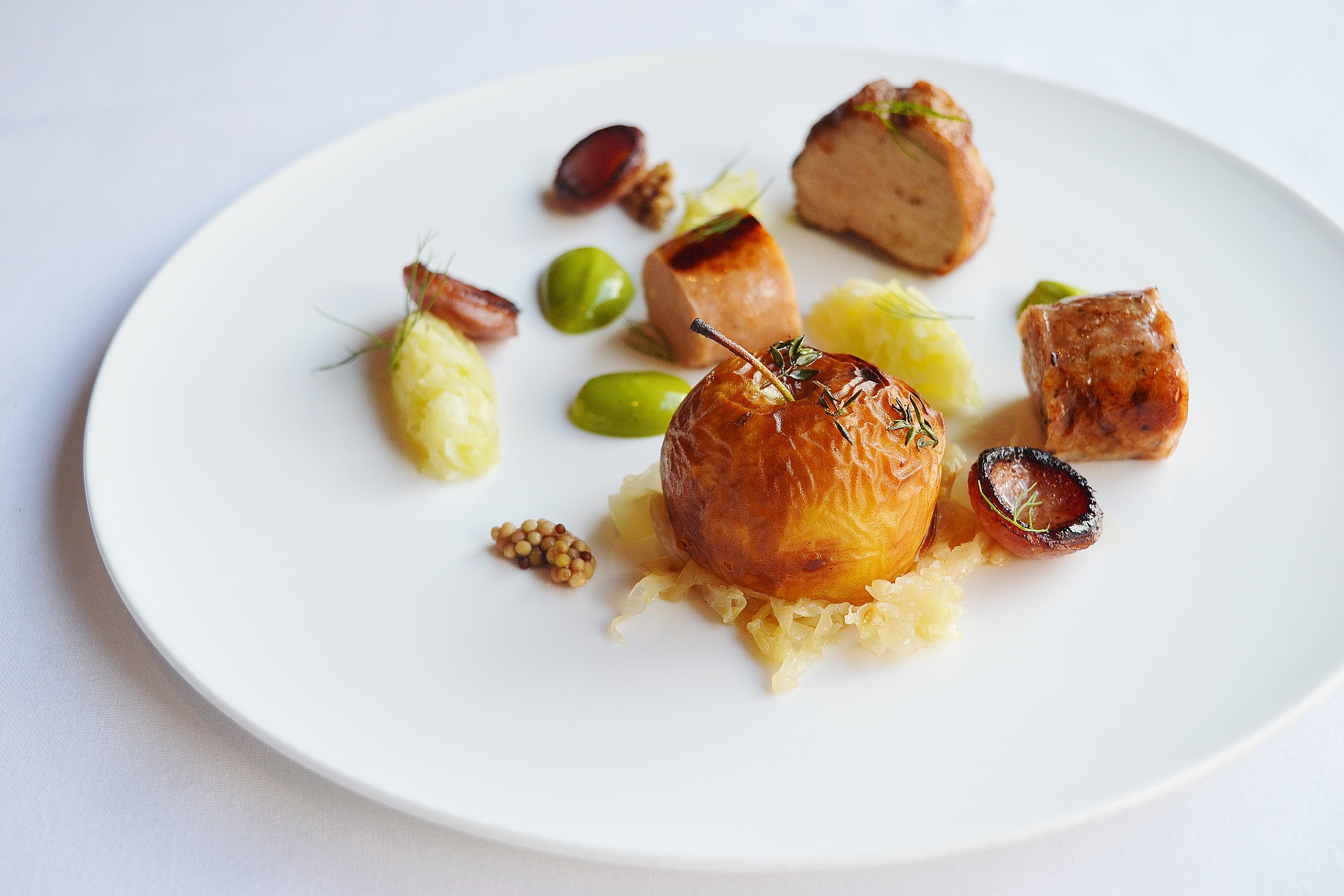 What about Yelp reviews?

Well, yes, I do read those. We collate them. I have someone who picks 30 each week. And I only read the negatives.

Do you actually make changes based on the feedback?

Absolutely. My whole thing is evolving every day. Getting better. So I don’t really have signature dishes.

There are now many more “casual” chef-driven restaurants than there were 40 years ago. Have you taken any steps in recent years to make your restaurant feel less formal?

Wow, that’s less than I would have thought.

There are a lot of myths about fine dining. Like it’s pigeonholed. We do refined menus and tasting menus, and you can come as you want. We want to take you on a journey. Like a cruise. I guess I don’t even really call L’Espalier fine dining. You can call it high-flying cuisine of New England.

It was a big deal when you moved the restaurant in 2008 from the beloved Gloucester Street townhouse to your current location on Boylston Street. Looking back now, do you ever regret that decision?

Friends, family, guests, everyone wanted to murder me. We probably lost a third of our guests because they were so mad. But no, I don’t regret it. I wanted to make it more modern. More accessible. More relaxed. I loved the townhouse, but it became almost stodgy to me. The move actually ended up increasing our business.

Throughout the course of your career, we’ve all seen the growth of the “celebrity chef.” But you’ve seemed to mostly stay out of that. Was that intentional?

Yeah, I don’t believe in all that drama. It’s great for other chefs. They can take it and run with it. But I do love what it’s done to children. They know so much about food because of these cooking shows. My kids watch the junior cook-offs, and I watch them with them. The shows tend to give a false narrative of what a kitchen really is though.

That there’s lots of screaming and yelling in a restaurant kitchen. It’s actually so quiet. Part of it is that [anger is] bad energy for the food. Because the cooks get tight, and I don’t want that.

Speaking of kitchen culture, what’s your reaction to the recent spate of chef-restaurateurs who have been accused of sexual misconduct in the workplace?

That’s really a tricky thing these days. I just know that in my kitchen, I won’t tolerate one single second of harassment of any kind.  I’ve always had both genders in my kitchen. Right now, it’s probably 30 to 35 percent women. I always say that a restaurant rots from the head down. I have three daughters. And I’ve gone through my entire 40-year career unscathed personally, and in the restaurant until maybe a couple years ago. I do have a case, and it’s still pending, between two employees. It was unsettling, but I did everything by the book, including bringing in an independent HR person.

But I can’t comment on any specific cases. I think for the most part, it’s a really good thing because it’s going to change our culture. With that said, I think there are some people who are going to get dragged out for false testimonies. That’s just part and parcel of the cultural revolution we’re going through right now.

You mentioned earlier that you don’t think you have signature dishes. So, then what do you think is the best thing you’ve ever served?

I’ve said that ten thousand times about ten thousand different things. But if I had to pick one thing, it’s the perfect asparagus that I grew at my farm, cut in the dew of the morning, brought in here, cooked, and then put on a plate with whatever. It all goes back to the perfection of ingredients. 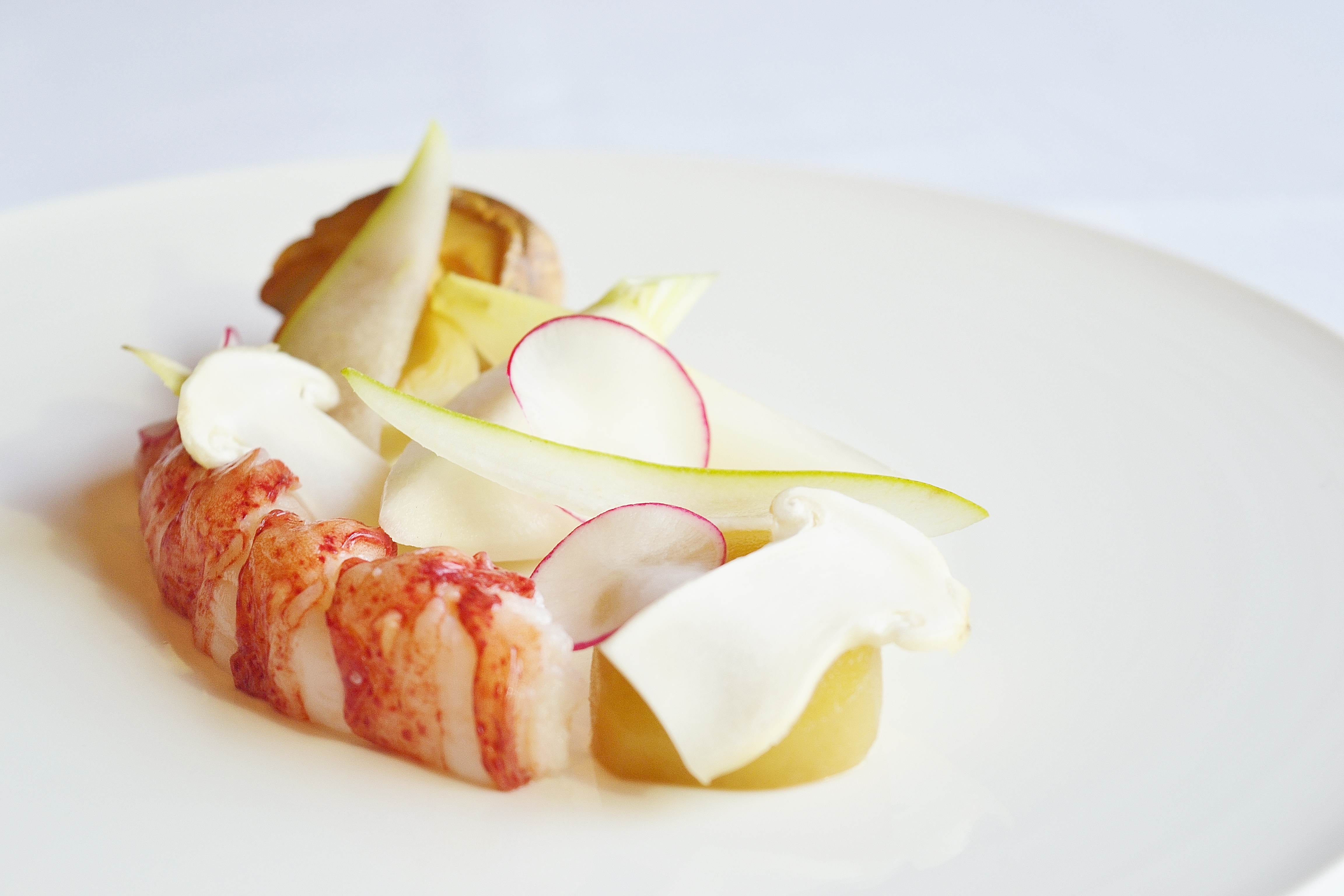 Do you have any favorite L’Espalier memories so far?

A lot of stuff I don’t want in print. Like some wild parties. I’ve had to break up some fights, believe it or not. But in all honesty, the thrill of meeting and cooking for James Beard and Julia Child.

When you’re not working, where do you like to dine in Boston?

La Brasa and Asta. I actually hang out at both all the time. And I cook a lot at home, too. I’m like a machine—I can clean everything really quickly. Cleaning a kitchen is almost like a meditation for me. My kids are always starving and ask, ‘how quick can you do dinner, Dad’? We’re going to time you, and they egg me on.

At 61, many people are thinking about retiring. Do you think you will retire soon?

I have no plans to retire. I just can’t. But I can’t vouch for L’Espalier being here in ten years.

Note: Interview has been condensed and edited. 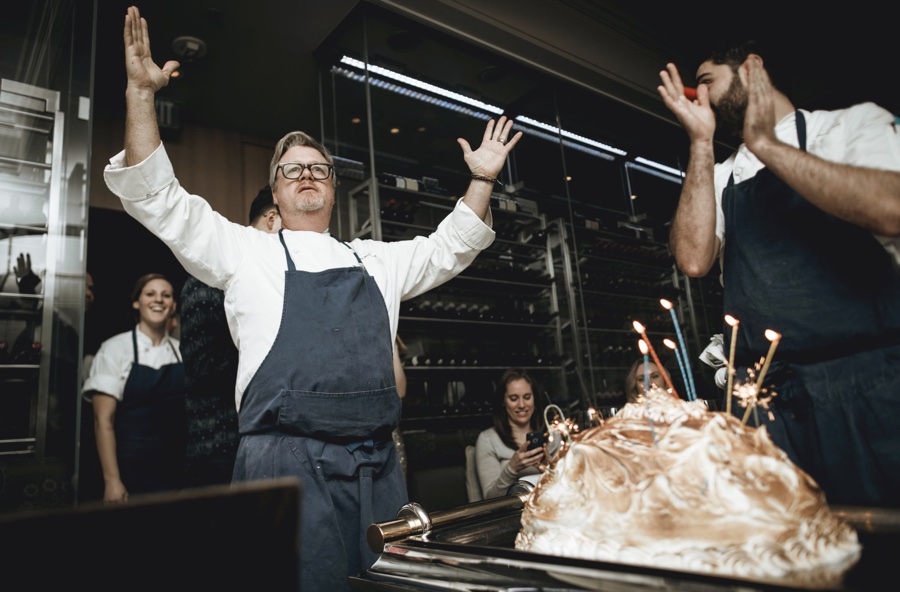