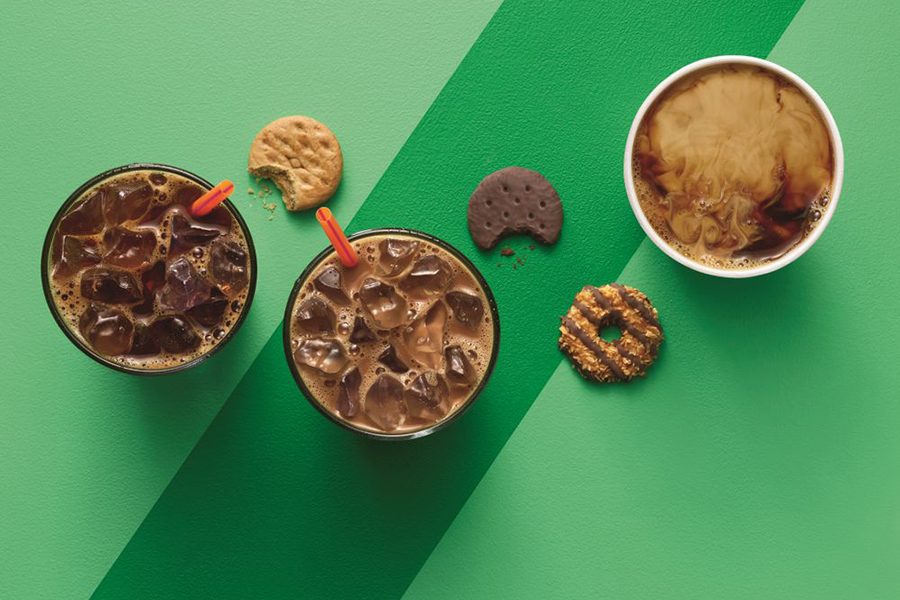 The Girl Scouts have promoted courage, confidence, and character since 1912, but now, the organization is adding another “c” to its roster of values: caffeine.

On Monday, Dunkin’ Donuts debuted three new coffee flavors inspired by beloved Girl Scout Cookies. Thin Mints, Coconut Caramel, and Peanut Butter cookies are all getting the DD treatment, as the Canton-based chain transforms them into lattes, macchiatos, and, of course, hot and iced coffees.

The trio will be on tap through May, according to a press release, and Girl Scouts will also be selling cookies at various Dunkin’ outposts for the next three weekends—after all, nothing goes with a cup of Thin Mint coffee quite like the real thing. And we’re all just looking for an excuse to eat cookies for breakfast, right?

Dunkin’ is no stranger to food-flavored drinks, but the Girl Scouts partnership is the chain’s first foray into peanut butter. The sticky spread may not seem ripe for liquid form, but if anyone can turn jelly’s better half into a delicious beverage, it’s definitely Dunkin’. Elsewhere on the menu, the new Coconut Caramel options will be like drinking a Samoa, with flavors of toasted coconut and creamy caramel. And if a McDonalds Shamrock Shake doesn’t quite do it for you, the fresh taste of a Thin Mint frozen coffee just might.

According to the Girl Scouts and also how much we want to eat them right now, the three flavors are among the most popular cookies on the organization’s roster. The more than 1 million Girl Scouts who participate in cookie sales each year bring in roughly $800 million annually, according to a press release, with all of the money staying within local Girl Scout councils. All those cookie stands waiting at the top of T stop escalators to greet weary commuters are apparently just as effective as you’d imagined they were.

Dunkin’ leaders said the partnership with Girl Scouts makes a lot of sense for them.

“Our guests have come to expect and enjoy fun, innovative flavors from us, and what could elicit more smiles than the iconic taste of Girl Scout Cookie-inspired flavors in your favorite Dunkin’ Donuts coffee,” Patty Healy, Dunkin’s senior marketing director, said in a press release. “It’s a natural fit and a powerful combination.”