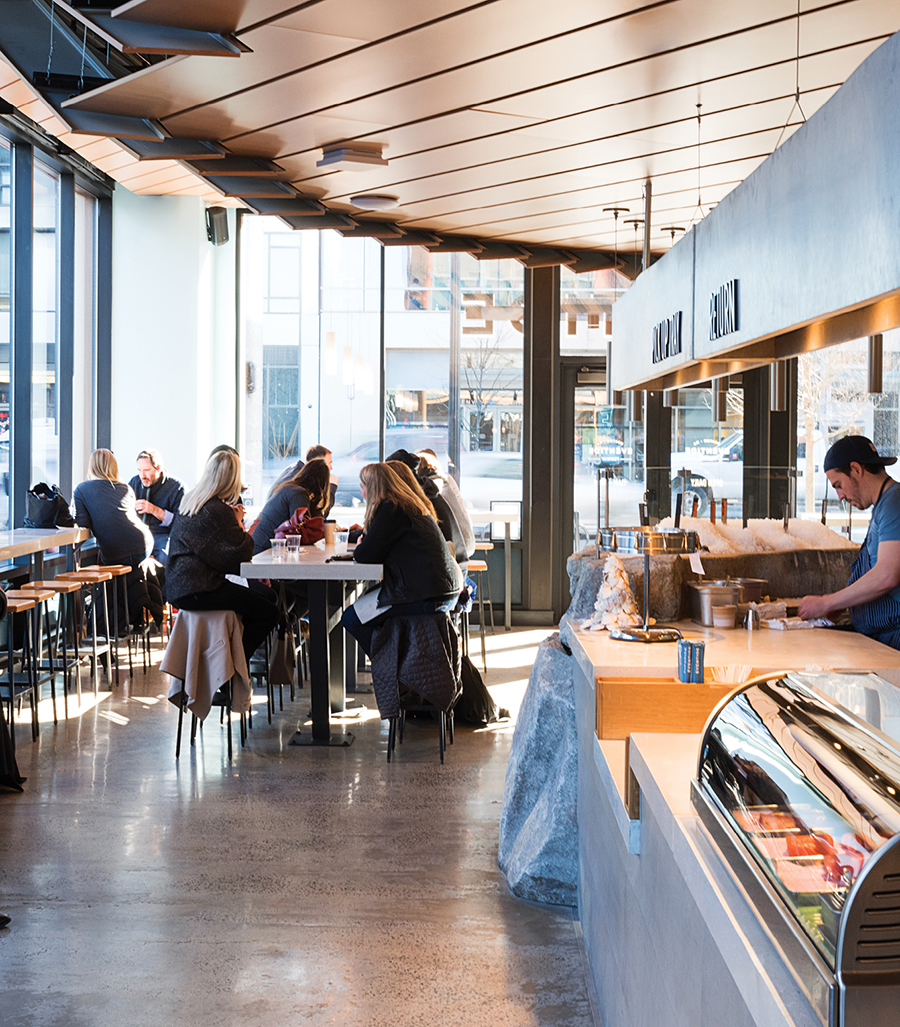 I am not a fan of the famous hot, lemony brown-butter lobster roll ($19) at Eventide Fenway, the fast-casual spinoff of Andrew Taylor and Mike Wiley’s roundly beloved, critically worshipped Eventide Oyster Co. in Portland, Maine. There, I said it. It feels…freeing.

I’ll concede the gimmick—swapping the traditional split-top hot dog bun for a fluffy Chinese bao—is pretty slick, but I find the double-squish texture less than ideal. It also violates the first law of steamed-bun functionality, which states that a bao, properly deployed, serves first and foremost as a buffer: a mitigating foil to the intensity of its filling. The salty-sweet richness of hoisin-slathered pork belly, say, or the hot-brine-spurting danger of fried soft-shell crab. The filling, in other words, has to need the bao. Which buttery chunks of lobster do not.

Just in case you think I’ve got it all wrong—a dissenting view shared by the fringy likes of Bon Appétit, Saveur, Food & Wine, USA Today, the Wall Street Journal, the Globe’s two best food writers, and five out of five Boston staffers surveyed, all of whom claim Eventide’s decapod-crustacean signature not only swam in but walks on water—there’s a pragmatic reason to skip it, too. This $19 lobster puff is bigger than the Portland original and, thus, comes with a high risk that you’ll end up too full (or financially invested) to tour the menu’s stronger sections. A phenomenon known, in some circles, as “getting Neptuned.”

Will you still have room for the masterful crudos, which sparkle with pinpoint precision? Blushing swatches of cool, velvety tuna ($12) arrived dressed to the nines in salty-sweet Japanese tare, cleansing bits of radish, and an oiled-up smattering of gingery scallions. The crisply articulated bursts of soy, mirin, and bright-green allium recontextualized the fish’s natural iron-y flavors as intriguing complexity. Was salmon crudo ($13) lavished with scallion-tofu purée, furikake crunchies, and floral-citrus yuzu kosho chili paste even better? Maybe so. I promise to retry them side by side, over and over again, and get back to you. Swap out the compostable plates for bespoke pottery, and you could sneak them onto an O Ya omakase.

Chef-owners Taylor and Wiley met in 2010 in the kitchen of Portland fine-dining spot Hugo’s, which they teamed up with GM-owner Arlin Smith to purchase in 2012, the same year they opened Eventide Oyster Co. next door. Eventide Fenway forgoes the original’s sit-down-restaurant trappings but preserves much of the menu’s winning high/low formula: Take a standard clam-shack recipe, chef it up gently but surely with solid technique and fussy sourcing, then swap out one component (maybe two) with a foodie flourish. The Eventide Cheeseburger ($12) reads as a regular burger. It’s got a griddled patty, American cheese, iceberg lettuce…so far, so good. But then gochujang-tallow mayo, in one fell schmear, tweaks the semiotic signal, dog-whistling to adventurous eaters that someone in the kitchen gets it, that maybe even the non-bedazzled pickled onions will be next-level, too. (They were.) Yet it’s subtle enough not to rattle the gastronomically fearful. A fried-chicken sandwich ($12) came with cabbage and pickles…and maple-sweetened Chinese mustard. And so on. 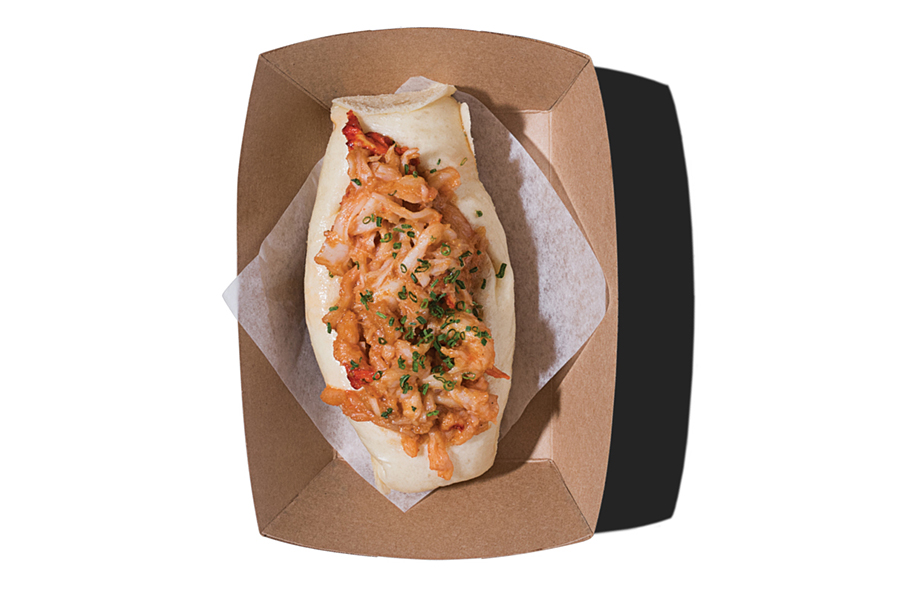 A deep roster of daily specials went farther afield, but never too far. Griddle-charred cauliflower ($11) was dotted with XO sauce made with maitake mushrooms and brightened with hot-pink supremes of grapefruit. Grilled octopus skewers ($14) rocked apple, scallions, and porky salt potatoes: Galician-style tapas on a portable stick. Besides the crudos, these half-dozen or so envelope-pushing inventions were the menu’s strong suit—which is a ton of star power concentrated under Daily Specials for something meant to be replicated in multiple locations. Eventide Fenway’s got all the signifiers associated with the Sweetgreens of the world—the backlit menu, the cash register, the woke-chic biodegradable forks—but it’s more like an ambitious small-plates gastropub in fast-casual drag. Fascinating twist, if they can pull it off.

Which brings us to the burning question: How does Fenway square up with Portland? Nicely done, overall. But it’s a different animal. Like a movie version of a beloved book, where they did a bang-up job distilling the magic, given the medium’s constraints. You’d recommend it! It’s the Gone Girl of adaptations. But that doesn’t mean you don’t quietly mourn the scraps on the cutting-room floor. National-caliber plated entrées, say. Polished tableside service. The curatorial bravura of a cellar bursting with upper-tier rieslings.

Random quibbles: There were temperature/timing problems, particularly with fried food, which showed up lukewarm sometimes. The wan, vegetal kimchi ($4) could use tweaking. On the service side, a few extra details about the daily oyster offerings would be helpful: If Fenway gets the Portland-size lines they’re counting on come Sox season, relying on hand-selling at the register, when the pressure’s on to negotiate a hard-to-sight-read menu, feels like a recipe for gridlock. We need just a few guideposts on basic parameters such as flavor profile, size, and (ahem) salinity.

Speaking of which: Lobster stew ($16), intense and gorgeously supple with its full-extraction broth and green-curry inflections, was too salty. A little gem salad with smoked salmon ($12) was delicious but overdressed. And too salty. The XO scallop ($14), the Eventide Cheeseburger, the nori-dusted potato chips ($4): too salty, too salty, too salty. As anyone who has clutched a water glass for dear life at my dinner parties will attest, I have superhuman sodium tolerance. I think they need to dial it back.

Desserts were consistently on point, both in terms of execution and their articulate evocation of Eventide Fenway’s conceptual theme: summertime nostalgia, color-corrected with clear-eyed precision. No way family trips along the coast ever tasted this good. Oatmeal cream pie ($4), warm and buttery, was the apotheosis of my favorite Little Debbie snack cake growing up. For death-by-cookie-dough types, though, it would be hard to beat the brown-butter soft-serve ($6), topped with bourbon caramel and maple-pecan crumble. So rich, so decadent, so buttercream-frosting intense, you almost need a bao bun to buffer it. 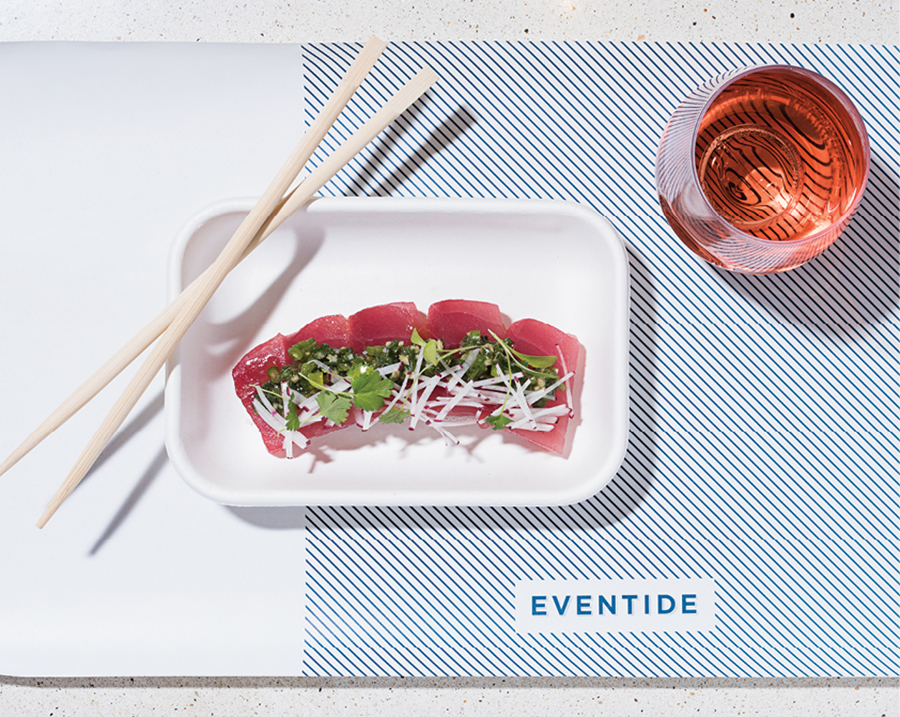