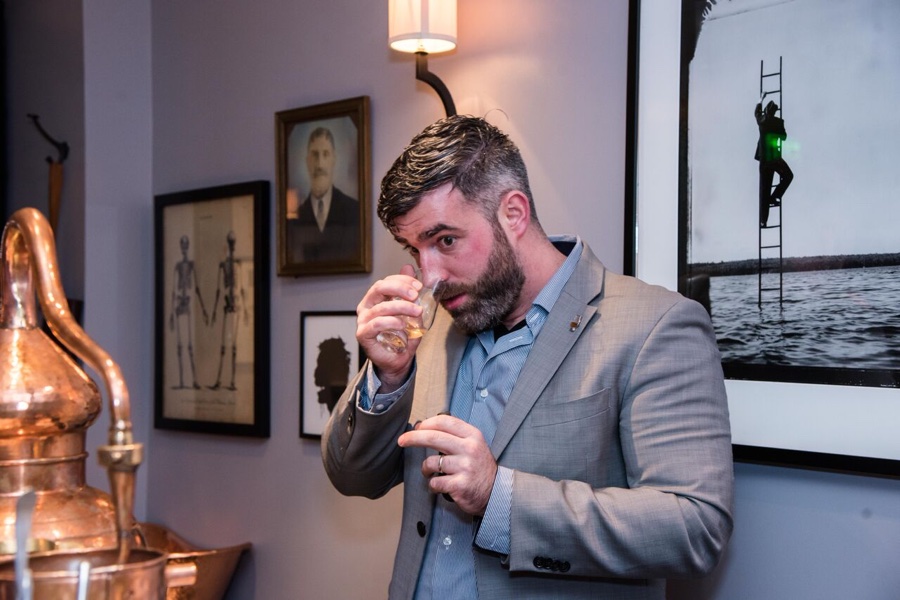 Donal O’Gallachoir leading a Glendalough tasting at The Hawthorne. / Photo by Iris MacKinnon.

“What you’re about to taste is what we think is one of the rarest whiskeys in the world,” says Glendalough Distillery co-owner Donal O’Gallachoir as he holds up a Glencairn glass gleaming with golden liquid at The Hawthorne cocktail bar. He goes on to explain the process of finishing a small amount of 24 year-old single-malt in a Madeira cask.

As an Irish whiskey promoter, Boston-based O’Gallachoir describes March as his “Super Bowl.” The recent event at The Hawthorne was one of many he hosted this month in an effort to push some of his spirits, yes, but also to alter the perception that Irish whiskey is sweet, one-dimensional, and should only be consumed in the form of a shot on St. Patrick’s Day.

“We’re trying to sort of reclaim the heritage of what Irish whiskey used to be,” says O’Gallachoir, who founded the distillery in Ireland with four friends in 2012, then moved to Boston in 2014 to focus on managing the brand in the U.S.

He’s doing it mainly by showing off how nuanced the spirit can be. At the tasting, O’Gallachoir poured a range of offerings, including Glendalough’s new 13 Year Old Single Malt, finished in Japanese Mizunara oak barrels from Hokkaido, and a 7 Year finished in porter barrels.  The former, the first Irish whiskey to be aged this way, has vanilla and peach notes, while the latter is extra malt-y. “Some say there’s eatin’ and drinkin’ in that whiskey,” he says.

In large part due to O’Gallachoir’s efforts, Glendalough’s bottles have become a staple at many of Boston’s top bars and restaurants, including the Hawthorne, as well as Drink, Backbar, and Alden & Harlow (for Irish whiskey cocktail suggestions, check out our March issue Liquid Diet).

And you’ll find them at dive bars, too. Whitey’s, in Southie, sells more Glendalough whiskey than any other establishment in the world, O’Gallachoir says. And it’s sold in 14 states and 38 countries. Why Whitey’s? “Well, we’re the only Irish whiskey that’s sold there, and you’ve got some good drinkers that go there,” he adds.

Meanwhile, sales of the sprit as a whole have surged in the U.S. in recent years, making it a good time to be in the business.

O’Gallachoir first started promoting whiskey as a teenager in Ireland, as “a cheesy promo person giving out free samples in bars,” he says. He eventually moved to the U.S. to represent another brand, then saw an opportunity to get in on the craft spirits movement by starting Glendalough, which bills itself as Ireland’s first craft distillery.

“He probably knows more about Irish whiskey than anyone I’ve ever known in my life,” says Sadoian, who this weekend will be mixing Glendalough’s Double Barrel into countless cocktails, including a Tom Collins riff with fresh lemon, honey, and club soda.

But if you prefer to drink it neat, follow O’Gallachoir’s tasting tips:

First, get a good Glencairn whiskey glass or bulbed glass similar to a wine or brandy glass.

Roll the whiskey around in the glass. Look at the whiskey sticking to the side of the glass (the legs) to get an idea of the thickness or viscosity of the spirit. Then hold it against something pale such as a piece of paper to grade the color.

Warm the whiskey slightly by cupping the glass with your hands, then swirling it slightly. Begin to nose the whiskey. It’s beneficial to keep your mouth open and chest engaged while nosing the spirit, as it allows you to get the flavor profile of the whiskey and not the alcohol vapor, especially on higher proof offerings. Try to identify the different flavors and notes that come to mind.

Now the fun part. Take a decently sized sip. Allow the whiskey to make its way around your mouth to get the maximum flavor and benefit. You want the different flavor receptors to be engaged. Now think about the whiskey … Is it think or thin on the palate? Is it sweet or savory?

After you swallow, you will be left with a distinctive aftertaste. This is called the finish and is said to have the most complex flavors. These flavors will start to reveal themselves, but sometimes they are subtle. What is the whiskey “telling you?”