Celebrate The Red Sox Home Opener With These Food Specials

Kick off Boston's baseball season with these dining deals near Fenway Park and beyond. 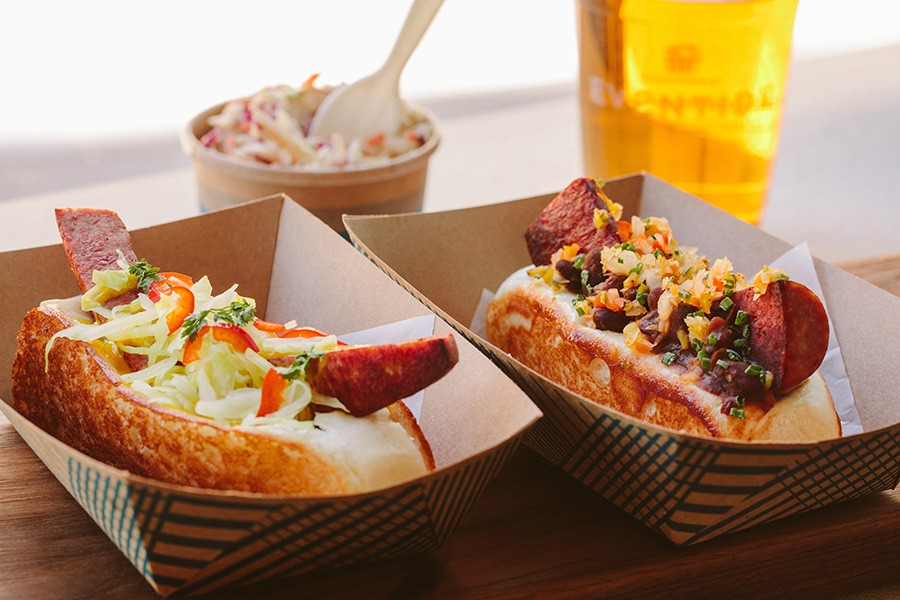 Join in on the fun of this Thursday’s Fenway home opener—when the Red Sox take on the Tampa Bay Rays at 2:05 p.m.—with food specials around Boston, from Fenway nachos, to loaded ’dogs, day-drinking spots, and more.

Sam Adams is now the official beer of the Red Sox, which makes the Jamaica Plain brewery understandably excited for baseball season. Party there on Wednesday night before the game, where a $10 ticket gets you a pint of Sam ’76, four beer samples, food, and more. Then on Fenway’s opening day itself, start the party bright and early with a VIP beer breakfast. Nosh on morning fare from Sweet Cheeks BBQ, along with two pints of beer exclusive to the brewery. From there, a trolley will leave at 11:30 a.m. to make sure you make it to Fenway with plenty of time to check out all that Sam Adams has to offer within the park itself. 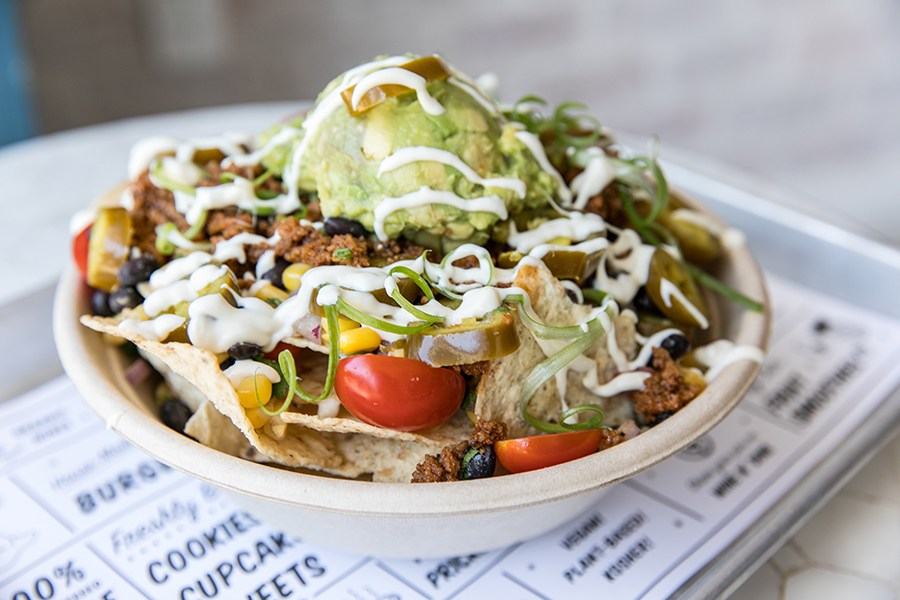 Fenway Nachos at by CHLOE. / Photo provided by Chris Langley

Ahead of the home opener day, the Fenway outpost will give away free (yes, free) vegan burgers to the first 50 customers who show up. There are two options, the popular guac burger with a black bean, quinoa, and sweet potato patty, and the classic, made of tempeh. In addition, during all home games this season, the Boston-exclusive Fenway nachos, topped with vegan chorizo, black bean salsa and guacamole, are $5. Wash it down with a $4 beer during home games at the Fenway location only.

It’s this seafood shack’s first season as an official neighbor to the Green Monster, and it’s celebrating with an upgraded version of a Fenway frank. Even though it’s tough to improve on a (delicious) classic, Eventide’s version consists of a house-made knackwurst ($9) topped with either sauerkraut and maple mustard, or baked beans and kimchi relish. It’ll be available to order exclusively during home games.

Even though sister bar Nathàlie isn’t yet open in Fenway, there’s a still a lot to get excited about from this restaurant group. The Downtown Crossing wine bar steps outside their typical menu with official Red Sox Hoodsie cups, a classically humble New England ice cream dessert. The cups are only $2, and will be on the menu through baseball season. And of course, be on the lookout for Nathàlie, which is slated to open this summer.

Located in the shadow of the historic ballpark, this Japanese-ish spot will be open early for every home game—that means noon for the Fenway opener. Pregame the early first pitch with a frozen Japanese Caucasian (yes, the cocktail is really called that), made from Reyka vodka, cold brew coffee, coffee brandy, and condensed milk. Or show up with a crew for a giant bowl of rum punch. Just make sure everyone’s good to actually get into the ballpark when game time rolls around.

Are you missing the old Lower Depths menu, which centered on hot dogs and tater tots? Then you’re in luck, as the taco bar now has baseball-themed variations of the old favorites available exclusively through Red Sox season. Enjoy the Green Monster, a footlong hot dog topped with chili and green goddess dressing, and a plate of Kenmore Tots topped with cheese, scallions, bacon and chipotle aioli.

A brand-new food truck, spawned from the brick-and-mortar location in Cambridge, made its debut right next to the Hynes Convention Center T stop earlier this week. Even though the truck will be parked daily, it will be open especially early for the home opener and have extended hours into the evening. Grab two tacos, such as chorizo topped with Yukon potato and cilantro, and a side for $10. 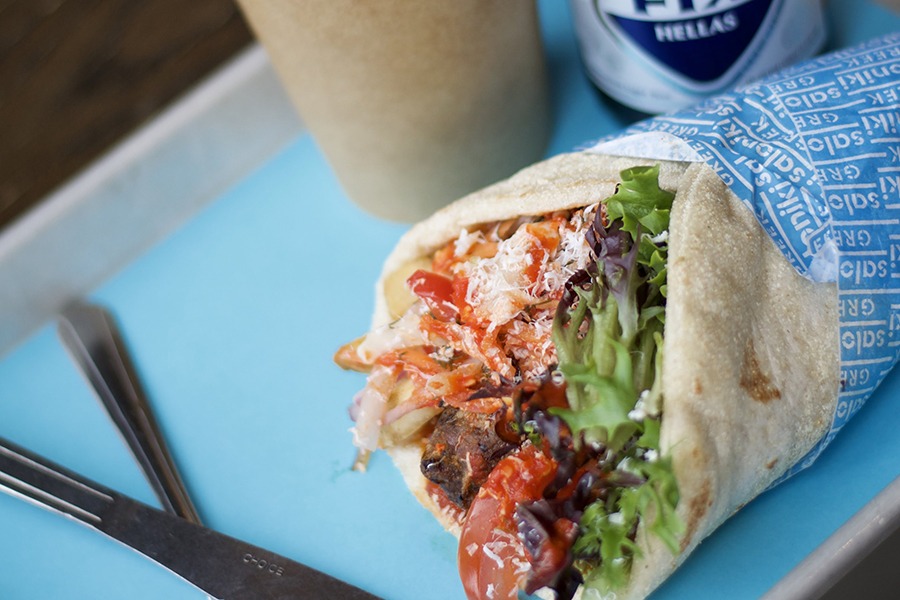 The Saloniki Opening Day special consists of their Jimmy pita, loaded fries and a greek beer for $14 / Photo provided by Winnie Lee

This fast-casual joint will offer a $14 special called the Gree(k) Monster throughout the day of the home opener. Indulge in their version of the Fenway frank, called the Jimmy: a pork sausage pita with grilled red pepper-sesame sauce, mizithra cheese, greens, tomatoes, and onion, alongside loaded Greek fries and a beer. The deal is exclusive to the Fenway location.

Thursday, April 5, is also Frosé Opening Day at this Newbury Street bistro, which is just a 15-minute walk from the ballpark. Frozen rosé is available here throughout the warmer months, but in celebration of baseball season and spring, it’s only $5 for the month of April. Cheers!

This might be the saddest news of opening day: Thursday marks the last day of the season to get a breakfast sandwich from Sweet Cheeks BBQ (though the biscuit sandwiches and hash browns will return for special occasions, like Marathon Monday). Plus, the restaurant will also offer a few game day specials during the home opener, such as a hot smoked chicken sandwich doused in habanero honey. Weather permitting, the outdoor patio (called the Shed) will be open, too. 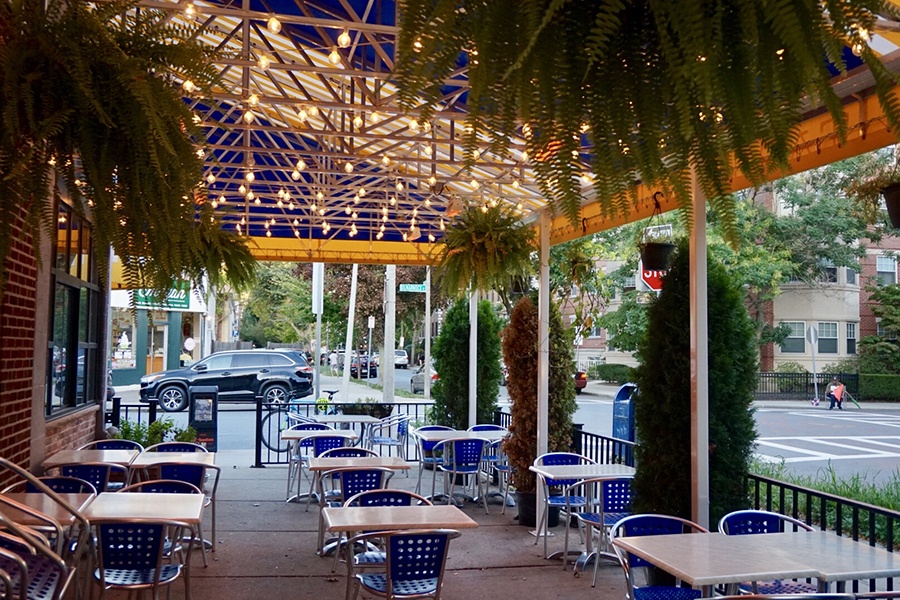 The patio at Tapestry, which will be open early for game day. / Photo provided by Nicole Russo

Just a few steps away from the Green Monster, enjoy Neapolitan pizza and oysters before the game here, open extended hours on opening day. The casual Expo Kitchen side of the restaurant—and weather-permitting, its outdoor patio—will be open at noon, giving you plenty of time to eat and sip.