I Tried It: Ax Throwing at Castle Island Brewing Co.

The Norwood brewery gets in on a medieval-themed bar trend with a little help from Adventure Activities. 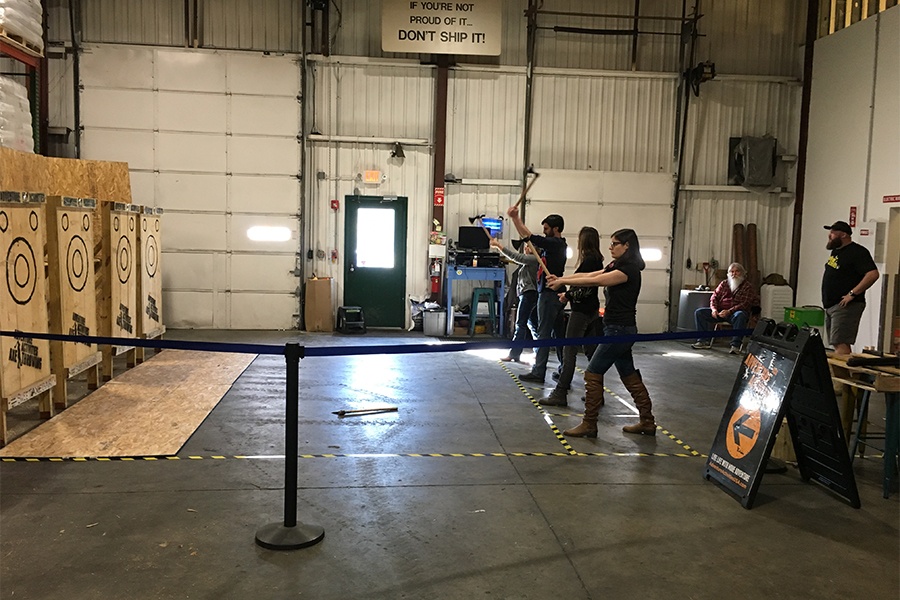 Me, a warrior / Photo by Matt Marino

On a recent early spring day in a brief window of temperate weather between snow storms, I found myself in a back corner of Castle Island Brewing Co., gripping an ax in both hands. Nearby, a burly man with a burly beard offered instructions on when best to release it for maximum accuracy. My target wasn’t a rowdy viking, but rather a large wooden target some 20 feet away. It wasn’t exactly a very long distance, but it also did not feel particularly close.

I was testing my medieval battle skills at a pop-up ax throwing event hosted by Adventure Activities, and on the other side of my efforts waited a free beer ticket. I gripped the ax at its lowest point, wrapped my left hand around my right, stationed my feet in a small taped-in square, and raised the ax over my head. Behind me, semi-interested bar patrons split their attention between me and a giant screen showing old episodes of The Office, and to either side of me, fellow amateur ax tossers prepared their throws. 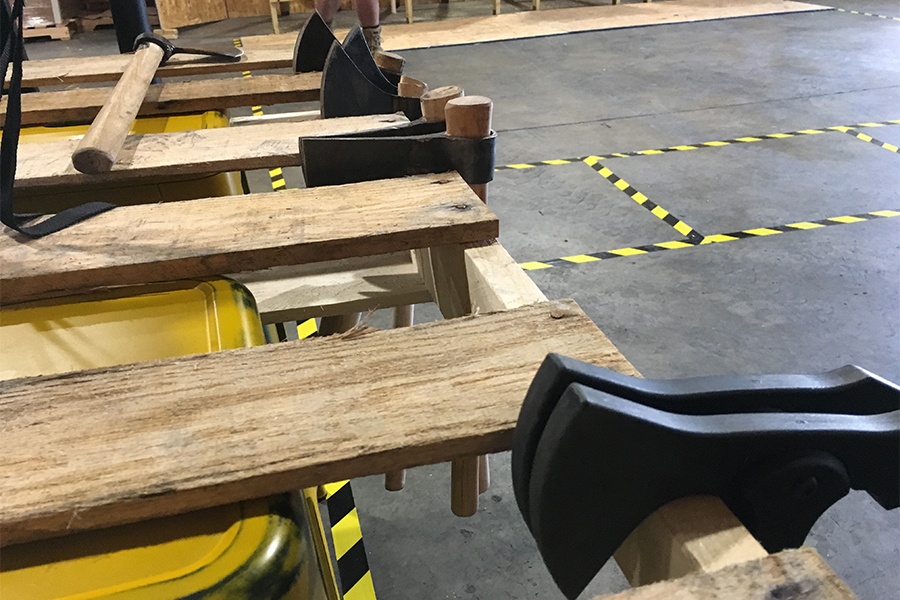 Our missiles / Photo by Lisa Weidenfeld

Generally speaking, I’m not the person you want holding an ax. I have released the item I was holding during the backswing while bowling and while taking golf lessons. My spaghetti arms were no match for the bowling ball, which crashed behind me only a few feet away, but I will take to the grave the memory of the stricken face of the golf instructor I nearly beheaded. Suffice to say, I wanted to tell everyone to stop watching Michael Scott torture Toby and empty the building, but this seemed deeply uncool and we were all there to be cool and chuck axes on our Saturday.

Spoiler: I didn’t kill anyone. I managed to control my feeble grip and not release the ax until it was pointed in a general forward direction. And most of the time, the ax I threw banged against the target. But it didn’t lodge into the target. We were not, as a group, batting 1.000 at sticking the ax in the target. Except for one guy who nailed the center of the target each time, and frankly, that is the type of high skill level that invites more questions than admiration. 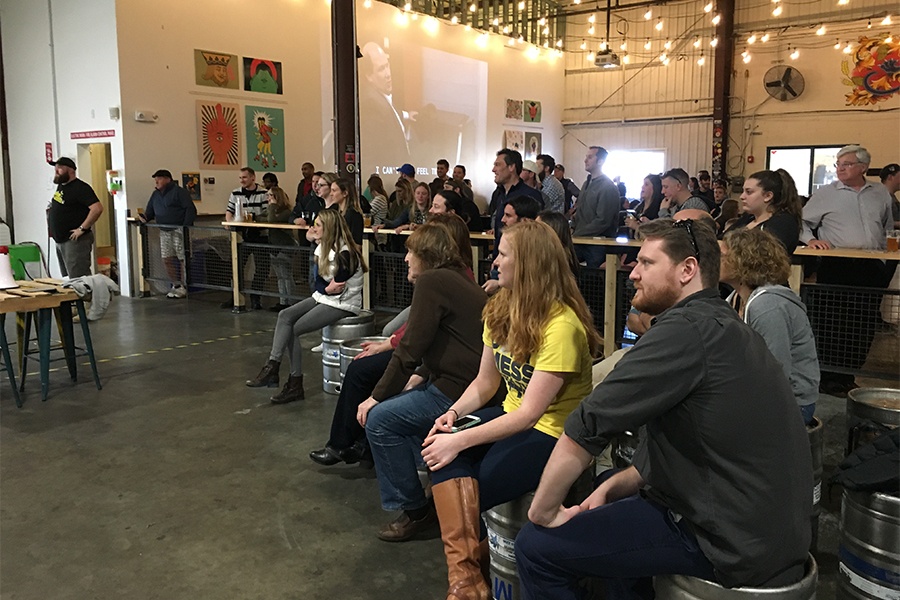 The crowd / Photo by Lisa Weidenfeld

Ax throwing is not that different from darts, really. It’s all just throwing a pointy object at a target, right? This was a bit more supervised, necessarily, and probably safer because of it: Our instructor told us all clearly at the beginning of the session that they would not allow anyone to participate if they looked visibly intoxicated. And despite what you might be imagining, you cannot actually take a beer with you while you participate. If you’re imagining this event looking like a scene out of a Thor movie, wherein you “quaff” a hearty ale, slam it down on a table, and then sling an ax somewhere, you are (mildly) mistaken. You can quaff some ale beforehand, and some additional ale afterhand (I went for the Righteous Currant, personally), but during, you will be using both hands, at least until they teach you to throw one-handed. Throwing one-handed is a good way to learn that your dominant arm is, in fact, useless.

The event is clearly a trend: Castle Island has already indicated they’d like to bring the pop-up back, and a variety of towns, including, inevitably, Somerville, may be getting full-time ax throwing bars. Not everyone will be as safe—after I shared the least embarrassing photo of myself throwing an ax on Instagram, a friend texted a photo of himself, grinning underneath a wildly off-target ax throw that caused the place he was at to force everyone back down to a more amateur level of ax throwing.

It’s also not terribly competitive yet. There’s no way to win, unless you count jostling your way to the throwing slot with the best angle for your friends to photograph you, which was possibly the way you were most likely to get jabbed with an ax. But the satisfaction of chucking something heavy and sharp and deadly, and watching it sink, satisfyingly, into the meat of the center of a target? That’s a victory all its own. 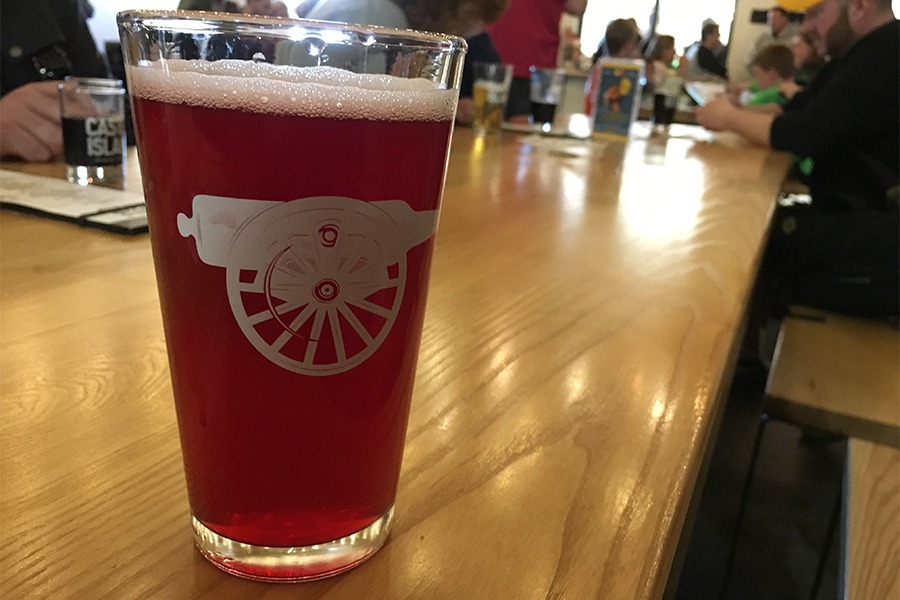 The reward for hard work / Photo by Lisa Weidenfeld