These local brews are meant for a different kind of carbo-load. 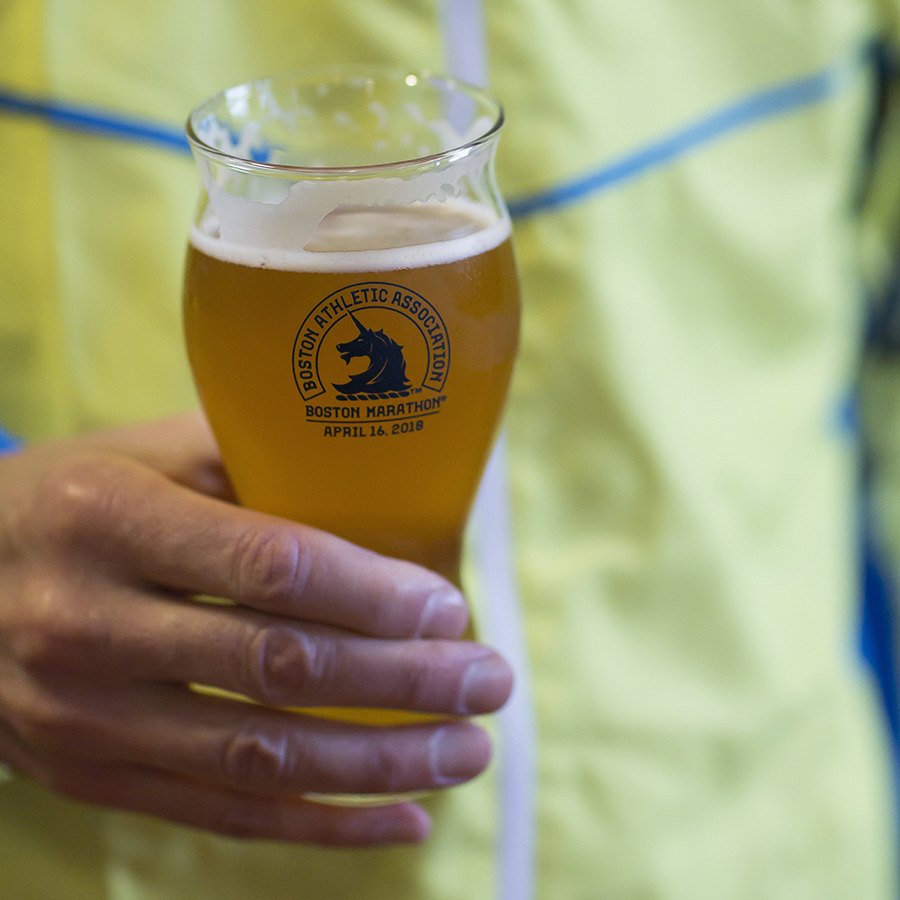 Sure, runners are encouraged to “carbo-load” with plates of pasta and bread for energy before the big race. But if the only marathon you’re planning on Monday, April 16, is day-drinking with friends and cheering on those running the Boston Marathon, grab a pint, or pick up some cans or bottles of these locally brewed beers designed especially for the day.

For seven years, this Jamaica Plain brewery has teamed up with the Boston Athletic Association on a fundraising beer with a light body and low alcohol content—perfect for a day-drinking marathon, or refueling after the race. This year, Sam Adams bottled the 4.5-percent, gose style ale for the first time in 750-ml vessels, which are now available at the brewery for $20. Boston 26.2 Brew is also on draft at restaurants around the city for Marathon Monday—and all proceeds from its sales go to Spaulding Rehab Adaptive Sports.

This brewery knows a little something about competitive drive—it is the winner of our first-ever Malt Madness tournament. But for the biggest day on the Boston sports calendar, DTR has crafted a refreshing new beer. It’s just 3.4 percent alcohol-by-volume, a full percentage lower than the brewery’s typical lower-alcohol offerings. It’s also supplemented with electrolytes including potassium, magnesium, chloride and sodium for optimal rehydration. The taste is crisp, with a corn malt, a dash of lime zest, and Magnum hops. The taproom-only exclusive starts pouring on Monday, where the race will be shown, with sound, on a 25-foot projection screen.

Look for yellow-and-blue cans of this spring-and-summer seasonal, and hazy, limited-release IPA now in select stores around Greater Boston. The 5.5-percent wheat ale has citrus and floral notes, balanced with bready maltiness. Marathoner IPA kicks off a new series, honoring a local runner and supporting the 26.2 Foundation. This year, it recognizes local Wayde Marshall, who is running his 13th marathon. If you’ll be near the start line on Marathon Monday, find this brewery pouring at a family-friendly Hopkinton community party.

For the latest batch of “the ultimate post-run beer” that this New York City brewery makes in collaboration with Nike Running, Singlecut is honoring the greatest marathon in the world. A dollar for every draft pint sold of this aromatic ale this year goes to the Light Foundation, the charity by former Patriots player Matt Light that supports youth outdoor learning experiences. The intensely aromatic, 4.2-percent IPA has just a touch of salt to kickstart the tastebuds. Find it on tap at marathoner-hub hotspots including Parish Cafe (Boylston Street), Bukowski Tavern (Boston), State Street Provisions, the Kinsale, Row 34, Gather, Monument, Oak Long Bar, and Anthem. (Make sure to call ahead if your heart is set—kegs can kick.)

In search of beer-loving marathoners: Especially for runners, Mystic has packaged some of its Table Beer wearing—what else?—Lululemon apparel. The Chelsea (for now) brewery and the beloved athleisure makers have teamed up to offer the light, crisp, and clean brew to Marathon finishers at Lululemon’s Newbury Street store after the race, in marathon-edition labels designed by Somerville’s Loyal Supply Co. The rest of us can just drink regularly packaged, readily available Mystic Table Beer, a 4.3-percent, Belgian-style saison with lemony citrus and peppery notes.

Spending Marathon Monday in Metrowest? After seeing off your favorite runners at the starting line, check out a pop-up beer garden in Ashland from Medfield brewery Zēlus. Founded by a group of beer lovers who are also runners, and named for the Greek spirit of contest and rivalry, Zēlus “makes beer for people who enjoy competitive athletic events and the great outdoors,” says founder Geoffrey Pedder in a press release. “This pop-up event will be a great opportunity for like-minded people to connect over a refreshing brew.” Taking over the Corner Spot park not too far from the marathon route from April 13-26, it will have extended hours on Marathon Monday, with electrolyte-enhanced beers on draft for tasters and pints; a food truck, music, and more.