Variations on a Theme: Tacos 2.0

From Wagyu beef to duck confit, luxurious ingredients are turning up in tortillas all over town. 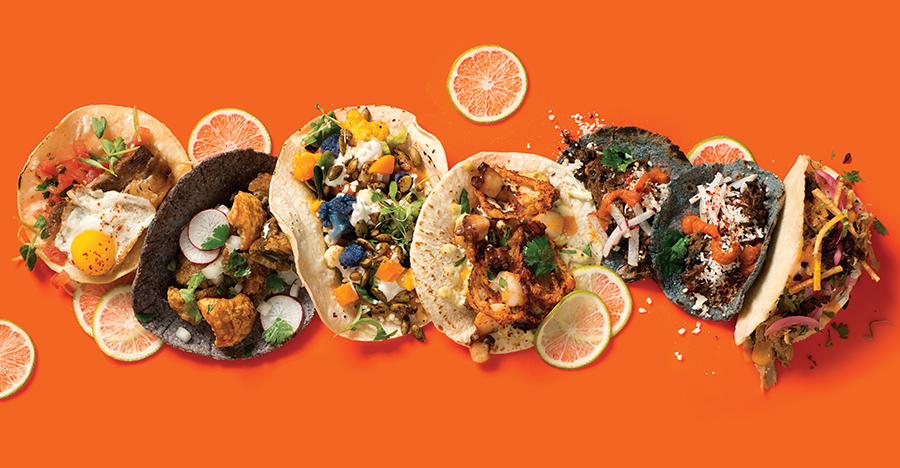 From Disney-derived Dole Whips spiked with aged rum to grilled street corn rolled in Flamin’ Hot Cheetos crumbs, chef-owner Jason Santos has never been one to shy away from whimsical flourishes. In the same vein, his new BLT Brunch Taco layers crispy seared pork belly with dollops of bacon sour cream, tomato jam, and a fried quail egg in a corn tortilla for a twist on the classic sandwich.

Simplicity is one of the secrets to the success of Socrates Abreu and Kaurys Ramirez’s Mexican restaurants—they’re set to open two new locations this year, doubling their reach. But once in a while an outside-the-box option, such as a chicharrón taco, will pop up on the specials menu. Inspired by the cravings of the kitchen staff, the decadent snack includes house-made crispy pork rinds doused in tomatillo-avocado salsa verde.

When Joe Cassinelli opened the Painted Burro in Somerville seven years ago, “People came in looking for fajitas and carne asada,” he says. But in the years since, our collective craving for creative Mexican cuisine has expanded. His answer: Burro Bar, the restaurant’s more-adventurous kid sister in Brookline, also opening Wednesday, May 2, in the South End. Tacos range from the all-veg tricolor cauliflower to the beefy short-rib double-stack.

Good news, taco-philes. At twice the size of the original Back Bay location, Lolita’s new Fort Point outpost has given culinary director Tom Berry the elbow room needed to expand his taco menu. He’s added a house-made flour tortilla program, plus versions exclusive to Fort Point, like the pulpo ajo, with garlicky slow-cooked Spanish octopus, jalapeño crema, and crispy shallots, and vegetarian offerings such as the spicy Brussels sprouts.

Charcuterie, sandwiches, and now tacos—chef Joshua Smith’s ever-growing Waltham-based empire of deliciousness expands again with the forthcoming debut of a taqueria/barbecue spot next door to his Backroom restaurant. Smith, who opened Michael Schlow’s Latin-leaning Tico before striking out on his own, will serve cheffy takes like cochinita pibil (slow-roasted heritage pork) and smoked Wagyu beef with morita sauce wrapped in corn tortillas in a fast-casual setting.

There are few things executive chef Colton Coburn-Wood won’t stuff into a tortilla. Case in point: He recently fried up grasshopper-coated oyster tacos for an event at his Lower Mills restaurant. Not ready to bug out quite yet? Stick with his elevated everyday options, such as duck confit, luxurious shards of chili-cured poultry with chamomile-vanilla purée and pickled red onions on a made-daily masa wrapper.