Relationships and trust are the keys to the neighborhood bistro's success. 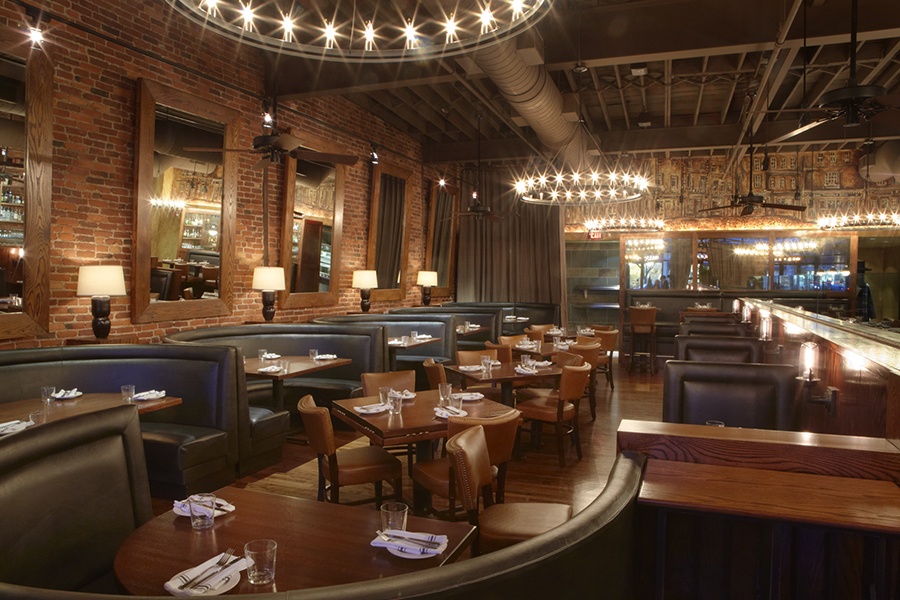 If the flip of a coin had gone the other way, Massachusetts Avenue between Harvard and Porter squares might have had another location of Todd English’s Figs. Instead, for 20 years this week, it’s been home to Temple Bar, a contemporary American tavern and a Cambridge neighborhood staple.

Patrick Lee, his brother, Peter, and business partners Sean Kennedy and Gerald Sheerin opened Temple Bar in 1998, two years after debuting Grafton Street Pub in the heart of Harvard Square. A mutual associate had connected the Grafton Group with Anastasios Christophilos, the owner of what was then Nick’s Beef and Beer. Lee recalls he and Christophilos sat together in a booth at Nick’s to set the terms of the restaurant deal on the back of a napkin.

Just before the sale was finalized, Christophilos called him up and apologized, but he had a new offer on the table—from the James Beard Foundation’s 1994 Best Chef: Northeast, and Boston’s biggest celebrity chef since Julia Child.

“I can’t remember exactly what I said, but it was basically like, ‘That’s disappointing,'” Lee recalls, “but I guess I’d sell it to Todd English, too.”

But Christophilos, a Greek immigrant who’d operated Nick’s since the early 1970s, had second thoughts. Patrick and Peter seemed like nice guys, he remembers, and their Harvard Square restaurant was successful, if not as high-profile as the casual pizzeria from English.

So he flipped a coin, and the rest is history.

“I’m glad it came to Patrick and his brother, Peter. We have a good relationship,” Christophilos says.

Twenty years in, that is a major key to Temple Bar’s success, according to Lee. 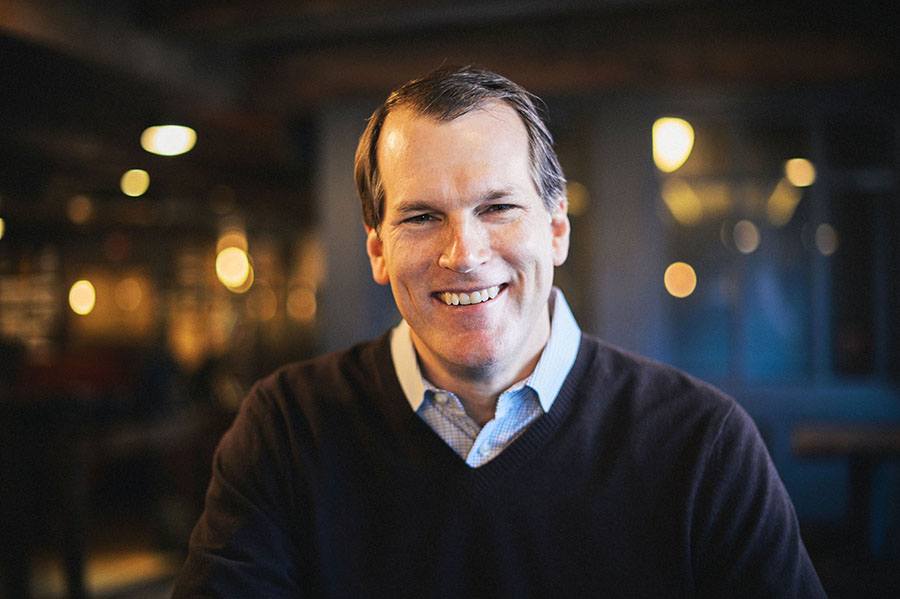 “In this business today, you have to really partner with your landlord in order to survive 20 years,” Lee says. “And having a guy that has the insight of working in this business for so long has really helped us over the years.”

It’s important to have a landlord that understands the restaurant industry’s tight profit margins, he says. While a neighborhood bistro like Temple Bar might not bring in the highest dollar amount possible, it has the potential to raise a building’s profile, and provide an amenity for the people who live and work nearby. A successful restaurant can also provide long-term stability, Lee adds.

He didn’t always understand this. Grafton Street originally opened in a smaller storefront on Mass. Ave. in Harvard Square, before it moved a few blocks to a corner location at Bow Street and reopened in 2001. The first location was a foot in the door to restaurant ownership—and it was where Lee first met Christophilos—but the space was too cramped and limiting.

“That initial deal that you sign is everything, because every [subsequent] decision stems from that deal,” Lee says. How much he can pay employees, for example, is related to how high his expenses are, and how much business the place is doing. “It’s exciting opening a restaurant. That whole process [of securing a location] is important and everyone wants to get it done. But it’s not worth getting done if it’s not done at the right price.”

Besides Grafton Street and Temple Bar, the Grafton Group is behind Harvard Square restaurants Russell House Tavern, PARK, and the Hourly Oyster House, as well as State Street Provisions, which opened on Long Wharf in 2015. The Lee brothers also still own Irish Village, which was formerly their father’s. They basically grew up in the Brighton pub, and met their business partners there; it was the inspiration for the full-service, comfortable pubs they opened in Harvard Square.

They aimed to replicate the Village’s success with Grafton Street, but that was as far as the initial business plan went, Lee says. When the opportunity to take over the former Nick’s arose, they looked at it as an extension of their success Harvard Square. In reality, Temple Bar is very different.

“We get some [business] that’s kind of school related, Lesley and Harvard. But I think generally, it really is more about the neighborhood,” Lee says. “No tourists. You get that sort of guest who really counts on you. You have to walk that line between the classics, and also kind of pushing the guest a little to try new things so that you can remain innovative and fresh and they still see you as an option.” 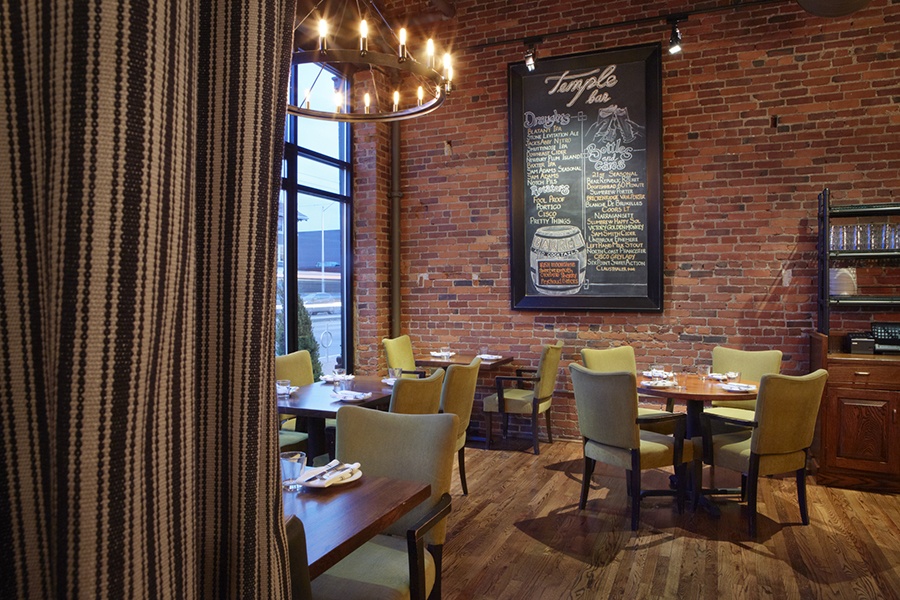 That neighborhood trust presents a great opportunity for Lee’s managers. The kitchen at Temple Bar was a stepping stone in the careers of Tom Berry, now the culinary director of the COJE Management (Yvonne’s, Ruka, Lolita), Michael Scelfo of Alden & Harlow, Waypoint, and forthcoming Longfellow Bar in Harvard Square; and Matt Drummond, executive chef of South Boston favorites Loco Taqueria and Fat Baby.

Executive chef Rich Edes has been at the helm of Temple Bar for about three years. The structure of the menu hasn’t changed—appetizers like Provençal mussels, and warm beets; entrees including steak frites, Atlantic halibut, and a roasted chicken dish; personal pizzas. But Edes, an alum of Barbara Lynch’s fine-dining gem Menton, has aimed to source higher quality, local ingredients, and lessen kitchen waste by order whole hogs. Under Edes, the Temple Bar kitchen grinds its burger meat in-house, makes its own breads and pastas, and grows herbs and edible flowers on site.

On the bar, manager Jenn Harvey has also been able to modernize. Temple Bar’s beverage program is rooted in classic craft, so as long as she stays true to that ethos, she can get a little playful, like using coconut liqueur to bolster a Manhattan riff, her Found in Mercia cocktail. Harvey continues to bring in new, local beers, as well.

“It doesn’t hurt us at all to try something completely wacky, as long as you have that core,” she adds—so look for her boozy ice pops again this summer. 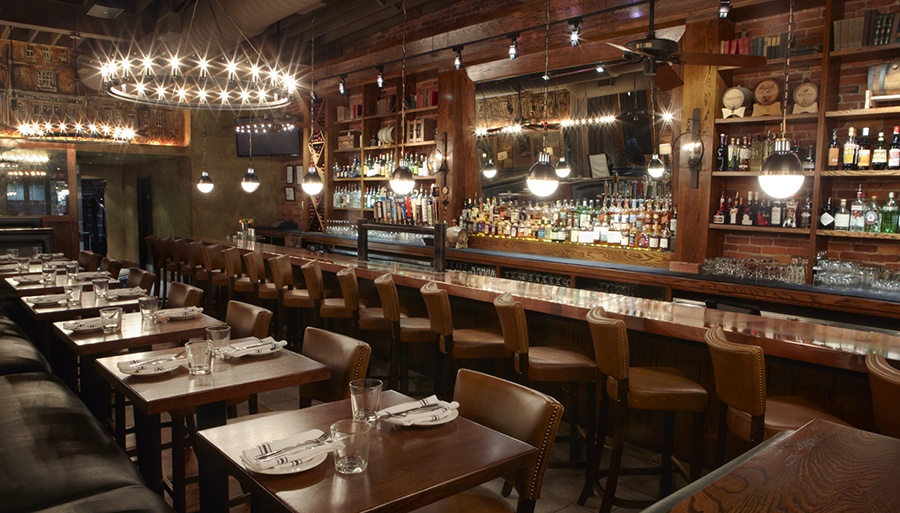 It didn’t take Patrick Lee 20 years to realize that ultimately, the key to any restaurant’s success is the people working there. But it’s only become more clear as his company continues to grow.

“You have to do everything you can to create that culture where people feel cared for, wanted, and taken care of,” he says. “What we try and do is hire talented people, and hopefully our experience and structure that we’re providing allows them to grow and be more innovative. If everyone’s happy, then people who walk into that restaurant people are going to feel happy. And they walk out, like, ‘Huh, I don’t know what it is about that place, but I just always feel good when I’m there.'”

If Lee and landlord Christophilos have their way, Temple Bar will continue to make people happy for another 20-plus years—no disrespect to Todd English.

To celebrate the milestone anniversary on Tuesday, April 24, Temple Bar has a Narragansett beer, burger, and dessert special for $20; and all entrees are priced $20 or less.