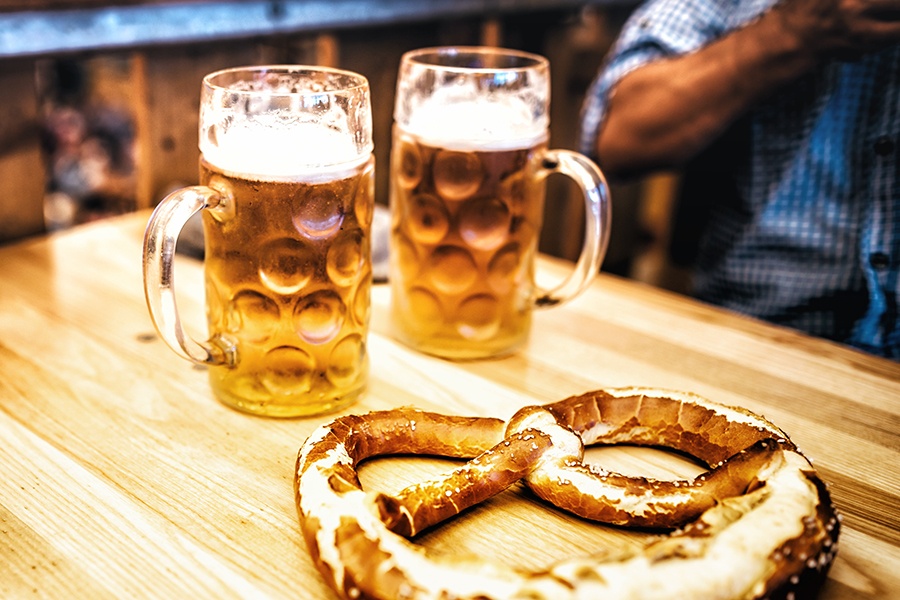 Mass. Beer Week comes to a close on Saturday, April 28, and the local celebration goes out in style at Dorchester Brewing Co. with beer’s best friend: Pretzels. The dudes behind the Mass Brew Bros blog, along with Wicked Twisted Pretzels, created a Wicked Twisted Dunkel in collaboration with DBCo.’s cofounder and head brewer Todd Charbonneau. The German-style dark lager is made with Munich malt, a dash of salt, and 40 pounds of the Grafton-made pretzels thrown into the mash. It’s a draft-only exclusive at DBCo., though you can also take home growlers to-go beginning tonight. The launch party starts at 5 p.m. on Thursday, April 26, with commemorative glassware free to the first 20 pretzel beer-buyers. Not entirely coincidentally, April 26 is National Pretzel Day, so continue celebrating all weekend with Boston’s destination-worthy twists: Find them in the Bronwyn biergarten, in bagel form at Bagelsaurus, dipped in chocolate from Bova’s, and more.

Roland Calupe is bringing his traveling, Filipino food pop-up, the Milagros Project, to the Lamplighter Brewing taproom this Friday night. This time, the chef—whose resume includes stints in Michelin-starred kitchens, and cooking with the likes of Marcus Samuelsson and others—is doing an a la carte menu of pulutan, food meant to pair with a night of drinking and socializing. The snacks include vegan dumplings; blistered shishito peppers with a calamansi-chili-soy-scallion dipping sauce; and chicken adobo sliders on pandesal with papaya-carrot atcharta (pickles) and garlic-soy aioli. 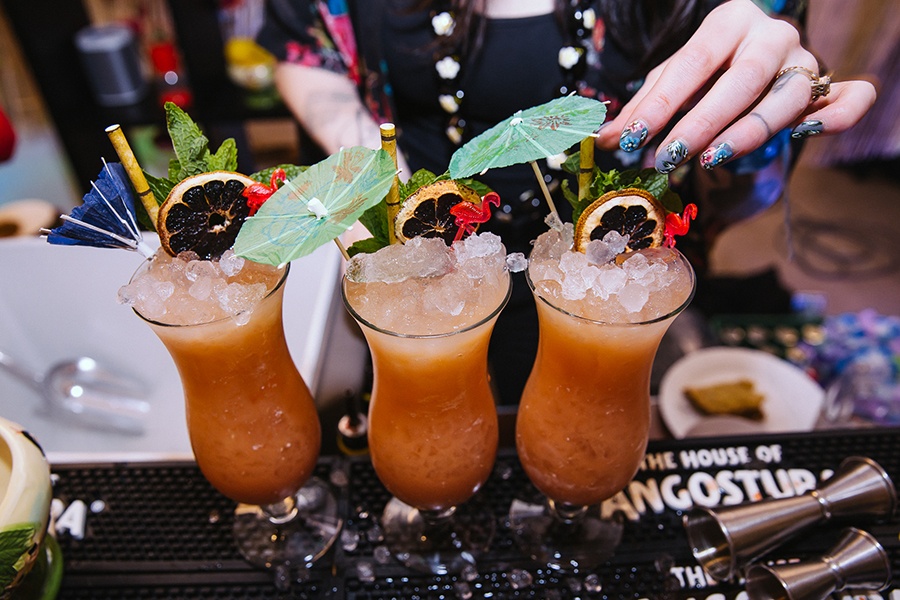 State Lines 2017. Thirst Boston returns with this and more events this weekend. / Photo by Natasha Moustache

Thirst Boston returns this weekend, with a full lineup of seminars, classes, and opportunities to throw a few back with cocktail experts and connoisseurs from around the region. Some of the highlights, for the spirits lovers among us: Late on Friday night, Camden Cocktail Lounge—soon-to-open at the Palms in Las Vegas with over-the-top libations like Fire & Ice, a gin drink garnished with jalapeño cotton candy—is popping up in the Library at Explorateur in downtown Boston. Admission is free, but RSVPs are required. On Saturday afternoon, Chris Weld of Berkshire Mountain Distillers is hosting a roundtable conversation at the Boston Center for Adult Education, about his award-winning work as a pioneer of craft distilling in Massachusetts. That night, the State Lines cocktail fair returns to the Innovation and Design Building, featuring bartenders from all over New England in an “urban state fair” complete with carnival games, giveaways, and sips and bites from local brewers, cideries, distillers, and craft boutiques. There is so, so much more—check out the full schedule of events and ticketing information at thirstboston.com. 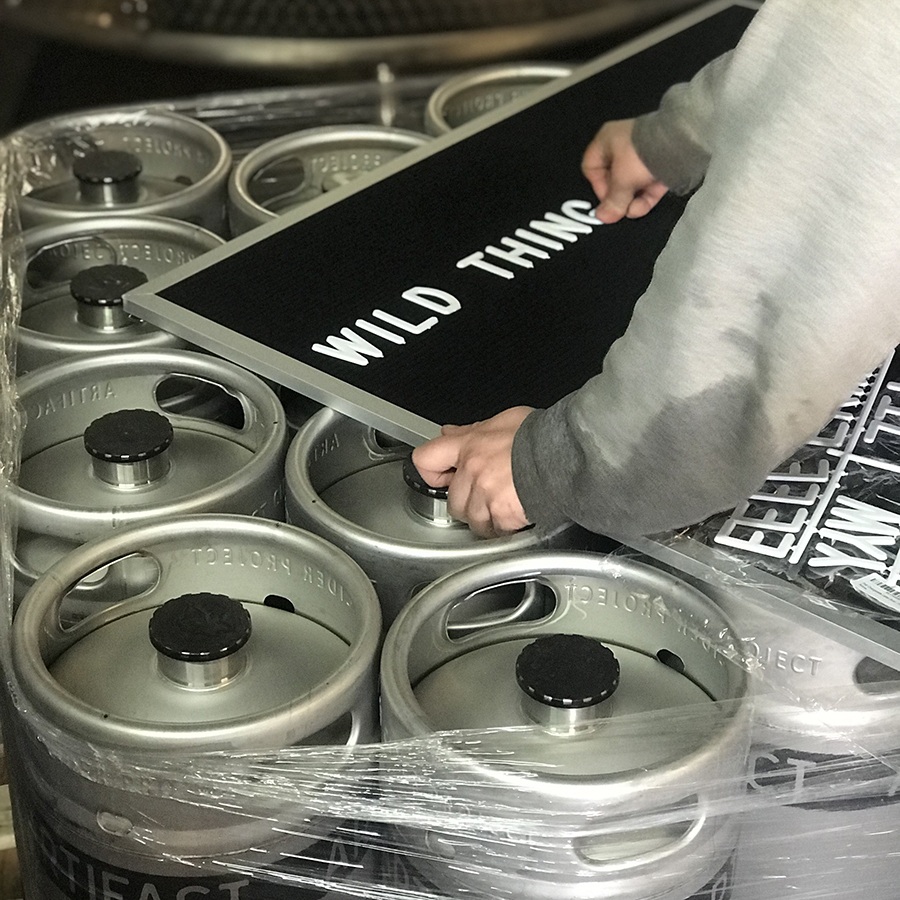 The Artifact Cider Project team is getting ready to open its Everett production facility for free tastings on Saturday. / Photo provided

A little more than a year ago, the Artifact Cider Project quietly moved its cider-making facility from Springfield to Everett, into a 4,000-square foot warehouse in the same building as Down the Road Beer Co.’s new-ish taproom. Despite the closer-to-Boston headquarters, cofounders Soham Bhatt and Jake Mazar didn’t intend to build out a tasting room this year. But fans of Artifact’s varyingly dry, juicy, funky ciders have been incessantly asking to visit, Bhatt says, so the guys are throwing caution to the wind and opening up their production space to the public every Saturday beginning this weekend. To start, Bhatt plans to pour the current core lineup, including Wild Thing, Feels Like Home, Wolf at the Door, and By Any Other Name by the can in complimentary, two-ounce tasters. He’s also sharing two super-limited, experimental ciders, which won’t see wider distribution. One new cider, called Fromlostiano, is a complicated cuvée of heirloom Vermont apples made in a French style and fermented like a Spanish cider. Learn more about these terroir-driven drinks with the cidermaker himself from noon-5 p.m. 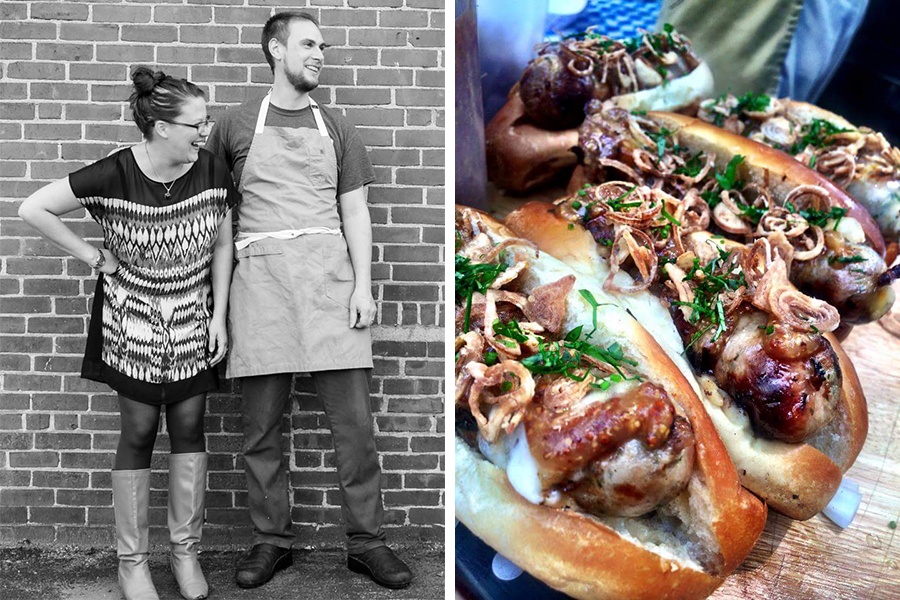 The JP Beer Garden is back in action—this time in an actual Jamaica Plain beer garden. The Turtle Swamp Brewery hosts Lizzie Szczepaniak and chef Owen Royce-Nagel, the culinary couple looking for the perfect location for the Alsatian restaurant of their dreams. While the real estate search continues, they plan to share their sausages, pretzels, and more around Boston this spring and summer, Szczepaniak shared in a recent email newsletter. On Sunday, the Turtle Swamp menu includes Muenster bratwurst with spicy garam masala ketchup; a boudin noir brat with apple mustard; a Chicago-style veggie dog; German potato salad with soft-boiled eggs and ham; and pretzels with Bavarian mustard. Sausages are $9, potato salad is $6, pretzels are $5—and everything tastes best with a beer.