All the pop-up, outdoor craft beer bars to check out this season.

This post was updated Wednesday, June 6, with details about the Tapped Beer Truck at Quincy PorchFest. We will continue to update this list if (and when) additional Boston-area beer gardens announce plans.

Warm weather has taken its sweet time to get to us, Boston, but we shall be rewarded for our patience. From the return of the Trillium Garden on the Greenway, to pop-up bars at Sunday markets in Cambridge and the South End, sip local beer, cider, and even wine in the sunshine all spring, summer, and fall. 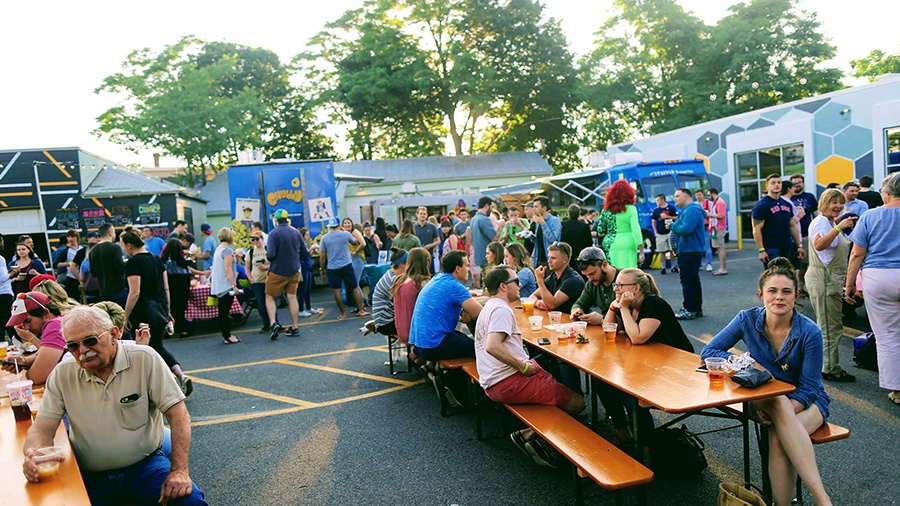 Back for its third season, this Wednesday and Friday night affair takes over Zone 3 on Western Ave. in Lower Allston from June through September. Along with a selection of Aeronaut beers (including a monthly Allston exclusive) and guest taps, there are rotating food trucks including the Chubby Chickpea, the Bacon Truck, Amigos Locos, Oath Pizza, Tenoch, and more, and a ton of family-friendly entertainment. This year, there’s a bit of a space upgrade from just the blacktop parking lot: The beer garden series will help Zone 3 inaugurate a new, outdoor community program and performance space at the site. The live music lineup is stacked with local talent and visiting artists, including Providence indie band Arc Iris (Friday, September 7), and throughout the summer there will be collaborations with various cultural organizations, including Allston Pudding and Boston Hassle, too. It kicks off June 1 and runs until September 28, from 5-9:30 p.m. on Wednesdays and 5-11 p.m. on Fridays. 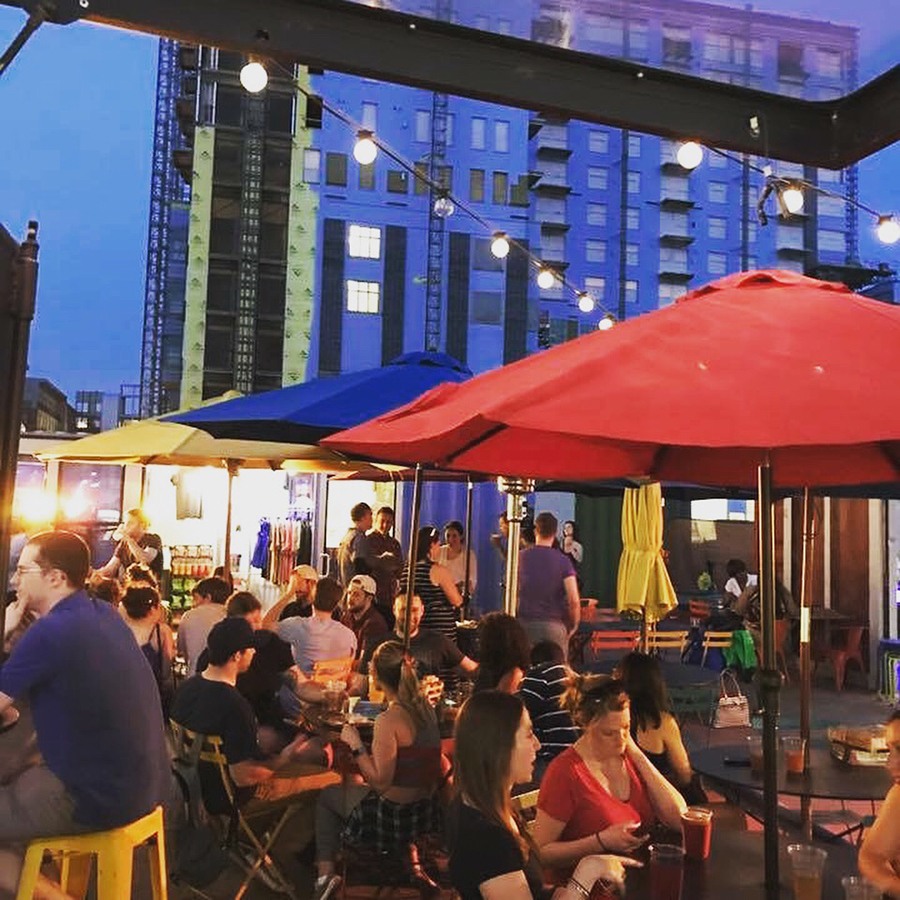 When Somerville Brewing Co., the makers of Slumbrew, opened a full-on brewpub at Assembly Row this past November, they thought their years of operating a shipping container-built beer garden in the development were over. But not so: the American Fresh Beer Garden reopened Wednesday, May 2, just around the corner from the Assembly Row restaurant and brewery. “We were over the moon when Federal Realty offered to let us return,” says owner Caitlin Jewell. The theme of the open-air, family-friendly beer bar is unwinding and unplugging, she says, so it’s stocked with board games and a book lending library. It will host outdoor trivia on Tuesday nights, live comedy on Wednesdays, bocce tournaments, free live music, and more events, and it has a food menu full of salads, pizza, nachos, and sandwiches. Fourteen Slumbrew beers are pouring, along with house-made lemonade. It’s open weeknights from 4-11 p.m., Saturdays from 11 a.m.-midnight, and Sundays from 11 a.m.-10 p.m. 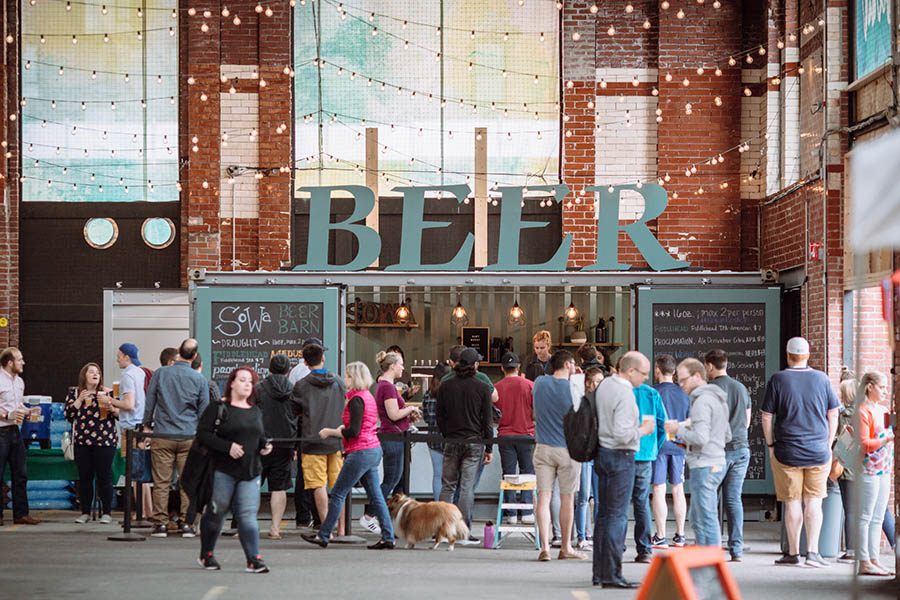 Local distributor Craft Collective is fueling the party every Sunday inside the historic power station, with draft beers from the likes of Aeronaut Brewing, Fiddlehead Brewing, Prospect Ciderworks, and more. The weekly food truck bazaar is right outside, not to mention the artists’, farmers’, and vintage markets just a short walk away. The beer barn sticks to the SoWa season, from May 6-October 28, and is open Sundays from 11 a.m.-4 p.m. 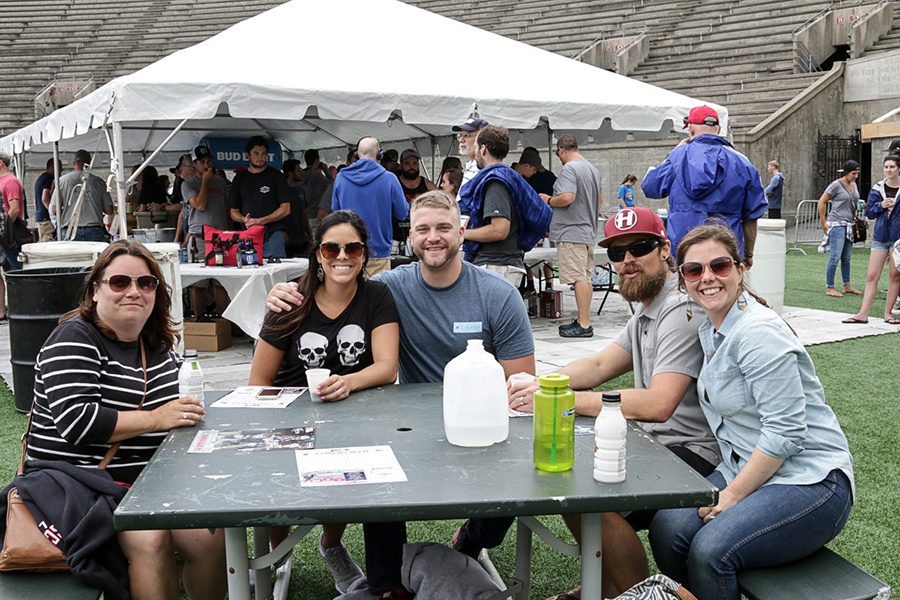 Catching a professional sporting event live with a craft beer in hand is an optimal way to spend a Saturday, and lacrosse fans have a regular opportunity this summer. Boston’s Major League Lacrosse team, the Cannons, has a field-level craft beer garden popping up at six home games taking place at Harvard Stadium and Endicott College. Serving local libations from Bent Water Brewing Co. of Lynn, True North Ales of Ipswich, Framingham’s Jack’s Abby, and Castle Island Brewing of Norwood, there will be IPAs, lagers, stouts, and even Cannons-exclusive brews. It opens to the public three hours before each match, and is pouring pints for ticketed fans through the third quarter. The debut beer garden game is at Harvard Stadium, against the Dallas Rattlers, on Saturday, May 5. 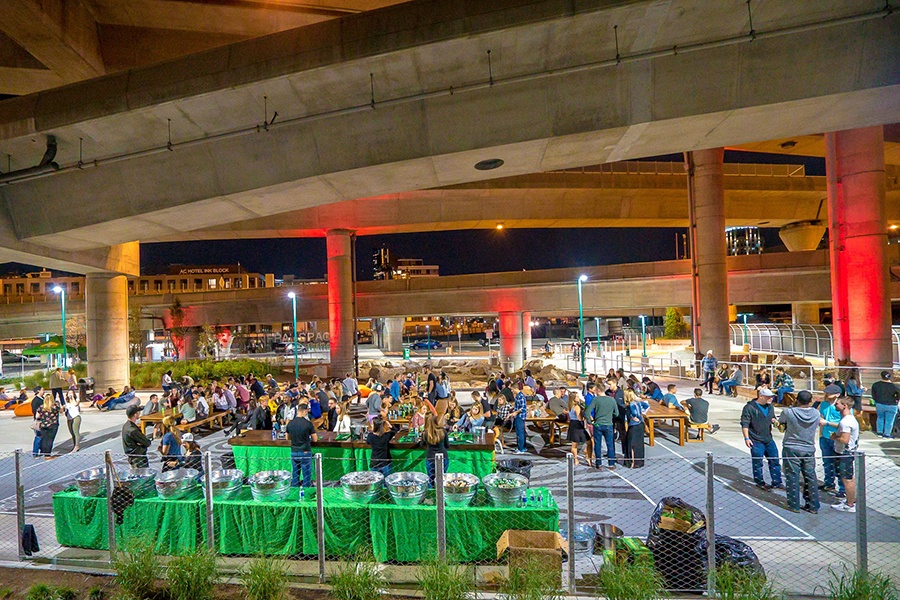 Editor’s note: Castle Island’s plans have fallen through as of early July.

This Norwood brewery will have a Boston proper presence every weekend this summer. This pop-up beer bar underneath the Southeast Expressway will serve Candlepin hoppy session ale, Keeper IPA, and more Castle Island drafts, and host rotating food trucks and other pop-up events. “It fills a need for something I’ve always wanted to see in Boston,” says Castle Island founder Adam Romanow, “more exciting, unique attractions in amazing, unexpected locations.” The Underground beer bar will be open later this spring through October on Thursday and Friday from 3-10 p.m., and Saturday and Sunday from 11 a.m.-10 p.m. Stay tuned for an opening date. 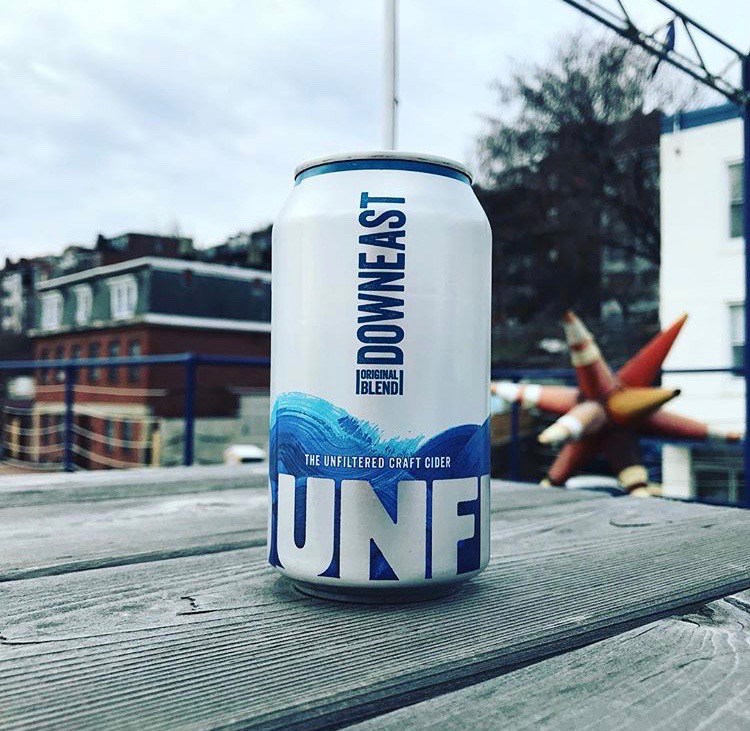 Downeast Back Porch on the Greenway

Dewey Square will be awash in unfiltered ciders from Wednesday, May 23, through October with this new Greenway initiative. The East Boston-based cidermakers are bringing a handful of hard choices, including an exclusive Mint Lemonade cider; and the bar will also have wines and a beer option each week. Local food trucks will be on hand, with family-friendly events programming throughout the season. It’s open Monday, Wednesday, and Friday evenings from 4-9 p.m.; from noon-9 p.m. on Saturdays, and noon-7 p.m. on Sundays. 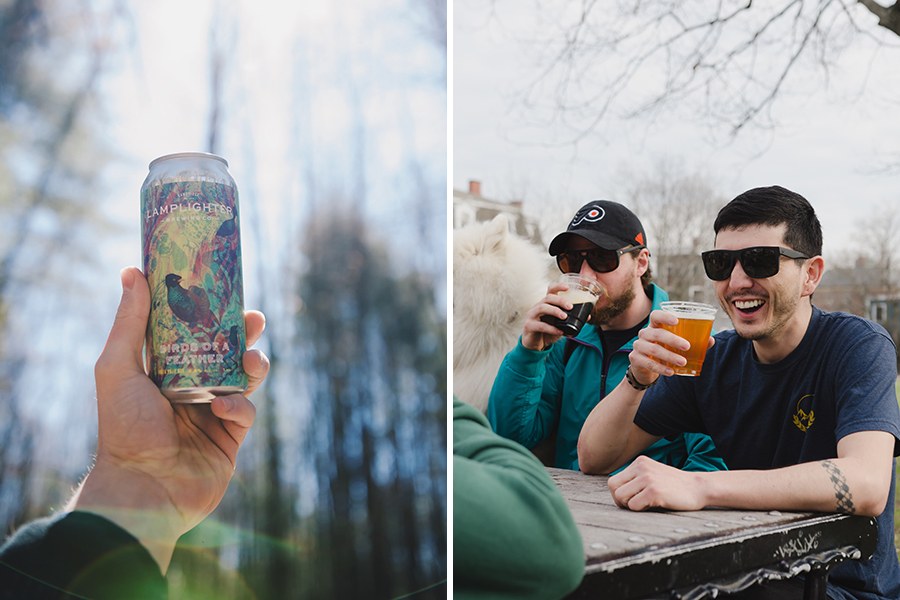 New England Open Markets and the Central Square Business Association have asked a local brewery to bring the beer to its Central Square Flea Market. Beginning Sunday, May 6, Cambridge’s own Lamplighter Brewing Co. will set up at the far end of University Park with a draft trailer full of funky beers. The Central Flea itself hosts dozens of artists, fair trade vendors, live music, food trucks, and more. Both the market and the beer garden open every Sunday through October from 11 a.m.-5 p.m. 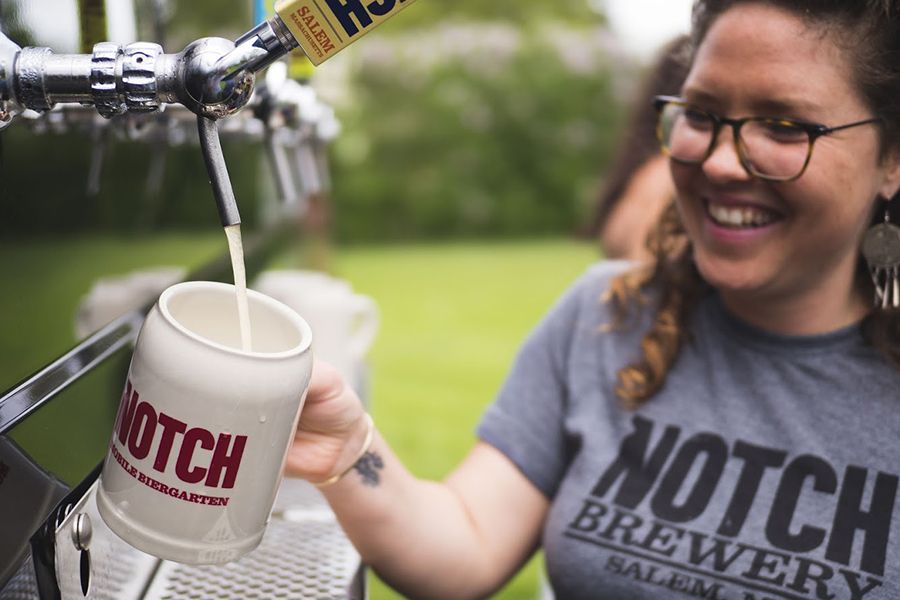 While this brewing company has a wonderful riverside biergarten at its Salem headquarters, it’s taking the chill vibes on the road this summer in partnership with the Trustees. A mobile draft system—which is also available for private rentals—provides the sessionable ales and lagers, and the outdoor drinking pros at Notch are also providing beer garden-style seating, string lights, and half-liter ceramic steinkrugs (beer mugs). Family-friendly activities are tailored to each unique venue hosting the pop-ups. The partnerships begin Thursday, May 17, at the Stevens-Coolidge Place in North Andover, and continue around the state through early November. Find out the full schedule at thetrustees.org. 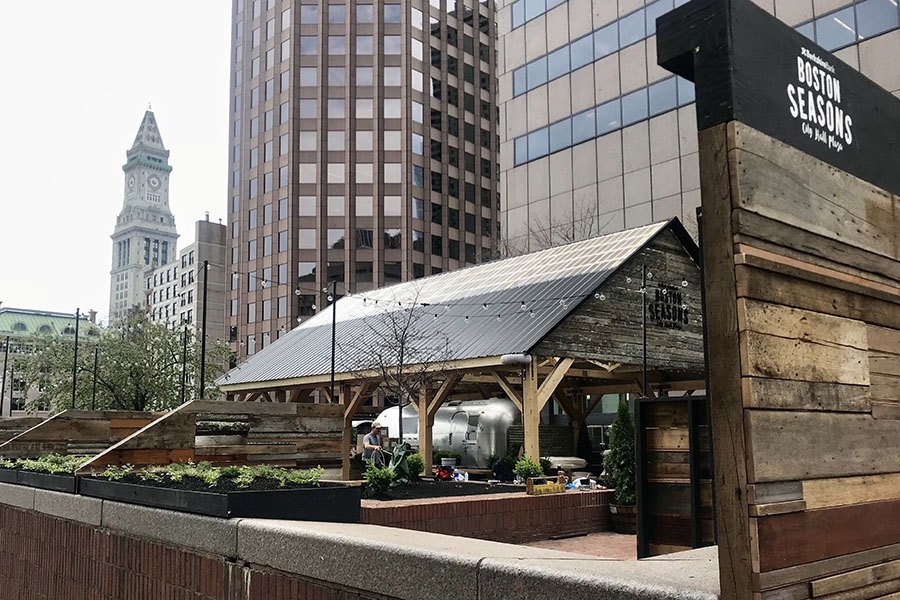 The Patios at City Hall Plaza have a Wachusett Brew Yard this summer. / Photo provided by Boston Seasons

As part of Mayor Marty Walsh’s ongoing efforts to make City Hall Plaza, errm, better, this is a summer installation featuring mini golf, Honeycomb Creamery Ice Cream, visiting puppies (!), and, of course, beer. Westminster’s Wachusett Brewing is bringing back its Brew Yard, which debuted at City Hall last fall, and was also part of the plaza’s Boston Winter. The Wachusett Brew Yard is dog-friendly, and open seven days a week beginning Friday, May 4, from 4-9 p.m. Monday-Wednesday, 4-10 p.m. Thursday and Friday, and 11 a.m.-10 p.m. Saturday and Sunday. 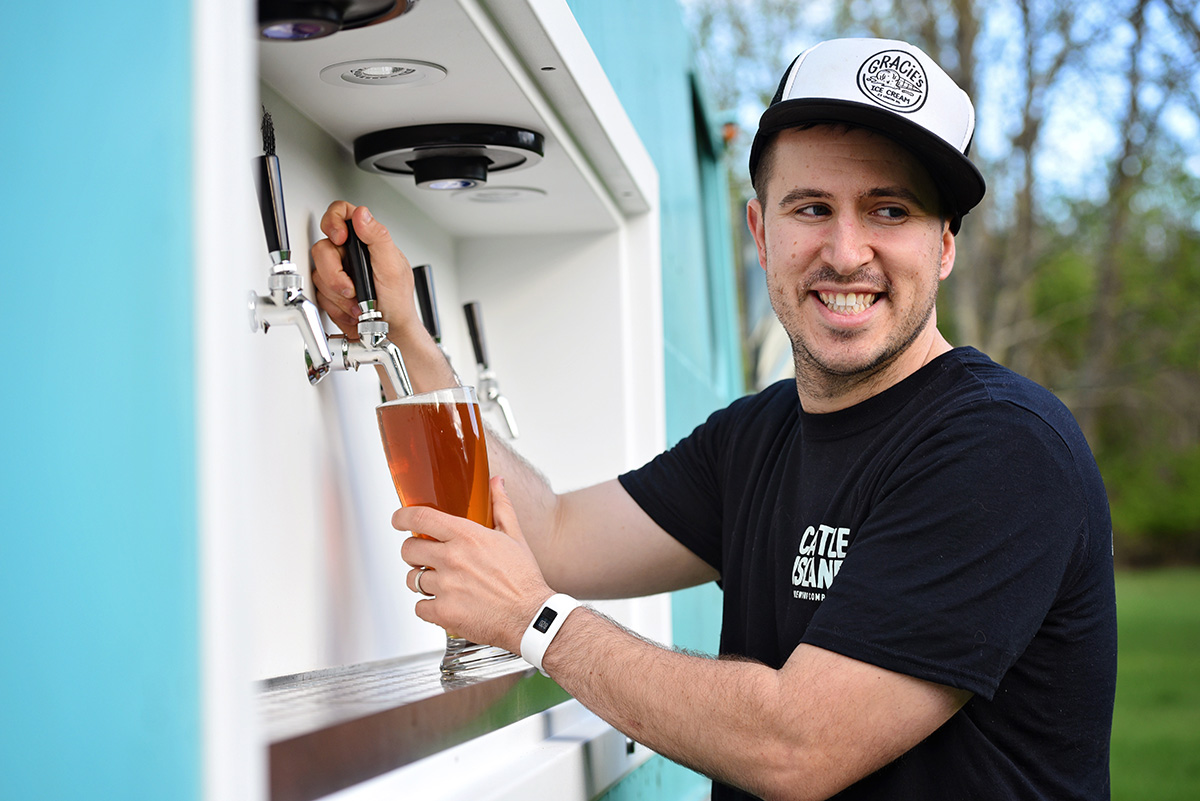 Chef Avi Shemtov’s mobile beer catering units deploy in two waterfront locations on Saturday, June 23, during the city’s third annual PorchFest. Find one Tapped Truck and a food vendor on Bayside Road in the Squantum neighborhood, to pair craft beer with harbor views; and stumble upon another on Samoset Avenue, just a short walk from Merrymount Beach. Both setups will have Bavarian-style benches and tables, for families to take a rest while live bands perform on various porches throughout Quincy.

This scenic spot on the Greenway overlooks Rowes Wharf, and provides access to the rotating food trucks parked there. Inside the beer garden, benches, long tables, and repurposed barrels hold pints of fresh IPAs and pale ales, sour and wild experiments, stouts, coveted collaborations, and more. The Trillium Garden debuts Thursday, May 24, at 2 p.m., and it will stick around through October every Wednesday-Friday from 2-10 p.m., Saturday from 11 a.m.-10 p.m., and Sunday from 11 a.m.-6 p.m. Can’t get enough Trillium in the sunshine? The Canton brewery also has a patio this season.