A Brookline eatery nails a task that modern neighborhood spots too often neglect: feeding the neighbors. 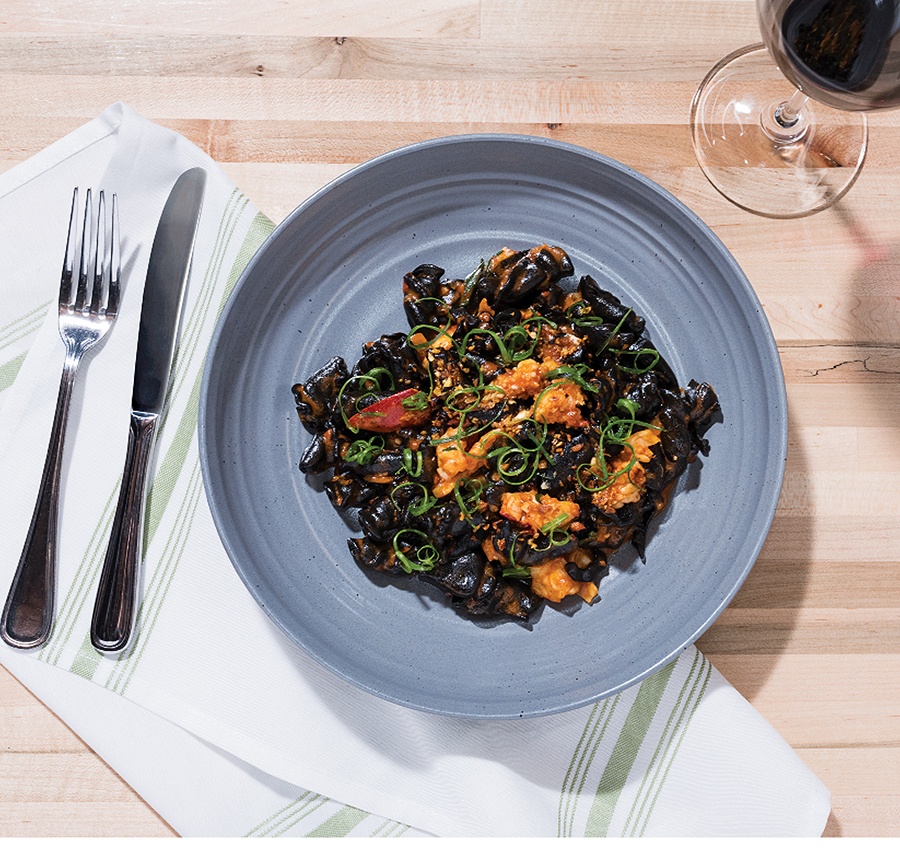 The chopped salad at Coolidge Corner’s appealingly earnest Prairie Fire is a rock-solid dish. It isn’t exactly a looker. Plainspoken and sturdy—hearty greens tossed with fire-roasted broccoli, celeriac, pickled grapes, smoky skin-on chicken chunks, and thick green goddess—it’s the salad you call for moving-day help, not a steamy affair. Right about here is where a reviewer typically flips the script, rattling off a quickie valentine to the dowdy stalwart’s come-hither textures…or its unpretentious, of-the-people beauty. Instead, I’ll conserve hot air. You see, this $14 chopped-salad workhorse isn’t meant for the critic’s gaze.

Prairie Fire, from the crew behind Milton’s beloved Steel & Rye, is what they used to call a neighborhood restaurant: as in, a restaurant set up to feed (you got it) the neighbors. Back in the day, I mean, before the upscale-casual revolution hijacked the term, turning it into little more than a stylistic conceit. Don’t get me wrong. I’ll happily drop double-digit Lyft fare for a pay-grade-defying Corner Trattoria or No-Frills Tap & Trotter. But if I had a dime for every self-styled Nabe Joint pitched more to Bon Appétit scouts than the folks down the block, I’d have, well, a lot of dimes, but not enough for the friendly neighborhood caviar supplement.

In refreshing contrast, co-owners Dan Kerrigan and Bill Scannell, with chef Brendan Joy, have determined what Coolidge Corner wants on a daily basis is a casual, not-too-challenging selection of small plates, salads, artisanal pizzas and pastas, and vegetable sides elevated to starter-level glory. It doesn’t much want main courses—though the specials board always features a nicely crisp-skinned grilled chicken ($26) with salsa verde and potatoes, plus straightforward fish and steak options. And it wants one solid-as-hell chopped salad that, for $14, is just what the life coach ordered for austerity-plan Mondays.

Joy’s highly grazeable lineup treats the haunting smokiness imparted by the restaurant’s massive wood-fueled oven as a signature secret ingredient. It works. Fire-roasted oysters ($4 each) dotted with garlic butter and bread crumbs emerged from the crackling inferno in a gray-tinged gauze, a burst of lemon peeking through. Chicken-pork meatballs ($9) rode in on a sizzling cast-iron mini, nestled in a shallow pool of smoky tomato sauce and garnished with Parm and crispy chicken-skin gribenes. Just like your secular half-Jewish nonna used to make, and with six to an order, you can afford to lose a couple to a spouse whose just-a-salad good intentions derail. Seasonal vegetables given the small-plates treatment were particularly strong. My favorites were tiny Brussels sprouts ($9) roasted with lemon, garlic, and parsley, as well as broccoli greens ($8), a criminally underused ingredient, that played beautifully with the intensity of silky bagna cauda redolent of anchovy and roasted garlic.

Joy’s deep experience working in some of Boston’s top kitchens, including No. 9 Park, Sportello, Coppa, and Bondir Cambridge (as chef de cuisine), came through in the excellent pizza- and pasta-craft. On the pizza front, Prairie Fire picks a comfortable lane: chewy, reasonably flavorful crust with an assertive burnish along the outer corniccione. I liked the mushroom ($16), a molten dairyscape of oozy fontina and béchamel swaddling roasted kale and melted leeks, more than the fennel sausage ($17), with its tangy San Marzano sauce, provolone, fennel confit, and fresh ricotta, which was a little on the lean side. 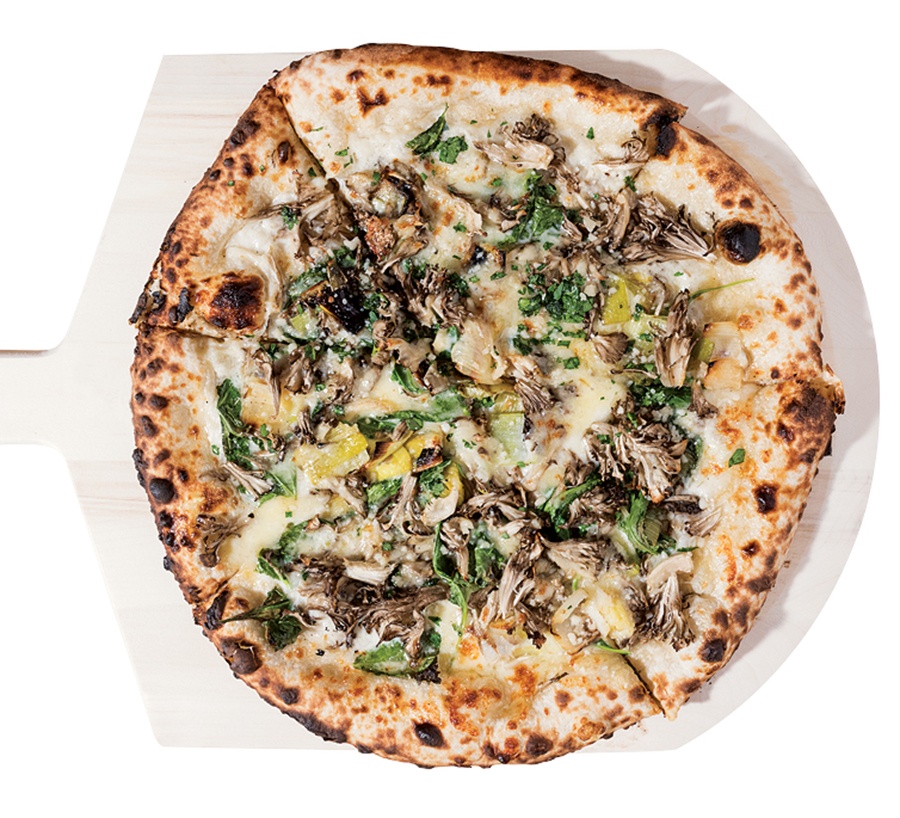 Joy’s house-made squid-ink campanelle ($25) is a dish worth crossing town for. The pasta had just the right chew—and sauce-couriering concave bell shape—to pair with spicy lobster arrabbiata sauce, made with roasted-shell stock cooked down to an intense demi-glace bolstered by onion, garlic, Calabrian chilies, and back notes of fire-roasted tomato. If you happened to start with the next-level beet salad ($14) with mint, rye cracker, and a slick hummus variant made with lentils, you may think you’ve stumbled onto destination Corner Trattoria terrain.

A few quibbles: Saffron rigatoni ($23) with Bolognese sauce and garlic bread crumbs featured solid pasta handling, but the saffron felt like a risky choice—not enough positive impact for omnivores, and potentially deal-breaking for the sort of diner who goes with meat sauce. Steamed mussels ($15) served sans shell were a nice idea, but the plating with root vegetables and Marfax beans was a real head-scratcher. And the potatoes accompanying the chicken? Chalky texture every time.

Service was solid, marked by an upbeat, genial patter that felt genuine. Deeper training on glass-pour wines, on the other hand, wouldn’t hurt. Then again. Anyone can memorize a flash card on Willamette Valley’s pinot-friendly loam. Far trickier is a precise topographical grasp of the 500 hectares of variegated Brookline terroir centered on Harvard Street at Beacon.

When Prairie Fire’s principals dream of Coolidge Corner, I suspect it’s in high-def color. I think they feel acutely the exact number of steps they are from the indie movie theater; from Brookline Booksmith and Kupel’s; from the local gourmet shop that anchors their artisanal cheese board ($15). Where you and I see random foot traffic, I think they see a parsed-out choreography of Longwood medics, first-jobber roommates, and BU students. And when they stir their house cocktails (try the boulevardier, $12), I think it’s to the beat of the Green Line’s recurring flash-mob line dance, in hemiolic syncopation against the herk and jerk of the most intricate pedestrian-rights tango in the city. In other words, I think they get their neighborhood.

More important, I think they’re fully committed to the daily grind of getting it. Like a camera-mugging politician who claims their only priority is serving the home district, not leapfrogging to national posts, and then (gasp!) actually walks the walk. It is as rare as it is refreshing. 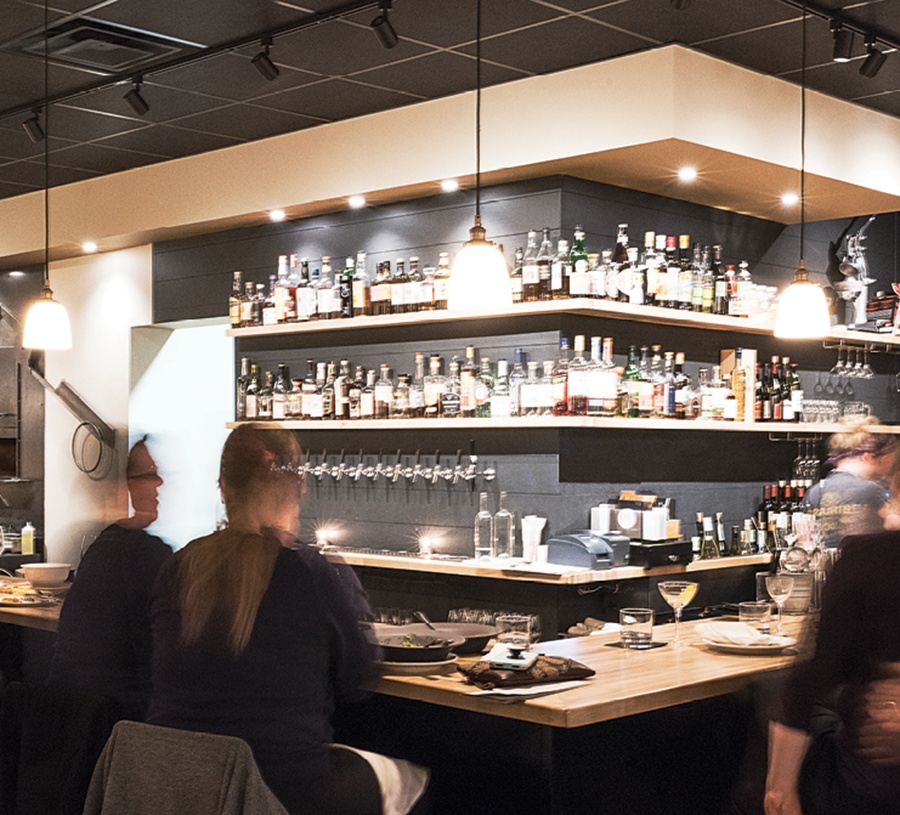