The Patriots Hall of Famer was cheering on Terry Rozier during last night's playoffs win against Philadelphia. 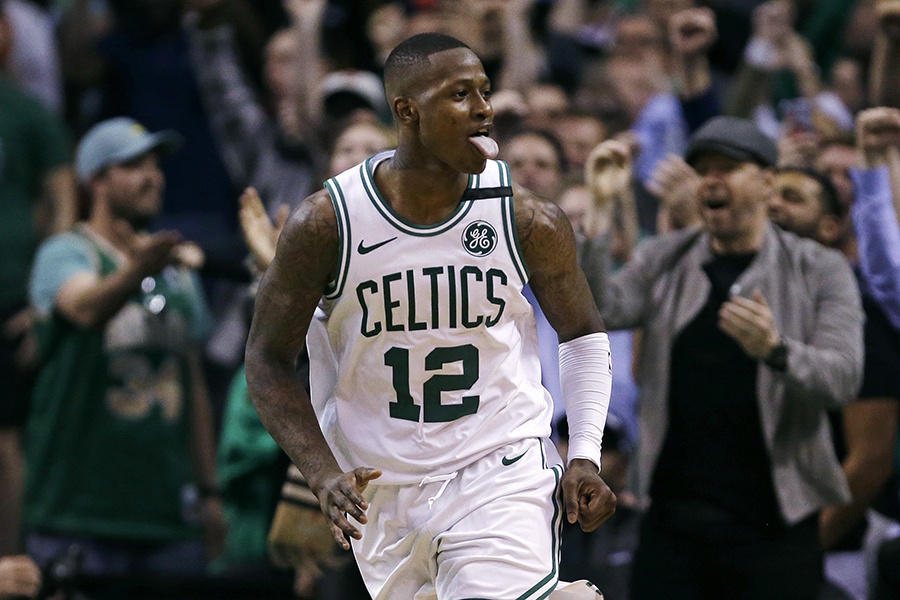 Boston Celtics guard Terry Rozier celebrates after a driving to the basket late in the fourth quarter against the Philadelphia 76ers in Game 5 of an NBA basketball playoff series in Boston, Wednesday, May 9, 2018. Rozier scored 24 points as the Celtics defeated the 76ers 114-112. / AP Photo/Charles Krupa

The Celtics took down the Philadelphia 76ers 114-112 last night to advance to the Eastern Conference Finals against Lebron James’ Cleveland Cavaliers.

The back-and-forth action inside a blisteringly loud TD Garden made for a compelling basketball game, but one of the best parts of the match—and this whole series—has been Terry Rozier. The point guard has been literally filling in the shoes of an injured Kyrie Irving, and he’s proving up to the task: Scary Terry is averaging about 18 points, 6 rebounds, and 5.5 assists in the playoffs.

He’s also been an A+ troll. After mistakenly calling Milwaukee Bucks opponent Eric Bledsoe “Drew Bledsoe” in the first round, Eric dissed Rozier by saying he didn’t know the Celtics’ backup PG, either. TD Garden fans responded appropriately, by digging out their old No. 11 Patriots jerseys and chanting “Who is Eric Bledsoe?” at home games. This—along with Rozier’s lights-out playing—got the attention of Drew Bledsoe, and the pair bonded with some cross-decade, cross-sport, mutual respect.

Rozier rolled into the Garden last week in a vintage No. 11 jersey for the first game of round two against the Sixers. Last night, Bledsoe—who now co-owns Doubleback Winery in Walla Walla, Wash.—was in the crowd for game five, amped and donning a bright green Rozier No. 12 jersey. The unlikely Celtics playoff hero and the Patriots Hall of Famer are officially friends.

After the game, Bledsoe took a seat at the post-game press conference, because of course he did. “It’s been fun going back and forth with Terry, but it’s mostly been fun because the Celtics are playing great basketball,” he said.

Then, Bledsoe suggested something we are going to hold him to: He wants to make a Terry Rosé.

Drew Bledsoe, who owns a winery, comes to the podium and says he will make a “Terry Rosé”, adding “it will have a great finish.” #Celtics pic.twitter.com/MsRo4cg15T

“We’re going to fly [Rozier] out to Washington, and we’ll develop a profile,” Bledsoe said about making a Terry Rosé. “It’s going to have a great finish.”

Game 1 of the Eastern Conference Finals is this Sunday, May 13 at 3:30 p.m., right in the middle of what’s looking like a lovely Mother’s Day and Lilac Sunday here in Boston—basically exactly the kind of day you want to be drinking a refreshing rosé.

We will certainly keep you posted about when you can order Terry Rosé, but in a pinch, there’s a new Boston rosé out now in stores across the city. Cheers, and go Celtics.