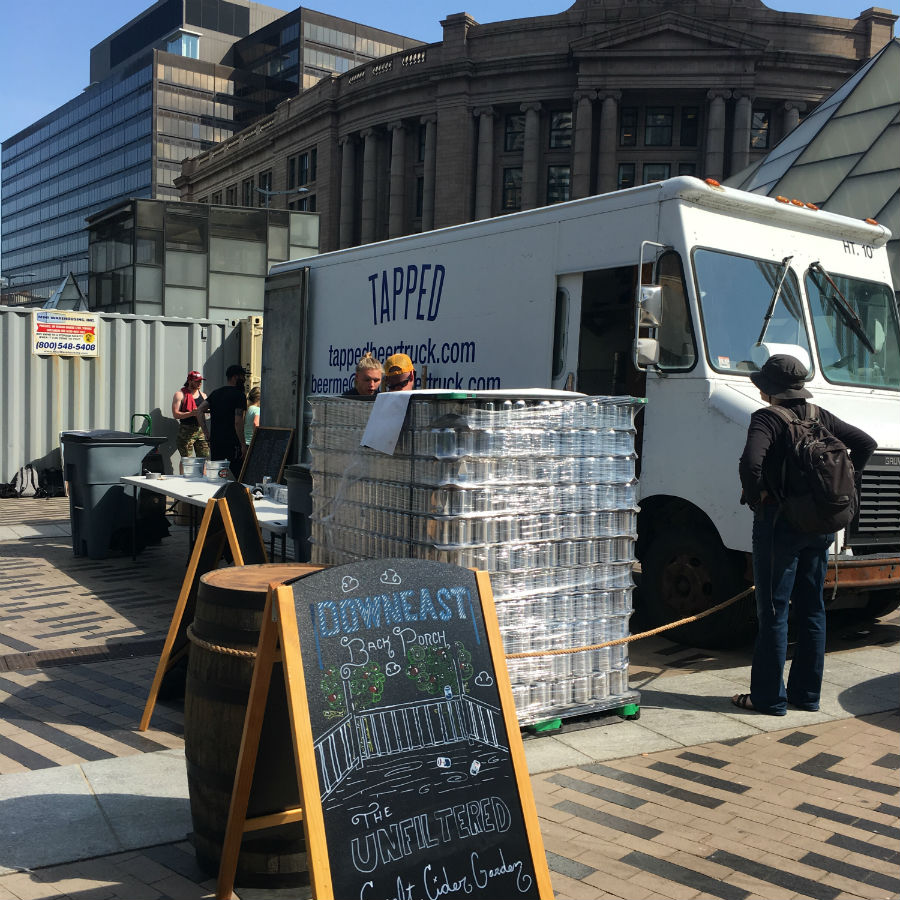 The Downeast Back Porch is a pop-up cider, beer, and wine bar at Dewey Square. / Photos by Jacqueline Cain

Here’s hoping the spring weather is really sticking around this time, because downtown Boston is ready for it. The Rose Kennedy Greenway welcomes two vibrant, open-air bars this week: the Downeast Back Porch is now open at Dewey Square, and the Trillium Garden on the Greenway officially starts pouring on Thursday, May 24.

Every Monday, Wednesday, and Friday evening, and Saturdays and Sundays, East Boston-based Downeast Cider is activating the brick patio across from South Station, where food trucks typically congregate. There are a few tables and some permanent benches within the Back Porch’s confines, and acoustic live music will set up on site every Wednesday and Sunday.

It’s a pop-up setup, as this space is also home to the Greenway’s farmers market and other events throughout the week—so Downeast’s lawn games, signage, standing barrels, rope fences, and more will get packed up after service every night, says marketing director Nick Lamothe. Tapped Beer Truck, a draft system catering company from the Chubby Chickpea’s Avi Shemtov, is pouring the ciders and beers.

At the Back Porch, guests will find a table for showing ID and purchasing drink tickets, and a separate drink-ordering area. With this arrangement, Downeast is hoping to ensure the drink line itself moves quickly, Lamothe says. All ciders and guests drafts cost one, $7 ticket, and wines from Half Bottle are two tickets.

Lamothe and the Downeast team are partnering with a different New England brewery every week to complement five draft ciders with two beer options. Up first: Night Shift’s new Nite Lite, and Whirlpool.

“Some of the partners we’re teaming up with on the brewery side of things are giving us exclusive or limited products,” Lamothe says. “We want something for everyone. Not only can we diversify our product offering, but it’s a way to showcase the awesome craft brewing industry New England has.”

Check Downeast’s social media every Monday to keep tabs on the brewery of the week.

Less than a half-mile north, the Trillium Garden was getting ready Wednesday afternoon to open on Thursday. In the same location across from Rowes Wharf as it was last summer, the Garden is now extended several yards into the Greenway’s shady Elm Circle. Coupled with a new draft trailer situated differently, the Garden has room for about 50 percent more people this year, says Trillium cofounder JC Tetreault.

Trillium custom-built a new draft trailer this year, with additional tap lines and more cold storage room, so the team can have more beer ready to pour on premise. Expect a rotating lineup of 10-12 beers, plus a white and red wine selection from Westport Rivers.

It’s worth noting last year’s draft trailer is not the one in-use now on Trillium Canton’s outdoor patio. That beer bar is in storage and will come out for “special events. We have other plans in the works,” says Trillium cofounder Esther Tetreault.

Trillium’s wintertime Boston pop-up, the Garden at the Roslindale Substation, hosted several special events with guest breweries like Other Half, Lawson’s Finest Liquids, and Notch. The Tetreaults say that Garden visitors can expect to see “some friends” in town this summer, too.

Greenway food trucks are, and will be, parked in close proximity to both open-air beer bars throughout the season, and both bars have portable restrooms onsite.

At Dewey Square, muralist Shara Hughes is painting this season’s art this weekend, so revelers can watch the action with a cider in hand. Just north of the Trillium Garden, the retro neon sign installation is now lit every day until 10 p.m. 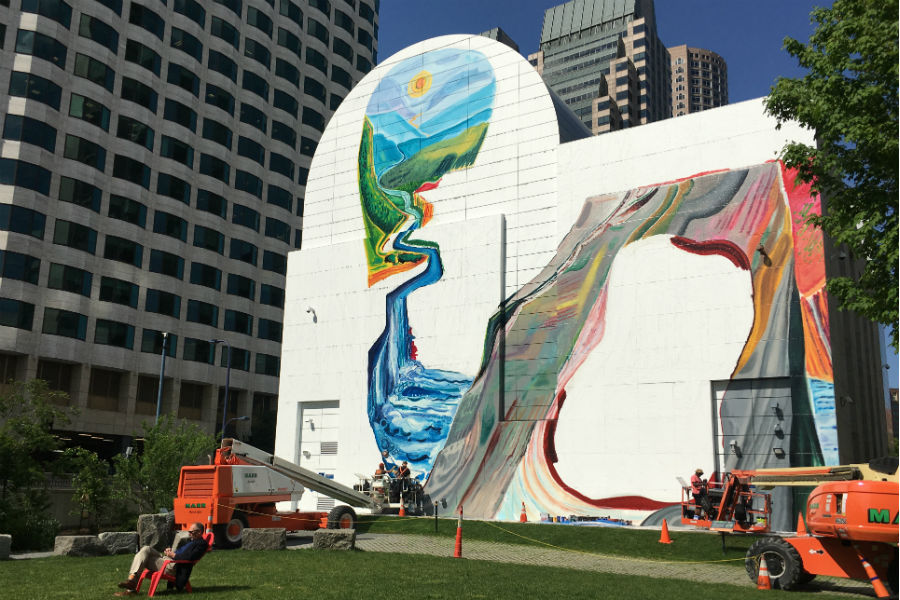 Watch art in action this weekend as the Greenway gets a new mural at Dewey Square. / Photos by Jacqueline Cain 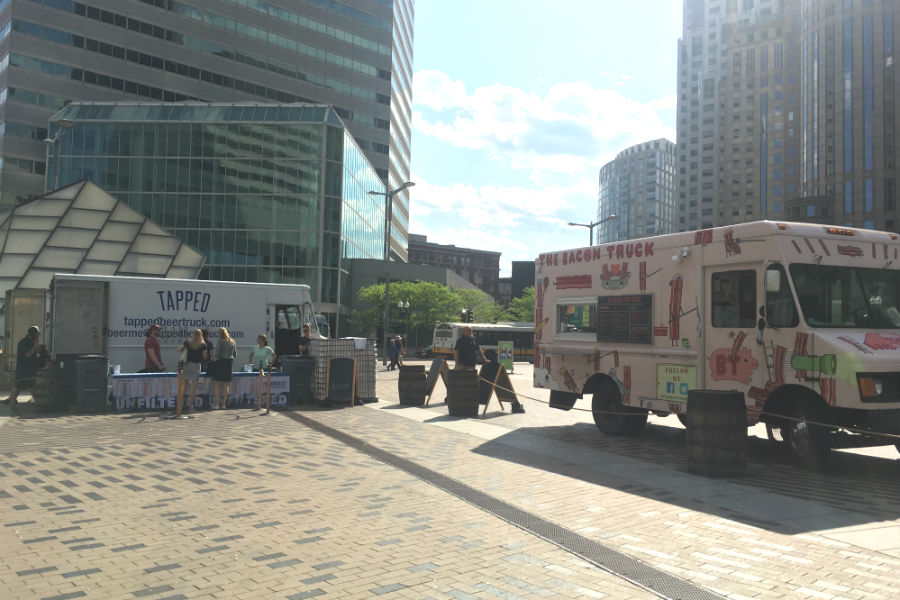 The Downeast Back Porchuses Tapped Beer Truck. It will host food trucks, such as the Bacon Truck, all season / Photos by Jacqueline Cain 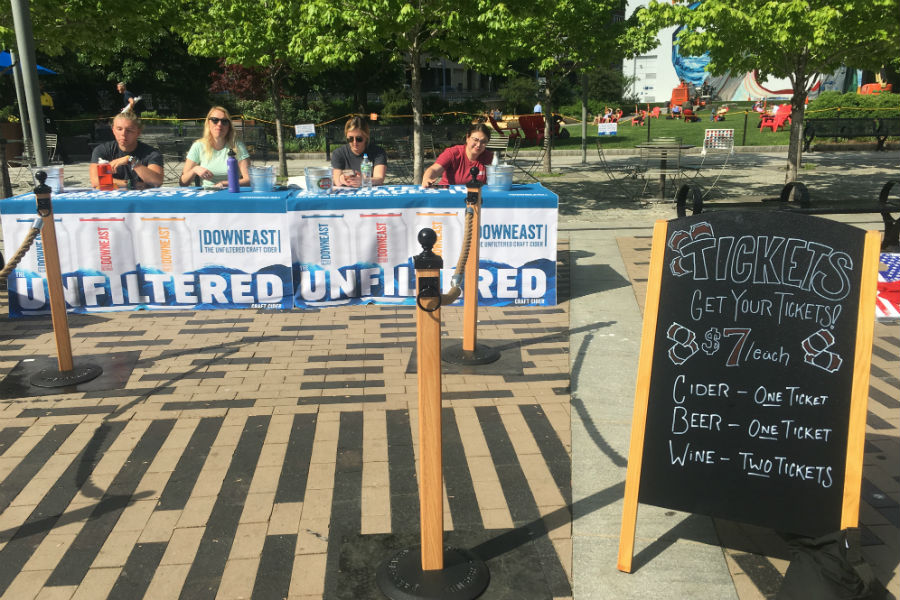 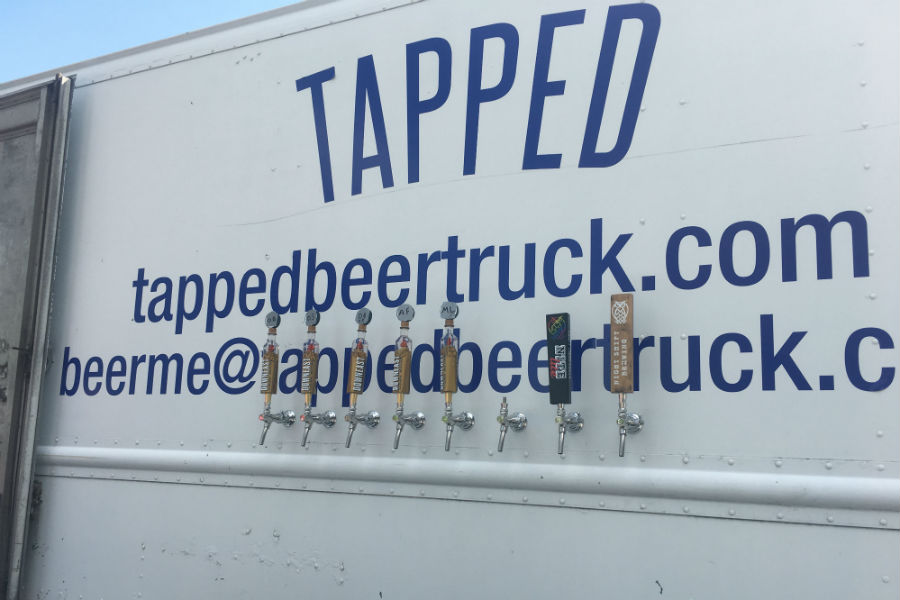 There are five Downeast Ciders on draft, including a Greenway exclusive Mint Lemonade; and guest beers. / Photos by Jacqueline Cain 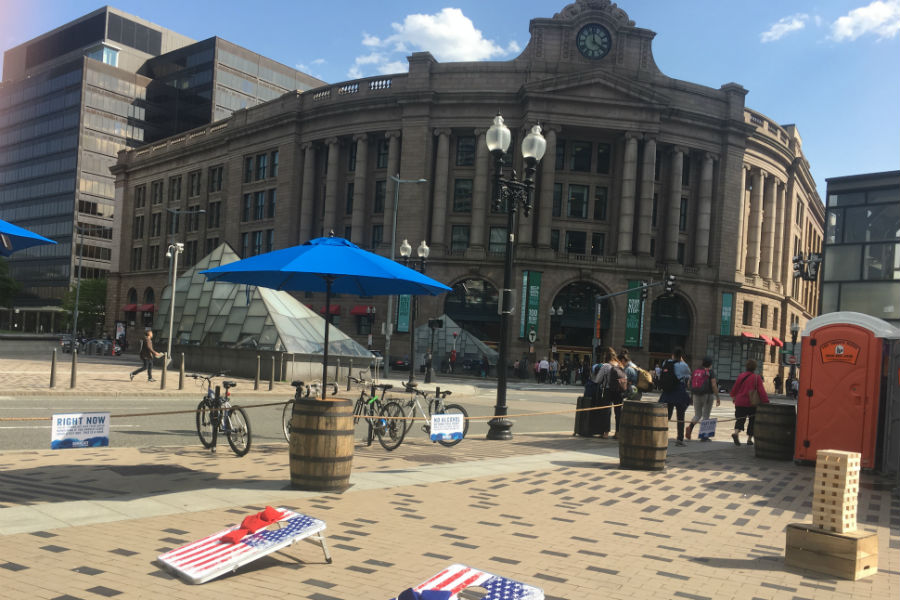 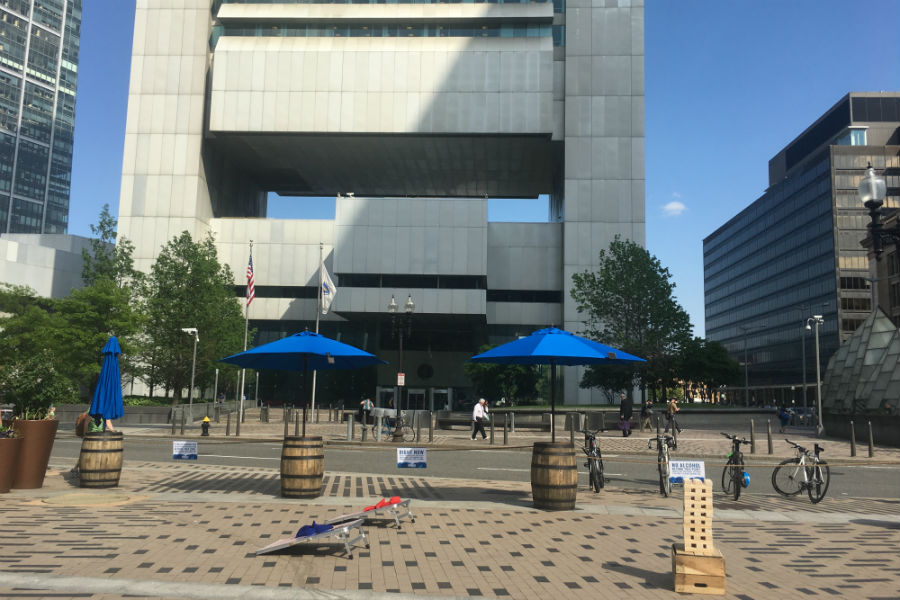 The Downeast Back Porch has cornhole, giant Jenga, and more games / Photos by Jacqueline Cain 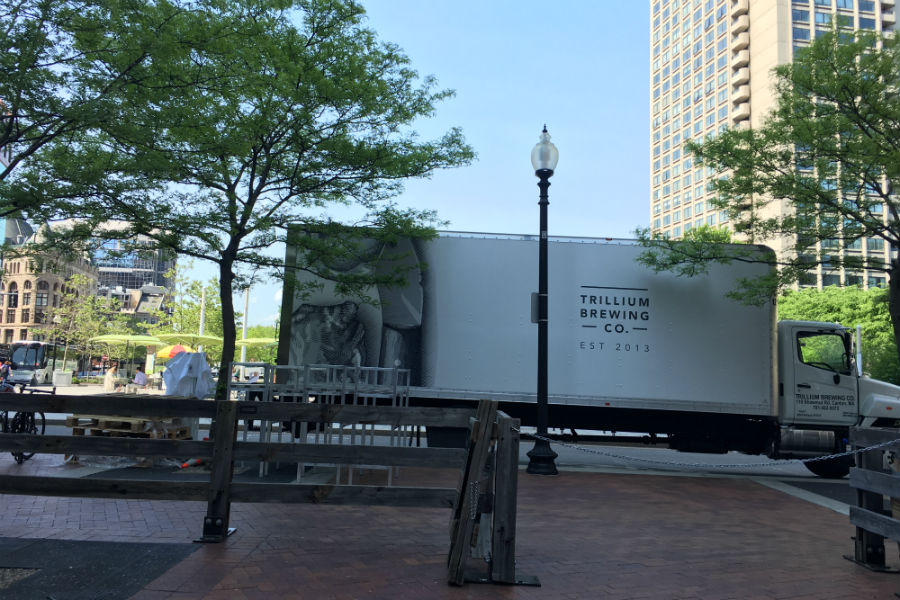 Beer has arrived at the Trillium Garden. / Photos by Jacqueline Cain 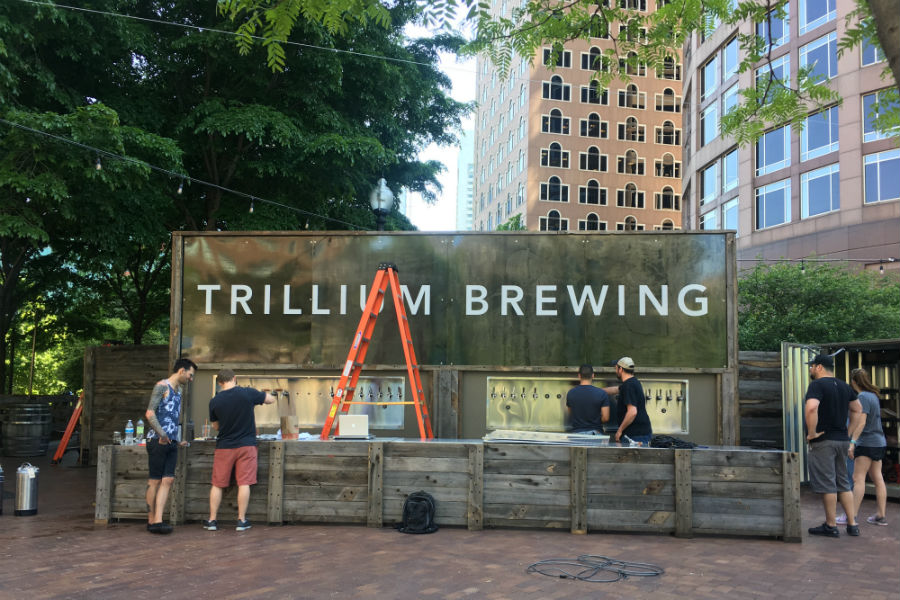 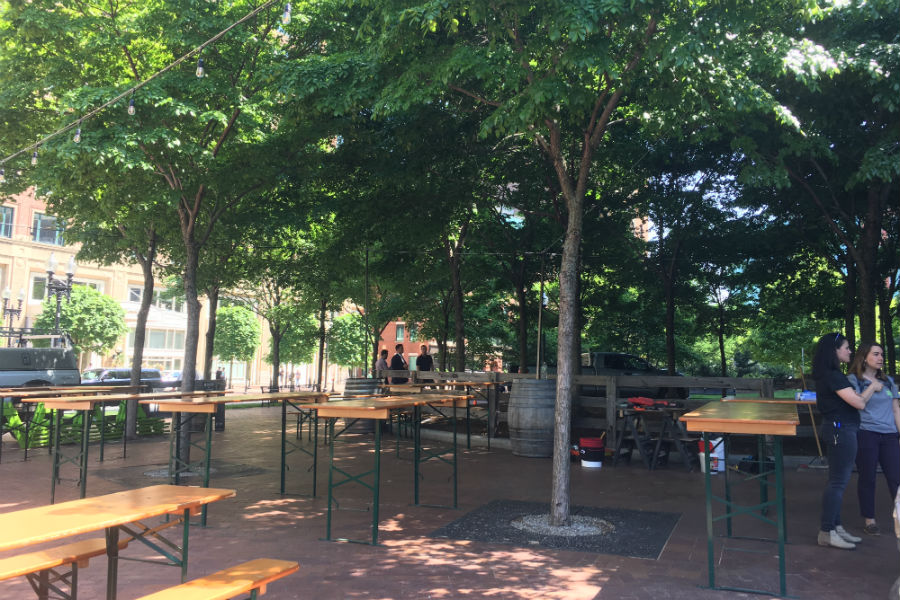 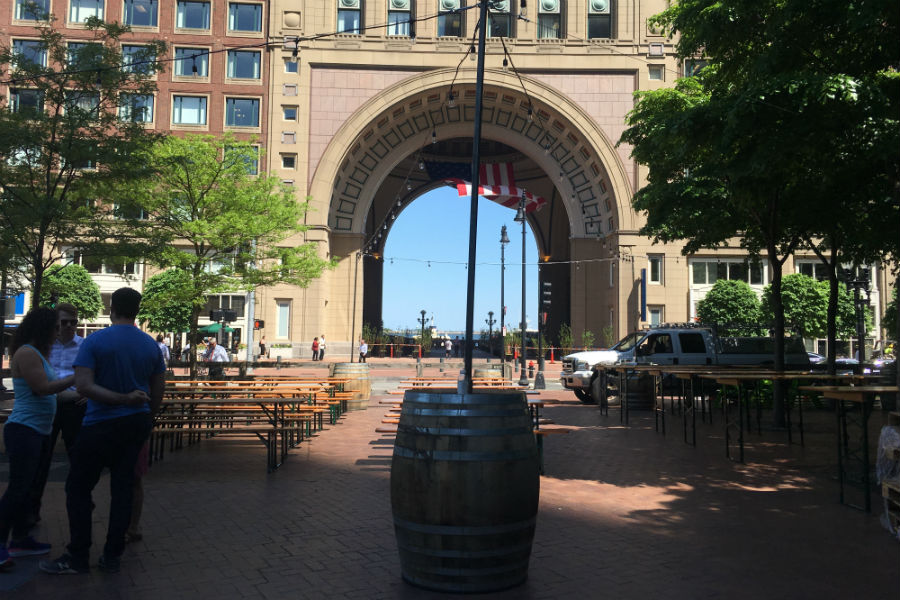 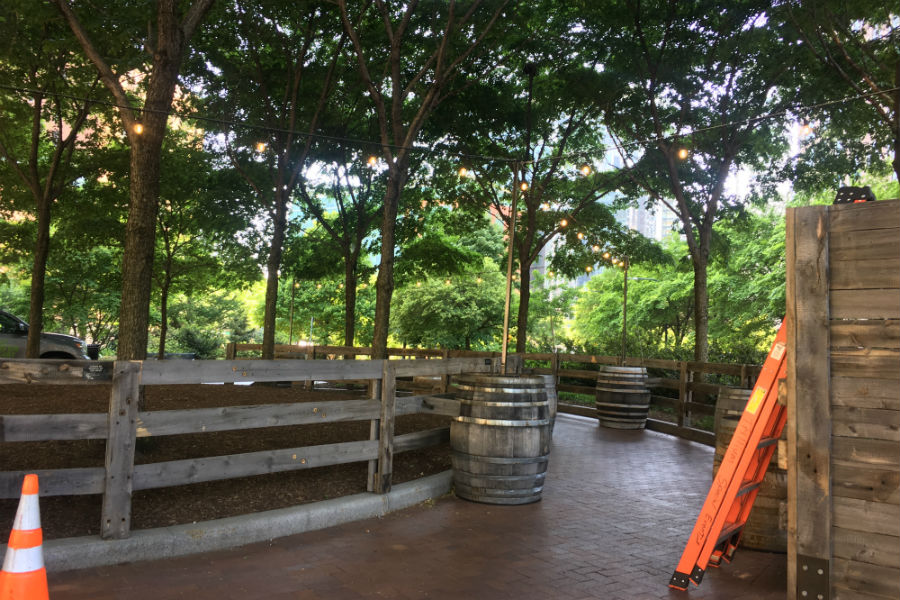 The Trillium Garden on the Greenway has more, shaded space this summer. / Photos by Jacqueline Cain 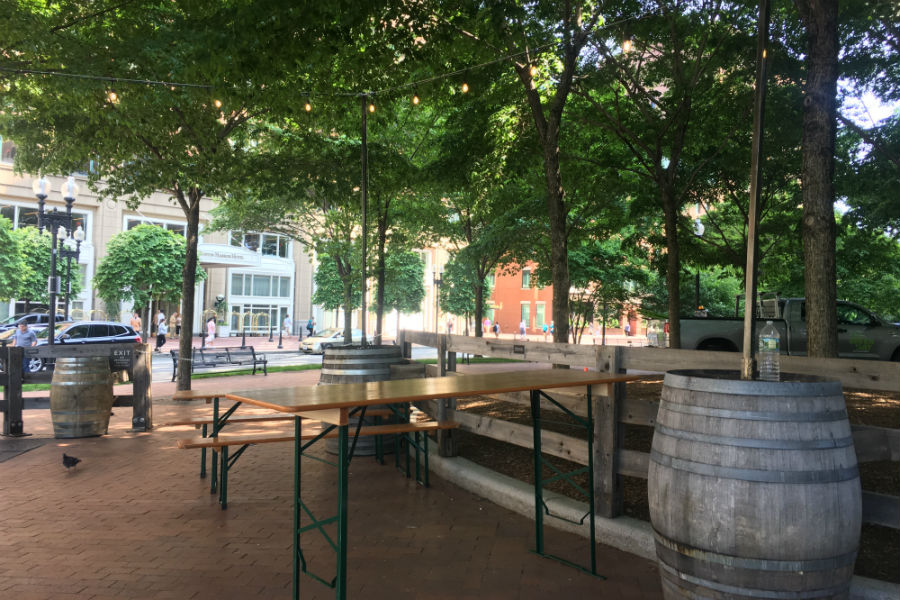