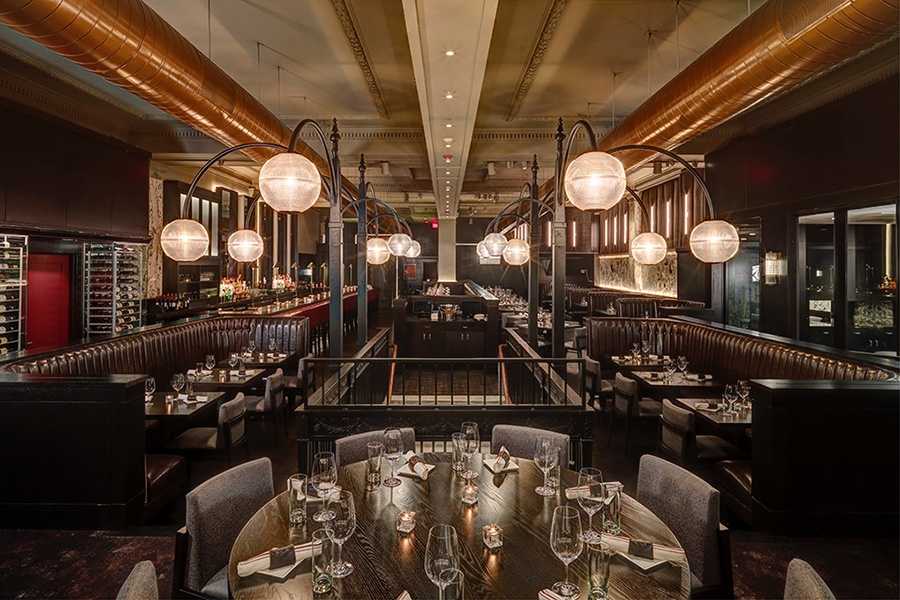 A new restaurant certain to be popular with boardroom and mood board influencers alike, Boston Chops opens a luxe second location this week in Downtown Crossing.

The circa-1890 bank was renovated with “Instagrammable moments” in mind. Reserve the city’s first specifically designed Instagram table, a booth with custom, adjustable lighting; or pose in front of the art, signage, and details like marble walls and intricate millwork. The glam dining rooms have tufted velvet and leather furniture, wrought iron lamps, and vaulted ceilings.

“We didn’t have to think about [social media] when we opened Boston Chops South End five years ago. Now, it is imperative that photos of restaurant interior and food are beautiful when they are posted online by influencers,” says chef/owner Chris Coombs in a press release. “It is a great marketing tool for people to see our food, décor and cocktails and hopefully entice them to check it out for themselves.”

Boston Chops Downtown also takes advantage of its location, capitalizing on a relative lack of high-end dining options in the developing, centrally located neighborhood. Boston Urban Hospitality, which also operates DBar in Dorchester, and Deuxave in the Back Bay, made moves on the former Mantra nightclub space “after seeing the development plans and revitalization of that neighborhood,” partner Brian Piccini says in a press release. “It seems like a perfect place for a steakhouse concept to cater to businesspeople, theater-goers, neighbors and tourists.”

The lower level of dining is comprised of two spaces (one with its own bar) that can be sectioned off for private and semi-private dinners, receptions, and meetings; and there’s a private space next to the main dining room. Boston Chops Downtown can host events from 20 people to 300-plus.

The bar has a lengthy list of wines by the glass and bottle, plus classic and signature cocktails, and craft beer on draft. At dinner, the fare is similar to its South End sibling’s, with an extensive raw bar, prime steaks and offal, elevated steakhouse sides like poutine-style twice-baked loaded potato, pork belly mac and cheese, and creamed spinach gratiné; and more.

There are composed entrées like a Carolina dry-rubbed pork chop with braised greens, corn bread, and glazed apples; Chilean sea bass with grilled spring onions, farro, fava beans, mushrooms, and Meyer lemon; and pappardelle Bolognese. It also has a full, weekday lunch menu with sandwiches, salads, and a two-course “power lunch” option. Check it out in full below. 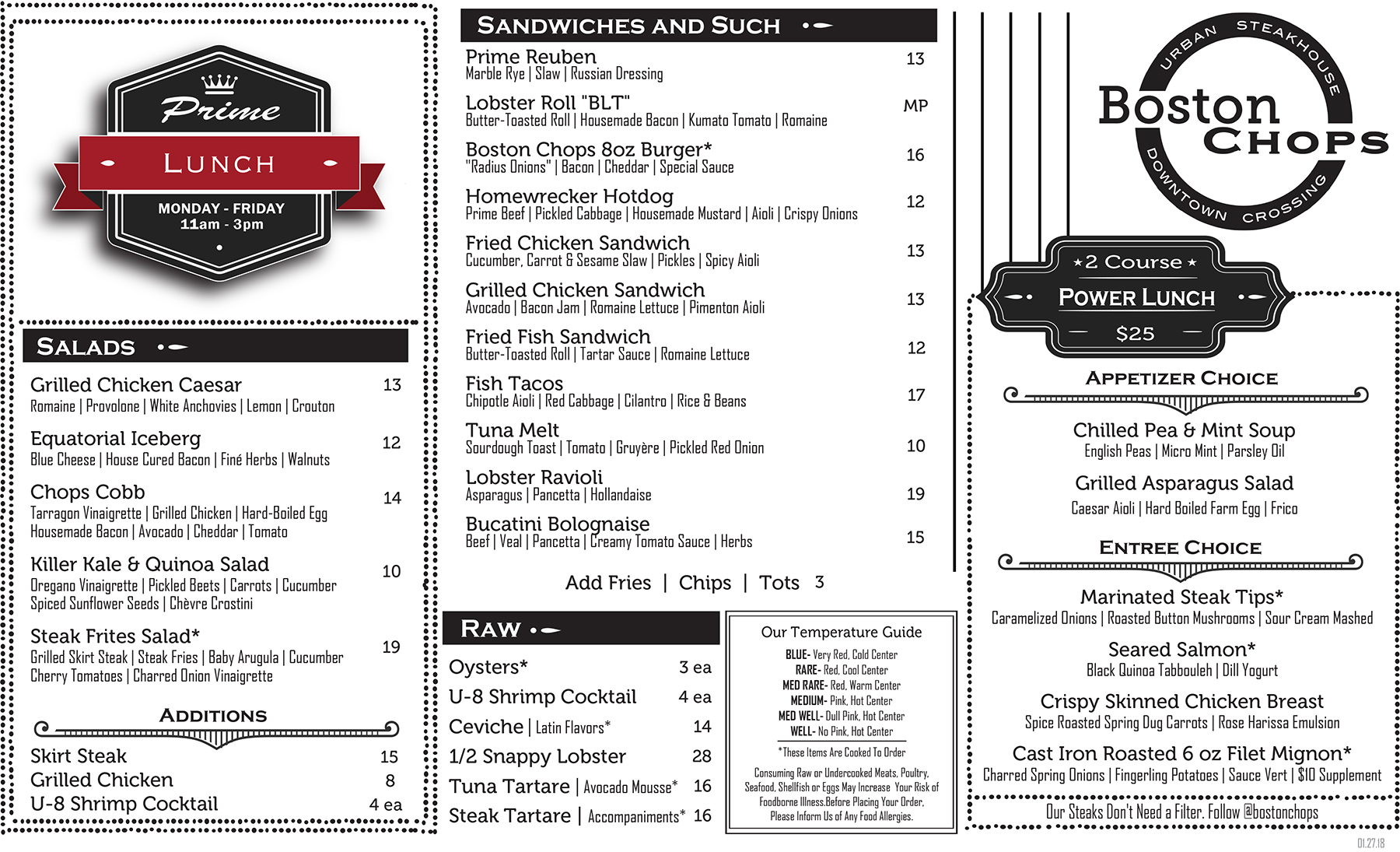 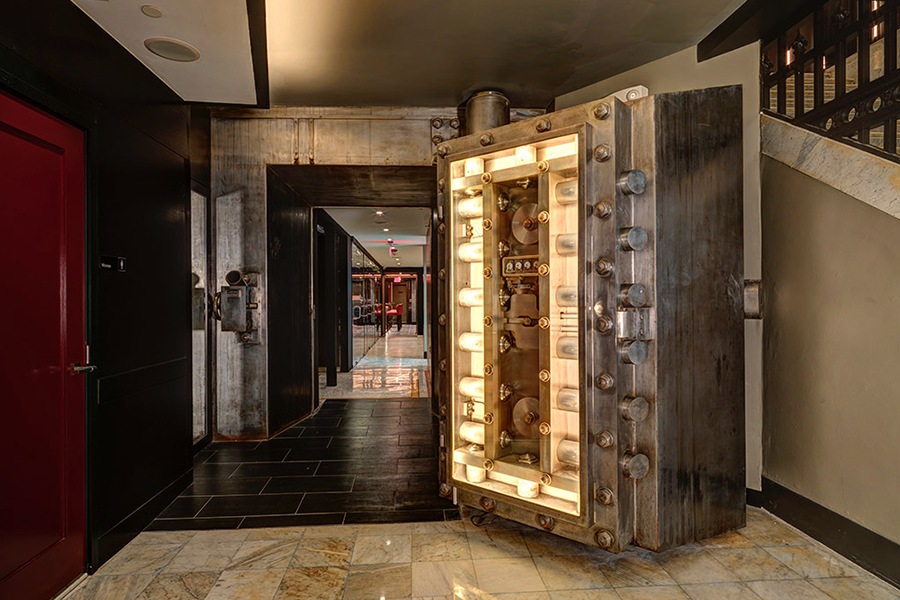 The entrance to the vault of private dining rooms at Boston Chops, in Downtown Crossing / Photo by Andy Ryan 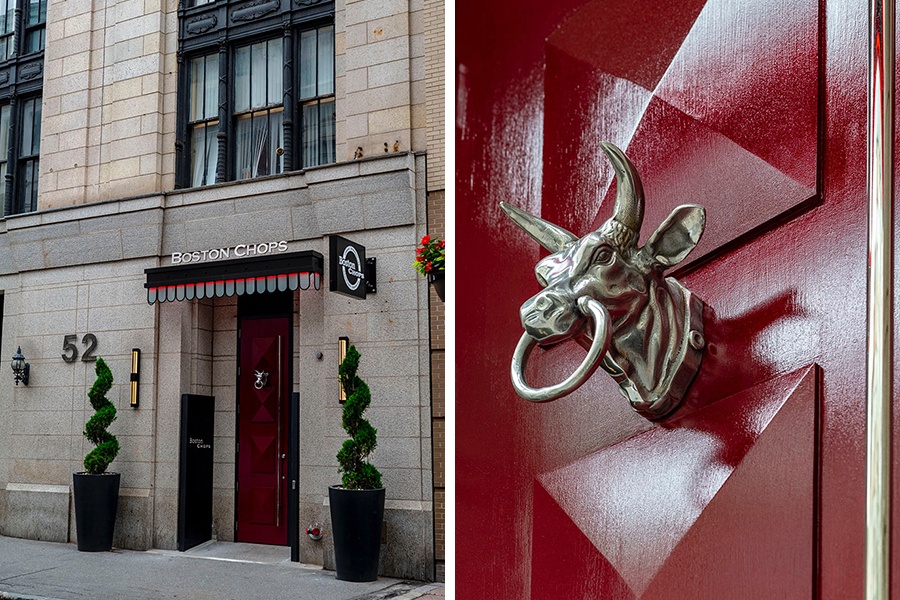 The entrance to Boston Chops in Downtown Crossing. / Photos by Andy Ryan