Does this Jewish deli/modern Israeli meze spot have the best pastrami sandwich on the East Coast? 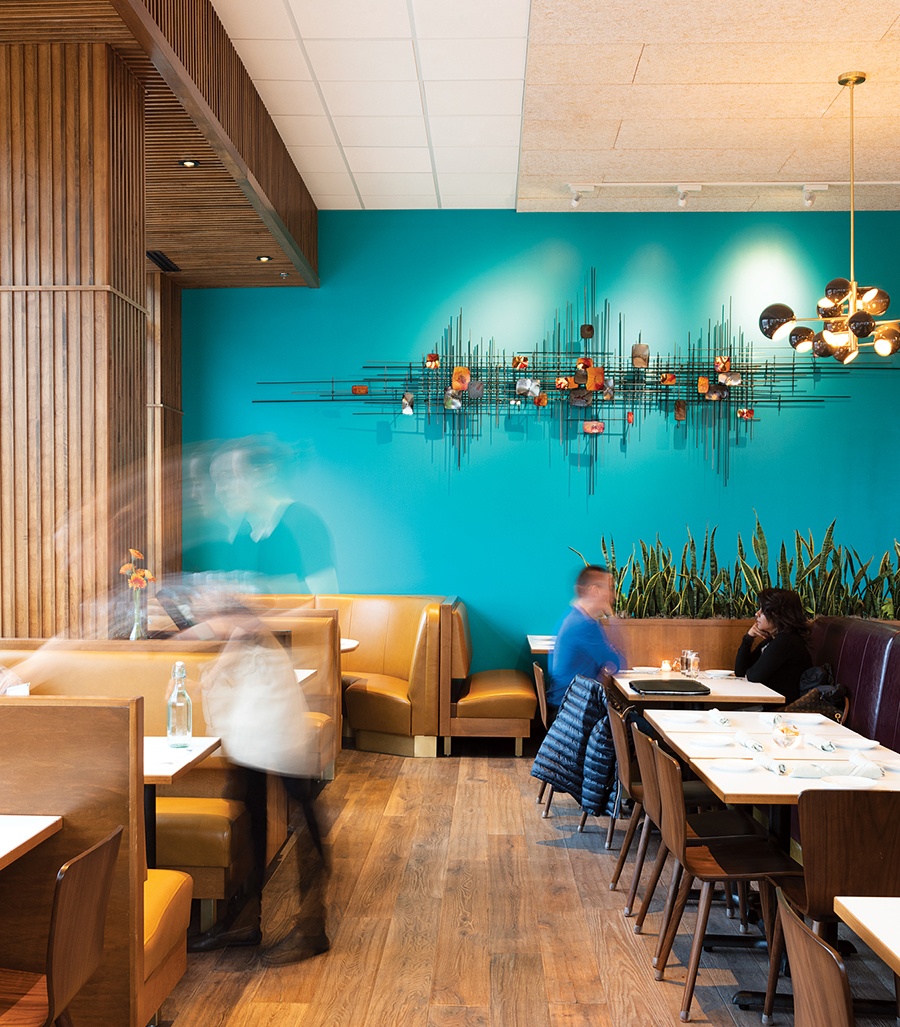 The pastrami ($15) at Our Fathers in Lower Allston isn’t just good. It is exceptional. Cut by hand into thick, smoky, salt-plumped slabs from the gnarly navel side of the brisket, the cardamom-crusted beauty is so riddled with translucent rivulets of soft, globular marbling that flesh and fat become indistinguishable. When art writers talk about Paul Cézanne’s paintings of the 1880s, they use the French word passage to describe the blurring of foreground and background, the melting of contours, he achieved with faceted patches of fluttering brush strokes. This would be shimmering passages of unctuous meat.

That’s right. We’re talking some serious Cézanne-level excellence right here. The first time I tried it, I spent the rest of the night offering every Katz’s snob a free sandwich if they’d go check it out for comparison. Ultimately, the Lower East Side stalwart squeaked by in a 5–4 nail biter. But the fact that we’re even having this conversation about Boston pastrami is pretty damned exhilarating.

Available in the dining room and at the adjoining retail deli, the pastrami is so good, in fact, you could build an entire restaurant around it. For better or worse, that’s not how we do Jewish food in Boston. A lifeline to an underserved community, here our Jewish restaurants are still in jack-of-all-trades mode: family-friendly greasy spoons with a Yiddish accent where you can have your latkes with a side of chili cheese fries. Historically speaking, this has not been a recipe for excellence. That all changed when Mamaleh’s opened in 2016, abruptly shaking Boston out of its diner doldrums and instantly becoming the best Deli/Bakery/Cured Fish Counter/Soda Shop/Cocktail Bar in the city.

Our Fathers offers a different, though partially overlapping, format: Deli/Gin Bar/Meze Stall/Modern Israeli Neighborhood Bistro. In this case, it’s by David DuBois’s restaurant group (Franklin Café, Citizen Public House), so you know what to expect: an unpretentious neighborhood spot that caters to dining scenesters and late-night revelers, with staffers clued in enough not to piss off the industry crowd that flocks there. And—always—an excellent bar. When Citizen opened in 2010, it instantly became the best brown-booze destination in town. Our Fathers swaps suits, with a 100-deep roster of gins, plus a few dozen cocktails to showcase them. 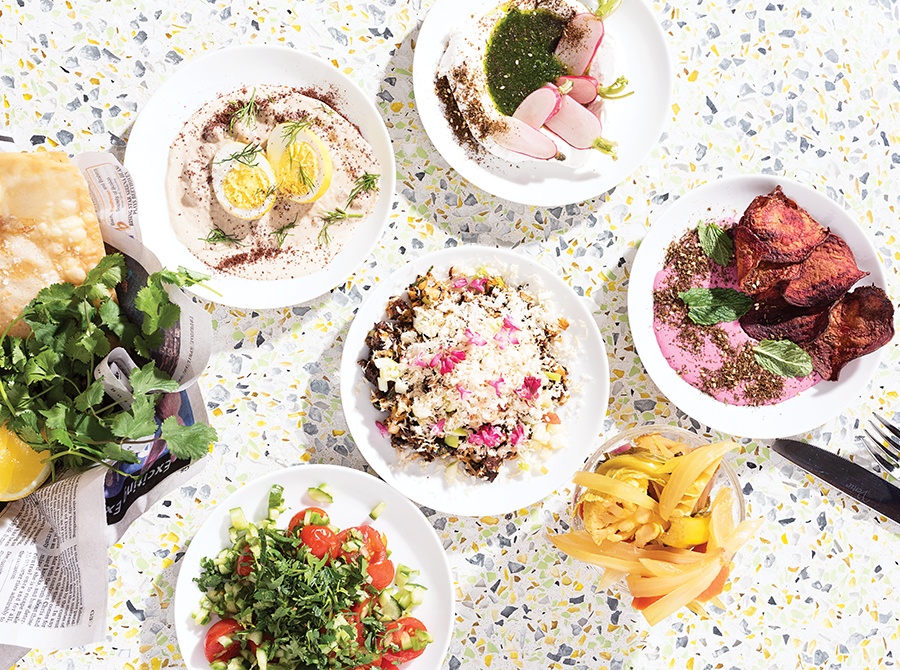 A fiver of meze dips. / Photograph by Emily Sotomayor

Chef Jameson Poll’s menu starts off with a bang, with five meze spreads accompanied by hot, airy markouk flatbread. Creamy labne ($8) was ratcheted up to a gorgeous intensity with fiery green schug hot sauce, za’atar, and radish halves. Silky beet tehina ($7) packed deep flavor, the earthy headliner salt-baked, puréed, then folded with sesame paste and scattered with lemony sumac, mint, and paper-thin beet crisps. Poll worked for a spell at the Manhattan outpost of Dizengoff—the acclaimed haute-hummus takeout stall by Michael Solomonov, whose Philly restaurant Zahav has been at the vanguard of the modern-Israeli craze—and these gorgeously plated dips evince the confidence of a chef who knows exactly where the national conversation is.

Things get wobblier with the small plates and entrée-size “large plates”: a mix of spruced-up traditional recipes and improvised noodling around in the key of Red Sea. As a general rule, the spruce-ups were stronger, but there were winners in both modes. Hot, flaky bourekas ($12), the Israeli take on samosas, were filled with spinach and local farm cheese, showered with dukkah (a spice blend bulked up with sesame seeds), and doused with schug. Every time I’m ready to call out octopus ($13) for jumping the shark, a flawless rendition like this one—luxuriously tender with a crusty exterior, served on smoky baba ghanouj with preserved lemon peel and green olives—coaxes me back from the ledge. On the large-plate side of things, I can’t think of a steak that feels more right-this-second than Poll’s entrecôte ($25), a thick block of sirloin hit hard on the plancha and dropped onto a bright-toned pesto made from toasted peanuts, bitter rapini, horseradish, and Aleppo.

Speaking of nowness, there may be no more au courant restaurant type than Modern Riffs on X Cuisine. As the best and brightest of our local talent tackle it (Doretta [since closed] and Ruka, among others), I’ve noticed a pattern of challenges inherent in the genre: how to sustain sparkle and energy across a 30-item menu without venturing beyond the traditional color palette of the inspirational cuisine. My biggest beef with Our Fathers is that if you sit there long enough, you start wondering whether the only reason the lamb-crudo-style kibbe naya ($14) got stuck with the odd apple, horseradish, and mint plating was because the savory baharat-and-izak outfit had already been doled out to the bone-marrow lentils ($15). The large plates felt less like explorations of Israeli cooking than neighborhood-spot mainstay proteins (duck breast, salmon, cod) all dressed in similar regional garb. In the year 2018, even Franklin Café serves sumac-roasted chicken.

A few dishes could use straight-up rethinking. Lamb kofte on cinnamon stick “skewers” ($13) was a cute idea, but the intensity of the spice—plus the clove and allspice in the baharat—made it nearly inedible. Seared chicken livers ($11) with parsnip cream and raisin-walnut dressing looked and tasted…as good as that sounds. And if “Yemenite” matzo ball soup (starting at $7) really has that much cumin, the broth probably needs to be richer.

And yet sometimes the bigger picture tells more of a story than the subscores. Let’s see…we’re looking at an off-the-charts gin bar in a comfortable midcentury-modern space, where servers are willing to fetch you Zahav-caliber meze spreads and Katz’s-rivaling hot pastrami just for the asking! I can think of worse ways to spend a Tuesday or, you know, a milestone anniversary. DuBois has always gravitated toward emerging neighborhoods—late-’90s South End for Franklin, the about-to-gentrify Fenway for Citizen, and now Lower Allston. The long-suffering foodies I know who live or work there are viscerally giddy over their sudden change of fortune, and I don’t blame them one bit. 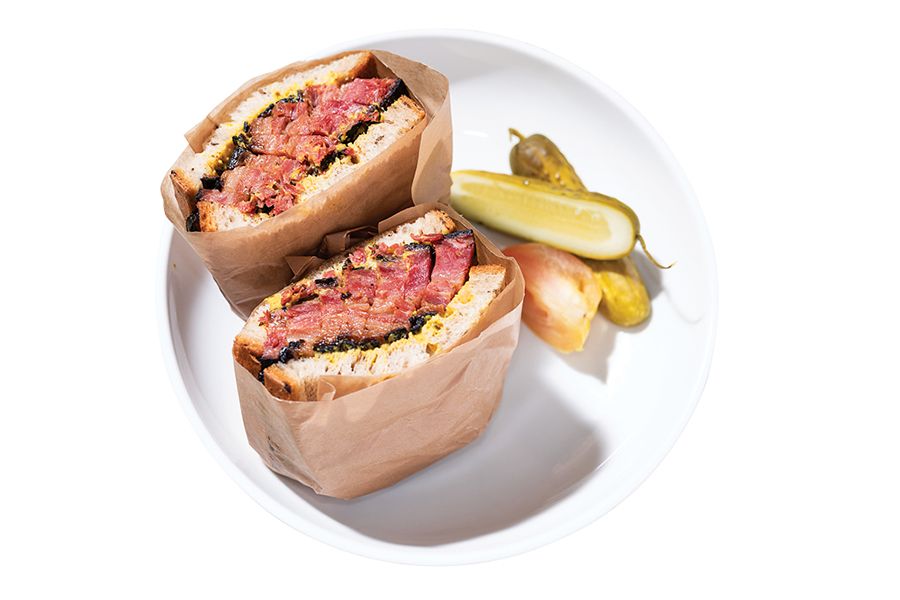 The hot pastrami sandwich in all its postimpressionist glory. / Photograph by Emily Sotomayor