Would you give up your beloved on-the-go breakfast for a convincing, meat-free substitute? 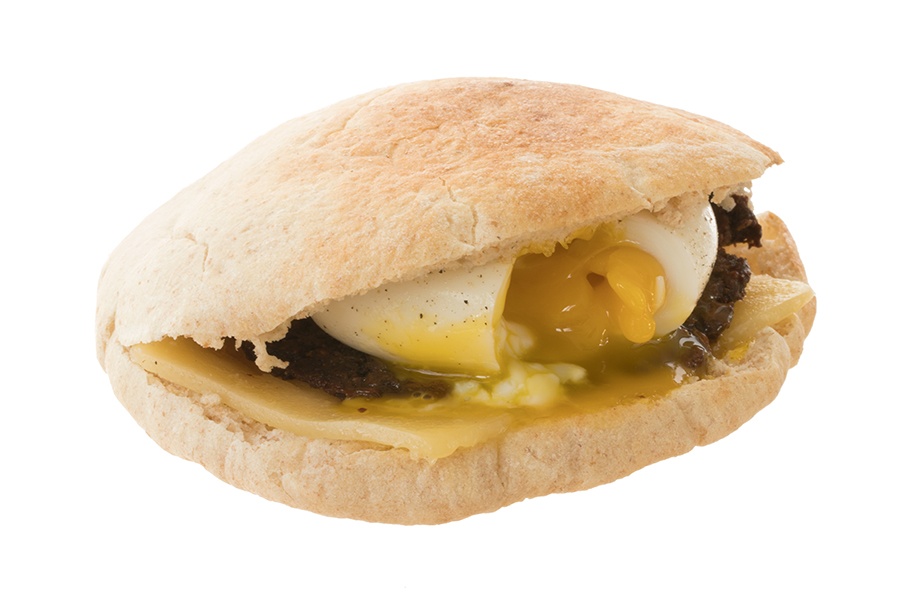 Clover debuts its Impossible sausage breakfast sandwich at all locations this week. / Photo provided by Clover

When Clover became the first Boston-area restaurant group to roll out the vegetarian meat substitute called Impossible Burger last year, it was not without considerable thought.

“We’re really trying to turn meat lovers into veggie lovers,” says Clover founder Ayr Muir—meaning, Clover’s goal is to get omnivores to crave something like a carrot sandwich, not to get vegetarians to crave a beef substitute.

Impossible “beef” is lab-derived from ingredients like textured wheat protein, coconut oil, and potato protein, plus an iron-containing molecule known as “heme” that gives it medium-rare-like qualities—in other words, that makes the Impossible burger “bleed.”

“We weren’t sure where it would fit for Clover,” Ayr says. A burger isn’t something he imagines on Clover’s menu, let alone the best burger money can buy, which is always Muir’s goal with new menu items, he says. But meatballs? Meatballs, they could do.

Since launching last September, Clover’s $13 meatball pita sandwich, with marinara and Parmesan, has proven crazy popular, the company says. In the fall, a contractor who works on Clover’s new restaurants suggested Muir and team try their hand at an Impossible breakfast sandwich. After several weeks of recipe development and a couple months of testing it on the menu at the 24-hour Central Square location (should we be surprised the breakfast sandwich sold best from midnight-4 a.m.? Certainly not), the Impossible sausage, egg, and cheese is finally ready for the masses.

It hits Clover menus on Wednesday, June 6, and to celebrate, the company is giving away 500 sandwiches to early risers in Boston, Cambridge, and Burlington. The first 50 guests at 10 locations, listed below, can get a free Impossible sausage breakfast sandwich between 7-9 a.m., or until sellout.

Clover is up front about the fact that Impossible is the most expensive product it purchases, and the breakfast sandwich is $8.64, before taxes.

“What we’re trying to do is not only create a great food that can be appreciated in its own right, but also to do something that’s going to really transform the food world,” says Impossible CEO Patrick Brown. Making the product takes 25 percent of the water and 5 percent of the land required to raise beef, per company statistics.

For that reason, Boston is a big market for the Silicon Valley-based startup, with its huge student population. “Young people and students are much more receptive to aspirational projects like ours, and also more receptive to new foods,” Brown says.

Little Donkey, Mike & Patty’s, Wahlburgers, Kings Dining and Entertainment, and dozens more Massachusetts restaurants now carry Impossible beef. Earls debuts an Impossible Burger at its Prudential Center location on Wednesday. The startup has received nearly $400 million in funding since it started in 2011, and in April, Impossible launched in Asia, its first international market.

Impossible’s stated goal is to replace all animal-derived food products by 2035, Brown says—a lofty one, certainly. But, one way to convince Bostonians there can be another way to eat might just be through our beloved on-the-go breakfast. Could American run on a plant-based, meat-like substitute? Try it for yourself this week at Clover.

Free Impossible sausage, egg, and cheese sandwiches to the first 50 customers at each of these Clover locations on Wednesday, June 6, from 7-9 a.m. or while supplies last: