It airs on Father's Day, which is awesomely ironic for the new dad. 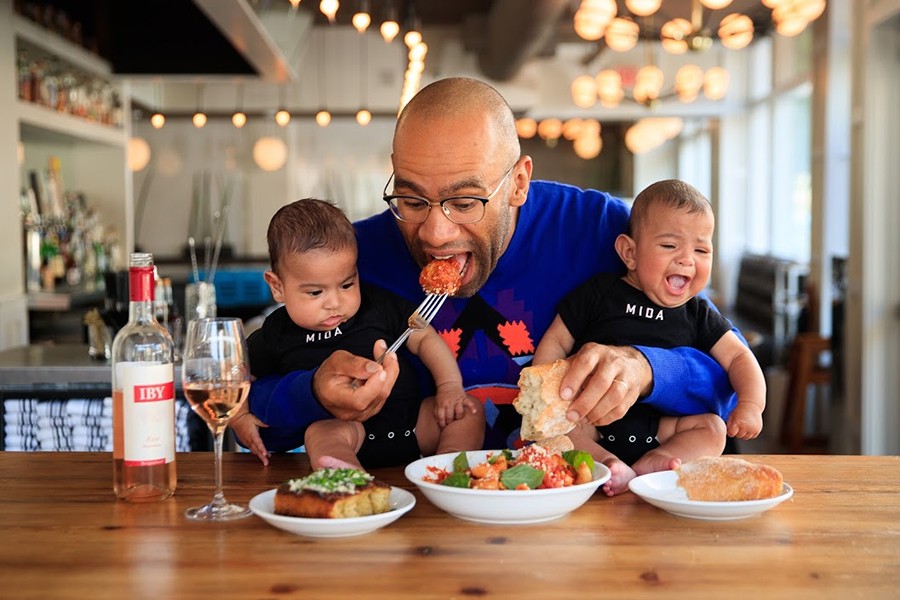 A parent’s first Father’s Day is always likely to be memorable, but for Douglass Williams, it will be especially so. The chef and owner of Mida restaurant in the South End, Williams is celebrating his first Father’s Day as a dad to twin boys, Raffa and Lev—and it’s also his network television debut. Williams competes on the Food Network’s Iron Chef America on Sunday night, June 17.

His episode premiering on Father’s Day is completely coincidental, but it’s ironically fitting. As Williams and his sous chefs were preparing to fly out to Los Angeles to film the show earlier this year, his wife, Debra Freeman, went into labor—several weeks early.

“They could have rightfully stayed in the belly, and it wouldn’t have been an issue,” says Williams, laughing now that he knows everything turned out great. “When I got back, [it was just] three days later we had the babies.”

Shooting Iron Chef America was a great experience for Williams, he says, though it was stressful getting out there. Each Iron Chef competitor is allowed to bring two sous chefs to help during the competition, and Williams enlisted New York City-based chef Peter Boboris, a former coworker at Corton; and Seizi Imura, a longtime friend and chef-owner at Café Sushi.

Imura brought quick knife skills to the team, and Boboris kept them on track during the strict one-hour competition, Williams says. Both sous chefs will be featured on the show.

“It’s dead silent on set. All you hear is time ticking in your head,” Williams says. “Honestly, it was a good amount of time. Everyone says it’s so short, but Peter had it so dialed into the half-minute.”

Season 13 of the show premiered on May 20, and it’s again hosted by Alton Brown, with Chairman Marc Dacascos. In his episode, Williams is up against Iron Chef Alexandra Guarnaschelli. A huge fan of the Iron Chef empire since the original Japanese version, he would have loved to face Iron Chef Masaharu Morimoto, the only original cast member, but “it’s quite alright,” he says.

“I felt so good, so confident. It was so much fun,” Williams says.

He recalls seeing Iron Chef for the first time as a sophomore in high school, and being captivated. “I was a track and field runner; competition always pulled me in. So I saw it, and I was like, ‘One day, hopefully that’s a thing [for me].’ So when [the Food Network producers] reached out, I just tried to nail it.”

The stress at home “was like extra weight when you’re in the thick of competition,” he says. “But it was nothing but fun.”

Williams plans to watch the episode premiere on Sunday night at home with family, friends, and of course, Raffa and Lev, who are now four and a half months old. Before it airs at 10 p.m., the chef will be on the line at Mida dishing out super-sized portions of spaghetti and meatballs as a $20 Father’s Day special.

“We want it to feel [like] what we think of on Father’s Day: There are kids and family around, big portions, dad feels special and gets a gift at the end,” Williams says. After work, “I want to be at home with my boys, watching myself on TV and I want people to do the same. It’s cool to be poppa.”