Where to Watch the 2018 FIFA World Cup in Boston

Back Bay Social Club, McGreevy's, and Publico are some of the best spots to catch the action this summer. 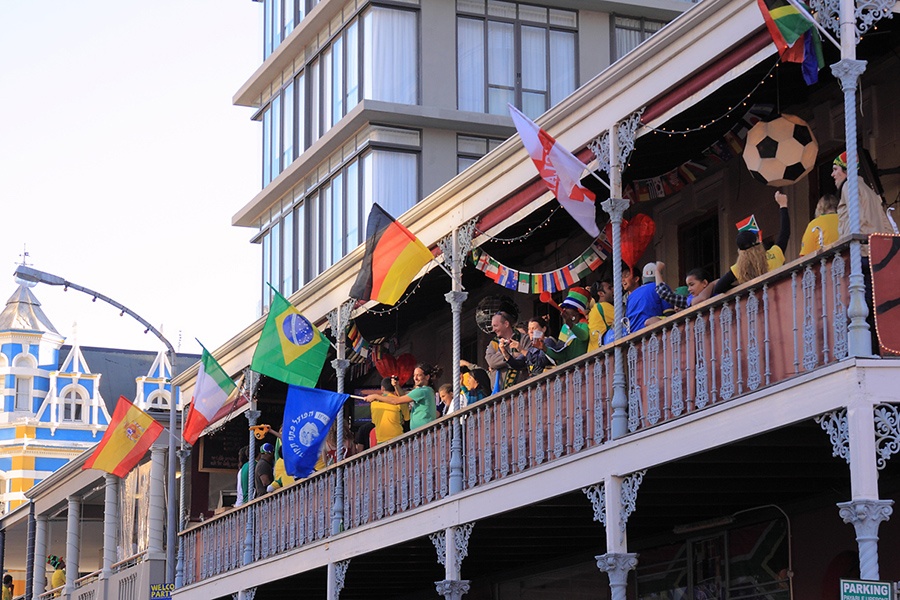 Whether you’re a diehard Messi fan, or you’d rather leave football up to Tom Brady, it’s impossible not to get excited about the largest global, single-sport tournament beginning this week. The 2018 FIFA World Cup is poised to take over the world of sports, with 32 international teams facing off in Russia from June 14 through July 15.

While the U.S. Men’s national soccer team shockingly failed to qualify for the tournament, and despite achingly early kickoffs thanks to the host’s time zone, dozens of Boston bars, restaurants, and cafés are preparing to show the most popular game in the world. Look out, Germany: Brazil wants their Cup back.

Kick off the World Cup with other ardent soccer fans here. Register for an official kickoff party to get in on themed drinks, half-priced apps, giveaways, and, of course, soccer on a giant screen for four big games on opening weekend.

As the official gathering spot for fans of several international soccer leagues, this bar will open extraordinarily early, as is customary, to accommodate all live games. With 10 flat screens spread out over two floors, the Banshee prides itself on broadcasting all the best in U.S and European sports—and that makes it one of Boston’s top sports bars.

This Charlestown restaurant plans to open early on Thursdays and Fridays this month for the 11 a.m. matches, but it also has another surprise up its sleeve. In a boot-shaped beer mug emblazoned with the World Cup logo, sip on Weihenstephan Kristall, a golden wheat beer from the oldest brewery in the world. 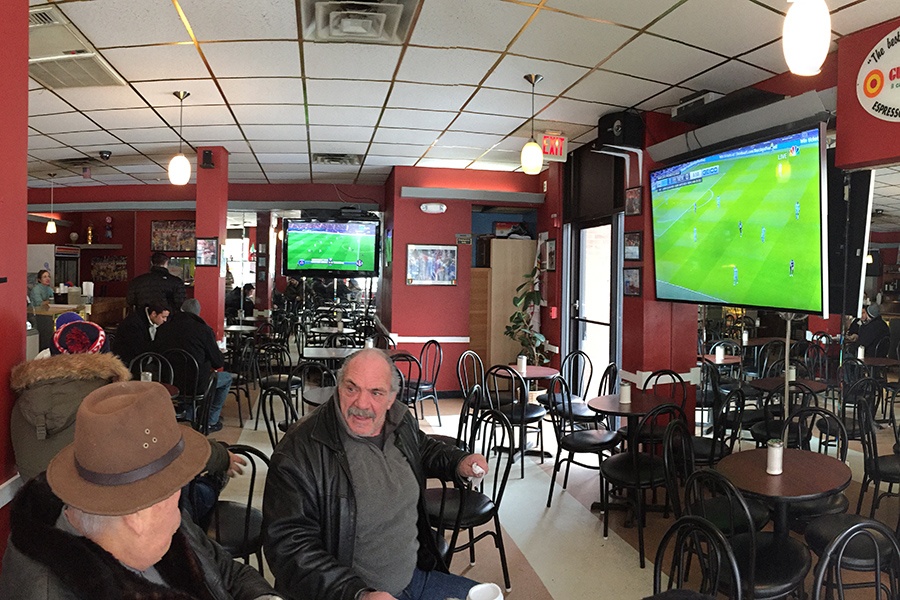 Caffe Dello Sport by The West End on Flickr/Creative Commons

Even though Italy didn’t qualify for the World Cup this year, you can still watch an early morning game of il calcio with a genuine Italian espresso at this quaint, little, cash-only North End café. It opens weekdays at 6 a.m., and at 7 a.m. Saturdays and Sundays.

At Caffé Paradiso, there are plenty of opportunities to catch a soccer game over a scoop of house-made gelato, or an espresso martini. This authentic Italian café is open from 7 a.m.-2 a.m. on the weekends.

From the first floor or the mezzanine level, see the action on Boston’s largest HDTV at this downtown spot—and see why the owners nicknamed their club the “Sistine Chapel of Sports.” Michelangelo didn’t paint it, but the ceiling mural features sports’ greatest hits. The Greatest Bar is hosting World Cup watch parties for the English, French, German, Spanish, and Brazilian teams.

For authentic Scottish cuisine served up by diehard sports fans, swing into this Jamaica Plain gastropub for savory haggis or a deep-fried Mars bar. They’ll be playing most of the World Cup games with sound, and the crowd gets really into it.

Located near Government Center, this pub is a dependable slice of Ireland in the heart of downtown Boston. Open daily at 11 a.m., stop by for an afternoon game and an Irish coffee loaded with thick cream.

What better place to watch the World Cup than on a big screen, underneath 32 international flags? The Lansdowne Pub takes watching the World Cup seriously: Fans are encouraged to wear their team’s jerseys, and there will be giveaways and World Cup merchandise throughout the month. Typically closed before 4 p.m. during the week, doors will open early this World Cup season for afternoon matches.

Executive chef Colton Coburn-Wood is getting excited for the action: Beginning in the Round of 16 on June 30, his menus will combine the flavors of each matchup in creative fusion fare. As a bonus, the Dorchester restaurant will screen live games when it’s open from 11 a.m.-1 a.m. every day.

Enjoy hearty beef stew in the cozy comfort of a traditional Irish watering hole while your favorite teams face off. Find a detailed game schedule online.

It’s only fitting to celebrate the world’s most popular sport at a spot claiming to be America’s first official sports bar. Plan to catch any game on air from 11 a.m.-1 a.m. here, but make sure to stop in on a Sunday to take advantage of their dollar oyster deal. 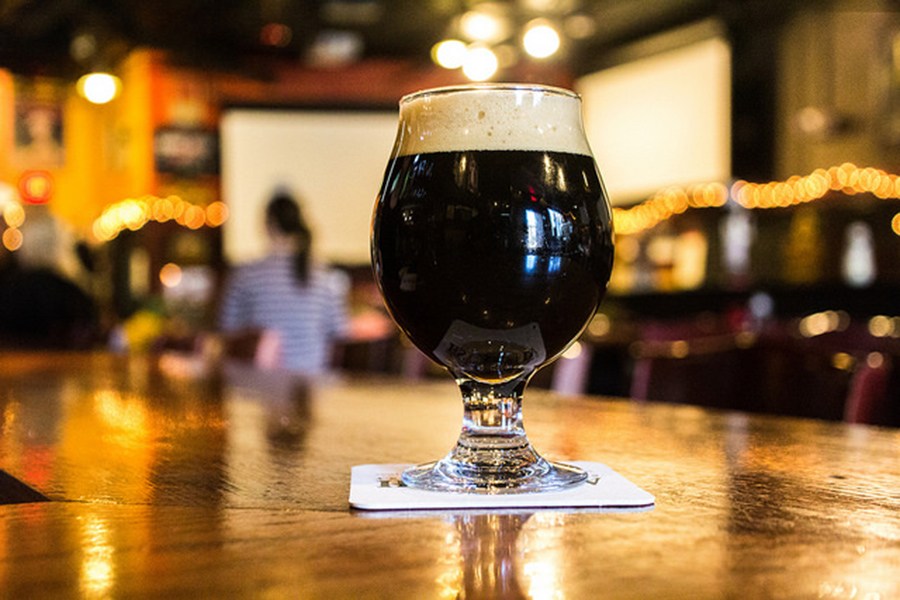 Known for a wide selection of craft beers and unique burgers, Olde Magoun’s is just the spot to post up for a soccer-watching weekend. It will open early Thursdays and Fridays for all the 11 a.m. games this month. With screens all around the restaurant, a good view is guaranteed.

Beginning with Spain and Portugal’s 2 p.m. face-off on Friday, June 15, this stylish Somerville sports bar will open early for select World Cup matches all month. Stay updated on Instagram to see which matches are screening next. 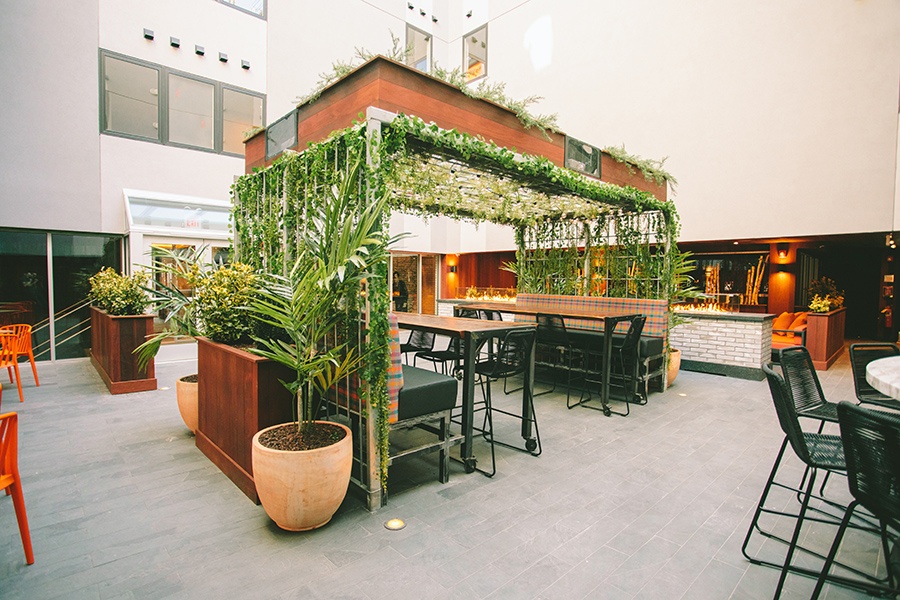 Starting on Thursday, June 14, this Southie restaurant will show repeat games for those of us who aren’t planning to skip work for an 11 a.m. match. On the weekends, catch live games projected onto the white walls of the restaurant’s swanky, open-air courtyard, and on TVs mounted above the fire pits.