How to Shop a Farmers’ Market Like Boston Chef Alex Crabb

Most every day of the Massachusetts growing season, the Asta chef scopes out markets for the freshest fruits and vegetables to feature on that night's tasting menu. We tagged along to glean some produce-shopping tips. 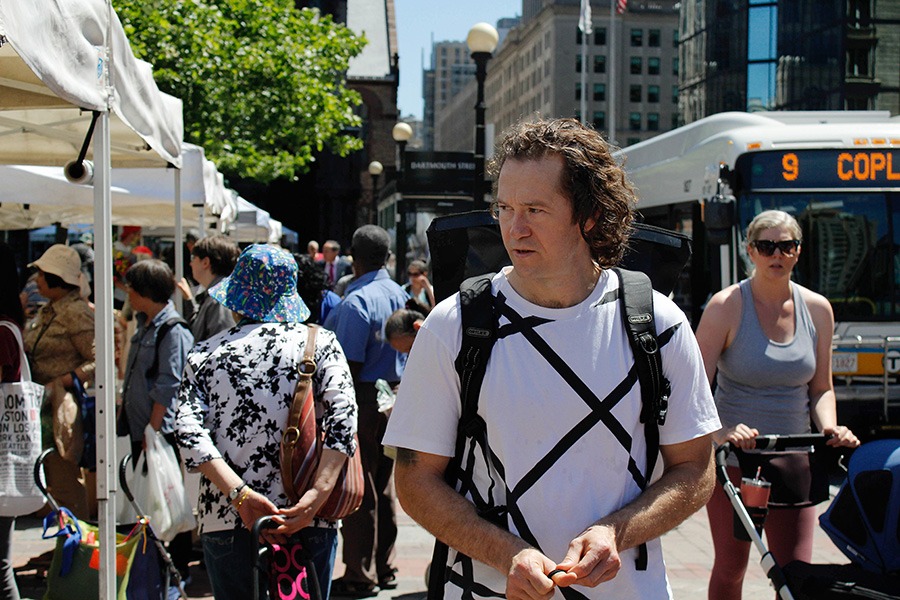 Alex Crabb checks out the scene at the Copley Square Farmers’ Market on Tuesday, June 26. / Photos by Simone Migliori

A few hours before Tuesday dinner service, Asta chef Alexander Crabb wasn’t completely sure what that night’s menu would look like. It would depend on what was looking fresh and delicious at the Copley Square Farmers’ Market—and I was there to watch him figure things out in real time.

The Copley market, held in season every Tuesday and Friday afternoon, is one of several farmers’ markets that Crabb shops weekly to supplement ingredients sourced directly from farmers.

Asta’s “new wave American” cuisine, as Crabb calls it, strives to give an offbeat sense of place in New England. When reviewing the Back Bay restaurant  for Boston magazine, critic Corby Kummer wrote that a particular dish used “ingredients that speak of where you are—but in a new dialect that makes you reconsider what’s around you.”

Crabb says his love for fresh produce borders on a compulsive shopping problem. He’s been a Copley regular for more than a decade, since he was on the line at L’Espalier. He spent seven years under chef and farmer Frank McClelland before opening Asta with partner Shish Parsigian in 2013.

I asked Crabb to show me how he shops the busy, bountiful Copley spread for some summer cooking inspiration.

“When you go to grocery store, you can have a preconceived notion about what you’re going to cook. At a farmers’ market, you can kind of do that with the season, but you really have to leave yourself open,” he said.

Crabb began this day with a $100 cash budget. Before buying anything, he starts every shopping trip with a full loop around the marketplace to scope things out. There is some structure to Asta’s seasonal five- and eight-course tasting menus, but on this particular Tuesday, Crabb had two “holes,” or dishes ready to be totally reimagined, and he was looking for produce to inspire what those new plates might be.

But, “we can totally change things up if I become completely enamored with something here. Like all these little squash,” he added, eyeing some pale green Kousa squash at the Dick’s Market Gardens stall. “I think it might be a course tonight. And the beans are popping off…” Crabb wandered over to a verdant display of snap peas and plump favas at Siena Farms. 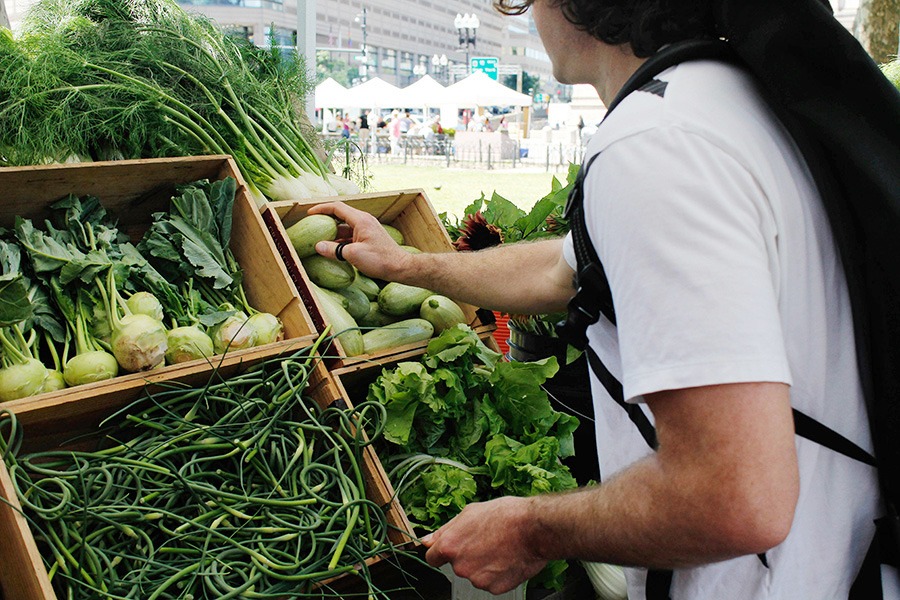 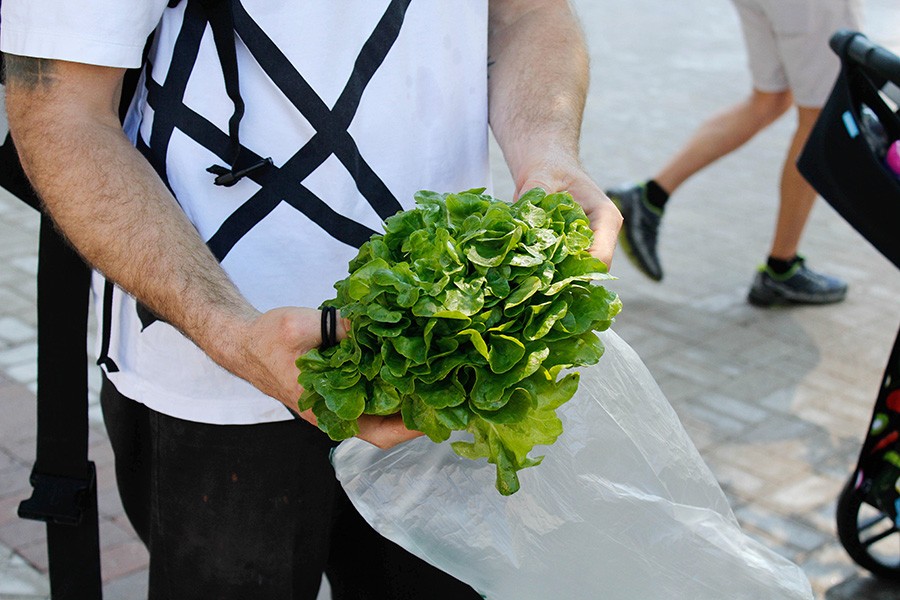 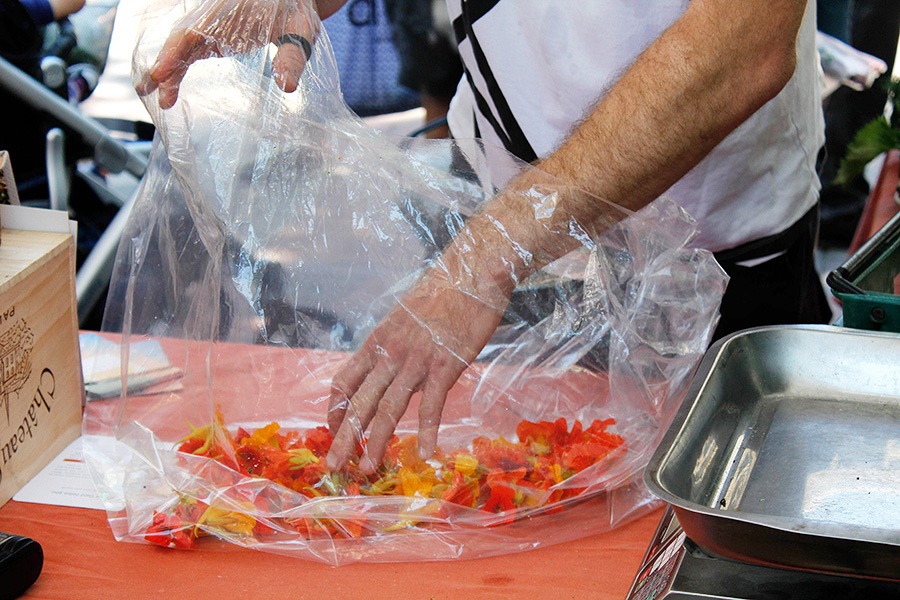 “These are like the first breaths of summer,” Crabb said.

He left the favas, because Asta cook and JT’s Herbs and Produce farmer Jade E. Taylor was bringing him some. He handed me a snap pea and I popped the whole thing into my mouth, at his suggestion. It was candy-like—crunchy, juicy, and sweet.

Later on, Crabb picked up a small, leafy broccoli crown, and suggested at home, simply slicing it lengthwise and searing the flat side. A new-to-me hardy green called callaloo, popular in the Caribbean, is typically chopped up, sautéed, and stewed in a tomato sauce, I learned.

Copley, now in its 40th year, is Greater Boston’s largest and busiest farmers’ market, with more than two dozen vendors serving between 3,000 and 5,000 shoppers each day it’s open throughout the season, says general manager Shane Clyburn. Official market literature is translated into four languages, besides English. The state-funded Healthy Incentives Program, accepted by every fresh produce purveyor at Copley, reimburses shoppers in the Supplemental Nutrition Assistance Program (SNAP) up to $40-$80.

When Crabb and I arrived right at the start at 11 a.m., some farm stands already had lines 15 people deep. Among them was Atlas Farm, a South Deerfield organic grower and Crabb’s preferred stop for dandelion greens and callaloo. The dandelion greens are a necessary component of a ricotta gnudi dish on the Asta menu, where the cheese’s “richness and fat really balances the bitterness of the greens.”

Crabb likes that the Copley market features several farms with high-quality produce, so he can compare like ingredients and buy the best of the bunch. But some less common ingredients are must-buys from certain farmers, such as Atlas’ hardy greens.

“Sometimes we’ll plan our whole day around the Atlas line,” Crabb told me, adding that he often enlists other cooks to help him divide and conquer the shopping trip. 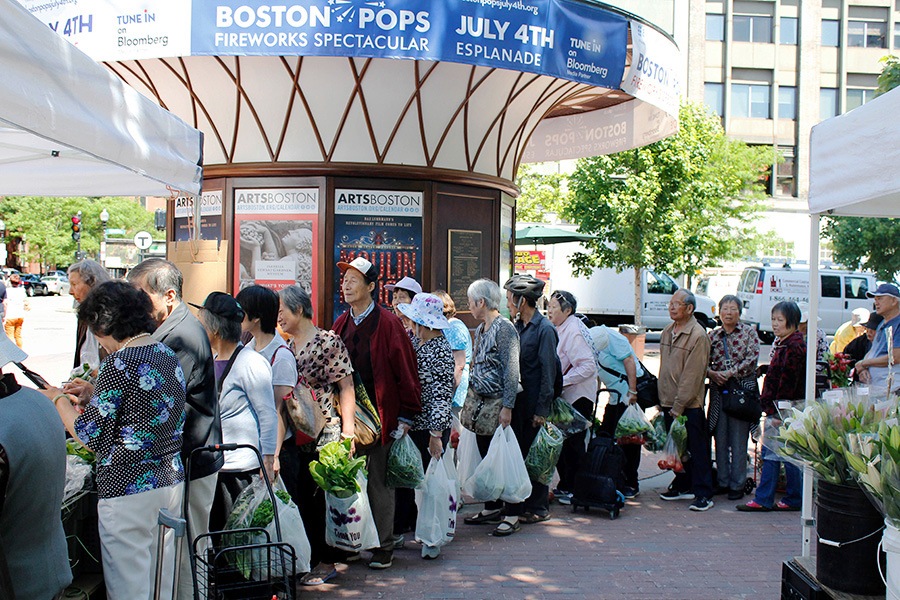 A line forms at Dick’s Market Garden early in the day. / Photos by Simone Migliori 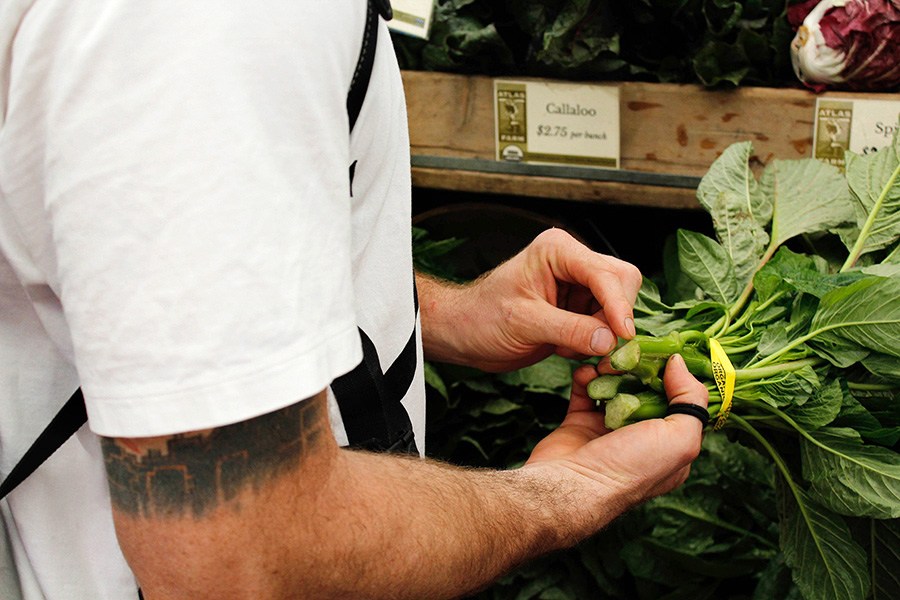 Crabb describes how to prepare callaloo. / Photos by Simone Migliori 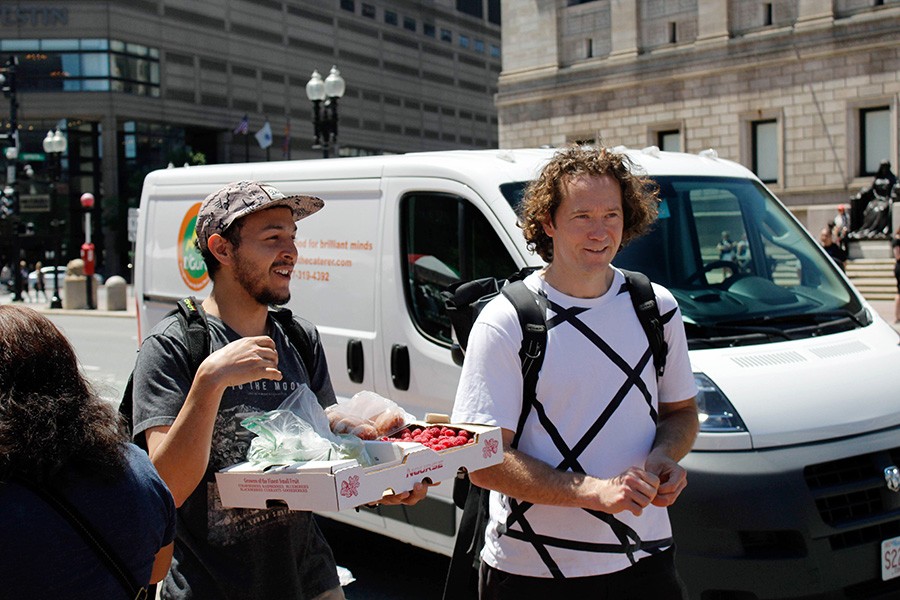 About 20 minutes into our shopping trip, Asta sous chef Yesid Areiza joined us. Crabb briefed him on what we had already secured—squash, snap peas, shiso leaves.

Areiza asked, “doughnuts this time?” Cider doughnuts from Hamilton Orchards is a Tuesday tradition at Asta, they told me. Crabb picked up a half dozen, along with a pint of early, though deliciously ripe raspberries.

Before we finished up about 20 more minutes of shopping, Crabb and Areiza have also purchased several heads of pretty young lettuces, a couple handfuls of green and yellow string beans, and all of the nasturtium flowers Siena Farms had. Crabb was tempted by early sunflowers—they’d look nice in a vase in the dining room, and he could pull from the edible petals to garnish dishes, he said. But he didn’t get them this time.

He did buy a pint of nearly overripe strawberries from Dick’s Market Garden, even though there was a flat back at Asta for the two strawberries dishes on the menu.

“These are so good we’re going to highlight them [tonight.] The other ones we have, we’ll freeze them and make jam later,” Crabb said.

That’s the thing about shopping a farmers’ market, or investing in a CSA share, he noted. It challenges the cook to figure out how to use everything in the haul—perhaps that means preserving, pickling, or freezing things. Shopping for produce this way also supports the local economy and the livelihood of real people.

Speaking of economy and livelihood, Asta’s Tuesday Copley market budget was spent just before noon. Crabb was pleased with all they bought for the money.

“This is kind of preachy, but if we don’t buy, it won’t be here. We all want it to be here. You have to support it,” he said. It may cost more than conventional produce in some cases, “but I think they’re making it very affordable for people,” Crabb said of the market directors and farmers themselves.

A bit ironically, though, just as Massachusetts farms really get going, many Bostonians are fleeing the city for summer vacation. Asta is among them: Crabb is traveling in July to pop up at restaurants in London and Madrid. The restaurant is open for a la carte Wine School happy hour and dinner on Friday, June 29, and for dinner on Saturday, June 30, but then it closes until dinner service on Friday, July 20—just in time for the really good stuff.

The Copley Square Farmers Market is every Friday and Tuesday through November 20, from 11 a.m.-6 p.m. 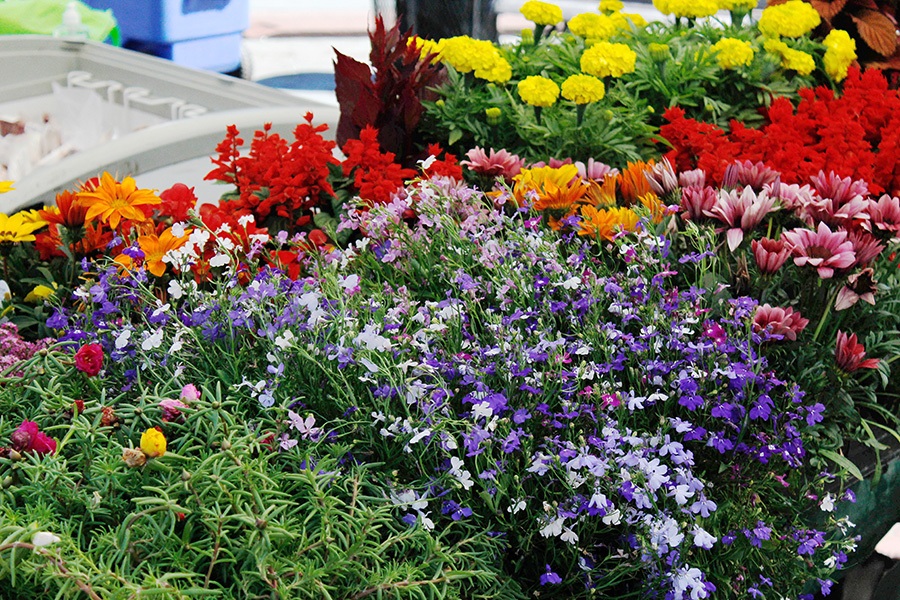 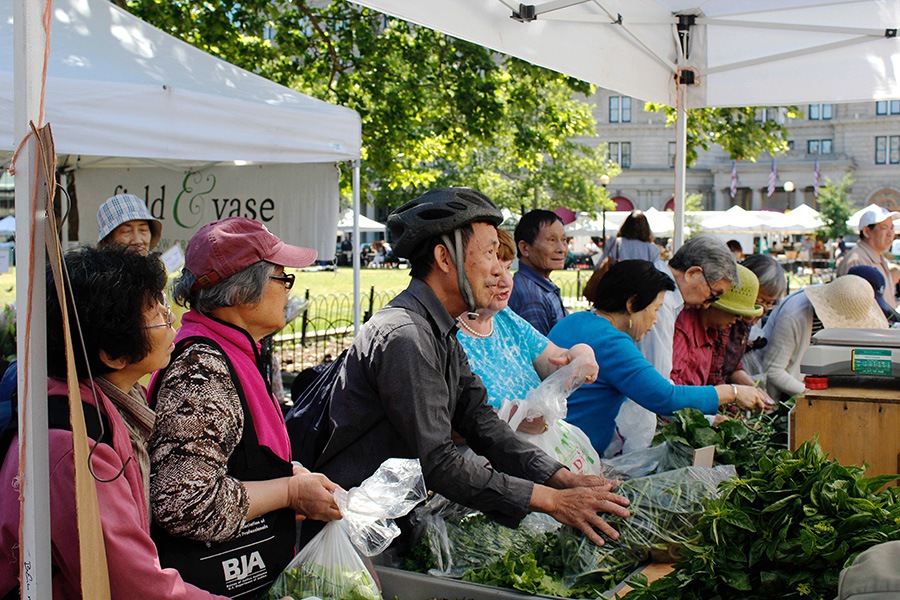 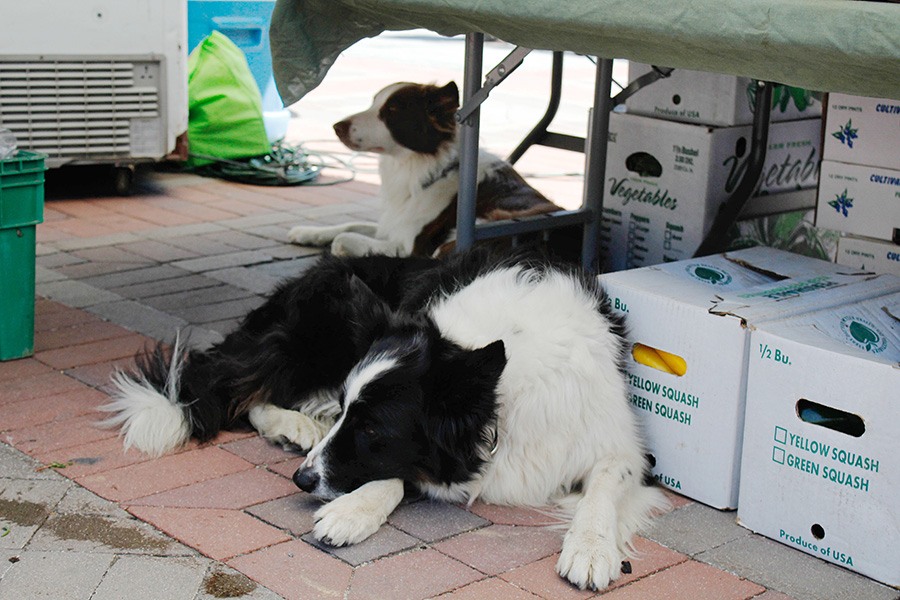