In a very particular order, our deputy food editor dishes on which fruits de mer benefit the most from a hot-oil bath. 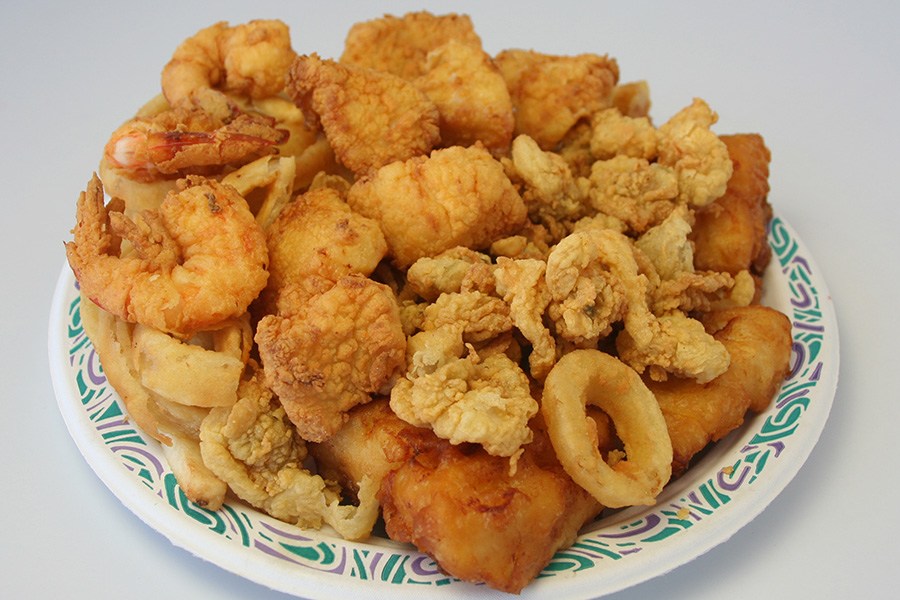 Summer is not necessarily seafood season in New England: Our shores teem year-round with various shellfish, white fish, and more tasty catch. But summertime is when many crave it most, myself included.

Nothing says summer in New England more than a teetering, disposable plate piled with crispy creatures and fries, lovingly slathered in tartar sauce. Some of my most enduring memories are of sunny-day drives up to Ipswich or down to Quincy for lunch at the Clam Box (a landmark in both towns, though they’re unrelated). Or waiting in line, in sandy sandals or maybe even barefoot, at a beachside snack shack.

But with copious creatures in the mighty Atlantic, it’s hard to pick a favorite—or is it? The battle over which seafood reigns supreme is fierce, but our opinions are strong. So here, inspired by New York Times food critic Pete Wells’ authoritative ranking of summer fruits, is the best fried seafood, in a very particular order. Let the arguments ensue—and please pass a napkin.

Last in the ranking, because honestly, there are better ways to eat scallops—sea or bay—than after frying them up. (And I’ll tell you now, fried oysters did not make the cut. Never better than oysters on the half-shell, fried oysters are acceptable in po’boys or in lettuce wraps, but please. Just try the oyster as Poseidon intended—briny and chilled.) Not that I would eschew fried scallops (or oysters) if they arrived on a fisherman’s platter, but to order just a pint or platter of scallops and fries leaves something to be desired. Perhaps the hot oil bath overcooks their succulent texture away, or a thick, cornmeal crunch masks their sweet flavor. I’d rather have my scallops gently pan-seared with a buttery wine reduction and a swish of tender risotto, thank you. 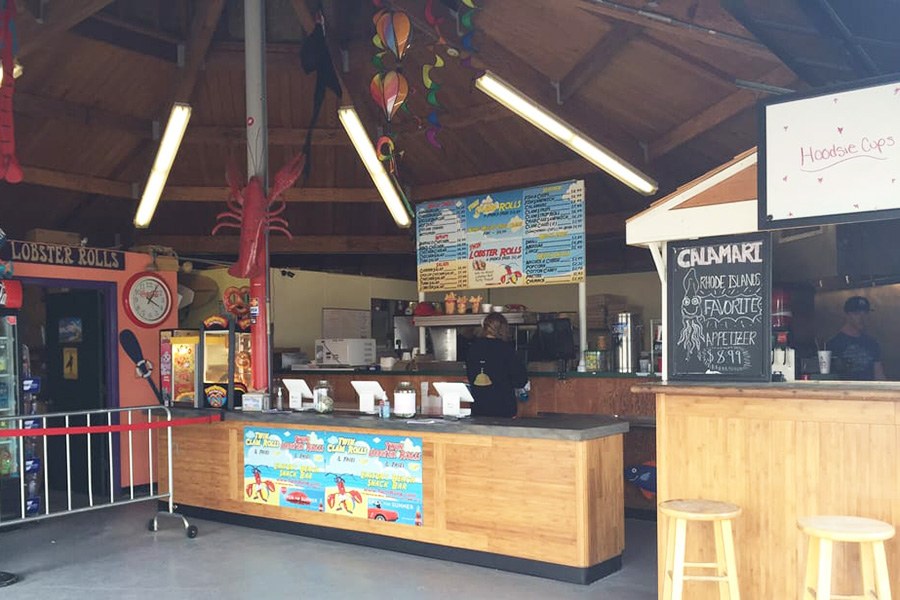 As the Easton’s Beach Snack Shack in Newport declares, fried calamari is Rhode Island’s favorite appetizer—even on the beach. / Photo by Katie W. on Yelp

This spicy, greasy, restaurant menu staple is not the first thing that comes to mind at a seafood shack, but many of them indeed offer crispy-fried squid swimming in garlicky butter and hot peppers. Particularly in L’il Rhody, which hauled in nearly $30 million of squid in 2016, piquant, cornmeal-battered rings and tentacles come by the cardboard pint. It’s a thing at some Mass. shacks as well. But if the calamari is simply fried and not tossed with cherry or banana peppers in the Italian-American tradition, it’s subpar and not worth ordering from a roadside shack—especially when there are whole-belly clams to fry. Squid lovers, note: The season runs spring into the fall, so keep that in mind next time you lament ordering what turns out to be bland, chewy calamari in early March. 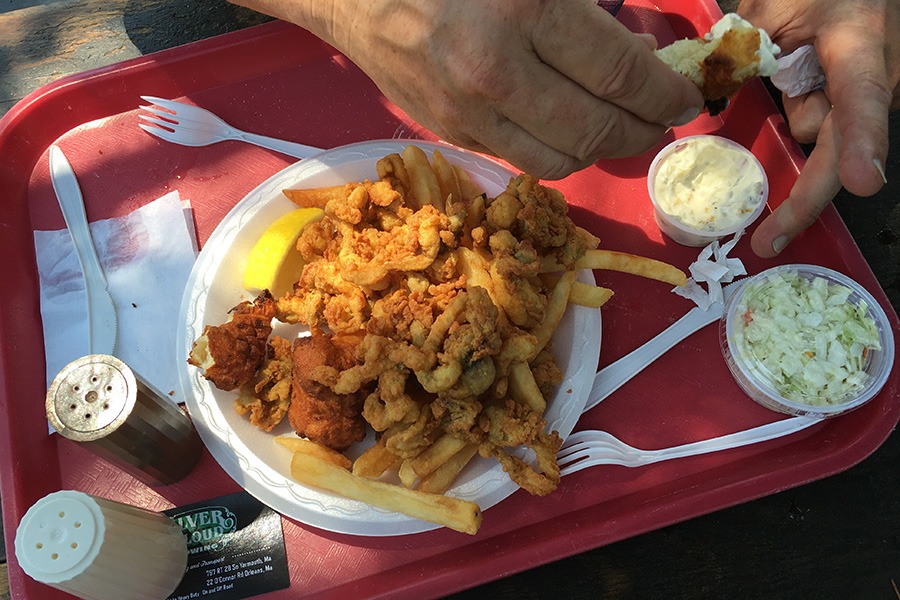 The author’s father digs into tartar sauce with a clam cake at Captain Frosty’s. / Photo by Jacqueline Cain

If fried clams are to New England what barbecue is to the South, as James Beard award-winning food writer and Swansea native David Leite once wrote in the New York Times, clam cakes (aka clam fritters) are our hush puppies. Firm but pillowy, deep-fried balls—they’re doughnuts, really—stuffed with bites of chopped quahog, they’re commonly served as a side on seafood platters in Rhode Island, Connecticut, Massachusetts, and sometimes in Maine, but are also sold some places by the pint. As my father has taught me (and demonstrates, above, at Captain Frosty’s in Dennis), these salty, slightly sweet morsels are a proper vessel for funneling more tartar sauce into the gullet (tartar sauce is a key accompaniment to most fried seafood)—and I would certainly not judge anybody for trying the same with a steaming cup of chowder. 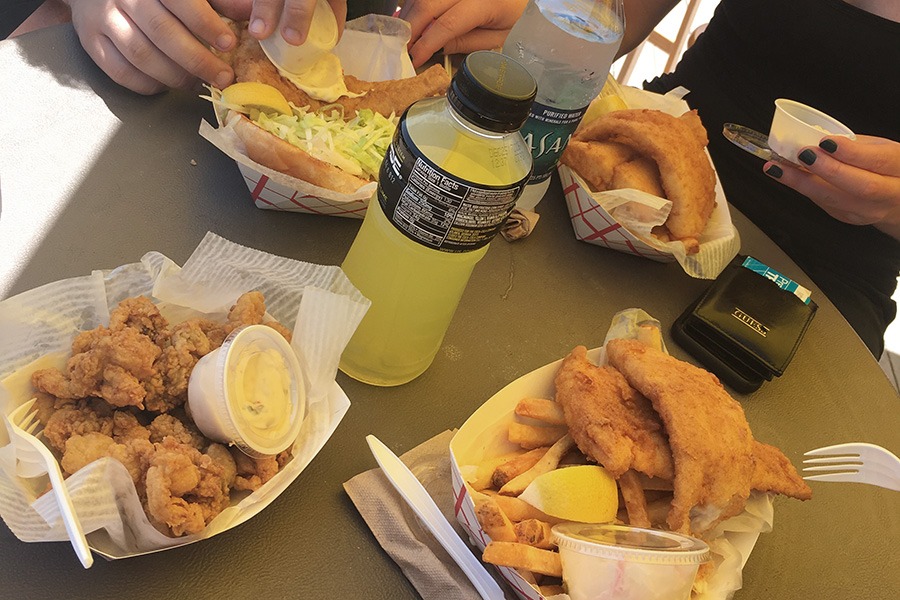 While I went with whole-belly fried clams, three friends were pleased with fried fish and chips at Easton’s Beach Snack Shack in Rhode Island. / Photo by Jacqueline Cain

We have our European cousins to thank for this year-round staple: Flaky white fish beer-battered (preferably) and served atop a pile of French fries is actually an early example of culinary fusion from the Brits and the Belgians. There’s a reason fish and chips is such a beloved staple on both sides of the Atlantic—surely you’re familiar with the Sacred Cod hanging in the State House (or, you know, Cape Cod). But our devotion to this fish is holding us back. As seafood impresario Jared Auerbach of Red’s Best explains, New England fishermen pull in a range of suitable fried fish fillet options, and historic devotion to cod—or even haddock, hake, or pollock—has us missing out on such flavorful options as redfish, skate, blackback flounder, dogfish, and more. The humble dogfish, in fact, is the current best option, with local fisherman drawing in 80,000 pounds per day. It’s equally tasty and more firm than cod, and has the added benefit of being a much more sustainable product for local fishermen. “What helps the fishermen the most is flexible consumption,” Auerbach says. 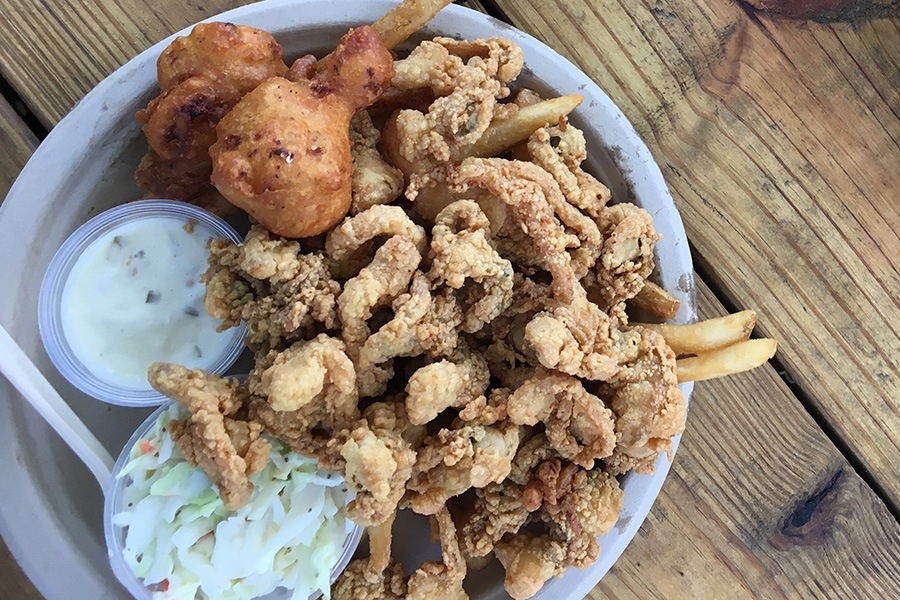 There is no local, summer dining tradition more iconic than digging into a grease-stained, cardboard pint of crispy fried clams at a picnic table, preferably a seaside one. From Bob’s Clam Hut in Kittery, Maine, to North Shore destinations like J.T. Farnham’s and Woodman’s of Essex, out to Mac’s Shack on the tip of Cape Cod, down to Newport, R.I.—these plump beauties are almost always my order at any New England seafood shack. Outside these parts (and on menus here, for the belly-averse), Atlantic clams are sliced and fried up as “strips,” crusty slivers of batter that resemble onion strings, maybe, or the dregs of that carton of French fries. Anything but the plump, sweet, succulent soft-shells they were born in our icy waters to be. Proper cleaning is a must—we want to crunch on cornmeal or flour crust, not on sand, thanks—but anybody who calls themselves a New Englander needs to get over bellyphobia and order fried clams whole.

15 Lobster Dishes Every Bostonian Must Eat »