Ahead of this weekend's second anniversary, CEO Matt Malloy reflects. 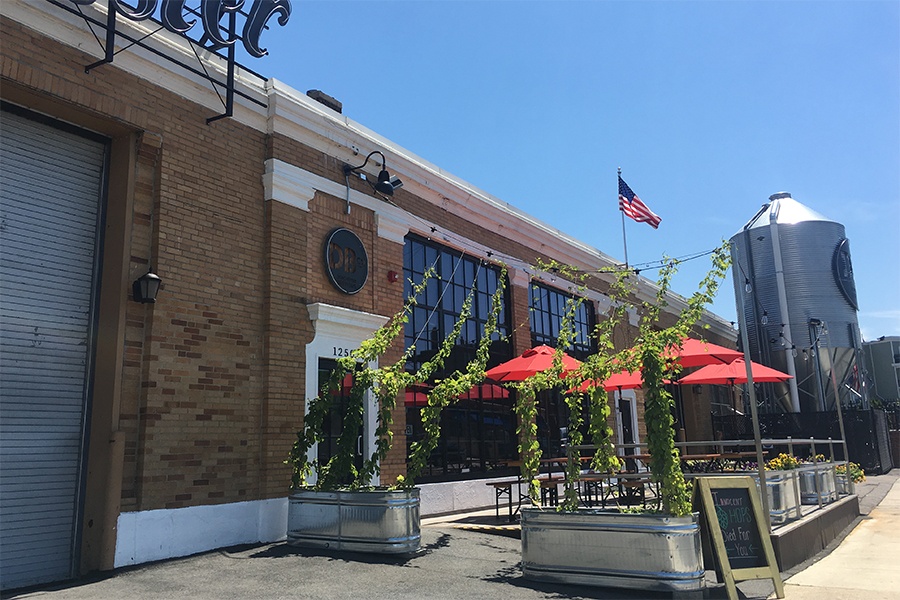 A few years ago, Matt Malloy was really starting to get annoyed that he had to travel to Cambridge or Somerville in order to try the newest, locally brewed beer. So along with a handful of business partners, including head brewer Todd Charbonneau, Malloy opened the brewery he wanted to see on his side of the river: Dorchester Brewing Company.

Two years into the endeavor, DBCo. is maxed out production-wise, making not only Dorchester originals like Embarrassment of Riches hoppy ale, but also a range of brands for partner breweries like Evil Twin, Stillwater Artisanal, and Backlash Beer Co. The Dorchester-based owners have also started the process of adding a kitchen and a beer hall-style addition on the roof, the CEO says.

DBCo. celebrates its second anniversary this weekend with a party featuring an appearance by Keytar Bear. Ahead of that extravaganza, we caught up with Malloy about filling a niche in the craft beer industry—and in the wider Dorchester community. 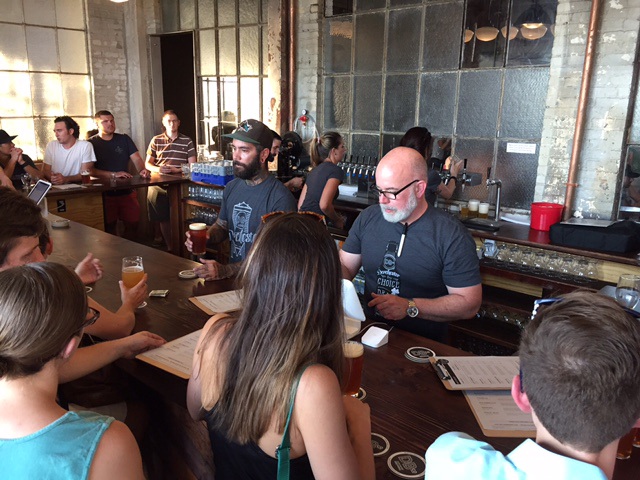 Malloy, who also just celebrated his 50th birthday, honed his business chops at ZipCar. He brings a sharing economy mindset to the beer industry.

“There is a market for brands that are growing, and need that extra capacity to continue to expand their brand,” Malloy explains.

But not every brewery can afford, or wants to invest in all the tools that help achieve the quality control and volume required to grow, Malloy says. DBCo., on the other hand, set out to build a state-of-the-art facility to share with the wider beer industry. Most recently, it invested hundreds of thousands of dollars in amenities like centrifuge technology to filter beers, a state-of-the-art German-made Krones canning line, and a digital can seam-checking system. 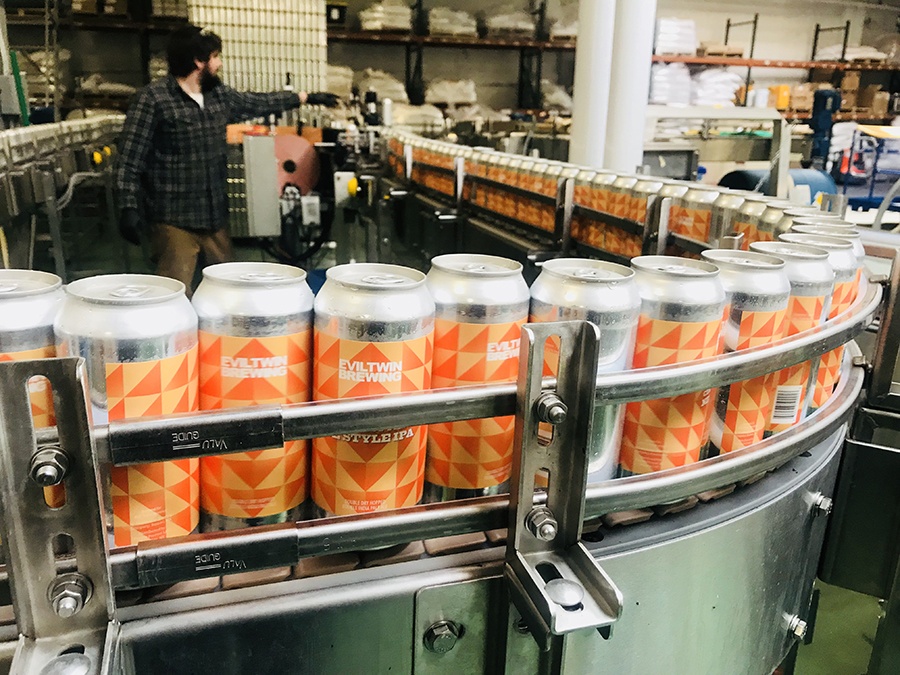 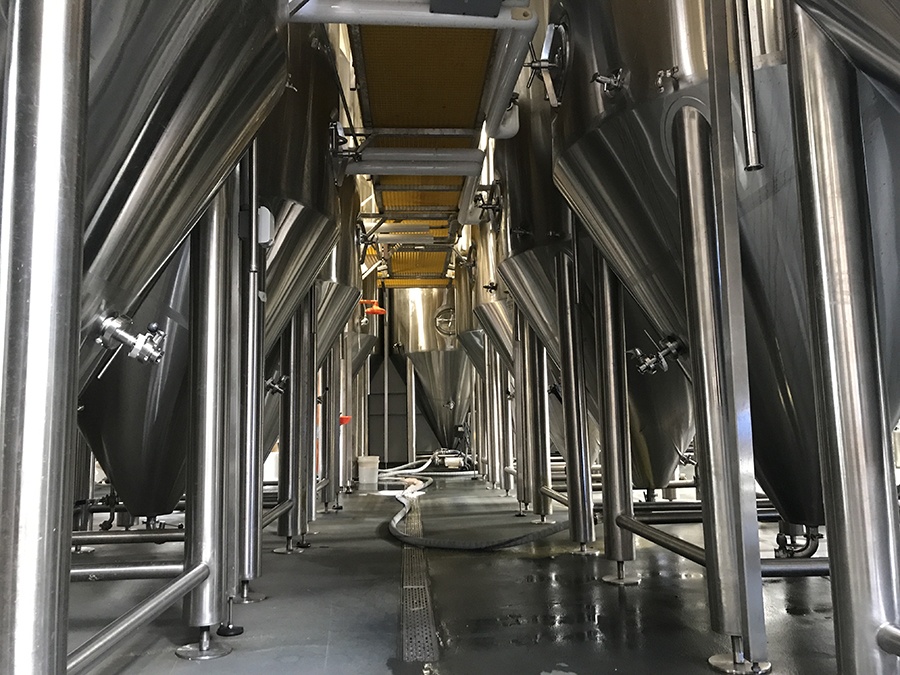 Some of the 19 stainless steel fermenting tanks filling up the production floor at Dorchester Brewing Co. / Photo provided

Dorchester’s partners develop their own recipes, but then they give control over recipe management to the DBCo. team, Malloy explains. While all 10 of the partnerships ebb and flow, DBCo. is typically making 120-180 barrels for a given brewery every month. “We ensure consistent quality on a regular basis,” Malloy says. “We are the last people to touch the beer before it hits the market in some cases. So, we care a lot.”

Since Day One, Dorchester has had one brewing system for its own house brands and pilot batches, and one brewhouse especially for making partner brands. Over the past couple years, it has installed nearly 20, 60-barrel fermenting tanks, and is now producing at capacity of about 30,000 barrels of beer annually, including some coveted cans cracked all over the world.

On a recent trip to Barcelona, Malloy visited the city’s top bottle shop, and immediately noticed a Dorchester-brewed can of Evil Twin and Omnipollo’s collaboration Pink Lemonade IPA. Malloy picked up the can and showed the proprietor the “made in Dorchester” label, and pointed to his own T-shirt (of course he was wearing a DBCo. shirt on vacation). The moment lead to a connection with a Spanish brewer, who invited Malloy to see his own brewery and was a very memorable night, he says.

It wasn’t that long ago, though, that many beer fans looked down on partner or contract-brewing relationships. But people are staring to realize that not every brewer needs to invest millions into their own facility just to say, “I make my own beer,” Malloy says. “All the brewers have 100 percent creative control of what’s happening; we are the executers. The people who realize how this works [can see] this is the better model.”

Previously, a brewer either had his or her own facility where it made everything, or they contract-brewed all of their products. “Now we are enabling this model that allows them to flex and really react in a much smarter way with the market,” Malloy says.

Winter Hill Brewing, for example, makes and sells most of its beer on-site at its Somerville brewpub, but brews and packages a flagship IPA at Dorchester for retail sales. Barrel House Z makes beer for aging at its Weymouth facility, but has Dorchester brew and package its “In the Buff” un-aged varieties. Backlash Beer Co. has started production at its soon-to-open facility in nearby Newmarket area of Roxbury, but is still supplementing it with beer made at Dorchester.

“Now we are enabling this model that allows them to flex and really react in a much smarter way with the market,” Malloy says.

At the same time, DBCo. has realized its CEO’s initial vision: A welcoming place for the people of Dorchester, South Boston, Roxbury, and beyond to meet friends for a beer. And no, Malloy does not believe there are too many breweries popping up around the city and region.

“I don’t see the bubble happening. What is happening, though, is the re-regionalization of beer. More taprooms are opening. You have to be innovating on a regular basis. People are looking for innovation, they’re looking for quality, looking for variety, and looking for the next greatest thing.” There is potential to find that at Dorchester, which typically has at least half of its 20 tap lines dedicated to partner brands.

And over the course of two years, Malloy has also learned that guests also want a casual place to have dinner.

DBCo. has always offered light snacks and hosted food pop-ups, but the latest plans call for a local entrepreneur to execute a consistent menu from an on-site kitchen being built out in what’s currently a storage garage. A year-round beer hall and two open-air decks will also be added to the roof, pending zoning approval, Malloy says. DBCo. is in talks with bringing on an established, local business, as a way to help them grow and also provide food for DBco. patrons, but Malloy isn’t ready to say which one just yet.

The restaurant could open as early as late spring 2019. It will be casual, with counter service and a seat-yourself system, and food to complement the beer.

Celebrate two years of Dorchester Brewing Co. all day this Saturday, July 21, with a fresh Belgian wit beer release, Union Square Donuts and Oath Craft Pizza, live music including one of the few summer performances by Keytar Bear, and more. 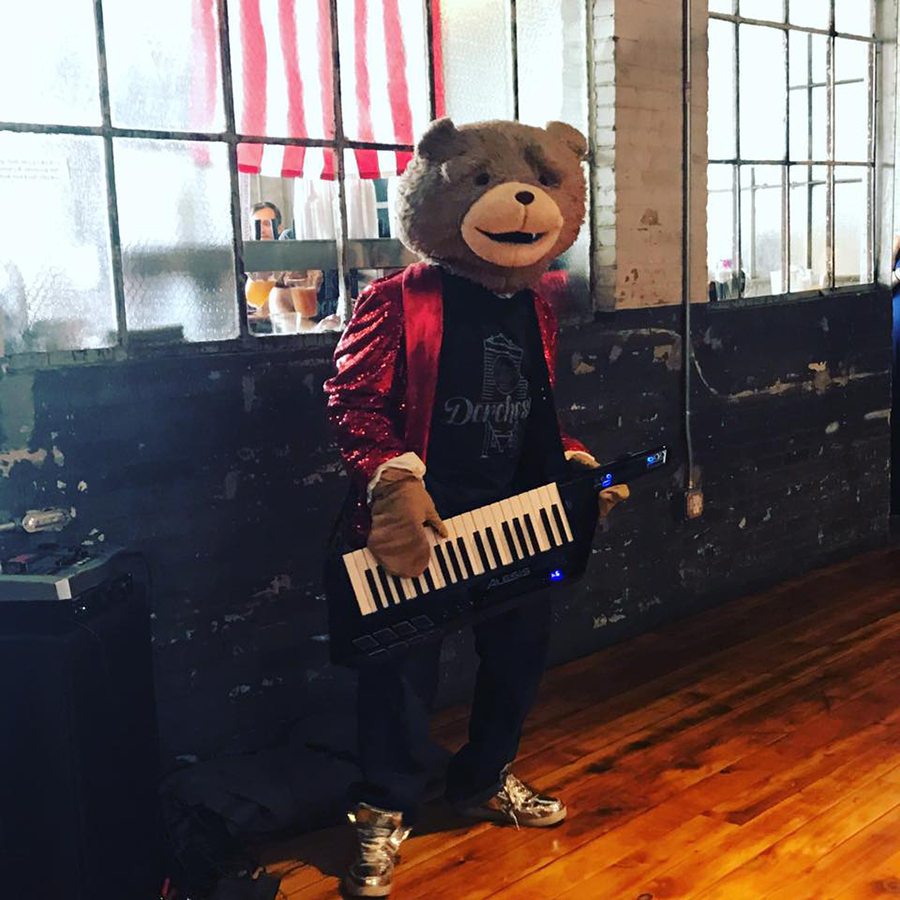 Keytar Bear rocking out at a past DBCo. party. The busker returns to the taproom Saturday, July 21, for DBCo.’s second anniversary. / Photo provided