Restaurant Review: The Table at Season to Taste

Reports of the tasting menu's death may be greatly exaggerated. 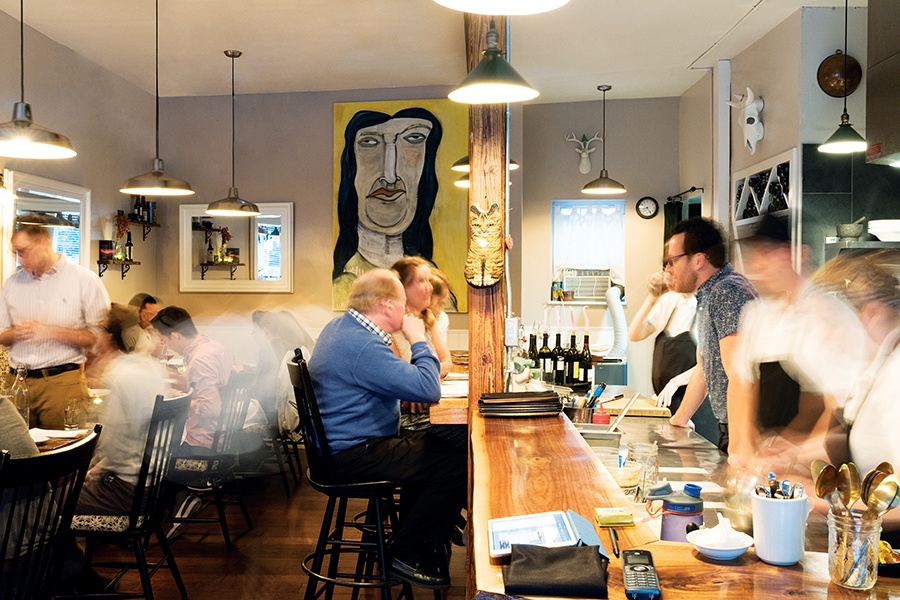 The tasting menu is over! the foodie-pundit class has grown fond of trumpeting, and every few hot takes or so I’m inclined to agree. The small-plates revolution really did a number on the vaunted chef’s-whim format, stealing its best gimmick—a dizzying barrage of dishes instead of your usual one or two—and worse, getting us hooked on calling all the shots at mealtime with Netflix-style ease. Meanwhile, the rise of upscale-casual dining has sapped our patience for the sort of plating esoterica that typifies the genre—i.e., fussy abstract swoosh-scapes you need a hundred words and a grasp of particle physics to explain.

But every now and then I find myself in a multicourse situation (two recents: Blanca in Brooklyn; Pujol in Mexico City) that makes me think there’s life in the old codger yet. That even formalist opera, in the right hands, can vibe with today’s rock ’n’ roll. My latest: the Table at Season to Taste, Carl Dooley’s cumbersomely named 20-seat stunner in deepest North Cambridge. Don’t let the scruffy open-kitchen storefront fool you. There’s nothing dashed-off about the precision-tuned food by the Top Chef season 13 alum, who spent a few years as Tony Maws’s number two at Craigie on Main. Marshaling meticulous technique, sure-handed riffs on dishes you’ve heard of, and a keen sense of the flavors and flow of modern dining, Dooley has been quietly infusing the chef’s-tasting genre with free-verse energy and relevance since the place opened in 2016.

Don’t worry: Dooley sees the control-freak gleam in your eyes. He’ll let you steer a bit, or at least pitch in. A fixed price of $98 gets you four official courses—three savory, one sweet—each with two choices. But that doesn’t mean there won’t be surprises along the way.

Dooley’s nimble sequencing makes you think about meal pacing the way a Hitchcock film makes you ponder camera angle. A typical meal might begin with raw oysters, the chilly brininess matched and elevated by the pungent tang of fermented pineapple hot sauce. It snaps you to attention, away from your phone. Next, a duo of golden samosas filled with local spring-dug parsnips—licorice-tinged and extra-sugary from a winter spent underground—pulled hot out of the fryer, with pickled-cauliflower yogurt for dragging them through. Bites, in other words, that you totally would have zeroed in on staring down a modern small-plates menu. And right about here is when it dawns on you that you haven’t even gotten to the part of the meal you ordered. The night is young. 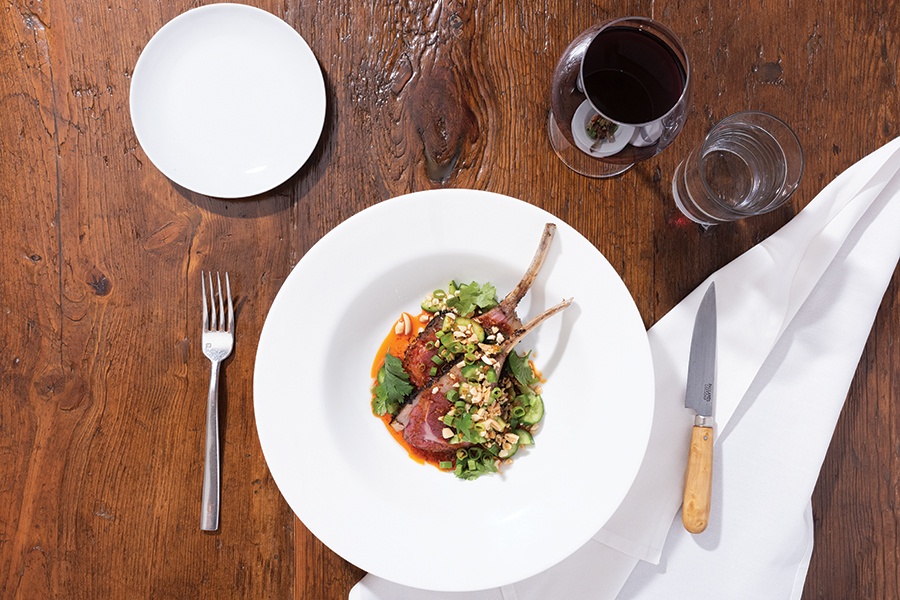 Then the real show begins: sashimi of pale-pink hiramasa that keeps the almond–muscat grape sweetness at bay with white soy and mint. Or maybe you chose rillettes of tender rabbit-leg confit, studded with foie gras. (The foie gras showed up at another meal as a mousse that was as creamy and unctuous as a slab of Baskin-Robbins Jamoca fudge cake.) Next, a smoldering squid-ink campanelle tangled with sweet crab meat, green garlic, and crispy quinoa.

Or maybe: a smattering of dreamy salt-cod ravioli that sears your skin as it blows your mind. The plump-cheeked pillows are set in a pool of buttery artichokes barigoule, but the first thing you notice is the heat. Everything—the pasta, the sauce, the pottery bowl it rode in on—is freakishly hot. Like the electrified metal edges in the board game Operation, the aggressive temperature forces a slow and steady hand, imposing a timeline, of sorts, on your experience of the dish.

Which goes down like this: A bowl hits the table huffing menacing steam, but one nub of artichoke perched on the top looks safe enough. It is swollen with lemon intensity. Too lemony? A cautious half-nip of the sauce: so bright it’s almost strident. Then suddenly. A dam breaks, disgorging a luscious sea sludge of intensely musky saltfish brandade, and soon all those screeching high notes morph into a soothing chaser you can’t spoon up fast enough. There are chefs out there who deploy every spell in the molecular-gastro playbook to ply the dazzlement Dooley musters with only an oven, a good potholder, and a bushel of Meyer lemons. It’s pretty extraordinary.

After course two, you might start panicking you’re nearly carbed out. Not to worry. In a merciful touch that also feels modern, the last savory course veers in a paleo direction. A pair of blushing-pink lamb chops crusted in black garlic amped up with numbing-hot Sichuan oil, toasted peanuts, and bracing cucumber salad. Or charred-edged octopus cooked confit-style and served nestled in stewy garbanzos laced with preserved lemon, turmeric, and sneakily fiery mustard oil. Dessert comes, and you breathe a sigh of relief it’s not some tortured tableau of swooshes and frippery but rather homey comfort: caramelly butterscotch pudding with cookie crumble, perhaps, or coconut layer cake with palate-cleansing mango sorbet. 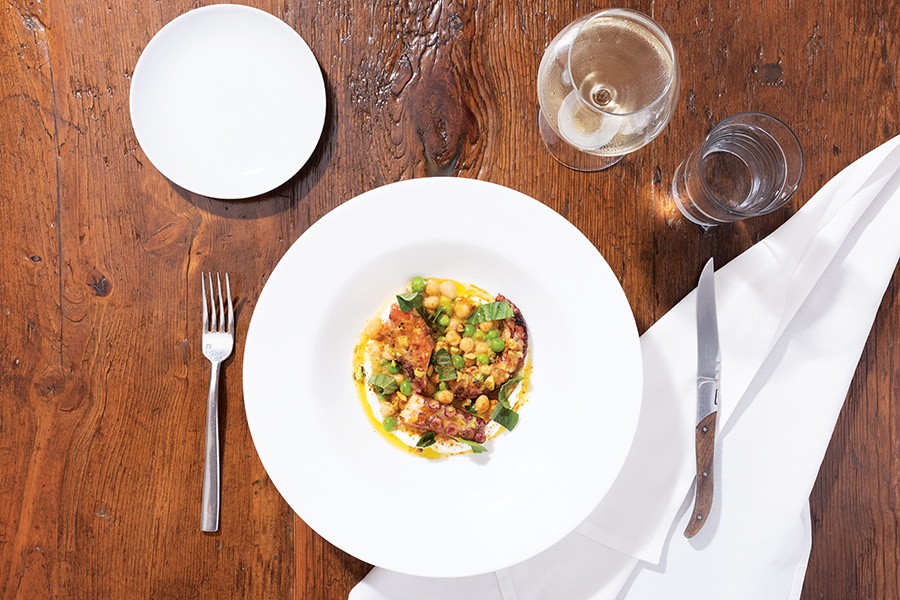 In truth, the place isn’t perfect. My second meal was shakier than normal…but shaky like a wobbly dress rehearsal for a Tony-winning show. One dish, glazed asparagus paired with green chorizo, tasted disjointed and harsh. (Turns out it was day three of a menu reboot. By the time I caught the show again weeks later, the aria soared.) There was a curry of hake and shrimp-and-pork sausage so unobtrusive you could have served it at a wedding. In a matter of days, Dooley had workshopped it and adapted it as a new dish.

There are distinct pluses to serving only 20 diners at a time. For starters, every guest gets to interact with the first-string team. It was often Mary Edinger herself, the restaurant’s rising-superstar baker and pastry chef, who brought over the cake pan of garlic-butter-slathered clover rolls she proofed earlier. Dooley’s preferred palette of flavors—Indian spice and Sichuan heat and bursts of pungent funk—can’t be a pairing cakewalk, but sommelier Jesse Eslin manages the inherent hurdles with aplomb as well as outsize holdings of luscious chenin blancs. The one-on-one with the principals goes a long way toward making a meal at the Table at Season to Taste feel less like a dinner out than a dinner party at someone’s home—someone who gets the way we eat today, even if their homey kitchen isn’t cranking out a whirlwind of small plates on demand.

As for those who claim the tasting menu is dead: I’ll concede the general point. With an exception for the chef who’s killing it every damn night.