Look on the sunny side and dig into the best breakfast sandwiches in Boston.

Breakfast sandwiches are the go-anywhere star of the morning, whether you’re pit-stopping quickly on your commute, or hiding under the covers nursing a hangover. We cracked a few eggs to find some of the best stacks around, including protein-packed classics and vegetarian versions. So rise and shine and get ready to chow down, because the first meal of the day can also be the most delicious. 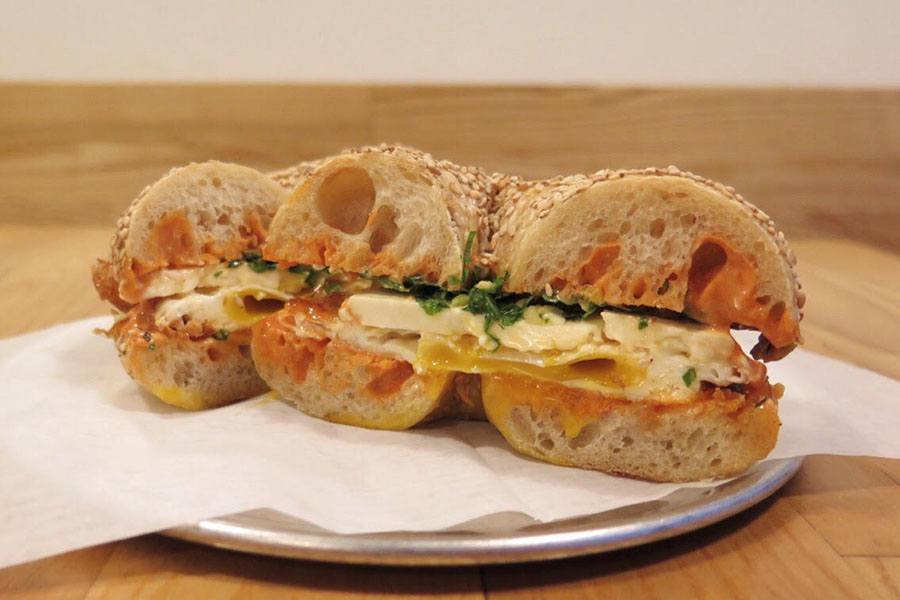 Boston’s got a corner on the bagel market now, and it’s thanks in no small part to this Porter Square bakeshop. With flavors ranging from cinnamon raisin to cheddar garlic, Bagelsaurus is sure to cure your cravings for chewy-on-the-inside, crackly-on-the-outside bagels. And the house breakfast sandwiches do not disappoint: A swipe of mustard butter elevates a classic egg-and-cheese, and the Hot Smoked take on cream cheese-and-lox features pickled red cabbage and fresh dill. But the crown jewel is the Eggspañola, with a slightly runny egg, feta, pimentón aioli, and parsley gremolata. On Tuesdays and Wednesdays, try the house combos on a gourmet English muffin from the in-house pop-up Vinal Bakery. 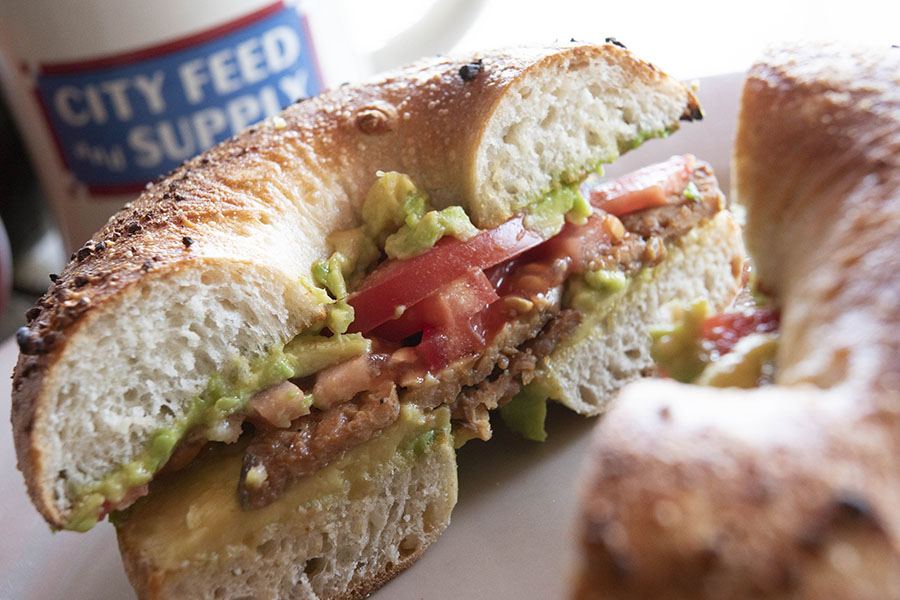 For an early-morning post-yoga treat, duck into the Centre Street outpost of this Jamaica Plain grocery store—which is always working to “craft delicious combinations that feed the heart, soul, and gut in equal portions,” according to cofounder David Warner. Omnivores have options, but don’t miss the best-selling vegetarian sausage, egg, and cheese combo; or even the vegan-friendly version with smoky tempeh strips, avocado, and tomato sandwiched between an Iggy’s bagel. Wander through the maze of natural foods until you arrive at the draft kombucha to wash it all down. 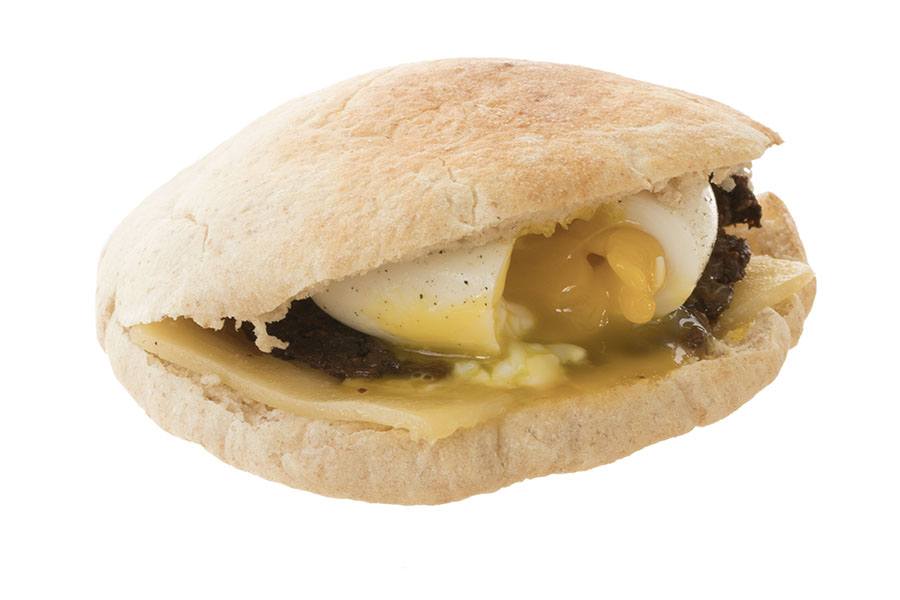 A decade after hitting the Boston streets, Clover has stayed true to its mission of converting meat lovers to veggie lovers. This year it took it a step further, hoping to lure the masses away from Dunk’s with the Impossible breakfast sandwich, for which plant-based, lab-derived Impossible meat is blended in-house with brown sugar and spices to closely replicate a sausage patty. Plant meat not your thing? Stick to the signature tomato-cheddar breakfast sandwich, served on Clover’s fluffy house-made pita. 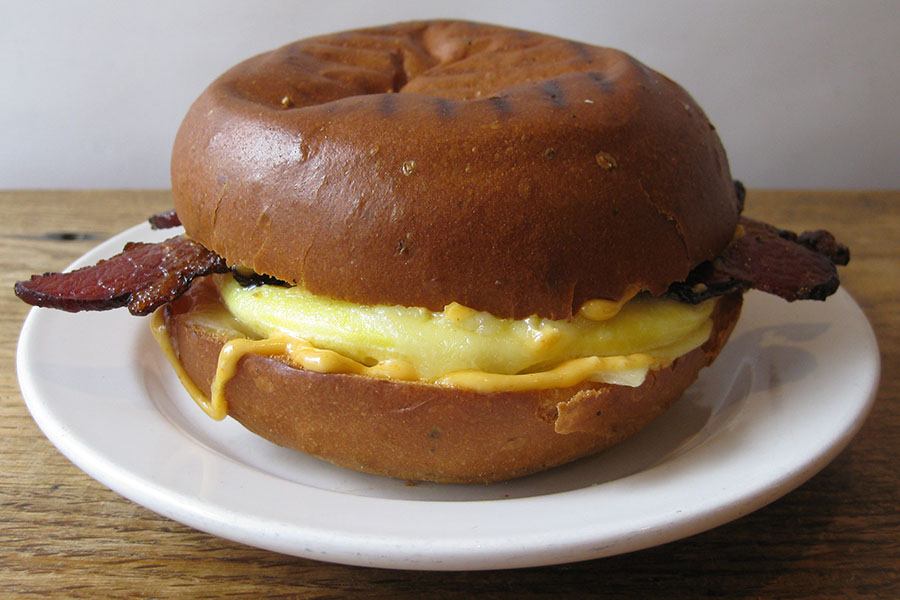 Known for superlative sandwiches, Cutty’s penchant for top-notch breakfast should come as no surprise. And yet, according to owner Charles Kelsey, “Our breakfast menu is the unsung hero of our shop—so many great sleeper hits on this menu.” It’s true: The shop boasts a wide range of options, from the basic egg sandwich to a Thai version featuring a complexly herbaceous sausage made in-house. For condiment connoisseurs, truffle ketchup, spicy mayo, and espresso-spiked red-eye mayo are all on the table. 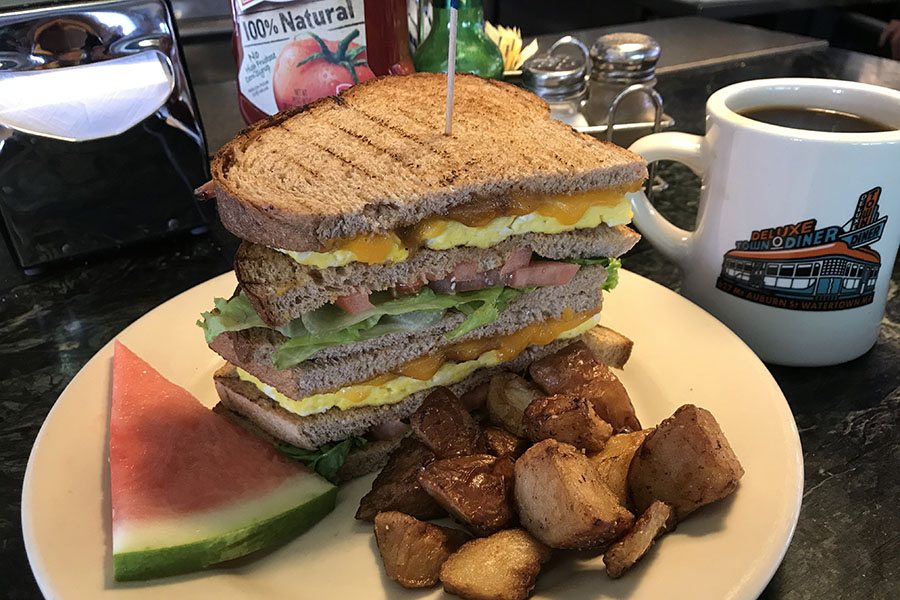 This railcar-style diner, which has been a Watertown institution since the 1940s, is a place with a history as rich as its sour-cream flapjacks. Wife-and-husband team Daryl and Don Levy took it over in the early 2000s and brought it back to its roots, installing the original marble counter found in the basement, and tearing down wall paneling to let the original tiling shine. The one thing they did modernize, however, was the menu, with additions including a formidable roster of breakfast sandwiches such as the smoked salmon egg sandwich, the triple-decker Breakfast Club, and the aptly named B.E.S.T. (a panini with bacon, eggs, spinach, tomato, and cheese on rosemary garlic bread). And don’t worry, you can sleep in—breakfast is served all day (one of the core tenets of Dinerism). 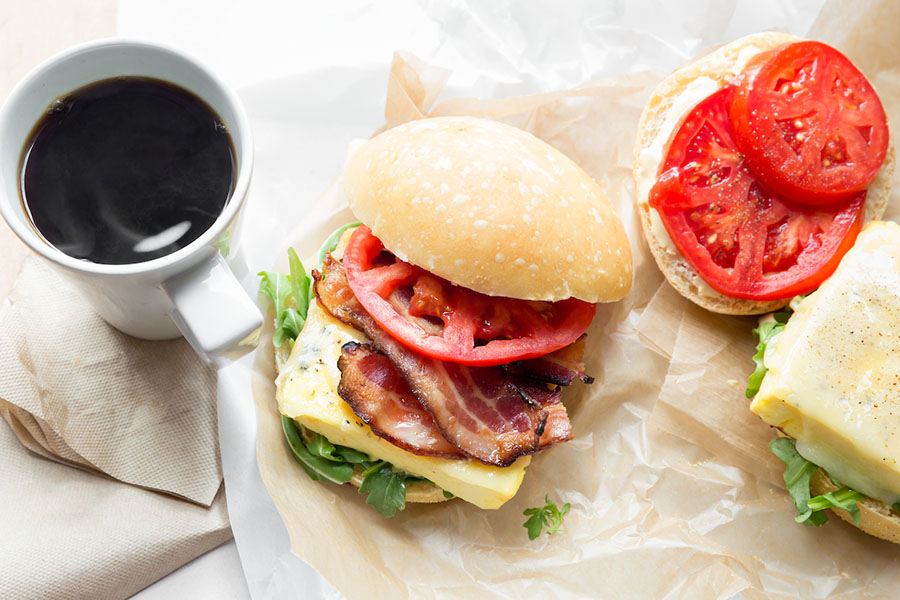 With an eighth location landing soon for the Seaport, this Boston institution by James Beard Award-winning baker Joanne Chang shows no signs of slowing down. But while Flour is famous for satisfying your sweet tooth with cult-followed sticky buns and Boston cream pies, the savory side is worth exploring, too: The breakfast egg sandwich is a best-seller piled high with an impossibly light and fluffy egg soufflé, cheddar, arugula, tomato, and Dijonaise. 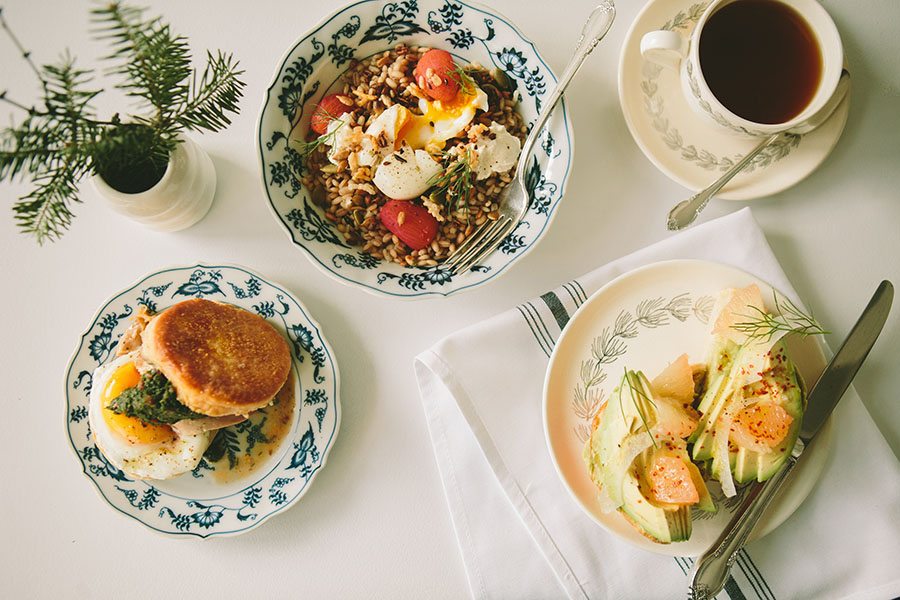 Don’t expect the standard meat-egg-cheese approach from Juliet—after all, this cheery Somerville café and restaurant is hardly known for staying in one lane. The rotating prix-fixe dinner menu and focus on in-season ingredients bring inspiration to the breakfast menu, too: “We’re presenting some really technical and delicious recipes, that are normally just for dinner, and offering them in an accessible and casual way,” chef-owner Josh Lewin says of their breakfast sandwiches. Take the current creation: an over-easy egg on anadama bread with whipped burrata, lobster roe, and dried-chili butter. Even the occasionally available “original” egg sandwich is unique, featuring chicken-and-lemon terrine and a condiment made from spiced Swiss chard. 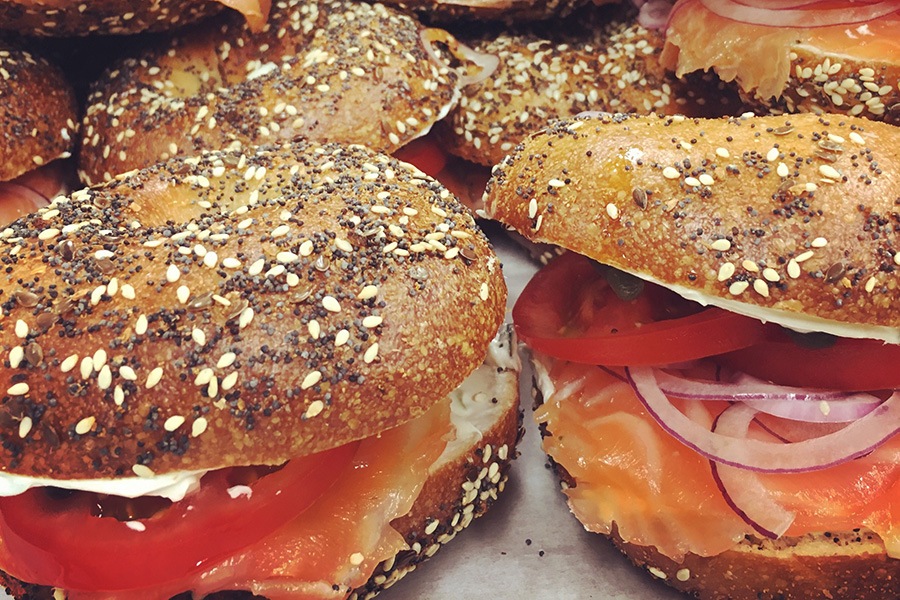 Mamaleh’s embraces the Jewish diner aesthetic down to the counter stools and retro (and excellent) soda fountain-bar, shaking up egg creams and milkshakes alongside creative cocktails. While the pastrami on marble rye draws raves come dinnertime, this Bon Appetit-noted establishment brings its A-game when it comes to its bagels—perhaps best enjoyed in the form of sandwiches piled high with lox, whipped dill cream cheese, tomato, red onion, and capers. 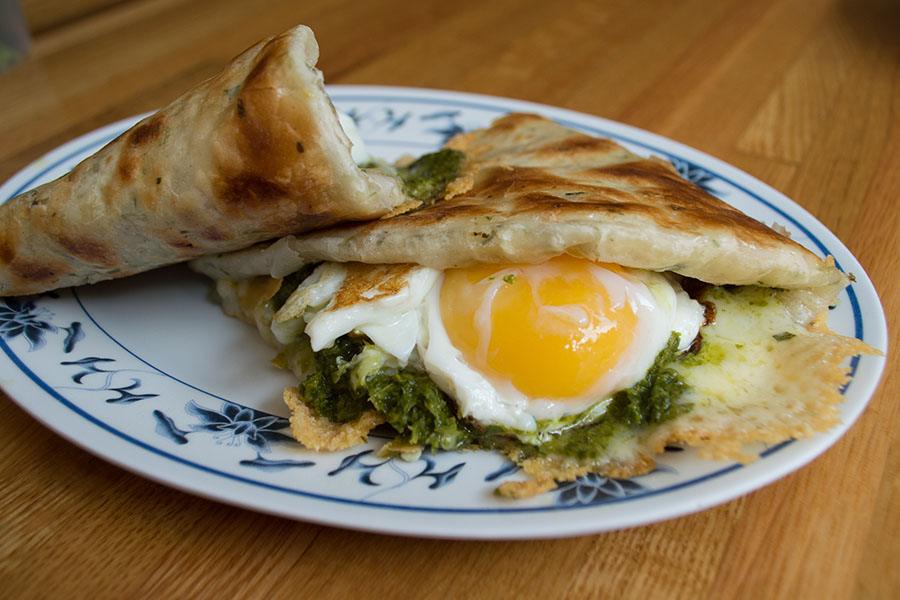 With two “oozy eggs,” Vermont cheddar, and pesto made with local greens tucked into a gigantic scallion pancake, Mei Mei’s Double Awesome is one of the few entries on this list where a knife and fork may come in handy. This food-truck-turned-restaurant has been serving up Chinese-American fare with an emphasis on locally sourced ingredients since 2012. Mei Mei recently underwent some changes, (mostly) hanging up the keys to their food truck and forgoing table service in favor of all-day counter service in Audubon Circle. With those changes came more sandwich options, but the iconic Double Awesome still sells like (scallion) hotcakes. 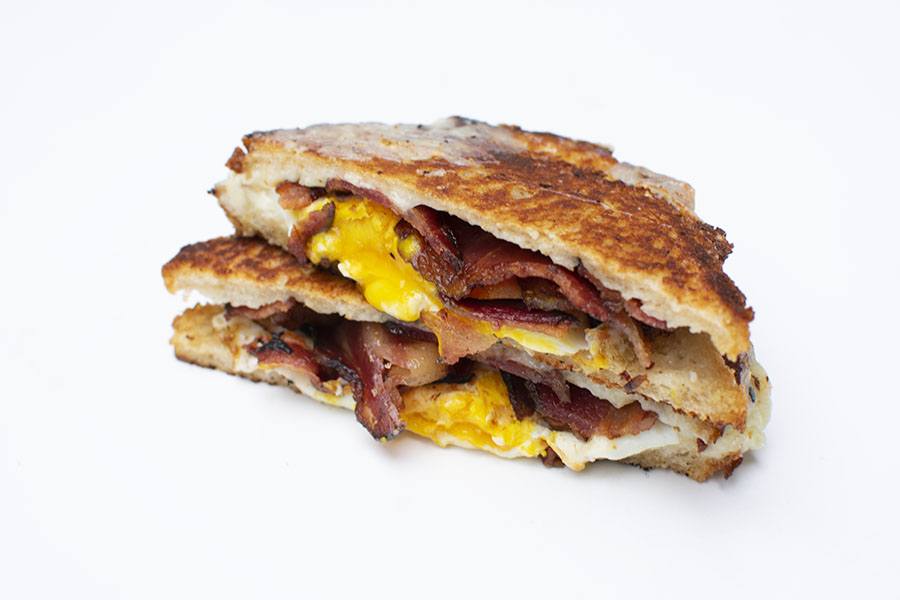 This tiny eatery cures hangovers on the spot with an extensive sandwich selection, homemade English muffins, and all-around good vibes. Head to Bay Village for a classic bacon, egg, and cheese—and then make it “baller” by upgrading the bacon to Ibérico de bellota. Or go crazy with the “breakfast grilled crack,” which has double the bacon, plus an option to add even more (recommended for those who keep their cardiologist on speed-dial). 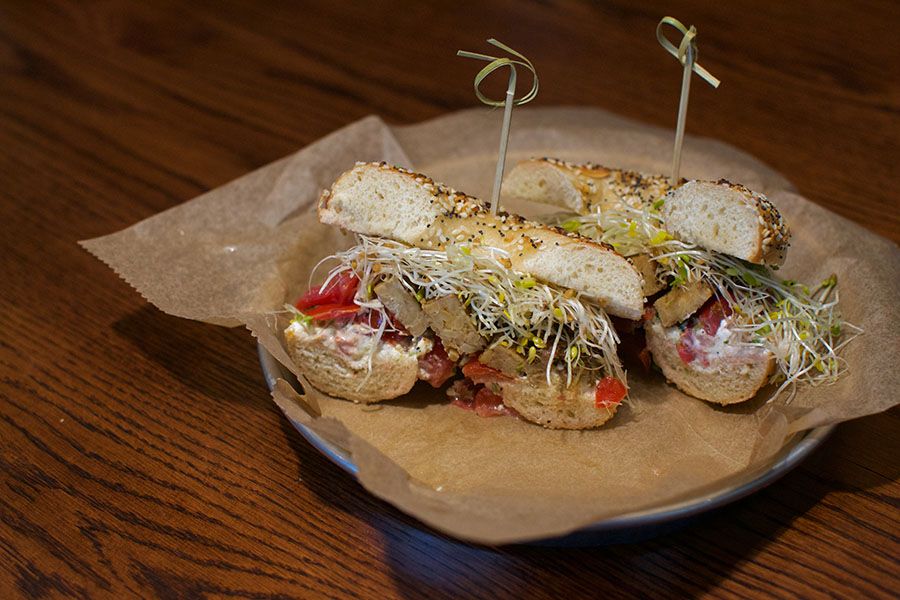 Breakfast sandwich connoisseurs can’t sleep on Pavement’s creations with cafés found all around Boston and another on the way to Harvard Square. It all starts with kettle-boiled bagels, rolled from scratch and stone-fired at Pavement’s Brighton kitchen. One surefire hunger-slayer is the Harper, slathered in lemon-dill cream cheese and topped with tomato, cucumber, and sprouts. Another is the Vegan Tequila, which features seasoned tempeh, diablo tofu spread which gets a kick from habanero and jalapeño peppers, pico de gallo, and sprouts. 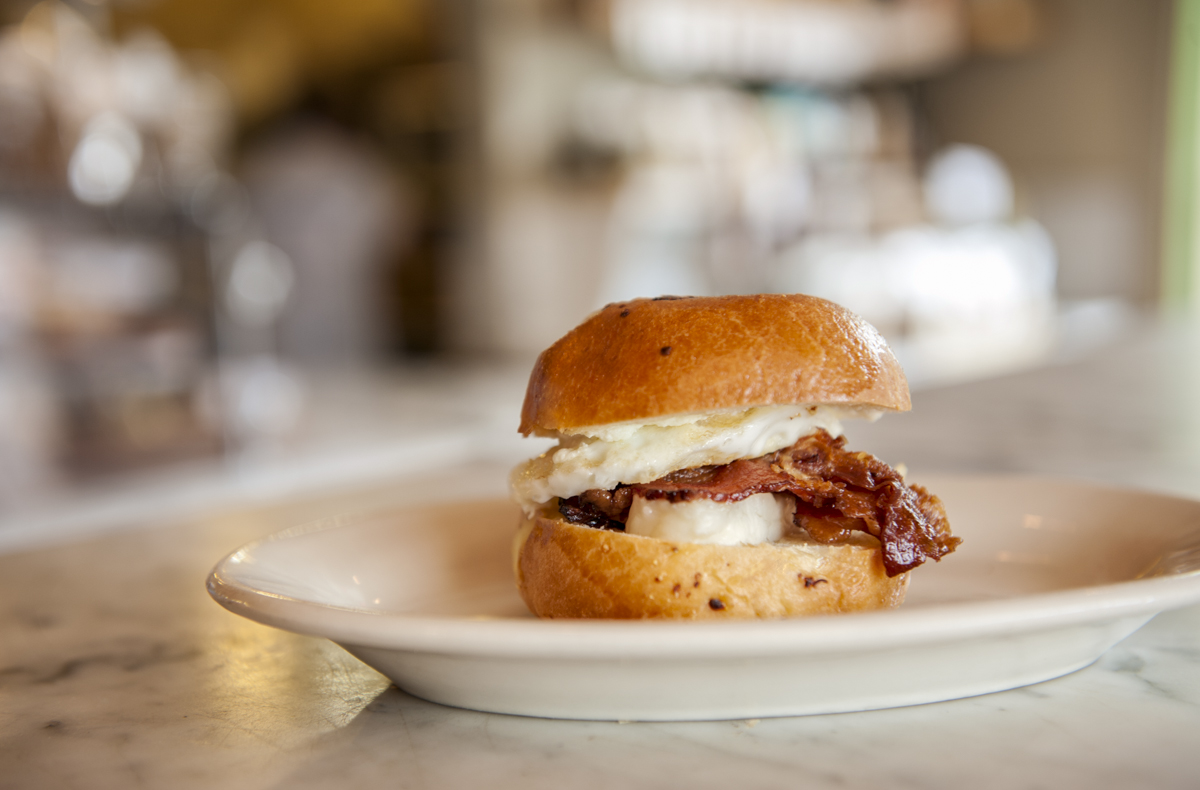 Considering that this Middle Eastern-inspired, cafe-bakery-specialty food shop gets its name from a Turkish word that means “a picnic, or a special table preparation of food,” it’s no surprise that to-go options reign supreme here. The shop features house-made preserves and signature spice blends, but the real star is the breakfast sandwich with fried egg, halloumi cheese, and feta butter on a house-made brioche bun. Be sure to add some zip with a dab of zhoug, a spicy herb sauce also used on Sofra’s shakshuka. 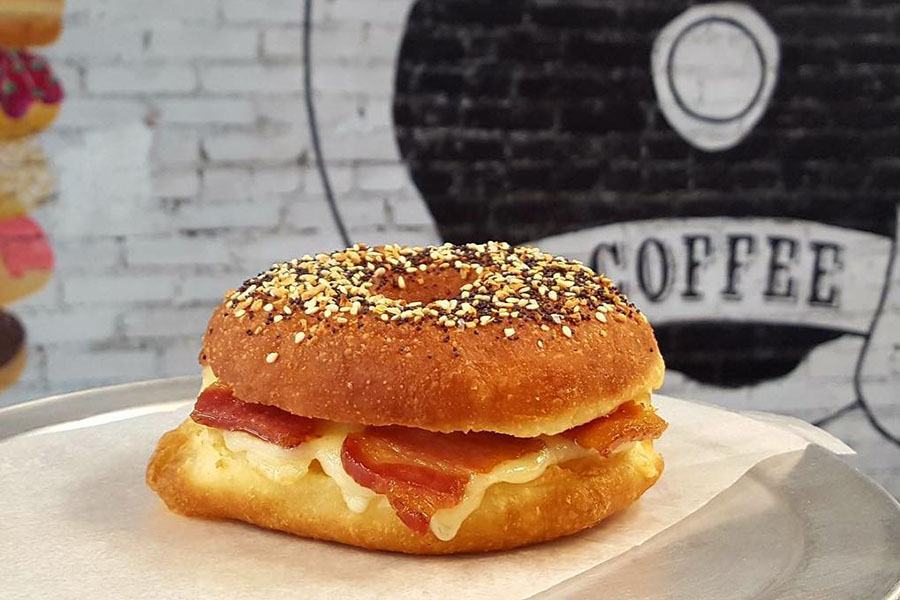 If Union Square Donuts first dipped a toe into the sweet-and-savory pool with the wildly successful maple-bacon doughnut, consider its doughnut breakfast sandwich a full-on cannonball. On a plain doughnut split like a bagel sits a scrambled-egg patty and Vermont cheddar, plus optional bacon, sausage, and maple mustard add-ons. Or, get your fix of omega-3s with the smoked-salmon sandwich, complete with red pepper cream cheese and a hard-boiled egg. Don’t forget the sprinkle of “everything” seasoning; it’s the magic dust that brings it all together. 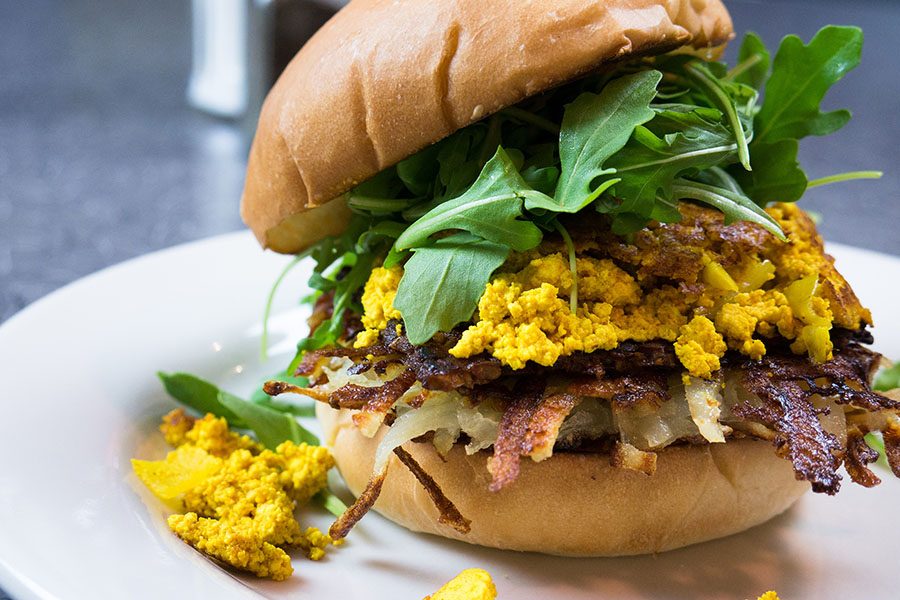 If the name wasn’t already a major hint, you can rest assured that Veggie Galaxy has you covered, herbivores. This Central Square classic is a diner with a twist: Not only is the menu completely vegetarian, but every item can also be made vegan (tofu scramble for fried egg, vegan cheese for classic cheddar). Look for a vegetarian version of egg and cheese on toasted sourdough, which is customizable with such add-ons as seitan sausage, tempeh bacon, and avocado. Or take things to a higher level of indulgence with the Great Galaxy, served on a griddled house-made bun with an over-easy egg, hash browns, tempeh bacon, and cheddar cheese.