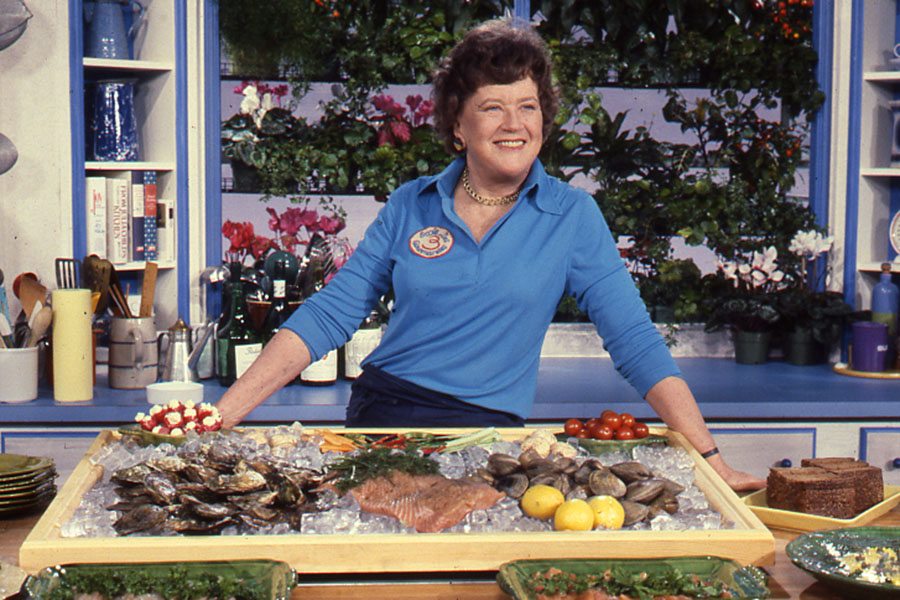 Julia Child, with shellfish, on an episode of The French Chef. / © WGBH Educational Foundation

Weekend plans: binge-watch vintage episodes of The French Chef, and maybe embark on an epic cooking adventure, to pregame what would be Julia Child’s 106th birthday (it’s August 15). WGBH, which produced the groundbreaking culinary TV show in Boston, just added a dozen classic episodes and counting to its online streaming service.

This is the first time WGBH has made full episodes of The French Chef available to an online audience. The show aired from 1963-73 and was the first cooking show on television.

Child, who was in her 50s when she started her broadcast career, built on the success of her cookbook, Mastering the Art of French Cooking, to introduce Americans to accessible French cuisine. Dishes like coq au vin and mousse au chocolat were thought of as restaurant indulgences only, but with her infectious love of food and wine and her down-to-earth instructional style, Child inspired a generation of home cooks to think beyond the microwave.

The show won a Peabody Award in 1964, and was the first educational program to win an Emmy in 1966.

“Julia Child was a pioneer, bringing her culinary talents to WGBH before anyone was offering cooking shows on television,” WGBH vice president for digital services Bob Kempf reminds us in a press release. “We are thrilled to now be able to offer The French Chef through WGBH Passport that our members can once again experience Julia Child, now when they want to see it and on whatever platform they prefer.”

Twelve episodes are now streaming on WGBH Passport, with 40 more headed for the web by Wednesday, Sept. 5, and different episodes rotating online throughout the year. The service is free for WGBH members. It offers some free programming for non-members, but access to content such as The French Chef is $5 per month without a WGBH membership. Besides The French Chef, the streaming library has episodes of Antiques Roadshow, Frontline, Nova, and other PBS television shows.

If you binge through all of the available French Chef this weekend but want more Julia Child, poke around on WGBH’s new online home for everything about the icon. You could also pick up a copy of her great-grandnephew Alex Prud’homme’s newest book, France Is a Feast. Published last year, it’s a visual extension of Julia’s seminal memoir, My Life in France, as it features a selection of her husband Paul’s artful and documentary photos, curated by Child family friend Katie Pratt.

Or, productively reorganize your kitchen with inspo from In Julia’s Kitchen: Practical and Convivial Kitchen Design Inspired by Julia Child, another new-ish book by architect and Smith College alumna (just like Child) Pamela Heyne and Boston photographer Jim Scherer. If this burst of creativity can’t be contained, take it all the way to France and book yourself a culinary stay at Child’s former vacation home, La Pitchoune.

No matter how else you spend the lead-up to Julia Child’s birthday, make some time to rewatch the delightful episode of Drunk History that chronicles Julia and Paul’s heartwarming courtship. It’s just the best.