Can this fried-chicken-filled crowd-pleaser stand out from the flock? 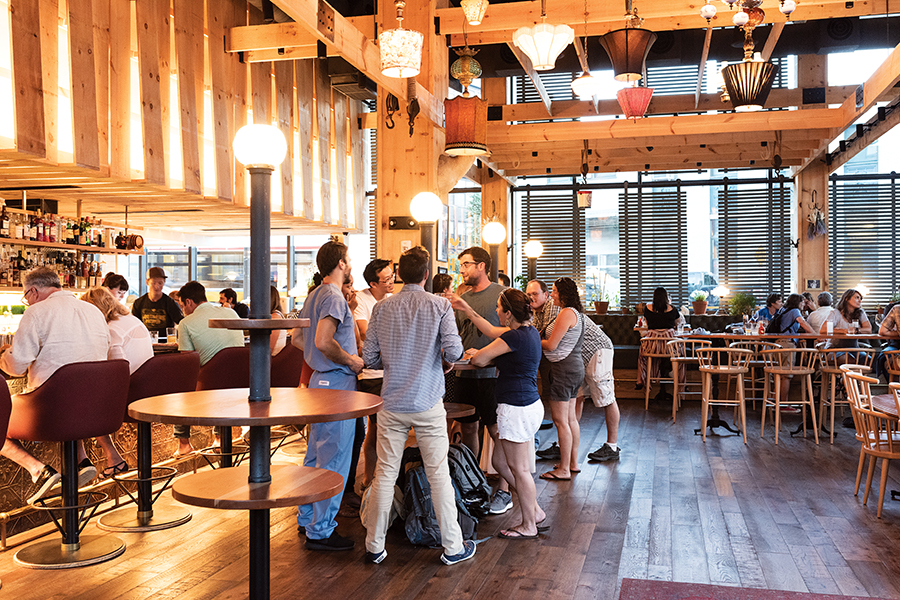 In The Millionaires, his 2009 novel about a pair of Tennessee country boys turned New South tycoons, Inman Majors writes that all political campaigns follow one of two themes: “Back to Basics” or “Bright New Day.” You could argue that this formulation extends to successful restaurants, which win over guests either by satisfying with the familiar or surprising with the unexpected. But if Southern Proper’s soaring, glass-walled space in Boston’s SoWa district suggests that it might challenge Yankee expectations of southern home cookin’, the menu dispels any such notions.

Not long ago, the mere presence of American South fare in the South End would have made for a destination-worthy restaurant. Local barbecue hounds, once bereft of options, can now barely swing a bone without hitting spots such as Sweet Cheeks in the Fenway, Shed’s downtown, and the trio of Smoke Shop restaurants in Boston, Cambridge, and Somerville. Beyond strictly barbecue, there’s been an influx of restaurants culling from various southern culinary traditions over the past few years, from the New Orleans–inspired Buttermilk & Bourbon in the Back Bay to the Frogmore, a Lowcountry specialist in Jamaica Plain, plus a small explosion of Cajun boiled-seafood joints like the South End’s Bootleg Special. 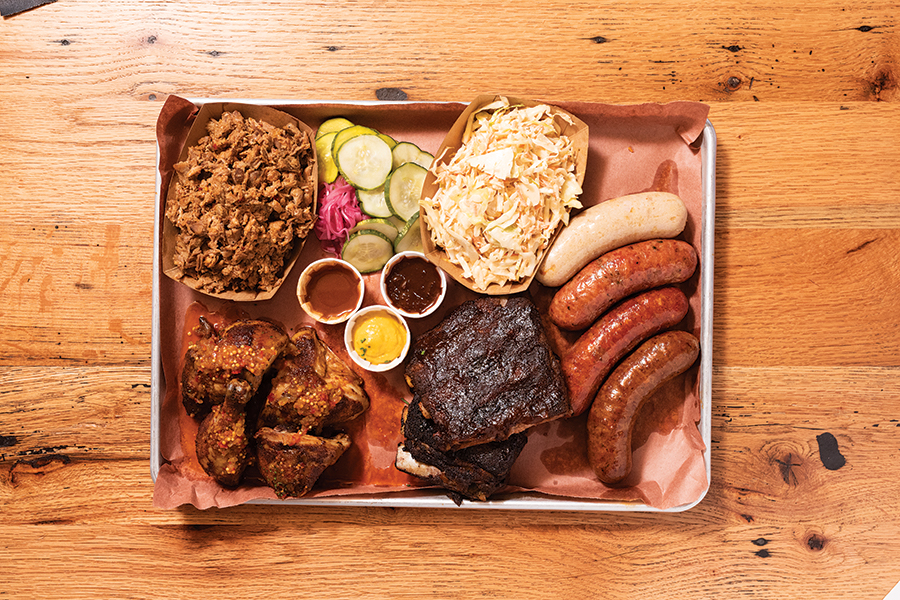 A tempting platter of barbecued meats and sausage. / Photo by Emily Sotomayor

At Southern Proper, start off with pimiento cheese, a staple of any southern picnic table. It appears here as a snack, covered in pepper jam with a pair of popovers ($12), which served ably as a vehicle for scooping up tangy-sweet mouthfuls. Even better, ask for an off-menu half-order of the pimiento cheese with a side of buttermilk biscuits ($7), which had the perfect balance of crispy crust and fluffy interior. Among the other smaller bites, Silver Queen hush puppies ($9) with spiced honey and salted butter were faithful to form and quickly devoured. But the smoked bluefish rillette lettuce wraps ($14) struck an off-key note—P.F. Chang’s meets church-potluck tuna salad. And though fried green tomatoes ($10), accompanied by excellent house-made pickles, came in a basket big enough to split four ways, the limp tomato slices offered neither enough crispy crunch or juicy tomato. It’s a testament to the accompanying cool dill-laced tartar sauce that we ate most of them anyway.

A look at the main dishes makes clear that this is the sort of restaurant to hit with at least three of your closest friends: There’s a lot on offer, and it’s hard to avoid leaving without a doggie bag sufficient to please a Neapolitan mastiff. St. Louis–style ribs ($22 for a half rack/$36 for a whole rack) arrived nearly pulled-pork tender, and avoided the common barbecue blunder of too much sauce. Pork belly ($15 for a half pound/$27 for a full pound) layered a coffee rub against the cut’s fatty glory well enough for one grizzled grill aficionado to pronounce it the best he’s had on either side of the Mason-Dixon Line in some time.

If you prefer your swine parts in sausage form, you can choose from a selection made in-house, including boudin blanc ($13), a white sausage found so widely in Cajun country you’d think it grows on trees. Cheek’s take, served with slaw, pickles, and mustard and barbecue sauce, feels authentic—minus the local-color experience of scooping your sausage out of a drywall bucket at some Louisiana gas station. 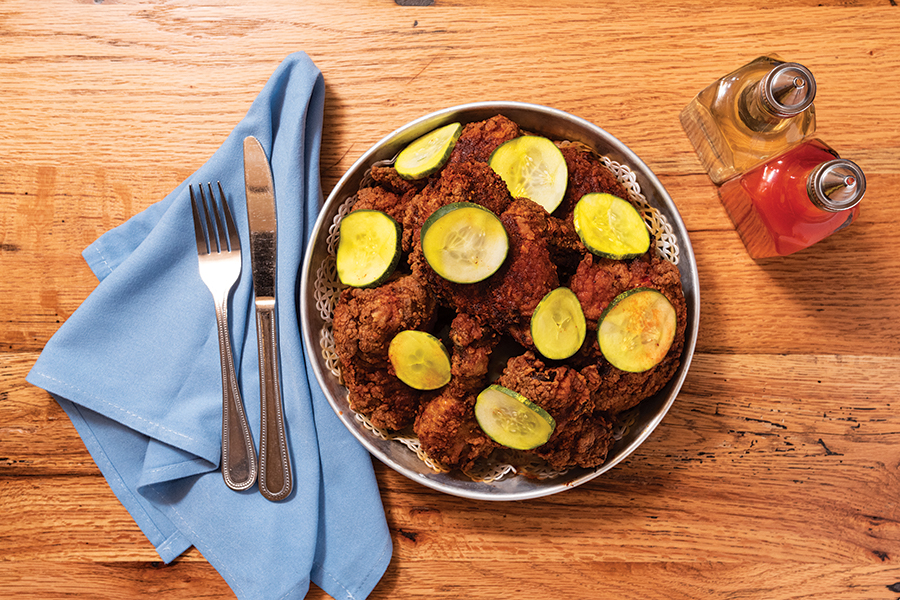 The fried chicken ($21 for four pieces/$37 for eight pieces) is likely to provoke some debate, particularly if you opt for the hot variety—and you probably should. The basic formula, as credited to Prince’s Hot Chicken Shack in Nashville, is simple: just-fried chicken is massaged in a mix of heated oil (lard, traditionally), cayenne pepper, and secret spices, turning the still-crispy batter a menacing shade of red. Cheek’s version leans more mild than wild on the Scoville scale, and left some in our group of spice fiends wanting a bit more burn from the bird. The Catfish Fry ($21), meanwhile, paired impeccable technique worthy of a Japanese tempura master with two generous but muddy-tasting filets. It was the only outright dud.

The “Farmhouse” section of the menu offers respite from all the protein. My favorite: the charred okra ($15) with smoked cauliflower and pickled chow-chow relish that delivered a welcome bright, sweet, vinegary contrast to the rich mains. If there is one thing I’d change about the menu, it’s the somewhat confused, unpredictable plating. Lonely chicken arrived à la carte, barbecue and sausage atop mountains of slaw, and seafood with paired sides. These plates scream to be shared family-style, and would benefit from the option to build your own main-side pairings.

The dining room has the warm and casual sort of polish that interior designers labor mightily to achieve. There are tall windows, acres of raw wood, and vintage lamps hanging upside down from rafters alongside taxidermied deer. Cheek says it was inspired by his grandmother’s living room; he must be related to Iris Apfel. The spacious bar punches well above its weight class with a rotating selection of elegant and inventive cocktails ($13), along with a solid assortment of local draft beers, bottles, and wine by the glass. There’s a large patio for pre-winter al fresco dining, and service was uniformly friendly and capable. Weekend brunch offers some high points from the dinner menu alongside a.m.-centric items, and an abbreviated lunch menu is available during the week.

Cheek has strong competition from the new wealth of southern-comfort food spots now scattered throughout the area. While Southern Proper will certainly save South Enders from needing to Uber elsewhere for their fried-chicken fix, it’s less certain that it deserves a drive from across town. Could that change? Cheek’s kitchen gets much right, and there are isolated flashes of excellence on display. But it still feels premature to say that Southern Proper is at its best.