Trillium Brewing Co. Will Open a Restaurant in Fort Point in October

Here's a behind-the-scenes look at the massive construction project. 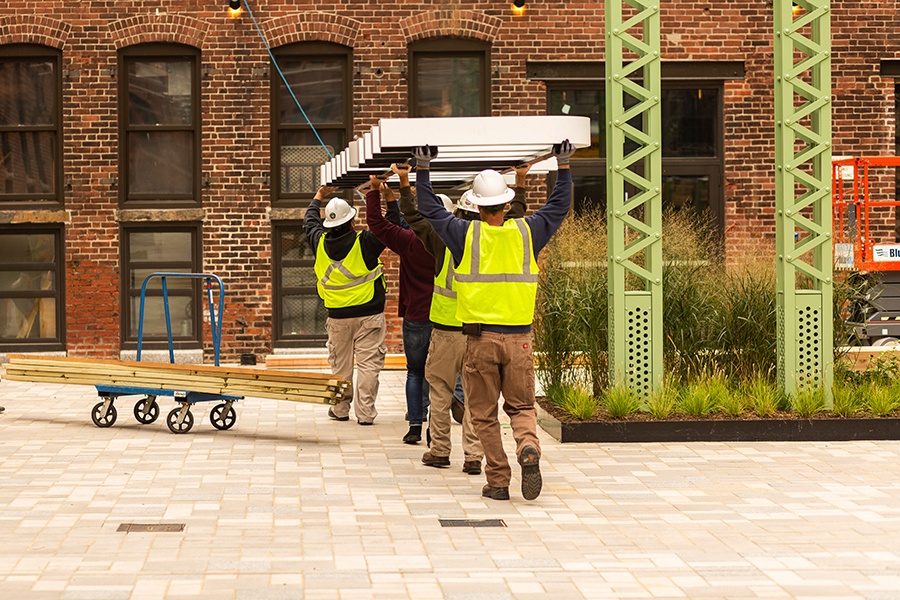 Trillium Brewing Company has been anything but quiet since announcing plans to open a restaurant in Fort Point nearly two years ago—its Canton brewery debuted an outdoor patio and bar, Trillium returned to the Greenway for another seasonal beer garden, it hosted its first beer fest, and the growing family company has announced plans to add a farm-brewery in Connecticut. But the team hasn’t said much about the Fort Point expansion—until now. Get excited: the Trillium restaurant is on track to open later this month, with three floors of beer and farm-to-table fare.

Boston magazine spoke with chef Michael Morway for our October issue, which is on newsstands now. Morway, who most recently helped to open Explorateur in downtown Boston, says his menu “will evolve and change as much as the beer does now,” with a focus on New England ingredients.

Now we know even more. Whether diners are looking for a quick lunch on their way out of town, a celebratory dinner with loved ones, or just a post-work snack and drinks, it will be possible at Trillium, says marketing director Jonathan Tompkins. That’s because the 18,000-square foot establishment on Thomson Street will span three floors. On the ground level, with views of the 10-barrel brewhouse, Trillium will debut a new retail store and taproom with a 23-seat bar and high-top tables. On the second floor, a main dining room looks through glass windows into the kitchen, which will be anchored by a wood-burning grill built by Blue Barn, a highly chef-sought Western Mass. maker.

There is an 85-seat private dining room upstairs as well, which is A/V equipped to host rehearsal dinners, corporate presentations, and other events. There will be a roof deck, though it remains to be seen if it will debut this year or next spring, Tompkins says. The whole place will have a seated capacity of 450 people.

There’s more to come from Team Trillium, but in the meantime, they shared this behind-the-scenes look at constructing the brewhouse and kitchen—check out the glamor shots of the five, new American oak foeders, which will be used for aging beers; and shiny, 10-barrel lagering vessels, which the production crew will use to grow Trillium’s portfolio of traditional lagers. There are also shots of the new Fort Point brewery’s conical fermentation vessels, its 10-barrel mash tun, and construction of the wood-burning grill.

The new brewery is joining Trillium’s existing production facilities in Canton and on Congress Street in Fort Point, though the latter’s retail shop will relocate to Thomson Street. The 24 individual draft lines at the restaurant will pour beers made on all three brewhouses.

“It’s going to allow us to experiment a bit more,” Tompkins says.

And as all of the company’s disparate projects over the past couple of years have demonstrated, Trillium is all about trying new things. “It’s all part of our plan,” Tompkins says, “of making sure we have all these different environments for people to enjoy our beer.”

Stay tuned for an opening date for the Trillium restaurant and brewery.