Pregame events at the TD Garden with farm coast-inspired fare at this independent, waterfront restaurant. 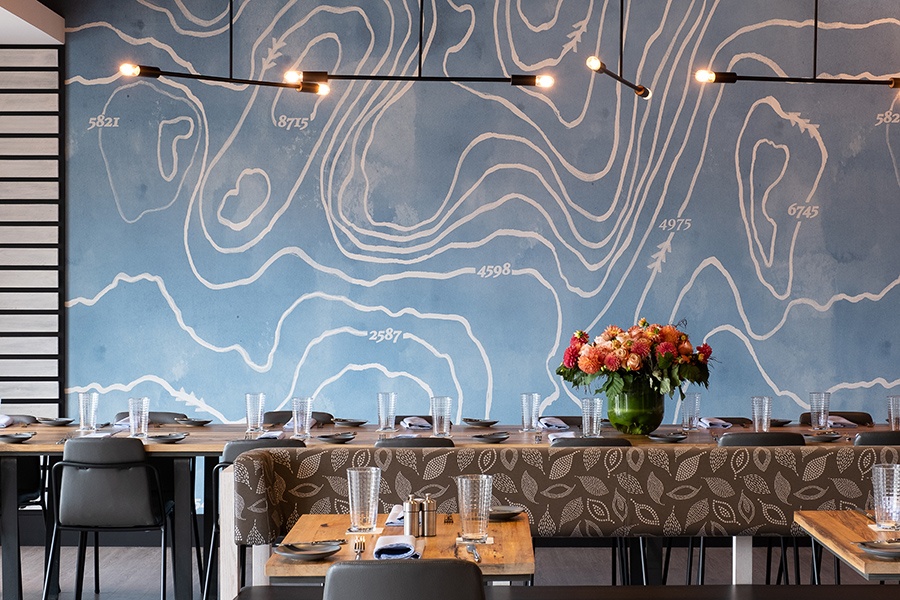 The far wall of the private dining room at Alcove is decorated with a bright blue topographical map, visible throughout the restaurant. / Photos by Emily Kan provided

Hospitality pro Tom Schlesinger-Guidelli had looked at dozens of spaces for his future restaurant before he found the perfect alcove in Boston: Alcove, officially opening tonight, is situated across the street from the TD Garden on the newly developed Lovejoy Wharf, overlooking the harbor in between the Zakim and Charlestown bridges. It’s an apt location for his farm coast-inspired restaurant and bar, which he hopes will contribute to the excitement of a fast-developing neighborhood.

The menu, overseen by executive chef Maxime Fanton, executive sous chef Brian Paszko, and pastry chef Alexandra Artinian, is set up for whatever the occasion calls for, with raw bar options, hand-sliced charcuterie and cheeseboards, Mediterranean-style snacks like marinated olives, and larger plates including bigoli with Rohan duck ragu, grilled swordfish with eggplant caponata, and charred maitake mushrooms over grilled polenta. The cuisine is inspired by the New England farm coast—the area between Cape Cod and Newport, R.I., which is home to agrarian farms and vineyards as well as a deep fishing heritage—as well as global “farm coasts” in the Mediterranean and beyond.

“There are so many opportunities to use different flavors and spice combinations that come out of different cuisines where these intersections of fishing and farming occur,” says Schlesinger-Guidelli, a Cambridge native who spent summers in the South Coast town of Westport. 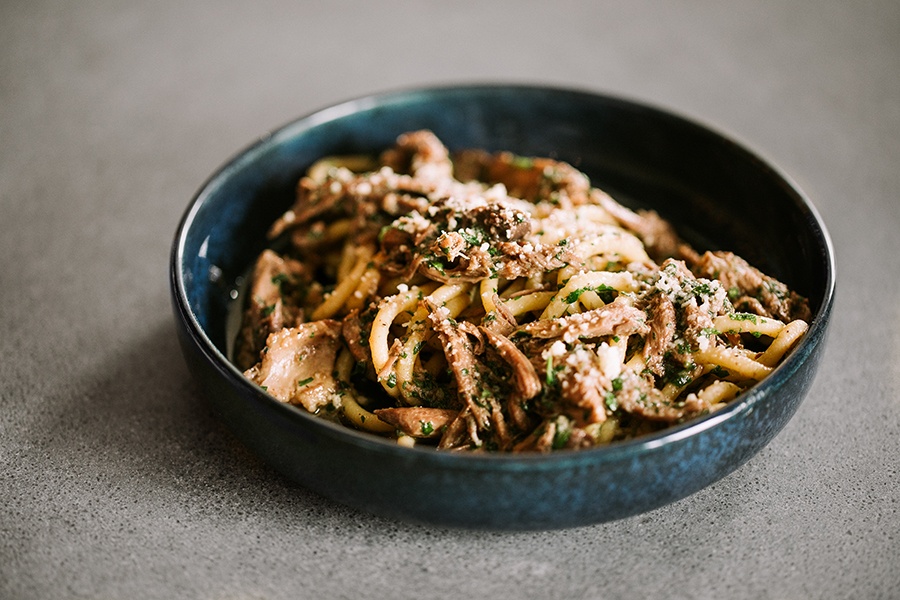 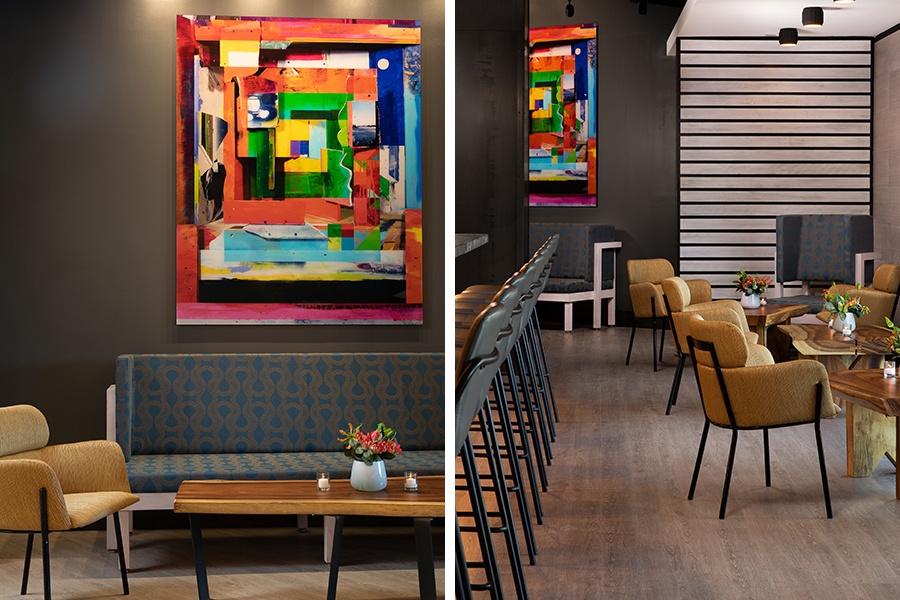 The “living room” at Alcove has comfortable sofas and low tables, plus colorful art by Quinn Gorbutt. / Photos by Emily Kan provided

The 260-seat restaurant has a few distinct spaces, designed by residential architect William T. Ruhl as his first restaurant project. The more casual, bar-focused “living room” has live-edge acacia coffee tables, couches, high-top standing tables, and a few tables at a back-wall banquette. The main dining room has cushioned chairs around custom-built tables with built-in leaves that can expand them for up to seven people. There is also a glassed-in, 25-seat private dining room.

Along the back wall of the restaurant, several stations showcase the action going on behind the scenes, including the raw bar, a charcuterie slicer, and a trough at the end of the bar designed to both chill and display wines offered by-the-glass.

There are also a few walk-in coolers full of the bottle selections, organized just like the written list is, from left to right, with each wine marked with its price. The idea is to make guests feel comfortable “shopping” the labels.

“We can just come have a conversation in the Champagne section,” says Schlesinger-Guidelli, “but you’ll still have a list in front of you if that’s [the way] you feel most comfortable [making a wine selection].” 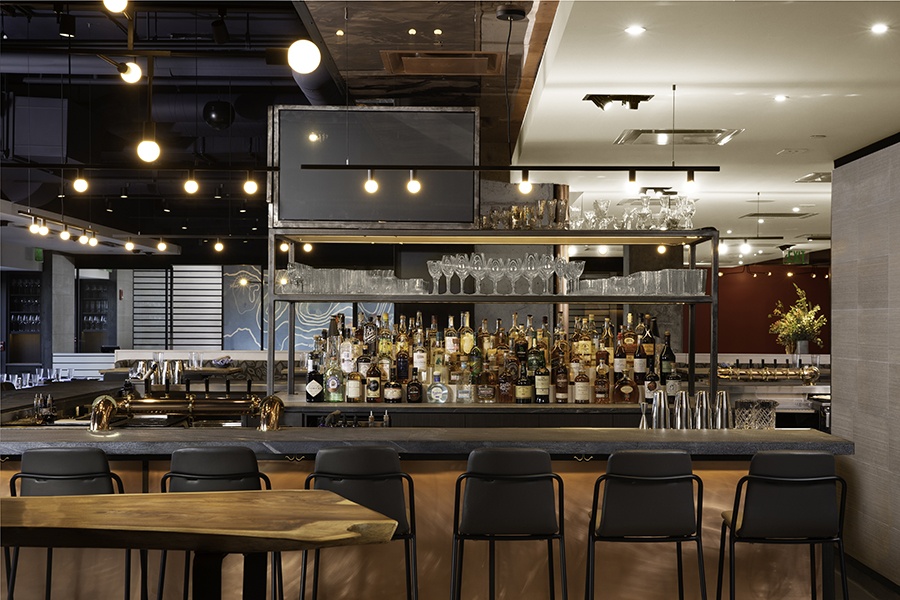 The huge, U-shaped bar in the center of the space makes sense, considering the 35-year-old restaurateur’s career history. After cutting his teeth at his uncle (and James Beard Award-winning chef) Chris Schlesinger’s restaurants, Cambridge’s East Coast Grill and the Back Eddy in Westport, Schlesinger-Guidelli joined Eastern Standard Kitchen & Drinks, where he left as second-in-command to venerable cocktail connoisseur Jackson Cannon. Schlesinger-Guidelli helped open Tony Maws’s Craigie on Main, then went back to Kenmore Square to open Island Creek Oyster Bar as the general manager. He has spent the past few years consulting on the beverage programs at his uncle’s the Automatic bar in Cambridge, Tracy Chang’s Pagu, and the reimagined ArtScience Cafe and Culture Lab, all while planning Alcove.

He toured more than 100 spaces for his future restaurant, but “I felt it when I walked down here and saw everything that was coming together in the neighborhood,” Schlesinger-Guidelli says, standing in the limestone breezeway which guests will pass through to access Alcove from nearby North Station.

He’s referring to the development happening in the West End, the neighborhood in between the North End and Beacon Hill. Along with the Lovejoy Wharf building, the Hub on Causeway is going up nearby, promising nearly 2 million more square feet of residences and retail amenities, including a huge Star Market and a music venue. The Beverly, Avalon North Station, and other new residential buildings have gone up in the West End in recent years, too.

But Schlesinger-Guidelli is also talking about the more storied landmarks. The breezeway frames a peek at Charlestown’s Bunker Hill Monument, flanked by the bridges. The TD Garden’s lights reflect off the water. Walking to the restaurant, you get a unique vantage point on Boston, says Schlesinger-Guidelli, and “I find it really relaxing.”

The burgeoning neighborhood is perfect for his vision of a restaurant fit for everything from a quick, Tuesday night dinner at the bar, to a celebratory anniversary meal, and everything in between, he says.

Next spring, there are plans for a waterfront patio at Alcove, with dining tables as well as high-tops for standing and sharing drinks and snacks over harbor views. Schlesinger-Guidelli is also excited about the prospect of taking a water taxi right from Alcove up to the forthcoming Encore Boston Harbor resort casino, which will eventually be possible.

The first-time restaurateur is grateful to Alcove’s investors for helping him become one of Boston’s few independent operators to have a waterfront restaurant.

“As much as I love some of the larger restaurants in Boston, I don’t think it does the diversity of our restaurant industry justice that there aren’t more independently operated waterfront establishments,” he says.

And as Alcove helps to prove, there is room for more than just sports bars around North Station. City Winery has brought live music and more to the neighborhood. Night Shift Brewing is opening a brewpub at Lovejoy Wharf, and A&B Burgers is expanding to Causeway Street from Beverly later this year, too.

Alcove will make for a prime pregaming spot ahead of Celtics and Bruins games this winter. It’s open nightly for dinner at 5 p.m. (4:30 on Sundays), with the bar going until midnight. Lunch and brunch are coming later this year. 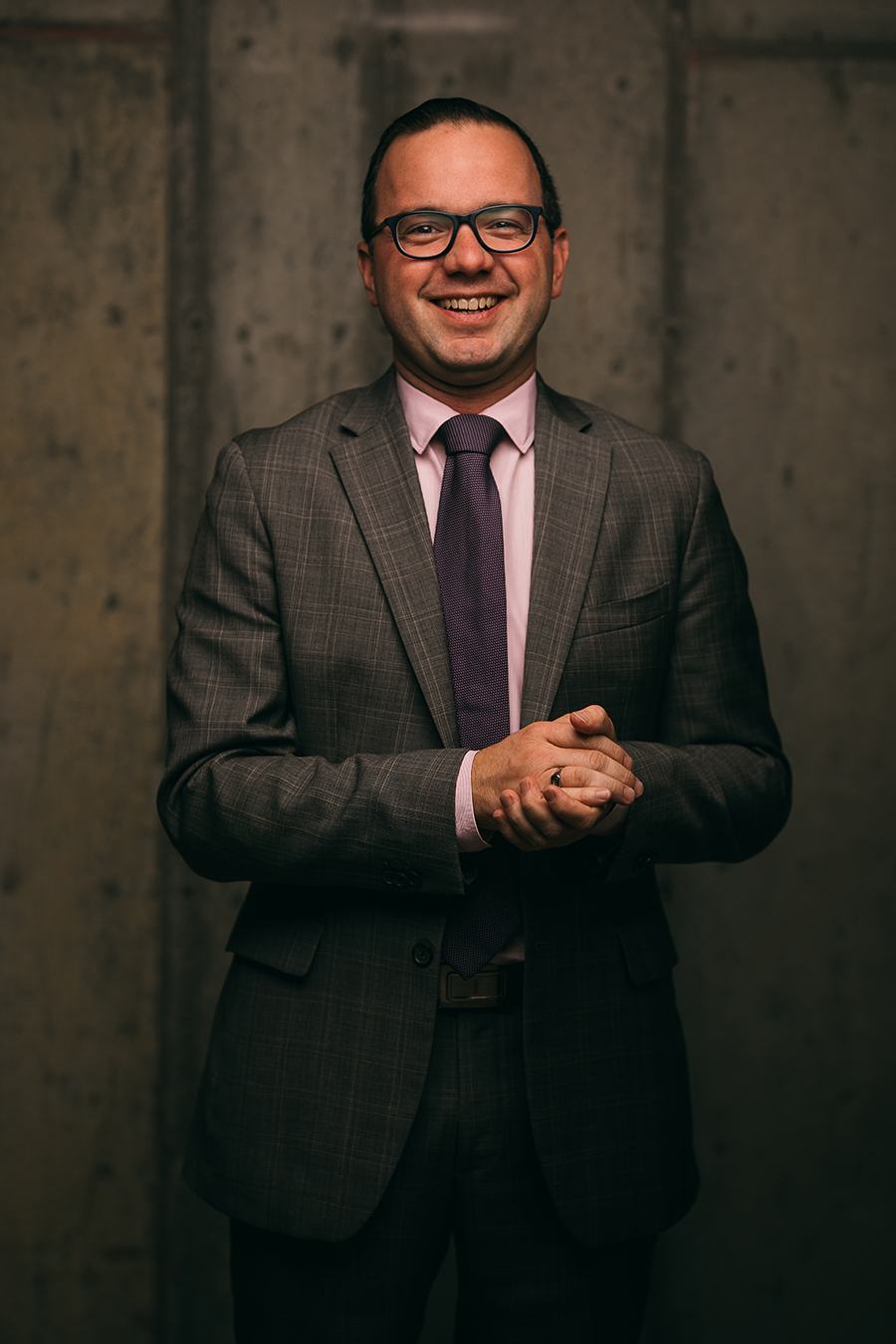