Two Bostonians Are Competing to Be the Next Top Chef

Adrienne Wright of Deuxave and Brian Young of Cultivar will represent Boston in Kentucky on the 16th season of the Bravo reality show. 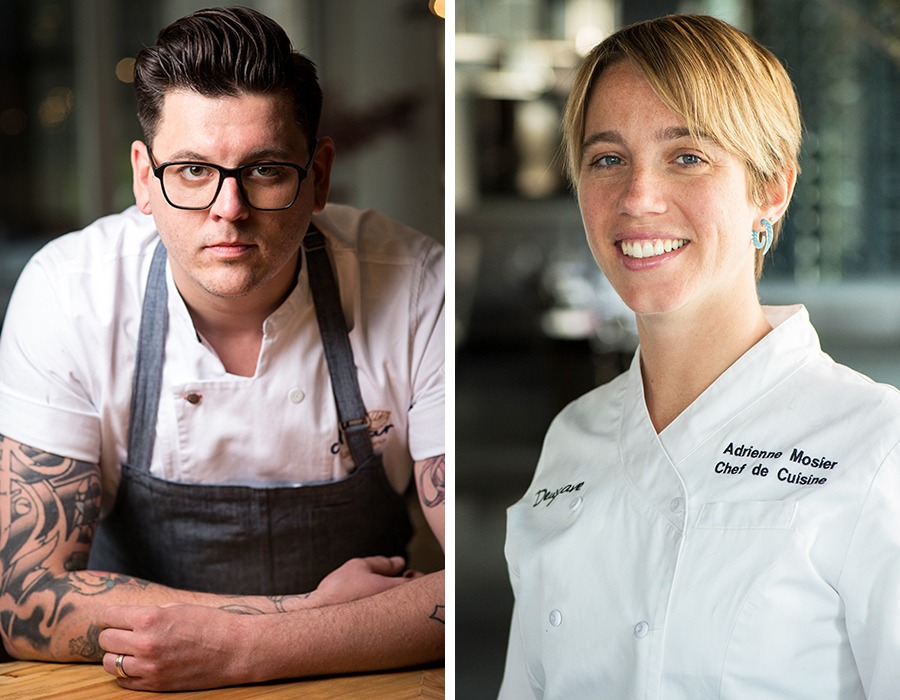 The Boston restaurant scene has two chances to claim the next Top Chef: Adrienne Wright, executive chef of Boston Urban Hospitality Group restaurants Deuxave, Boston Chops, and dBar; and Brian Young, who is the chef de cuisine at Cultivar, will be competing in Kentucky when the popular reality cooking competition returns this fall. Bravo TV just announced the details of Top Chef season 16, which premieres on the network in early December.

This season’s challenges will take place in Louisville, Lexington, and Lake Cumberland, but the finale will be in Macau, China. Host Padma Lakshmi and head judge Tom Colicchio are returning, along with frequent guest judges Graham Elliot and Nilou Motamed of Food & Wine magazine. Sometimes-Masshole Gail Simmons will also be back this season, though less frequently than she has in past Top Chef seasons as she took maternity leave earlier this year.

The first trailer released today shows Bostonian and Top Chef alum Karen Akunowicz will pop in to judge at some point this season. The owner of the forthcoming Fox & the Knife is part of a star-studded lineup of guest chefs and entertainers, including Fall River’s own Emeril Lagasse, the venerable Eric Ripert (of Le Bernadin fame), actress Lena Waithe, Kings of Leon frontman Caleb Followill, and others.

The trailer also shows a fast-paced clip of what seems to be the short-haired chef Wright authoritatively bossing around some fellow chef-testants. Check out the video below.

Wright, who started as Chris Coombs’ sous chef at Deuxave in December 2011, rose the ranks there to become chef de cuisine, and was a Zagat “30 Under 30” winner in 2015. In late 2016, she was promoted to oversee the entire restaurant group as BUH planned to open its Downtown Crossing steakhouse. A Johnson and Wales alum, Wright spent time traveling and cooking in Asia before stints at Ogunquit, Maine’s acclaimed Arrows Restaurant, then Radius, and No. 9 Park in Boston. Per her Boston Urban Hospitality bio, she dreams of opening a farm-to-table restaurant with her family in northwestern Connecticut “and paving the way for powerful female chefs to establish their own identities and brands.”

Young was born in Texas, then raised in New Hampshire and later, in Nashville. He’s a musician, and an alum of Vermont’s New England Culinary Institute. The 2014 Zagat “30 Under 30” honoree cooked in Big Sur, Calif., and Saint Albans, Vt., before becoming Mary Dumont’s chef de cuisine at Harvest. Young had kitchen leadership roles at Citizen Public House, Post 390, and Townsman before he rejoined Dumont at Cultivar when it opened in 2017. Top Chef isn’t Young’s first taste of the limelight: He tried to Beat Bobby Flay in 2014.

Wright and Young will join the likes of season 1 contender Tiffani Faison, season 10 winner Kristen Kish, and season 13 fan-favorites Akunowicz and Carl Dooley among Bostonians vying for the Top Chef title (and the $125,000 cash prize). See how they do when the season begins Thursday, Dec. 6, at 9 p.m. on Bravo.

In the meantime, check out the Top Chef season 16 trailer, and the full list of contestants.

This post was updated October 23 to clarify where chef Brian Young was born and raised.