The future of the East Boston pie shop is up in the air. 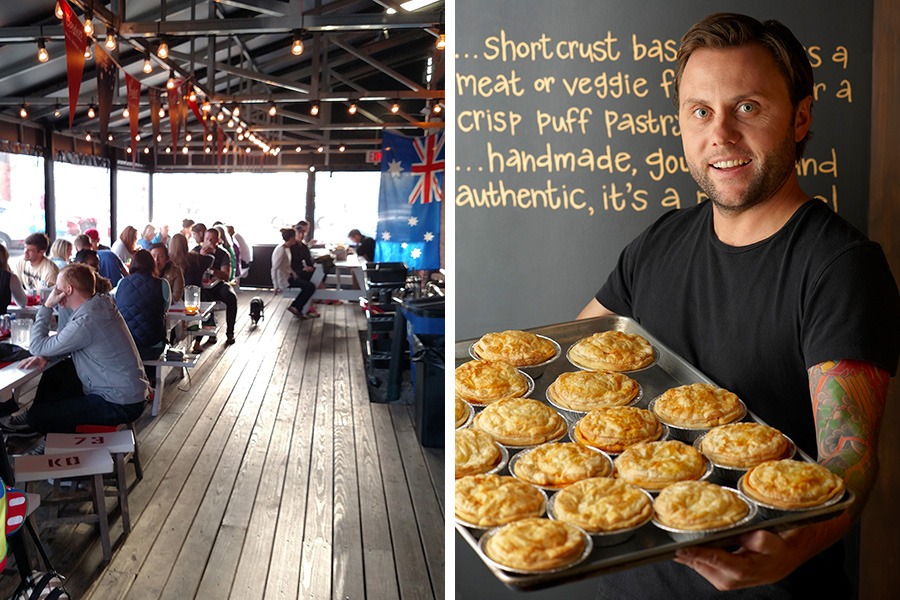 On October 26, 2010, the onset of early sunsets and frigid, dark mornings in Boston was tempered by a little taste of Australia when KO Pies first opened. But after eight years, this might be the unique company’s final winter. Owner Sam Jackson plans to sell his business in East Boston and say goodbye to New England next year.

It will be tough news for fans of Jackson’s simple, savory pies and Coopers beer-fueled patio parties in the artsy, industrial shipyard. But for the chef, it’s exciting.

“I probably couldn’t have predicted, eight years ago, the incredible success and wonderful patronage and every other little part that came along with KO,” Jackson says. “I’m getting to that point to try something new. If I can figure out how to sell pies to Americans, I’m pretty sure I can figure out something else fun and exciting [to do]. I just want adventure.”

Jackson, who hails from the coastal city of Wollongong, just south of Sydney, cruised into Boston Harbor for the first time in 2007. The chef had spent the previous decade in fine dining, first in Europe and the U.K., then as a private chef on luxury yachts. He settled in New England when one of his clients gave him a gig on land. After a few years, he noticed a pie-shaped hole in the Boston dining scene, and purchased a Southie building with partners to open a small, retail-focused first location of KO Pies. Jackson took over the former Scup’s in the Harbour and expanded into the East Boston Shipyard in 2012.

KO Pies was on the forefront of the development boom in both neighborhoods, and that has allowed Jackson to cash in now that he’s ready to move on, he says. (Before he wanted to leave Boston, being a property owner in a hot neighborhood also caused Jackson a fair share of headaches. In 2015, the chef criticized plans for 100 condos and new retail on KO’s South Boston block. “If those asshole developers taught me anything, it’s capitalize on a hot market,” he says today.)

Last month, Jackson announced that he and his business partners sold the Southie building, and the original KO Pies had closed for good. Jackson sub-leases his East Boston restaurant from a private landlord within the Massport-owned parcel. Whether he sells his business or just its assets, including a 7-day beer and wine license, remains to be seen.

Jackson envisions three probable outcomes. Someone could buy KO Pies and continue to operate the Australian pie shop; or a new owner could take over KO Pies’ licensing and infrastructure to open a different business there. Either of those scenarios is subject to approval of landlords and city regulators. Or thirdly, no one could bite on the Shipyard opportunity, but instead Jackson and his team runs out his lease (it’s valid through December 2019) and sells his 7-day beer and wine license, “which for better or for worse in this town is a valuable asset,” he notes, “and I sail off into the sunset.”

In the meantime, it’s business as usual at KO Pies at the Shipyard. Jackson plans to take an extended break around Christmas, as he usually does, and close KO Pies for a few weeks. In early 2019, look for details about the final Dundee Pie Challenge, the pie-crusted guest chef throwdown now in its 9th year. Jackson also hopes to celebrate one more Australia Day in January, and wants to host more chefs and other industry friends for collaborations and pop-ups, if time allows.

Jackson wants to see all of KO Pies’ regulars for a few more pints, pies, and rounds of cornhole, he says, before whatever is in store for the shipyard area and the wider neighborhood.

“I realize Eastie is the hottest it’s ever been,” Jackson reflects, “which is awesome that we are a small part of it.”

KO Pies at the Shipyard is open, for the time being, Wednesday-Sunday from noon-10 p.m.