Boston Has a Full-On Hanukkah-Themed Bar This Year

The pop-up Maccabee Bar takes over Better Sorts Social Club during the Festival of Lights. 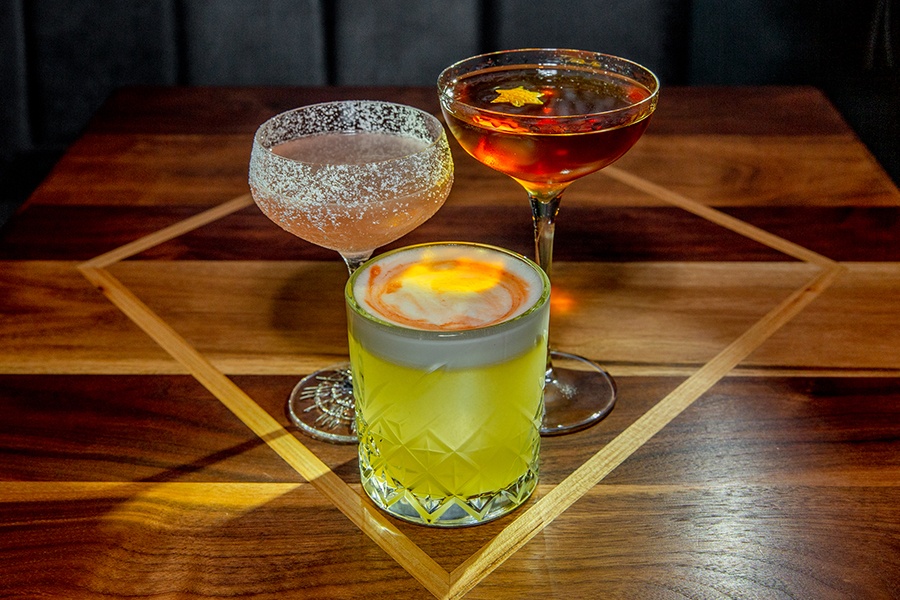 The Hebrew Hammer, Latke Sour, and the Manishevitz Martinez from the pop-up Maccabee Bar at Better Sorts Social Club. / Photo by Mike Diskin

Christmassy flavors like gingerbread, peppermint, and citrusy cranberry tend to appear ad nauseam on bar menus this time of year. But folks who celebrate Hanukkah have their own range of seasonal tastes, and next week, downtown Boston receives its first-ever Hanukkah-themed pop-up bar: Maccabee Bar, which takes over Better Sorts Social Club, the new Kimpton Nine Zero Hotel bar, to serve cocktails and snacks inspired by the Jewish holiday.

Maccabee Bar is unrelated to the pop-up Miracle Bar, which just reopened for the season in the lobby bar at the Kimpton Marlowe Hotel, and at Mystic Station in Malden. After launching in New York City in 2014, Miracle Bar now brings a Santa Claus-approved winter wonderland of Christmas-themed craft cocktails, fare, and décor to more than 50 bars around the country.

Better Sorts beverage director Naomi Levy wanted to create a Hanukkah-themed bar because while she loves the merry brightness of Christmas-themed drinks and parties every season, “I don’t totally relate.”

“I didn’t grow up with Christmas,” says Levy, who is Jewish. Maccabee Bar is a way to spread some holiday cheer for people who celebrate Hanukkah specifically, but Levy also hopes that people who don’t celebrate the Festival of Lights will enjoy it. The eight cocktails she created for the pop-up play with traditional Hanukkah flavors, but also more broadly celebrate the Jewish experience, she says.

For instance, the vodka-based Hebrew Hammer is meant to evoke sufganiyot, a festive jelly doughnut eaten during Hanukkah; the drink combines raspberry and lemon flavors with a bit of breadiness imbued by “leavened” sugar, what Levy calls a simple syrup with added dry active yeast. Her Latke Sour features potato-infused simple syrup and apple brandy, and a Manischewitz Martinez uses a vermouth made in-house with the well-known kosher wine. There’s even a drink highlighting Chinese flavors as a nod to takeout-fueled “Jewish Christmas,” Levy says.

Better Sorts chef Steve Hamilton has a complementary food menu on deck, bolstered by the likes of curried sweet potato latkes with pickled crab apples and labne; smoked brisket with roasted onions and mushrooms; and huckleberry jam doughnuts. The scene will be set with a blue and silver color scheme and other “fun stuff to make the place feel festive,” Levy says.

Maccabee Bar will be open at 5 p.m. nightly from Tuesday, Dec. 4-Saturday, Dec. 8. (Hanukkah runs from Sunday, Dec. 2 through Monday, Dec. 10.) Meanwhile, Miracle Bar is open daily at Mystic Station, and every night at 5 p.m. at the Marlowe, until Monday, Dec. 24. The Cambridge hotel is also accepting private reservations for up to 40 guests at its Miracle Bar this year; call 617-395-2523 to inquire.