The Season 16 contestant chats about reality TV and the upcoming Beacon Hill restaurant. 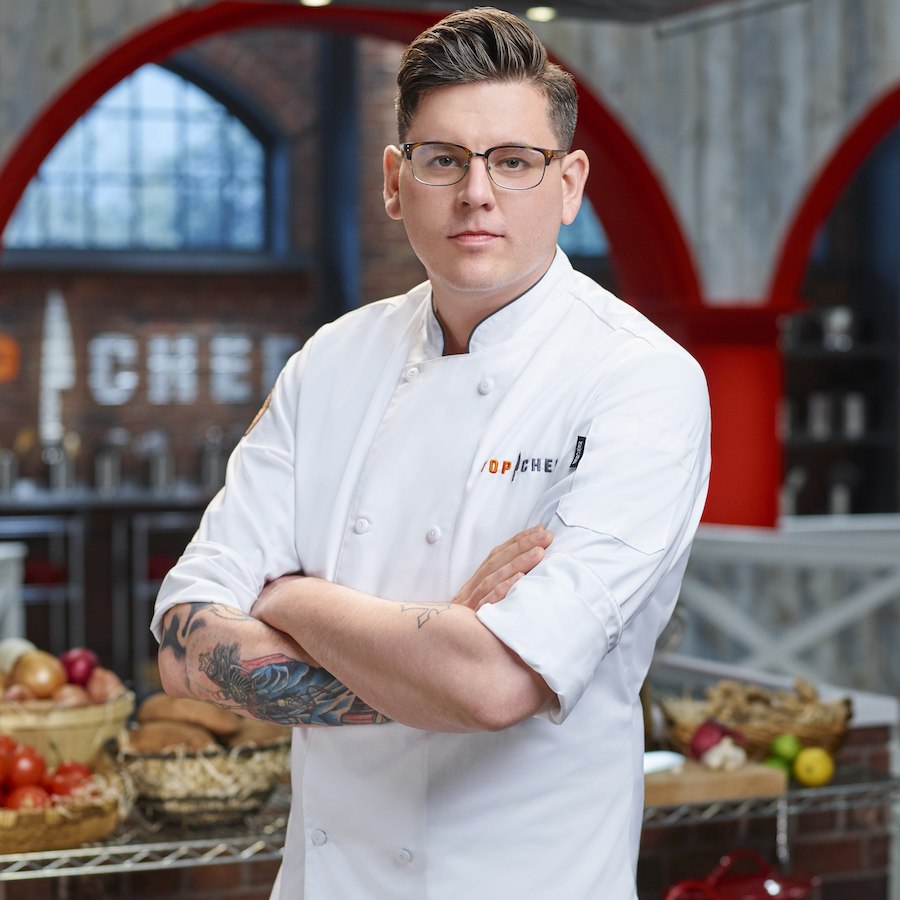 He can’t share spoilers. (Trust us, we tried.) But however he fares on the new Kentucky-set season of Top Chef, which premieres on Bravo on Thursday, chef Brian Young has big, exciting changes ahead. Young is currently chef de cuisine at longtime mentor Mary Dumont’s downtown restaurant Cultivar, but he will soon take an executive chef role at the Emory, slated to open in April in the Beacon Hill space currently home to Scollay Square.

Maybe this top-billing status is a sign that Young makes it far in his Top Chef experience. Or maybe it’s just the natural next step for a chef who has honed his craft at local spots like Harvest, the Harvard Square farm-to-table where he first worked with Dumont, and Citizen Public House & Oyster Bar, where signature pig roasts spotlighted Young’s serious nose-to-tail know-how. Top Chef isn’t Young’s first reality-TV rodeo—he failed to Beat Bobby Flay back in 2014—but it’s certainly his biggest stage yet. We spoke with him about what he learned from the experience, competing alongside fellow Boston chef Adrienne Wright, and why it feels like the right time for a new adventure.

Did you have any hesitation about putting yourself in the hot seat with Top Chef? After all, with competitions like this, there’s always the question: How will I look?

No. It was really an honor just to be in the company of the chefs who got to participate. Honestly, I don’t even think it’s how well you do—it’s that you get to be there. You get to be in the cut with these people who are so talented, so gifted at what they do. Was I scared? Yeah. I was scared the whole time! But as long as you’re comfortable with yourself, other people’s expectations can be what they are. You just represent yourself the best way you can. And I did terribly on Beat Bobby Flay. So I’m already over that. You know what I mean? [Laughs]

Were you excited to see a fellow Boston chef in Adrienne? Did you already know each other?

What’s funny is, I didn’t know her at all. And none of the producers believed us. They were like, “Yeah right. You guys are lying.” We were like, “No! We really don’t know each other!” But we definitely had an instant friendship. We have respect for one another, because even though we didn’t know each other, we were familiar with what the other does in the community of restaurants and our body of work. So it was nice to be able to have somebody to relate to and cook next to who I knew I could trust. Boston versus everybody else, you know what I mean?

Okay, but at the same time, did having another Boston chef there make you even more competitive?

Adrienne and I definitely have different philosophies about competition. Adrienne is very competitive, and I’m much more of a collaborative guy. I love working with other people. I think that was my favorite thing. And I feel like Adrienne is the one with the competitive streak. And you know, that’s awesome. She’s really great. We had a great time on the show together.

If you were sitting on the judge’s panel, which Top Chef judge would you be most like?

I think I’m a little bit like Tom. I sort of have a wry sense of humor about life in general. And you know, he’s not afraid to just tell things the way they are, but do it in a way that’s not offensive. So I definitely look up to Tom for that. He’s a totally normal dude, he has a good sense of humor about things, and he gets frustrated—and I get frustrated! 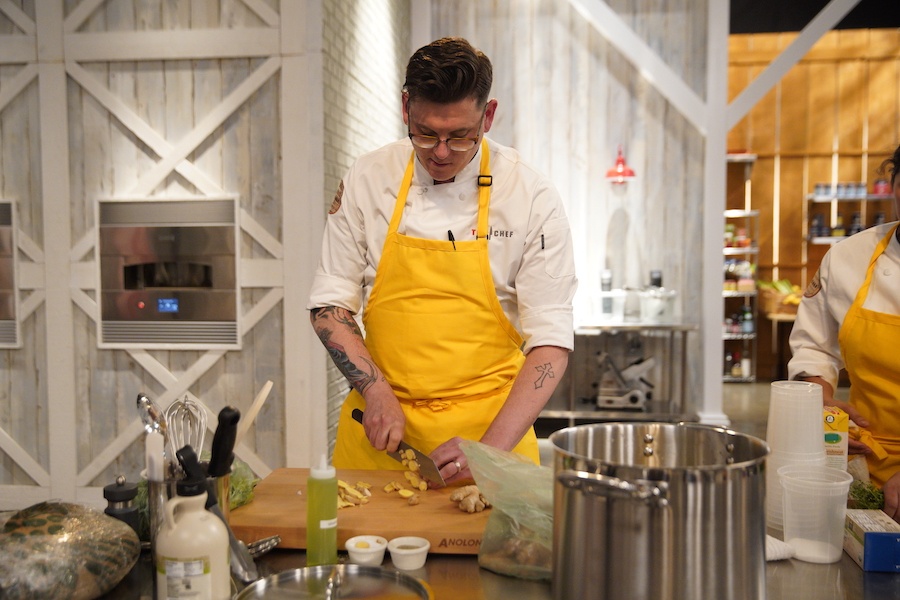 What did you most learn from your experience on Top Chef that you’ll take back to Boston kitchens?

It was great spending time with this cast, overall, just talking to each other about how and why you cook a certain way, and learning new techniques from each other. It was a really enriching experience as a chef. You get to be sequestered from the whole world, basically in a think tank with some of the greatest chefs in the country. I brought back a lot of techniques that I saw other people do and then asked about later when the cameras were off. It helped me grow as a chef because it helped me understand that a person’s perspective is really who they are as a chef. People can be doing the same thing from a different perspective, and that’s what makes the difference. That’s what makes their food electric and special. I have a greater respect for chefs in the industry as a whole. You get to know people’s struggles in life, while they were coming up, how they cook and how they are in the kitchen.

You grew up in neighboring Tennessee. What was it like to be back in the region where you were raised?

You know, I was familiar with some of the places. I felt like I was good at connecting with people from that region because that’s where I grew up. I mean, I don’t know if it helps you in the competition, but it helps to be comfortable with other people, knowing how to be sweet and bat your eyes at the right people. [Laughs] You know what I mean?

I think that it’s really interesting, being in a city like Louisville that is coming into its own identity as a food city. There’s some great restaurants like Butchertown Grocery, which blew my mind. And you know, they are definitely paying attention to trends. They are in step with trends, but also really have a sense of identity: that they are doing things in Louisville, Kentucky. So the lens they’re looking through changes. I thought that’s really cool. And I think Boston chefs are pretty good about having that Boston identity. I’m really proud of Boston, otherwise I wouldn’t be up here. So I don’t know if I would change anything about us—except, you know, maybe we could learn from the South to be a little bit more laid back.

Why did you decide it was time to move on from Cultivar?

Mary’s been an incredible friend and mentor to me. We just realized the other day that we’ve been working together on and off for ten years. She’s somebody who I go to for advice, and I have always enjoyed my time working for her. So it’s definitely bittersweet, leaving Cultivar. But I think it was just time for me to strike out on my own and leave the nest. And the timing was right. So you know, sometimes you just jump.

How did the Emory come about, and what can you tell us about it so far?

I met [owner] Andy Kilgore by chance, we got to talking, and what he wanted to do piqued my interest. I wrote him a sample menu. You know, just kind of throwing it out into the world. And he was psyched! Our whole philosophy about everything is: we want to have a good time. You know, I’m not going to try to reinvent the wheel. I just want to show people what I am really good at. It will be a very protein-forward place with a really small menu that changes all the time. Even now, I’ll look at something that’s only been on the menu for two weeks and I’ll just change it. So there will be a lot of that. I’m really excited.