‘Tis the Season to Tune Into Holiday Baking Championship

Spoiler alert: Local pastry instructor Douglas Phillips has made it to the final four. 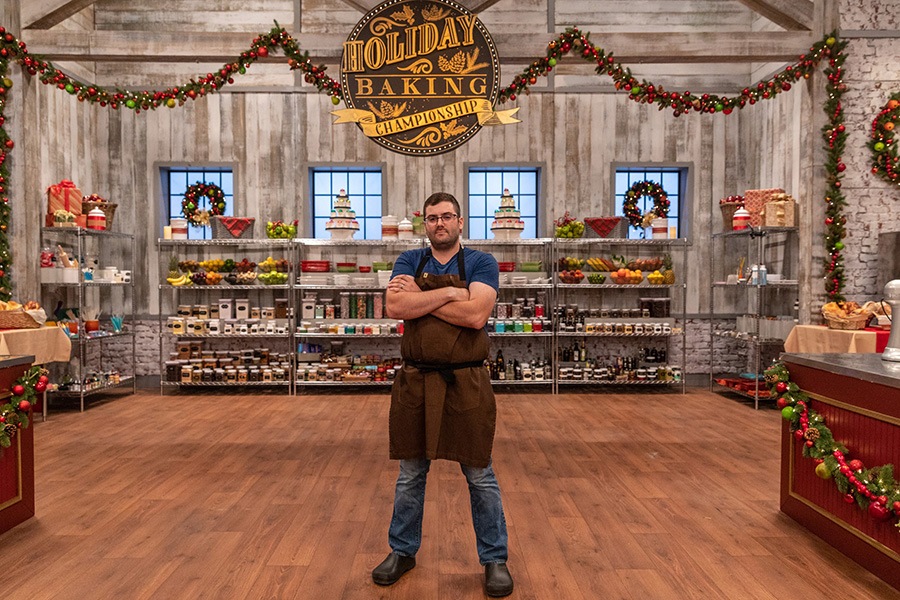 The pumpkin-pecan crumble muffins cooling on my countertop are proof that Holiday Baking Championship is inspiring me. I’ve been watching this season—the Food Network show’s fifth—for local pastry instructor Douglas Phillips, and like my coworkers who got those muffins this morning, I’ve been rewarded. Phillips—formerly of Woods Hill Table, and currently a baking instructor at North Shore Community College—made it to the final four contestants in last night’s episode.

He almost didn’t, though. As my muffins cooled in their tin, I watched judges Duff Goldman, Nancy Fuller, and Lorraine Pascale criticize Phillips’s tiramisu. In the Hanukkah-themed fifth episode, the competing chefs blindly picked two mismatched flavors for their layered desserts, then also had to incorporate maple syrup somewhere in the dish.

Phillips had talked to the cameras about his distaste for the green tea (“matcha tastes like dirt to me”), but his problems proved more elemental. His tiramisu wasn’t high enough, the green madeleines he made instead of the dish’s traditional ladyfingers were too dense, and the vanilla-maple pastry cream he chose to make “panna cotta-style” was gummy and didn’t make sense to the judges (nor to this tiramisu lover watching at home).

When Phillips ended up among the bottom two bakers last night, I actually thought he was headed home for the holidays. It was an ice-cold change of pace, because so far this season, Phillips has been the one to beat. After producing a stunning ginger molasses-cookie yule log in the first episode, and a “divine” glazed chocolate-cherry cake in the second, the pastry instructor was squarely in the sights of baker Lerome Campbell. “My biggest competition here is Douglas,” the Naples, Florida, Ritz-Carlton pastry chef said to the cameras during the third episode (which, for the record, Campbell went on to win). Campbell also remains in the top four—and the judges loved his coffee-ginger tiramisu.

Last night, Phillips lost sight of what makes tiramisu tiramisu—the light, fluffy textures of spongey cookies and mascarpone cream. But he still impressed with a command of flavors (even ones he thought were weird together), and an artistic decorating hand. The remaining four baking championship contenders are all likable, and talented—but Phillips has the pastry skills to bring the title home to Massachusetts.

Holiday Baking Championship is a sweet way to start the week, and if the lighthearted, luster-dusted competition inspires you, your coworkers might agree.

The show airs at 9 p.m. on Mondays, and there are two episodes left this season. Can’t get enough Holiday Baking Championship? Meet Season 4 finalist Joshua Livsey this Saturday morning, Dec. 8, at Harvest, for a Grinch-themed doughnut pop-up.