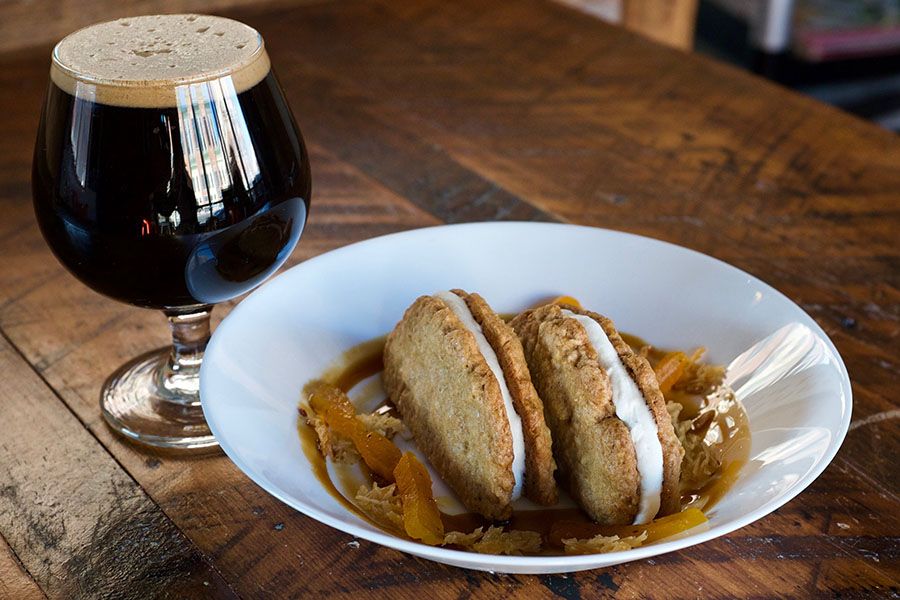 OK, Jeff Rowe knows most beer is vegan. The brewer and cofounder of Winter Hill Brewing Co. is currently vegan himself, and has been vegetarian for more than 20 years. Most of the beers he makes fit into his plant-based diet—but the milk stout, a sweet, velvety style defined by the addition of milk-derived lactose sugar (and a style Rowe happens to love), does not.

So, in part to honor six months of events with the pop-up vegetable kitchen, Littleburg, Rowe has made a vegan riff on the traditional, English milk stout. Debuting with dessert tonight during Littleburg’s monthly dinner at Winter Hill, Praxis coconut milk stout is a robust, 7 percent dark beer with the silky body that stout lovers expect from the style, without any added animal byproducts.

“Non-vegans should know that the fact that this beer is vegan is only notable for the style,” Rowe explains. In lieu of lactose with this milk stout, Rowe added powdered coconut milk to the boil; then, the beer conditioned on toasted coconut for added character. With a bill of chocolate and dark Munich malts from Maine’s Blue Ox Malthouse, “it ends up being kind of a pastry stout, but we’re not actually brewing with graham crackers,” Rowe says. “It is a sweet stout, but it finishes dry.”

While milk stouts with coconut have been made by other breweries, Rowe believes this is the first beer to eschew lactose and bill itself as a vegan alternative to the style. He says he almost didn’t brand it as such, as he believes the word can be off-putting for some omnivores. But he decided to push boundaries—and plus, this is only a five-barrel batch. If it takes off with consumers, Praxis could become part of Winter Hill’s regular brewing calendar, Rowe says.

The first keg tonight will pair with dessert by Littleburg chef Graham Boswell, an oat cookie sandwich filled with maple-almond buttercream, plated with spiced apricot, kataifi crumble, and mulled cider caramel. A former cook and baker at Oleana and Taco Party, Boswell launched Littleburg in fall 2017 to create “food that makes people see vegetables differently, and connect with cuisine from different parts of the world,” he previously told Boston.

Along with events at Lamplighter Brewing, Allston Diner, and elsewhere, Littleburg has appeared one Monday a month at Winter Hill Brewing Co., when the Somerville kitchen is otherwise closed.

“It’s nice for us,” says Rowe, as his team can simply sling beers while Boswell takes care of dinner.

“Praxis is vegan because we thought it would be fun to riff on the style,” Rowe continues, “but we also wanted to do something to go with our monthly Littleburg night and to celebrate vegans and non-vegans alike.”

Praxis will be available on draft and in crowlers to-go at Winter Hill Brewing Co. beginning Monday, Dec. 17, and should last until Christmas (until Rowe brews it again).