11 Questions with the Wahlberg Brothers 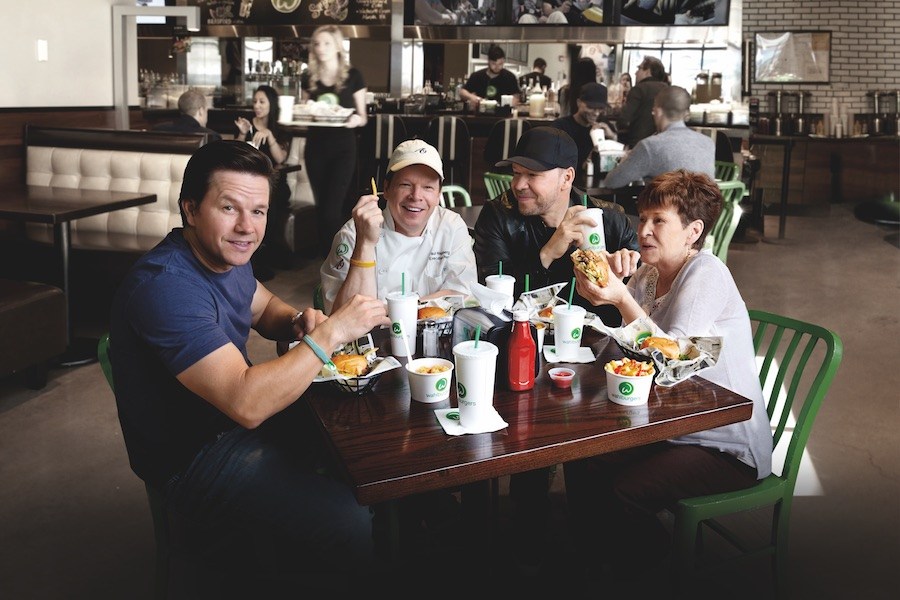 Besides opening Wahlburgers in Dorchester, the fam is filming season 10 of their A&E reality show. / Photo courtesy of A&E

Today, wicked famous Boston-born brothers Donnie, Mark and chef Paul Wahlberg officially open doors at the latest location of their Wahlburgers chain—the first in their native Dorchester—at South Bay Center, a mixed-use plaza with a new splashy 12-screen movie theater, luxury residences, and a growing number of slick restaurants. The neighborhood sure has changed since the days when the famous clan was gathered around the dinner table in a humble triple-decka’.

“It’s mind-boggling,” Donnie says of the transformation. “Dorchester has million-dollar condos now. If I knew that in ’88, when I first started making money with the New Kids, I would have bought every triple-decker in the city.”

The crew has planted a different kind of flag with this Wahlburgers location. It has all the burger chain’s staples (including boozy frappes and the Wahlbrewski, a custom Harpoon pale ale), plus a communal “family table” that represents the big brood.

Besides expanding the Wahlburgers brand, the brothers—and, of course, mother Alma—are currently filming the tenth season of the same-named A&E reality show. But we caught up with the trio for a lightning-round of questions about growing up in Dot, family dynamics, and eating habits—and then, obviously, compared their answers. Read on to find out which bro hates tuna casserole, who eats burgers with a knife and fork—and the biggest brawls they ever got into around the dinner table.

Which brother is the pickiest eater?

Donnie: “Probably Mark. For staying in shape, for one, because he’s usually trying to keep himself to six- to 10-percent body fat. But also because he thinks he’s some fancy wine connoisseur. He likes to pretend he has this palate of a great French chef. Meanwhile, while Paul does have that palate, he’ll eat anything. He’s like a dumpster.”

Paul: “Mark. He just is. He’s like, ‘I don’t like that,’ and that’s the end of it. Since he became hoity-toity, he’s slightly pickier.”

Which brother would win a burger-eating contest?

Mark: “Paul, because he likes to eat.”

Paul: “I would probably have to say Donnie. Or me. Back in the day, I could eat- but I’m a little older now and I can’t stash it the way I used to. But Donnie can still make it go away.”

What’s the topping you always pick off your burger?

Donnie: “I typically take off the bun. As I say, it’s easiest to eat a burger with a knife and fork. But also, no cheese. I don’t like cheese on a burger. Cheese begets cheese. The more cheese I put in my mouth, the more I get in my ass cheeks, and I don’t need that.”

Paul: “Cheese is my favorite and least favorite. I’m a horrible person. I like what I like. Sometimes, you can’t get enough good cheese on there. And then there’s other times I want no cheese at all. Like, get it off. It depends on my mood.” 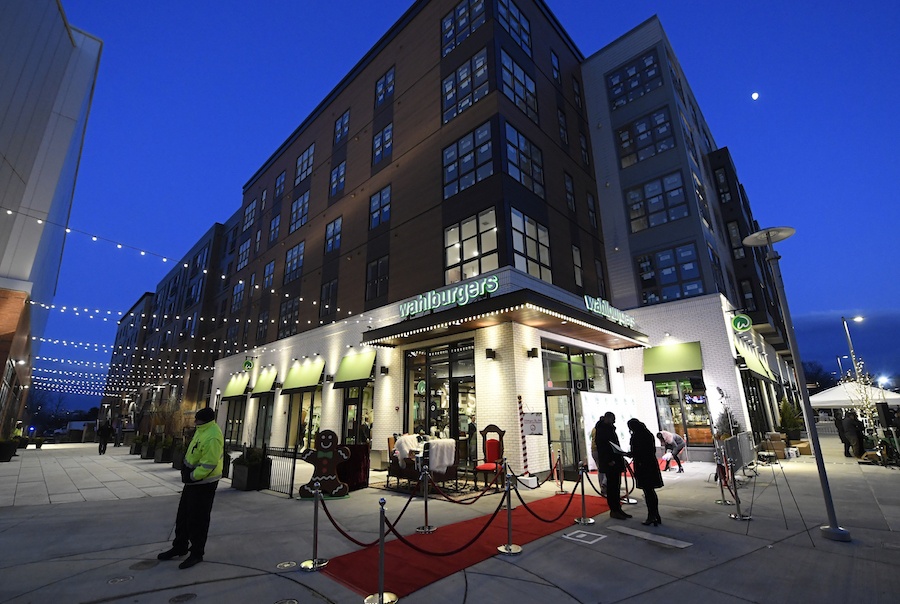 The new Wahlburgers in Dorchester during a preview party this week. / Photo by Brian Babineau Photography

What’s your favorite dish that your mother makes?

Donnie: “Roast pork. She would make this roast pork, a little pork loin with white rice and gravy and applesauce.”

What’s your least favorite dish that your mother makes? And you can’t say “nothing.”

Donnie: “Oh, I’m gonna say something. That horrific American chop suey that Paul probably said was his favorite. I would not eat that. It makes no sense to me. I don’t like it. I never liked it. I used to cry when we had to eat it. That’s one thing I love about my dad. He’d always say, ‘You don’t have to eat it,’ and make me a peanut butter and jelly sandwich for dinner.”

Paul: “When she started making mac-n-cheese with stewed tomatoes in it. No bueno.”

What was the biggest argument you ever got into around the dinner table in Dorchester?

Donnie: “Every now and again, we’d get dessert. Once in a blue moon, my dad would send out for ice cream. We’d be around the table and we’d argue over who was trying to finish last. The fight would start with someone saying, ‘You’re trying to be last.’ Then the person trying to be last would get defensive and blame someone else. The psychology of it was, we were all afraid that being last would somehow equate to being the person who had more ice cream. So no one wanted to finish last. My sister Tracy would take a little spoonful and milk it for an hour. She’d be savoring that one spoonful and everyone would say, ‘you’re trying to be last,’ and it would break into a fight.”

Paul: “Well, this was a reoccurring thing. Every once in a while, my dad would cook breakfast for everybody. Growing up, we loved eating his dropped eggs on toast: some poached eggs on toast. You’ve got one piece of toast down, the two eggs on top of them—then on either side of that, you’ve got half a side of toast, buttered and perfect. My sister Debbie always liked hers cooked more. So she’d say to my dad, ‘Can you cook my eggs a little more?’ And my dad was always like, ‘This isn’t a goddamn restaurant! I’ve got nine kids! I gotta feed all you people!’ The conversation would go like that.”

Which brother was most likely to help do the dishes after dinner?

Paul: “I would be most likely forced to wash dishes with my mother. I liked drying. Drying was easier—because by the time you got to them, they were dry.”

Which brother was most likely to run the grill at a cookout?

Donnie: “That’d probably be our brother Arthur. He’s the oldest brother. It wouldn’t be Paul. Paul would be out playing Frisbee with us and falling on his face the whole time. He’d be on his way to the emergency room getting stitches from tripping all over himself playing Frisbee. The struggle is real.” 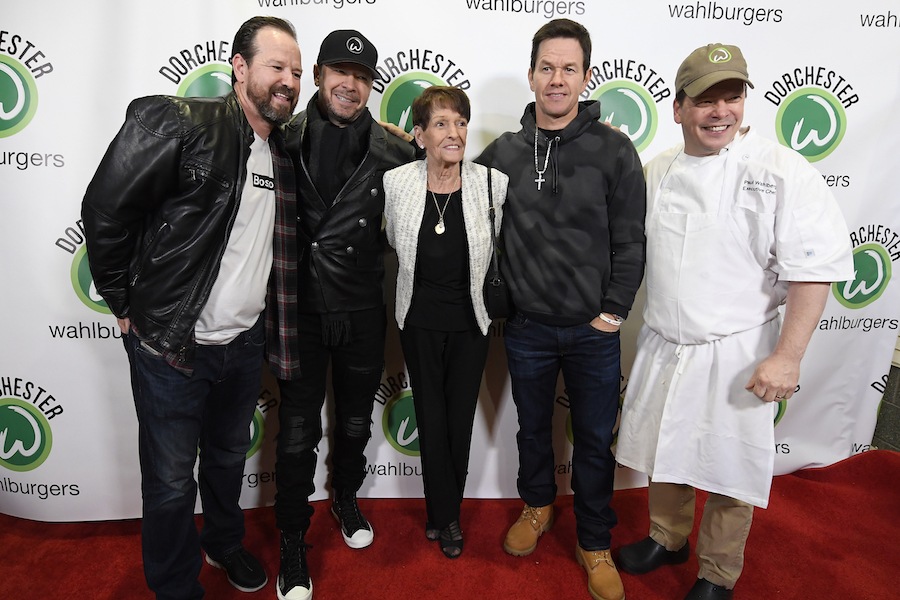 On the red cahpet. / Photo by Brian Babineau Photography

What’s your favorite place to eat or drink in Dorchester?

Donnie: “McKenna’s in Savin Hill. It’s the place to go. It’s just very Dorchester—we’ll just say that. But my favorite place in Boston is Nebo, next to the Intercontinental.”

Paul: “Anywhere owned by someone I know. Because when you go in there, you’re with friends—you’re with people who know the business. I like to be around restaurant people. Also, if I go to a friend’s restaurant, we’re going to have the same kind of conversations. They’re going be like, ‘Oh my god, you should have seen this the other night.’ ‘Oh my god, we lost power.’ And whatever it is, you have the chance to say ‘I’ve been working on this, try this.’ You give your opinion, and they know it’s not a criticism—it’s an opportunity to help develop. And that’s awesome.”

What was the best Christmas present you ever received growing up?

Donnie: “One Christmas I specifically asked for Stratego, the board game. I got it and nobody would play with me. But it was greatest gift I ever got. I’d play self-Stratego. Those Stratego sessions taught me how to navigate the delicate waters of dealing with my two brothers in Wahlburgers. I know when to send in the spy or the scout.”

Paul: “A bike. It was like, a glossy green Stingray. We all wanted bikes growing up. We lived in a triple-decker. My father was like, “There’s no place to put bikes. We can’t.” And then we ended up getting a house, and that very first Christmas we came downstairs and there were bikes lined up from stem to stern. Everybody got a bike.”

Paul: “I’m going to try and eat better. It never changes. It’s a work in progress.”