The millennial restaurant comes of age with a plucky Seaport addition. 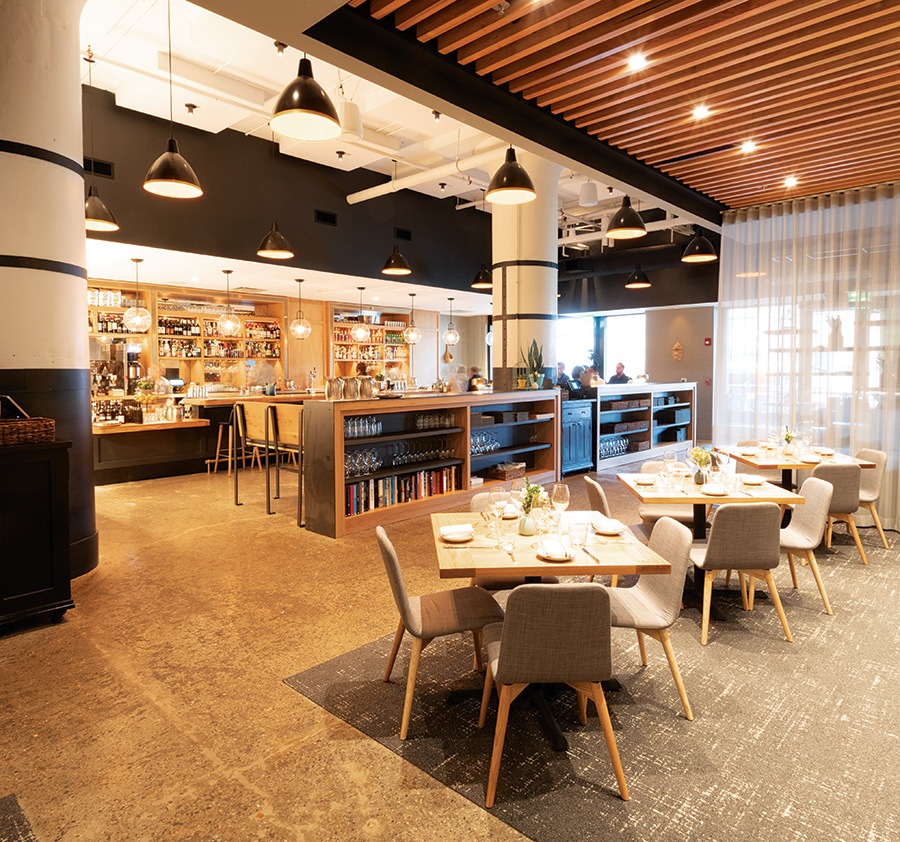 Restaurants have a way of capturing the prevailing culinary zeitgeist at their moment of creation. Take Barbara Lynch’s iconic No. 9 Park: It’s hard to imagine that restaurant—with its formal service style, Brahmin-friendly interior design, and continental menu—opening in this century. But its impact remains undeniable: No. 9 has helped launch the high-flying careers of next-gen chefs who have gone on to open their own of-the-moment ventures. Such is the case with No. 9 alums John daSilva and Ted Kilpatrick, whose new restaurant, Chickadee, feels so right now that you don’t need to be told it opened mere months ago. In this Seaport spot we see fine dining for maturing millennials, the group that gave us food trucks and coined “fast-casual,” for whom an elevated experience is no longer defined by white tablecloths in a Beacon Hill brownstone.

Located in the Innovation and Design Building, far past the Seaport District’s glitzy new towers, Chickadee comes across as gentle and approachable, its interior swathed in a soothingly modern palette of grays, blues, and white, plus plenty of blond wood. Pretty little touches, such as table vases spruced up with sprigs of baby’s breath, add warmth without formality. Service follows suit: casual but polished, as if the restaurant has been open for years. It’s all a welcome departure from the bicycle-shop-in-Brooklyn aesthetic that a decade of new restaurants all seemed to follow.

Chickadee describes its cuisine as “New England–born and Mediterranean-inspired,” which is a very good thing. As much as I like a turkey dinner with four sides of carbs, New England’s native gastronomy has far more to learn from the world than it does to offer it. The end result is exactly what you would expect if someone grounded in No. 9’s French-Italian canon raided the za’atar-stocked pantry of Sarma: seasonal dishes presented with unique flourishes that are interesting but not overwrought.

As today’s diners increasingly opt for bar seats, even in upscale settings, it’s essential to offer food that plays well with libations—and the “snacks” section of Chickadee’s menu is up to that task. We began our first visit with smoked-sea-trout dip ($8), a near-perfect fancy bar nosh that came under a blanket of light hollandaise-like sauce with just a hint of horseradish. If only there had been more dark rye bread chips to scoop it up. Sour-cream-and-onion doughnuts ($9) were similarly salty and savory, four munchkins accompanied by a dipping sauce laced with chives and caviar. Deep-fried Scotch olives ($9), meanwhile, put a Greek twist on the traditional hors d’oeuvres, wrapped as they were with loukaniko sausage and served with whipped feta. All of these offerings excellently complement Kilpatrick’s ambitious cocktail menu, a flock of bird-themed creations that are, like the food, complex and layered—particularly the millennial-pink Spruce Goose, which combines herbaceous genever with on-trend spruce tip.

Owing perhaps to a generation’s quest to shrink its carbon footprint (or just an understanding that meat need not be mandatory), veggie-focused menu sections are popping up all over town—including at Chickadee. Here, the now-ubiquitous roasted Brussels sprouts ($13) exceeded expectations thanks to fried garlic slices and an anchovy emulsion. Fun, if a bit muted in flavor, the crispy hen-of-the-woods mushroom ($13) looked like a Bloomin’ Onion from an alternate universe, with potato-and-almond skordalia standing in for the dipping sauce. Conversely, chunks of marinated beets ($12) dusted with pistachios over a thin layer of goat cheese were too much of a good thing. Still, all was forgiven with the grilled-carrot salad ($12), a perfect-10 plate that dressed the ribbon-thin slices with a touch of citrus vinaigrette and piled them atop a generous scoop of creamy avocado hummus. 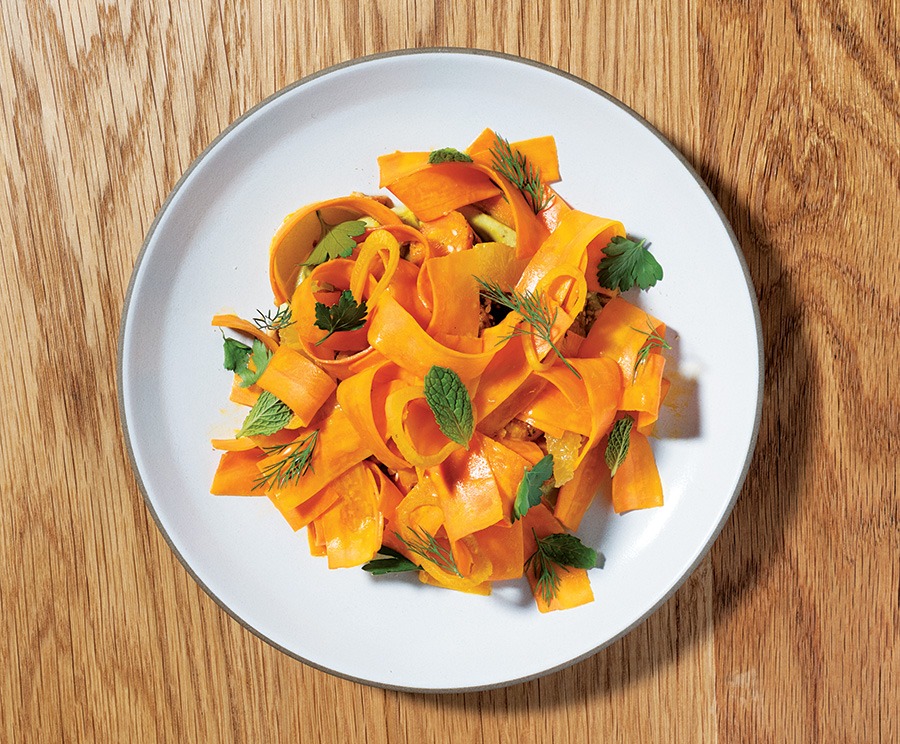 A standout salad of grilled carrots / Photo by Jenna Skutnik

Just as they were at daSilva’s last stop, Somerville’s much-loved Spoke Wine Bar, pastas (half order, $15–$16; full order, $26–$28) are a strong point for Chickadee. Served with hen-of-the-woods mushrooms, chestnuts, and Parmigiano atop a delicate cream sauce with the lightest hint of smoke, semolina gnocchi was a standout. Radiatore with barbecued rabbit and nardello peppers also checked all the right boxes, while potato bigoli with littlenecks and green harissa made for a livelier riff on spaghetti with white clam sauce.

Lucky for the city’s share-happy social media mavens, daSilva and chef de cuisine Stef Bui, another No. 9 alum, are turning out some of the most visually spectacular dishes of any kitchen in the city—though as the entrées exhibit, the dazzle doesn’t always make it from plate to palate. Perfectly seared yet a bit bland, sea scallops ($32) arrived in a deep bowl over honeynut squash, apples, and leeks in a light vadouvan curry. Lackluster duck breast ($32) looked sculptural: Two rectangles of rare duck, chewy and under-flavored, were stacked architecturally alongside cylindrical cuts of duck sausage, the real star of the plate, but confused by a smear of jicama purée, diced grapes, and smoked almonds. The porchetta ($30) was more on point: two slices of perfect thickness broiled until crisp on top and served with a side of Brussels sprouts in a tangy dressing made with the Italian fish sauce colatura. 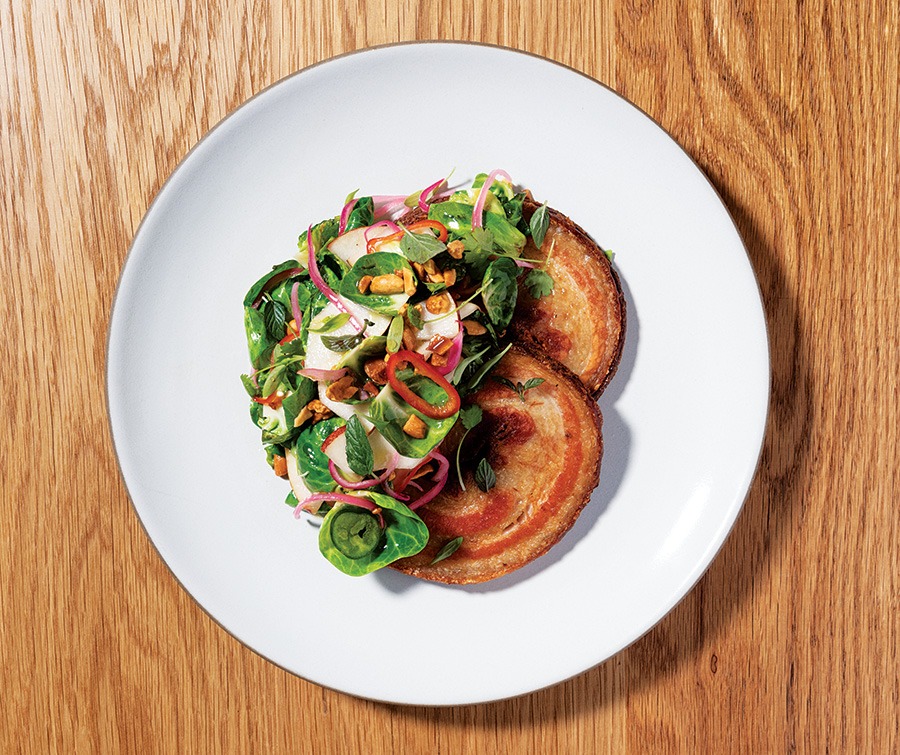 It’s worth saving room for dessert, a compact menu of pastries and sorbets that deliver deep flavors beyond mere sweetness, as well as the interesting selection of amari and dessert wines. The pretty apple galette ($11) and roasted mission figs ($10) were as satisfying to eat as they were to Instagram. That’s the thing about Chickadee: It doesn’t forget the foundations of fine dining even as it responds to the demands of a new era.

It’s a common pattern—in careers as well as in children—to idolize our parents or mentors at the outset, rebel in adolescence, and eventually arrive in adulthood at a sympathetic comprehension that respects, but does not always follow, the path of our predecessors. Chickadee doesn’t feel exactly like the storied restaurants on the résumés of its founding team, and it doesn’t want to. It has clearly set its own high goals. It’s consistently solid, often excellent, and shows great potential. A team that can turn out food this beautiful will surely spread its wings and fly high.