Drink This Now: The Great Molasses Disaster by Backlash Beer

A cellared batch of this macabre imperial stout is released for the 100-year anniversary of the Great Boston Molasses Flood. 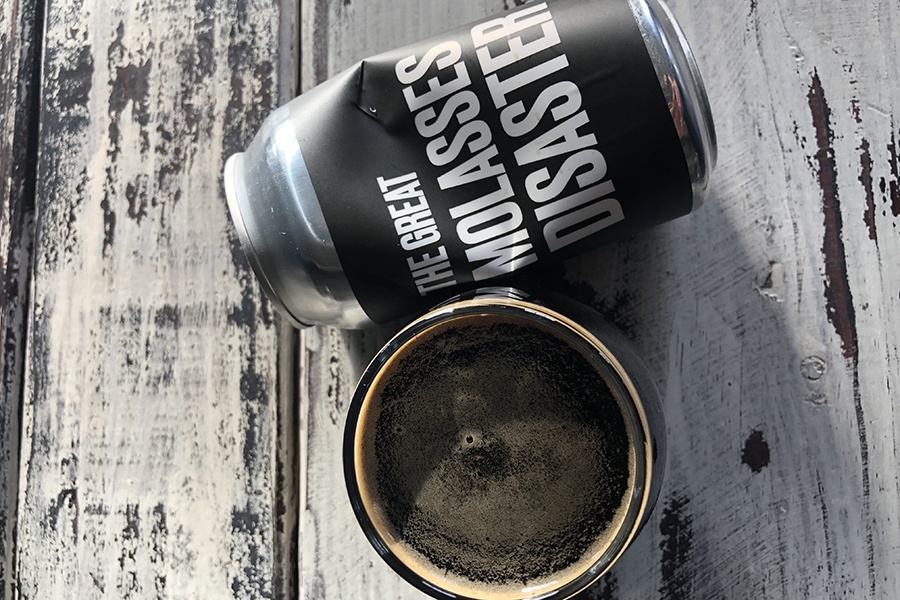 When Helder Pimentel learned the horrible details about the Great Boston Molasses Flood, it was over beers with friends.

Though the Backlash Beer founder and Taunton native recalls having great high-school classes—he even took advanced-placement history—he says he does not recall studying the “hows,” “whys,” and “now whats” around the infamous Massachusetts incident. On Jan. 15, 1919, not only did a tide of more than 2 million gallons of molasses cause massive destruction in downtown Boston, killing 21 people and injuring 150 others, but the disaster had implications on modern-day zoning laws and more.

To mark the 100th anniversary of the Great Molasses Flood this month, Pimentel’s brewery has filled the retail cooler with cans of the Great Molasses Disaster, a Boston-brewed imperial stout made with 200 pounds of blackstrap molasses. The beer will see limited Boston-area distribution, as well.

“It fascinates me, how few people know about [the disaster]. Especially Bostonians who grew up here,” Pimentel says. “We’re trying to educate people about what it was, and its significance to Boston history.”

Backlash, which recently opened a new production facility and taproom in Roxbury, often highlights its Boston connection through its brews; for instance, the rotating New England-style IPA Series, Stomping Grounds, celebrates the neighborhoods that are significant to the brewing company’s personal history. Pimentel was thinking about ways to expand that approach to the wider Boston lexicon. He noticed other breweries have beers inspired by the Boston Tea Party, and our role in the American Revolution—but there wasn’t a Molasses Disaster beer.

“This is such a quirky, weird, and an unheralded piece of Boston history, but it’s a terrible thing. We wanted to pay homage to it,” Pimentel says.

Backlash debuted the Great Molasses Disaster stout in late 2017, but the crew reserved an ample stash of the batch for this year’s centennial. A year in the cellar gives the 8-percent imperial stout more pronounced bittersweet chocolate flavors, and mellows out its initial roastiness, Pimentel says. It is not sweet; instead, the molasses imparts a rich, almost smoky depth of flavor.

Pimentel recently picked up a copy of Stephen Puleo’s authoritative book, Dark Tide, to learn more about the disaster—many customers ask about the curiously named beer.

“[The Backlash staff] will be well-versed in the history of it,” Pimentel says, if any beer-loving history buffs want to talk.

The Great Molasses Disaster is now available in cans to-go from Backlash Beer, and will hit retail accounts during the week of January 15.

More about the Great Molasses Disaster

Photos: The Destruction of the Great Boston Molasses Flood »

Why Doesn’t Boston Do a Better Job of Commemorating this Tragedy? »

The Molasses Flood in Pop Culture »