A longtime employee of the Cambridge restaurant group says two of the deli's owners led a culture rife with sexist and racist comments. 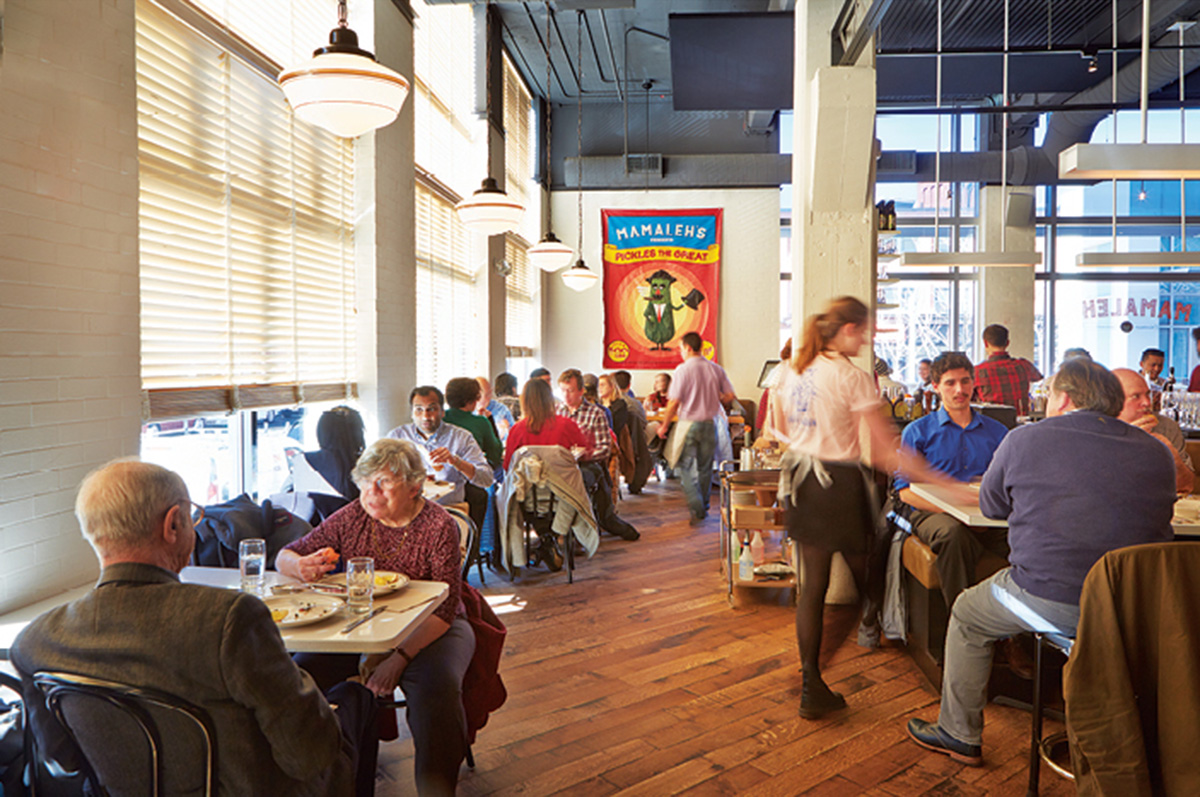 The dining room at Mamaleh’s. / Photo by Nina Gallant for “Restaurant Review: Mamaleh’s”

The restaurant group doing business as Mamaleh’s and two of its seven owners, Alon Munzer and Tyler Sundet, are named as defendants in plaintiff Duane Gorey’s lawsuit. Mamaleh’s lawyer has moved to dismiss the accounts of sexual orientation discrimination, race discrimination, and intentional infliction of emotional distress, according to documents provided to Boston. The parties are headed back to court on April 23.

Between July 2016 and February 2018, Gorey was working as an expediter at Mamaleh’s, a role that connects kitchen operations and the front-of-house. He started working for the company in 2008; he was previously a server and bartender at the restaurant group’s now-closed Hungry Mother, and an expediter at its bar, State Park.

According to the lawsuit, during Gorey’s time at Mamaleh’s, “good-natured teasing” that was common at work “evolved into a more pernicious form of ‘joking.'” The suit claims Munzer, Sundet, and two of their former subordinates would assign attractiveness ratings to female customers, categorized on racial and social levels, such as “99: Very attractive woman,” “Super88: Very attractive Asian woman,” and “99SP,” which stands for “secret penis,” and was used to describe customers who the kitchen team thought might be transgender. Gorey and another Mamaleh’s source told Eater the rating system started in the kitchen at Hungry Mother.

The lawsuit describes several other instances of that kitchen quartet making inappropriate, sexually-charged comments around or to other Mamaleh’s employees, including a joke about a female worker contracting a sexually transmitted disease. It also alleges two additional racist remarks (separate from the ranking system), including that Munzer used a racist slur to describe black children who attend a nearby school.

Regarding Gorey specifically, the former employee alleges escalating, homophobic teasing. Gorey left Mamaleh’s in February 2018, in what his lawyer calls a “constructive termination”—the legalese term for quitting because of a hostile work environment.

Two former Mamaleh’s employees spoke with Eater Boston to corroborate hearing sexually explicit comments directed at Gorey, and witnessing some racist and sexist behavior by kitchen leadership. A third source said there is “little effort by some members of the ownership team to call certain staff members by their preferred pronouns.”

In a statement provided to Boston today, the Mamaleh’s team says that it has “been advised by counsel not to litigate this matter in a public forum and not to discuss the specific allegations of his Complaint.” The statement does “categorically deny Duane’s claim that he was subjected to a discriminatory work environment.” It also specifically denies that Munzer used a racist slur.

“We acknowledge that from time to time we and some of our staff members have made inappropriate comments in our restaurants,” reads another portion of the statement. “These comments do not represent the kind of people we are. We apologize to anyone who may have been offended by this language. We have always sought in our restaurants to provide the best environment possible for our guests and our employees, and we intend to lead by example to ensure that we meet that standard.”