Will a hotshot chef’s American-Japanese comeback sink or swim in the South End? 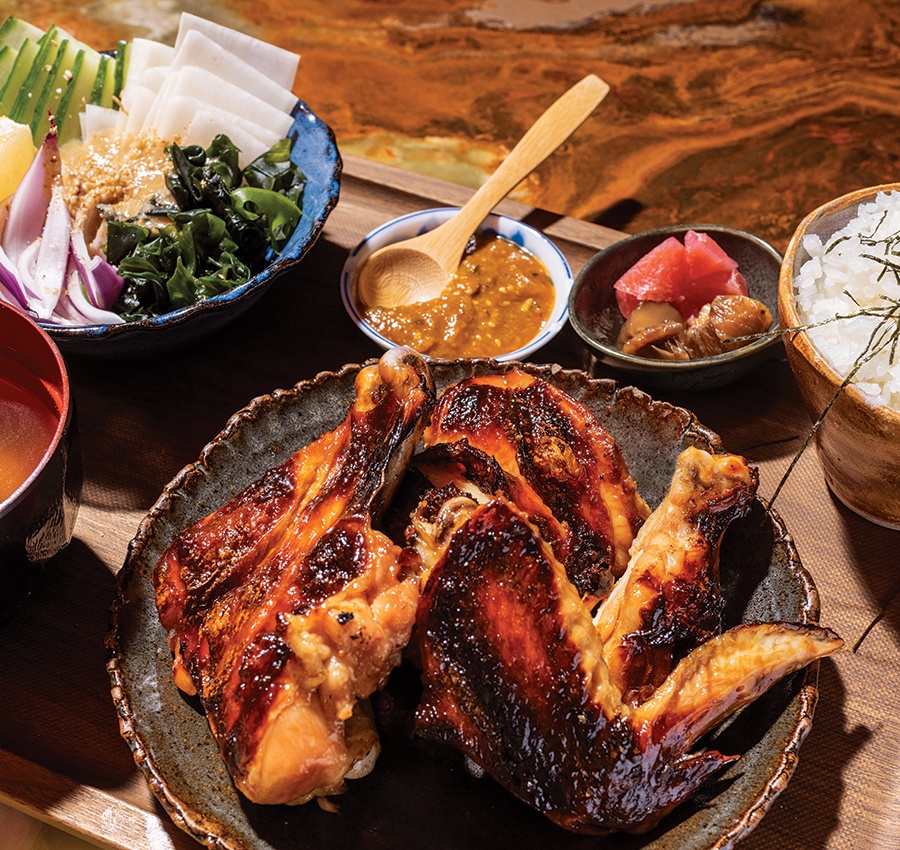 Soy-basted chicken is a standout at this Japanese-American brasserie. / Emily Sotomayor

Wondering why an izakaya-inspired eatery in Boston’s South End is called Whaling in Oklahoma? The restaurant’s name nods to a Sooner State conservation mandate that prohibits catching certain species on a long, occasionally head-scratching list of wildlife. The law garnered a moniker: the “Whaling in Oklahoma” code.

There are no whales in landlocked Oklahoma.

To be clear, the regulation isn’t specific to whales; theoretically, it also prohibits catching Borneo pygmy elephants in the state. But the point of the restaurant’s name is affect, not accuracy. Chef-owner Tim Maslow—a Momofuku alum known locally for reinventing his father’s decades-old (now-closed) Watertown diner Strip-T’s and commanding Brookline’s short-lived critical darling Ribelle—is well versed in the punishing cycle of food-world acclaim and criticism: He previously earned four James Beard Award nominations, along with less-flattering industry headlines for admitted hothead behavior and burnout. So the irreverent name of Whaling, a highly anticipated project sure to be scrutinized, seems to be a tongue-in-cheek reminder: It’s important to maintain a sense of humor.

For the most part, that approach works well. Whaling in Oklahoma, a modern American brasserie with Japanese-influenced flavors and technique, boasts a unified voice from its chef, who emphasizes conviviality over gussied-up fanfare. Maslow understands the language he’s speaking—and the results are consistently good, with flashes of brilliance. 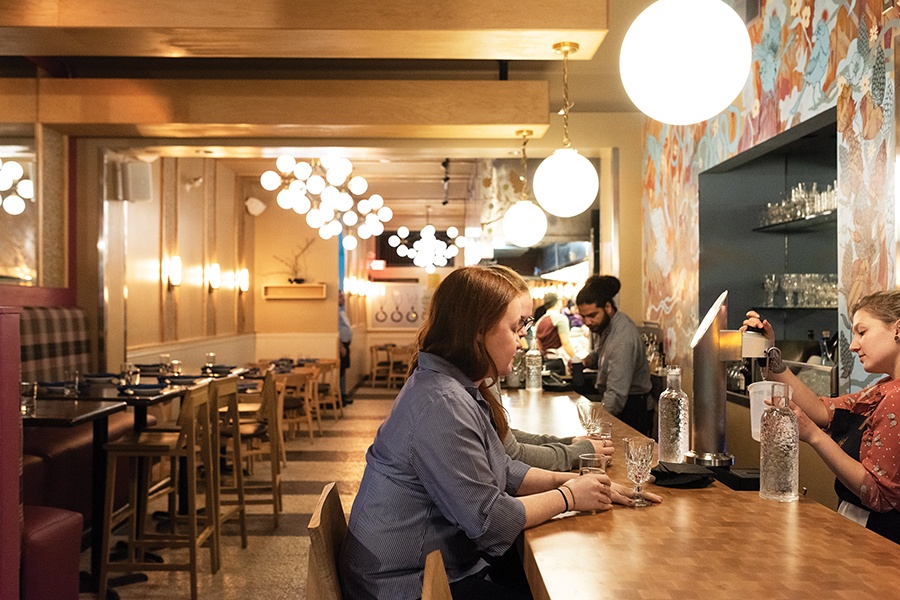 This restraint happily carries to the food side: When Maslow and chef de cuisine Matt Hummel are at their best, their dishes find that crucial balance between craft and simplicity, creativity and self-restraint. The open kitchen turns out raw mackerel ($14) that is lightly charred, served in a bowl of barely truffled ponzu and a tangle of radish sprouts—all enough to lend smoke, richness, and bite without overpowering the mackerel’s mineral clarity. I grumbled to my dining companion about the “hot takes on tartare” trend, then promptly ate my words along with a plate of fatty beef ($18), blushing and velvety, threaded with a suggestion of toasted sesame oil and sided with spicy egg jam, Asian pear, and whole shiso leaves for wrapping. Thick hunks of Japanese sweet potato—coal-roasted and caramelized in their natural syrup—cradled cultured butter and the welcome bite of fresh chives ($9). I ordered two.

For heartier fare, do try the soy-basted chicken ($22) starring local birds from Feather Brook Farm in Raynham. The luxuriously juicy grilled chicken was jacketed in a sweet-smoky glaze beside a fermented, rust-red pepper paste with the hidden funk of katsuobushi. The pile of lacquered legs came flanked by white rice, house-made pickles, shaved vegetables, and green-onion-laced miso broth. There’s also the sleeper-hit crispy pork katsu sandwich ($13) with shredded cabbage tucked between Kewpie-mayo-sluiced slices of toasted milk bread. In an endearing move, crusts were cut off and served alongside.

For the most comprehensive experience, choose Whaling’s “All You Can Eat” (not literally) tasting menu of chef’s whims—a play on the nomihodai (“all you can drink”) format of traditional izakaya watering holes. At $80 a head, it’s the best way to experience more than a dozen courses, including many off-menu surprises. The procession of dishes arrived shotgun style, balancing the fried and fatty with the raw and pickled. Among the stunners: a pair of poached scallops perched like plump royalty in the fan of their shell, crowned with an earthy zip of shiso salsa verde; and fried hamachi collar arching, unadorned, like a pair of antlers on black pottery, accompanied by a dish of ponzu for dunking silky hunks of fish flesh pulled from ragged bone. 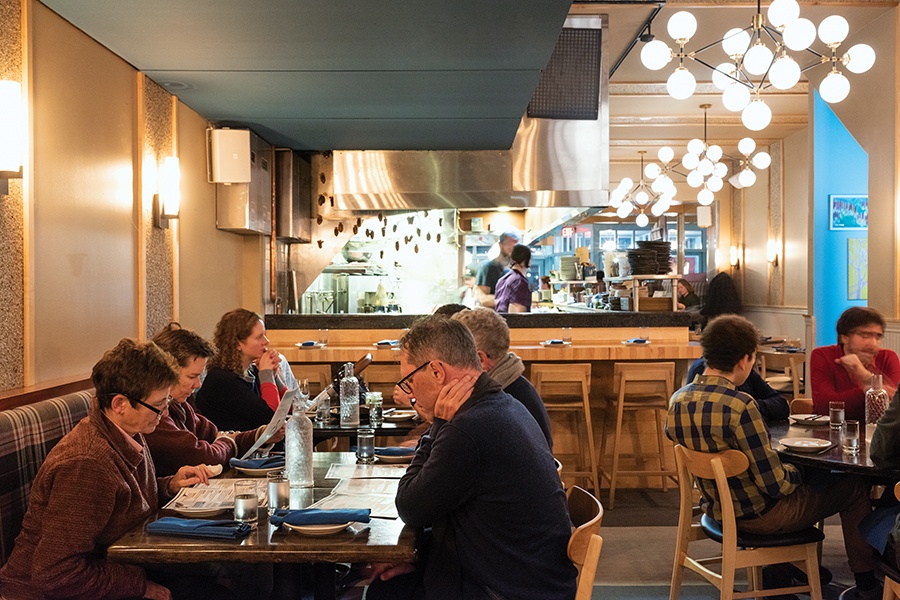 Guests get a front-row view of an open kitchen. / Emily Sotomayor

Not every dish lands at Whaling. One tasting featured the slightly confused offspring of a spicy tuna hand roll and avocado toast: an inch of fish smeared on milk bread with spicy mayo, tempura flakes, and a fringe of green onion. The tuna became a blanket of mush within its trappings, lost along with the point of the dish itself. The à la carte lobster hand roll ($12), meanwhile, didn’t have enough brightness to counter the dense wallop of fried lobster on a mound of rice. I craved pickles, the sting of alliums—any flavor boost to offer purpose beyond photogenic flair. Grilled redfish ($16) with salt-fermented Tosa onions was overly seasoned, and I wished for a stronger hit of the yuzu promised on the menu.

Dessert is a Sunday sweater: unremarkable, but cozy and well fitting. There was one showstopper, though: cotton-soft Japanese cheesecake ($10) capped with a runny drape of woodsy Jasper Hill Harbison. Essentially raclette on cheesecake, it was a bold swing of opulence so wrong it was extraordinary.

Sometimes, such moments of bliss are enough. At its core, Whaling in Oklahoma is a neighborhood spot more than a destination restaurant. The food is better for it. The challenge for a chef is the same as for any artist: to make creative obsession sustainable. Often, that requires less showing off and more of the trickier, vulnerable stuff: showing what you love. With a few blips, the team here is doing this well. They haven’t landed a whale, but they may have found a mooring.