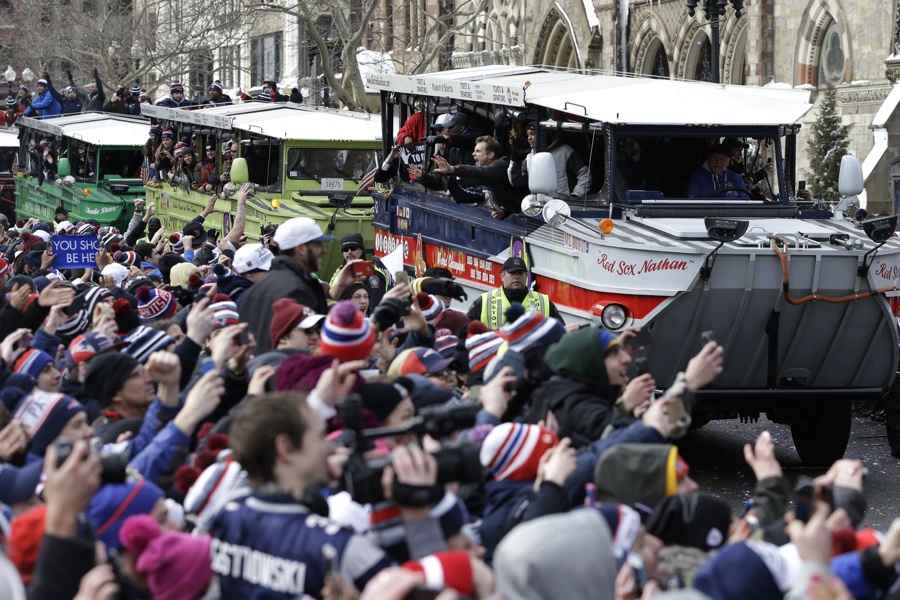 New England Patriots fans cheer as the team passes by in a procession of duck boats during a parade in Boston Wednesday, Feb. 4, 2015, to honor the Patriots’ victory over the Seattle Seahawks in Super Bowl XLIX Sunday in Glendale, Ariz. / AP Photo/Steven Senne

We can’t all hang out at Disney World with the certified G.O.A.T. Tom Brady and Super Bowl MVP Julian Edelman, but we can share in the revelry with the six-time champion Patriots here in Boston on Tuesday. Mayor Marty Walsh and the city has this year’s Victory Parade all mapped out, starting at 11 a.m. at Hynes Convention Center, and traveling along Boylston, Tremont, and Cambridge streets before wrapping up at Government Center.

Scope out a spot to watch and cheer at one of these parade-route bars or restaurants, which are doing their job with victory parade specials, early-season patio parties, and more excuses to take the day off from work on Tuesday to celebrate another Super Bowl championship.

Victory parade views don’t get much better than from this Boylston Street patio—and this year’s mild forecast looks ideal for being al fresco in February. The classic steakhouse is opening early at 10 a.m., and is dishing out specials all day like the Super Bowl filet slider and more. 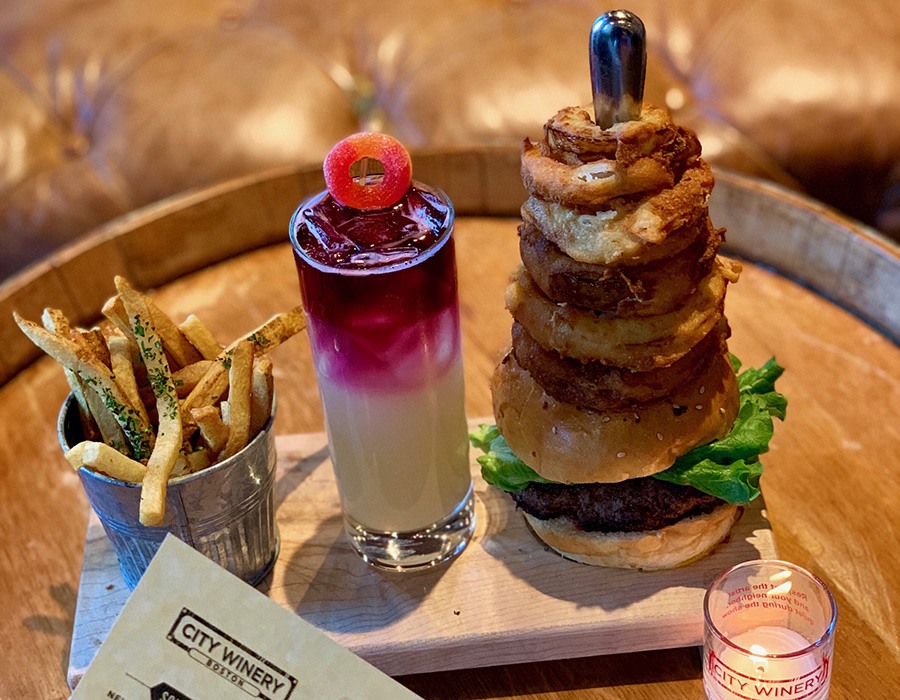 A cocktail called One More Ring, and a Six-Ring Burger are on special at City Winery during the parade. / Photo provided

After the parade finishes up at Government Center, head to this Valenti Square venue to replenish with the Six Ring Burger. Appropriately priced at $12 in honor of the indisputable greatest quarterback of all time, the sandwich loads an all-natural beef patty, sharp cheddar, and six beer-battered onion rings atop an everything-spiced brioche bun. City Winery is also shaking up a $12 cocktail special called One More Ring, and is donating $2 per drink sold to Best Buddies, a charity supported by Tom Brady.

Secure a spot at this Boston Common-area restaurant to be in the thick of things as the parade turns from Boylston to Tremont. The café on the corner opens daily at 7:30 a.m. with coffee, grab-and-go pastries, full-service breakfast and lunch, and a full bar. 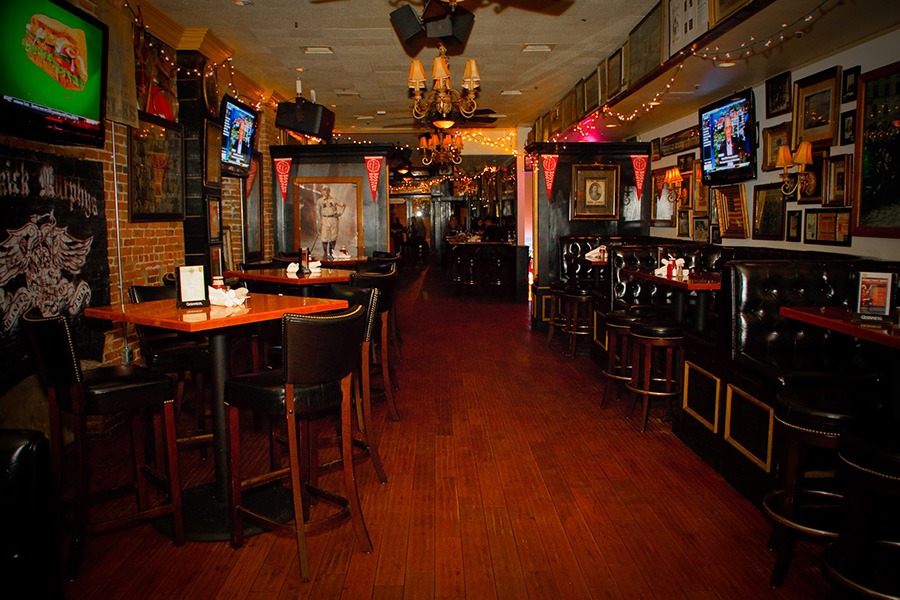 Of course the site of America’s first sports bar is getting the party started early: McGreevey’s opens on the parade route at 8 a.m., with an $8 Irish breakfast sandwich available until they’re gone.

This new, Copley Square trattoria and pizzeria has special friends coming over for its first Patriots parade: Personalities from KISS 108. The radio station is broadcasting live from the restaurant, which is opening early at 9 a.m. for the festivities. Bonus: It’s a February patio day!

Don your Patriots duds and grab lunch at the Revere Hotel restaurant—a block off the parade route—to earn your team complimentary wings. Chef Sean Dutson and team have a “six wings for six rings” special going on in both the dining room and bar, dishing out complimentary orders of wings on Tuesday to fans in Pats gear who order something else from the regular food or beverage menu.

In honor of the Patriots winning the Super Bowl, 200 fans get a free pulled pork sandwich at the Smoke Shop BBQ on Tuesday. / Photo by Melissa Ostrow

None of chef Andy Husbands’ barbecue joints are situated on the parade route, but all three locations are celebrating the latest Super Bowl victory with free pulled pork. The first 200 fans to visit the Kendall Square, Seaport, or Assembly Row restaurants on Tuesday get a free sandwich, thanks to a promotion with Prairie Fresh meats. Each location opens at 11 a.m., and the parade livestream will be on all the TVs.

Start your day with a “Bruschi burger” and claim a prime parade-viewing spot at this pub, which is opening early at 8:30 a.m. on Tuesday. The half-pound, all-pro patty is topped with jalapeño candied bacon, green chili and tomato salsa, lettuce, pepper jack cheese, and avocado ranch dressing; and sales support former Patriot and three-time Super Bowl champ Tedy Bruschi’s non-profit, Tedy’s Team. The Bruschi Burger is one of several Parade Day specials on the menu. 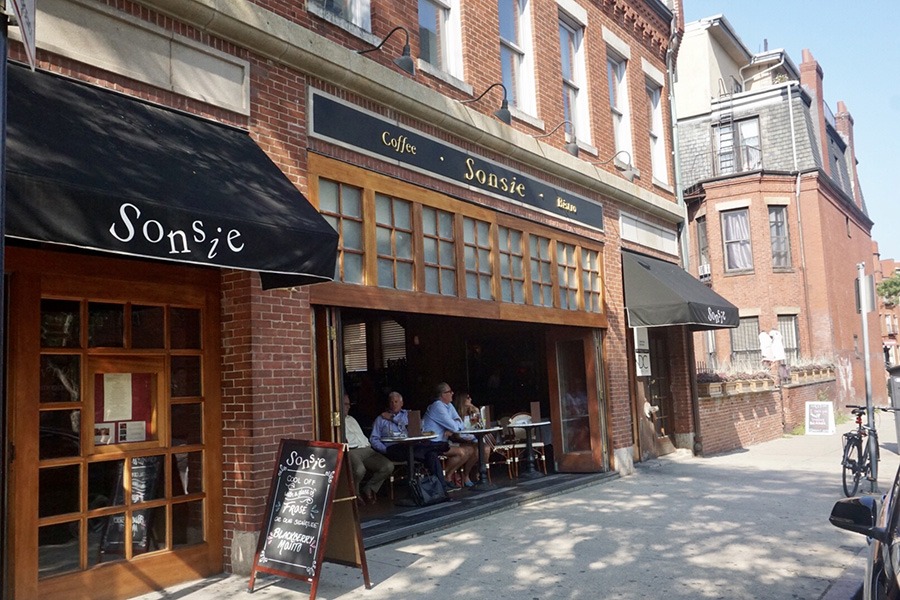 Before the parade kicks off, fuel up at this Newbury Street stalwart. Sonsie now serves brunch every single day, with options like sweet potato hash, Nutella and banana-stuffed French toast, huevos rancheros nachos, and more from chef Jason Hanelt. Bonus: Parade Day looks like it’s going to be a doors-open day, too. Brunch is on at Sonsie every day from 9:30 a.m.-2:30 p.m.

A complimentary cup of chef Jasper White’s famous clam chowder probably isn’t necessary to help you stay warm at the parade this year, but it’s still a welcome treat. Both the Cambridge and Back Bay locations of his New England clam shack are opening early at 10 a.m. in honor of the parade—and the Back Bay restaurant is right at the parade start line—and both are dishing out free cups of chowder between 11 a.m.-1 p.m.