Ask the Editor: Which Boston Restaurants Are Featured in Movies?

As more films are produced in Massachusetts, more local eateries get on-screen cameos. 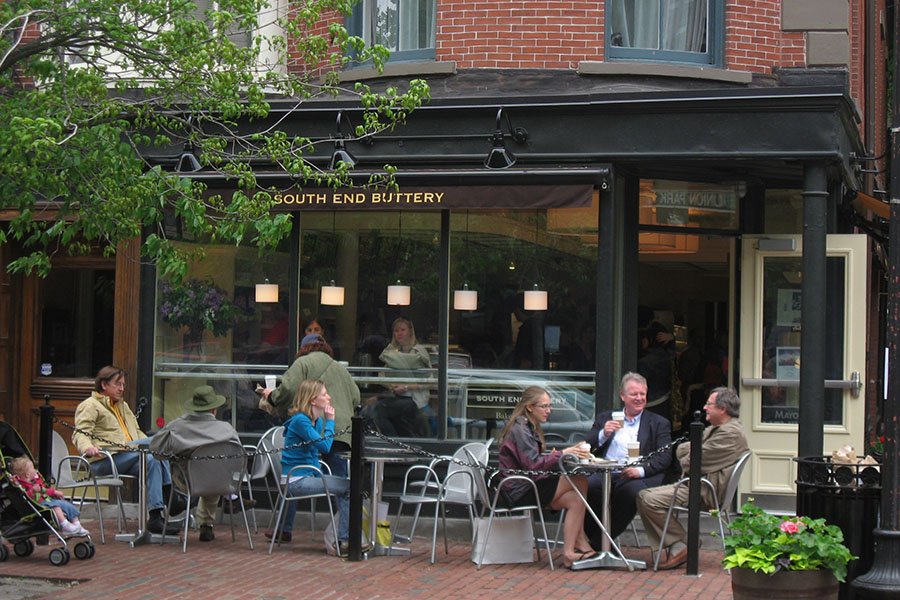 Now that the Super Bowl and the Grammys are behind us, I have full-on Oscars fever. It got me thinking: What restaurants have starring roles in award-winning movies?

Hollywood producers seem to love the way we look: At least 10 movie productions were filmed around Boston last year, the Globe reported. It’s always fun to spot recognizable neighborhood landmarks on the big screen, but here are a few of my favorite movie scenes featuring Boston restaurants.

Does that well-landscaped, brick-lined patio look familiar? South End Buttery is prominently featured in the 2016 Academy Award-winning Best Picture, Spotlight. About the Boston Globe team of reporters and editors that broke open the story of the Catholic Church’s sex abuse scandals, Spotlight gives a voice to those survivors. One such person was Joe Crowley, who in the film talked with reporter Sacha Pfeiffer at a table inside the café.

Pfeiffer is played by actress Rachel McAdams (who earned an Oscar nomination, a Screen Actors Guild Award, and more accolades for Spotlight). While she’s approaching South End Buttery to meet with Joe (played by Michael Cyril Creighton), the camera follows her and gives viewers a long look at the eatery’s patio and signage. “I still receive emails and text messages from people, that they finally got around to watching our movie,” says South End Buttery owner Richard Gordon, who was present for three days of filming and even fed the crew.

The café itself doesn’t look as familiar to Bostonians, as Spotlight producers swapped in different art and tabletops, but it is indeed recognizable. And fairly true to life: Though the Buttery didn’t actually open until 2005 (the movie is set in 2001), the real Marty Barron was a regular customer when he was editor of the Boston Globe, Gordon shares.

Another local restaurant that got a little makeover before its closeup is Aquitaine. In the Facebook origin story The Social Network, which earned a few Oscars in 2011, the South End bistro can be seen in the background when Mark Zuckerberg (played by Jesse Eisenberg) goes to the exclusive Porcellian Club to meet the Winklevoss twins. The Harvard students do not visit Aquitaine, but viewers can clearly see the restaurant’s signage—because producers repainted the gold lettering. “They wanted the sign to look brand-new in our windows, so they had all our stenciling done,” says managing partner Jeff Gates. His restaurant group’s Gaslight Brasserie, on the other hand, has its dining room featured in a few movies, including Ted and Knight and Day.

“Boston’s got a lot of draw for a lot of people,” says Gates, speculating about why the area is so popular for filming. “We have a tax incentive, but many states have tax incentives. To me, a lot of these movie filmings are additional advertising for our state and our town. People come in and say they saw us in Ted, Knight and Day, The Social Network. That’s happened numerous times. It registers with people.”

But filming here is also appealing even if the film isn’t set in Boston. In director Paul Feig’s Ghostbusters reboot—which earned Kids’ Choice and Women Film Critics Circle awards for three cast members—a Chinatown restaurant serves as a stand-in for the titular characters’ New York City headquarters. Instead of the prime real estate of a city firehouse like the original Ghostbusters crew had, Melissa McCarthy, Kristen Wiig, Leslie Jones, and Kate McKinnon’s characters can only afford space inside a kinda grimy restaurant called Zhu’s Hong Kong Food. The movie producers transformed our go-to hot-pot destination, Kaze Shabu Shabu, into their HQ. The restaurant’s real-life blue facade was covered in red, and a New York phone number replaced its signage. When I was reporting for Eater Boston, a tipster told me the film crew sprayed the building with dirty water to give it the desired grunginess.

Those are just a few of my personal favorite Boston restaurant cameos. Now, if you’re a movie buff looking for a fun place to watch the 91st Academy Awards—coming up on Sunday, Feb. 24—I also have a couple suggestions: Check out Trident Booksellers and Café‘s annual red carpet party, complete with a photo booth. The Butcher Shop is also hosting a viewing party this year, with complimentary cheese and charcuterie to nosh on during the red carpet pre-show, and Oscars-themed specials on the menu all night long. Enjoy awards season!

Correction: A previous version of this post mistakenly reported Rachel McAdams won an Oscar for Spotlight.