Bone Up Brewing Company Doubles the Size of Its Everett Taproom 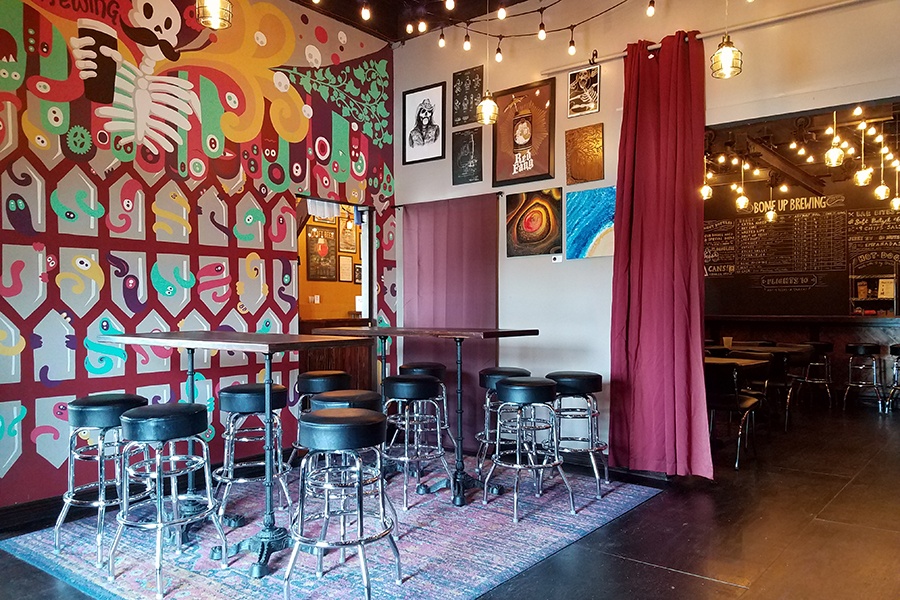 Bone Up Brewing Company doubled in size with a taproom addition. / Photo provided by Bone Up

For a funky, family-owned brewery just having fun in an increasingly beer-friendly neighborhood, growing pains are very real—and overcoming them is something to celebrate. Nearly three years after debuting in Everett’s so-called Fermentation District, Bone Up Brewing Company just unveiled a full-scale expansion of its taproom, with double the guest capacity, and room to grow its beer portfolio and events calendar. The grand opening party is this weekend.

Bone Up Brewing solidified Everett’s Santilli Highway area as the Fermentation District when it opened in 2016, quickly becoming a must-visit stop on a two-street tour that also includes Night Shift and Short Path Distillery. The City of Everett continues to be beer-friendly as it develops; Down the Road Beer Co. has since set up shop about a mile from the Fermentation District, and BearMoose Brewing is also in the works. But even still, it was an arduous process for Bone Up to get the green light to grow, cofounder and brewer Liz Kiraly says.

“We really love our location, and overall we love working with the city. But we’re in a 100-year warehouse,” Kiraly says. Longterm issues that were out of the leasees’ control “ended up trickling down to us when we got our building inspection underway,” she says. As a nod to Kafkaesque bureaucratic red tape they had to cut through to get to this weekend, Bone Up has nicknamed the grand opening celebration as Kafka Day.

Bone Up, founded by Liz and her husband, Jared, is known for such irreverent communications (Liz is in charge of art and branding), along with creative takes on classic beer styles, like a Key Lime white ale; and a lively taproom with a pinball machine and more games. On weekends, the taproom always hosts a food pop-up or two, and often hosts grown-up activities like themed trivia nights.

If you’ve ever visited Bone Up, you’re probably familiar with what the couple called their spot’s “oddly-cavernous lobby:” The entryway is where the line queued up when the taproom inevitably hit its maximum 49-person capacity. Almost exactly a year ago, the Kiralys signed a new lease with their landlord to build out more taproom and production capacity in part of that unit.

Now officially open, the front area is a lounge with 45 seats of its own, decked out in a colorful new mural by Liz, featuring Bone Up’s mustachioed mascot, Horatio. The new seating area ups the total capacity to 98 people, including the 24-seat outdoor patio. A central, partial wall separates the original taproom from the expansion, which will allow Bone Up to host private events. Overall, expect more trivia, movie nights, beer dinners, workshops, and the like, Kiraly says.

“We’re a lot more visible in the building now, and there’s better signage,” she adds. “Though we’ve still got a cozy, intimate vibe. That was essential.”

As far as the beer is concerned, Bone Up is still “tiny,” producing just about 600 barrels of beer annually on a 3.5-barrel system. But the Kiralys have added additional seven-barrel fermenting tanks, and the production expansion (located out-of-sight in the back of the taproom) is the seed of a burgeoning “funk program” the brewers are excited to launch later this year. While they have already started aging beers, like imperial stouts and Belgian styles, in clean barrels (without fermentation-inducing additions like different yeasts and fruit), barrels inoculated with brettanomyces and fruits “is the final frontier for [Jared and me] from a production perspective,” Kiraly says.

Get a first taste of what’s to come during Kafka Day. The weekend-long party will feature a few barrel-aged releases: El Pulpo, an imperial stout aged in rye barrels; the Quadless Leg Monster, a Belgian-style quad aged in apple brandy barrels; Melvin the Mammoth barleywine, and “an extra special” surprise release.