All that glitters is not gold at this posh restaurant group’s Boston debut. 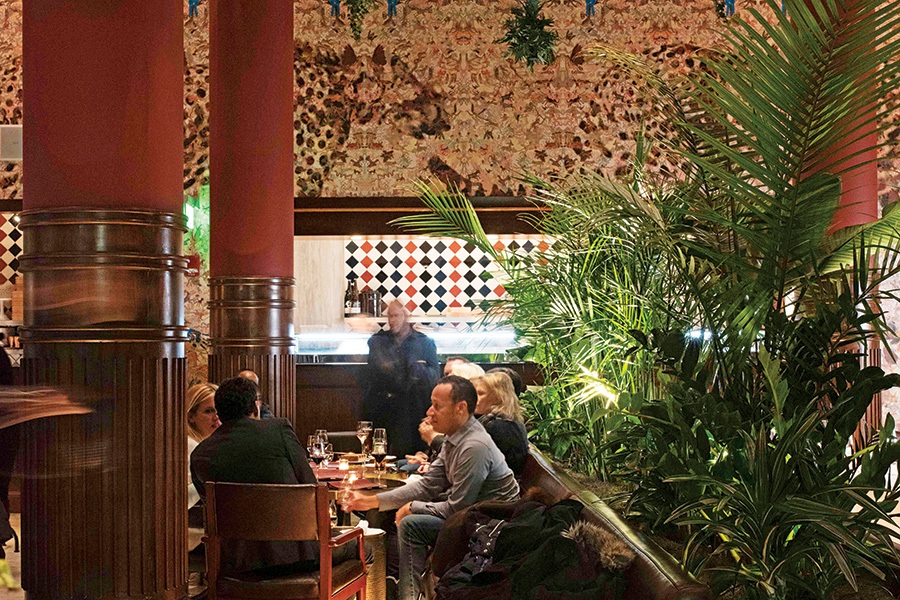 The problem: You’re stepping off your Gulfstream when a hot date comes through on Tinder Select, and suddenly, you need to pick a place for dinner. You want somewhere expensive—and fancy, in a bumping-music-and-bottle-service kind of way. But what type of food? Your date’s profile lists favorites that range from sashimi to steak to tacos.

The solution: Nahita in the Back Bay, where you’ll find all of them—yes, at the same time—served in a sweeping, fern-filled room your date won’t be able to resist showing off to his or her 30,000 followers on the ’Gram. With menu prices that can push dinner for two over $300 post-tip, it’s the perfect place to show off that Amex Black Card. But unlike the other restaurants in town that occupy that rarefied space, Nahita is seemingly less concerned with nailing elegant food and refined service—boring!—and more concerned with serving sex appeal and #epic orders like guacamole ($13) topped with spicy king crab (add $29). Nahita is slick. It’s shiny. So is gold—but so is lead.

Opened in September in the space formerly occupied by the pretty but confused Liquid Art House, Nahita is the first Boston restaurant from D.ream, an Istanbul-based hospitality empire whose portfolio features jet-setter favorites in glitzier cities like London, Madrid, Miami, and Dubai—including Nusr-Et, the steakhouse chain commandeered by chef Salt Bae, well known as a viral meme sensation for photos and videos showcasing his stylish, flamboyant preparations.

The restaurant is a louche spectacle to behold, a riotous jungle of draping greenery and wildcat wallpaper populated largely, at least on weekends, by international types, couples on dates, and girl squads in designer outfits revving up for a night out. It’s the perfect place to be young and fabulous (or to pretend you still are). Surprisingly, despite the high energy and unironic disco soundtrack, conversation is comfortable even for middle-aged ears—even at the bar, where the cocktails come courtesy of the estimable beverage manager Charlie Smedile, formerly of Tiki Rock and Uni. Standouts include the juicy Monster Smash, a mezcal-and-blackberry concoction that’s as pretty as the patrons, and the pleasant Harvard Yard, a mix of rum, apple, toasted pumpkin seed, and lime, both $16. 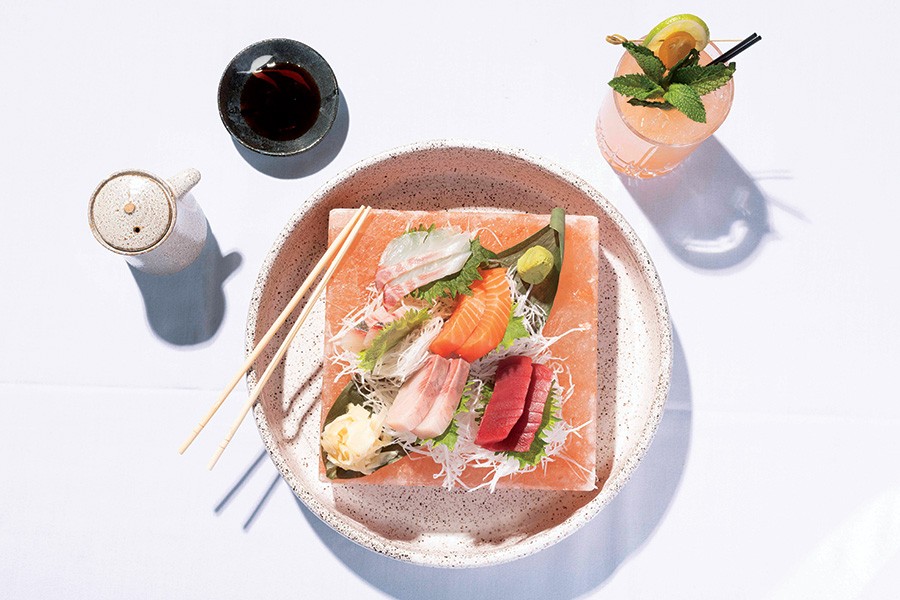 Strong seafood, such as the steamed whole fish and a sashimi sampler (above), can’t save the high-priced Nahita from low marks. / Photo by Emily Sotomayor

Eventually, though, the beautiful people have to eat. Nahita’s expansive menu outwardly identifies as nikkei cuisine, a deeply rooted culinary dialect influenced by Peru’s 19th-century wave of Japanese immigration, but when I visited, the array of mostly small, shareable plates also stumbled through elements of Mexican, Turkish, and other cuisines. (At press time, the restaurant was in the process of streamlining the menu and removing the Turkish elements.)

Let’s start with the good: There’s a lot of seafood on feature, and it’s consistently strong. The sashimi sampler ($56) brought two pieces each of five varieties of fish, all fresh and buttery. Fluke ceviche ($21) delivered a radiant marinade of lime, sweet potato, and red onion that made a star of the often-bland fish. Salmon tiradito ($19), a nikkei take on sashimi, set wild salmon and roe atop a bed of quinoa and Peruvian pepper sauce that gave the luscious fish a perfect kick of heat. Though unadorned prawn tempura ($18) arrived looking like an afterthought, the first bite revealed a master class in frying shrimp: crispy outside, fluffy and flavorful inside. And head chef Efe Onoglu is justly proud of his sudado de pescado Chifa ($44), a Peruvian-Chinese whole steamed fish in ginger-soy broth. He made a tableside visit to explain his favorite parts of the fish, a thoughtful touch, and the meaty branzino could have fed two.

But when Nahita strays from seafood, things get a little rockier. Shaved baby artichoke ($17) with miso, Parmesan, and truffle-yuzu dressing was a pileup of flavors and textures, and looked like a pile of straw. Tender pan-fried beef livers ($17) received a delightfully liberal application of Turkish spices, but came off a bit dry, much like the tantuni beef tacos ($12). Wild mushroom tacos ($15), meanwhile, were instantly forgettable. 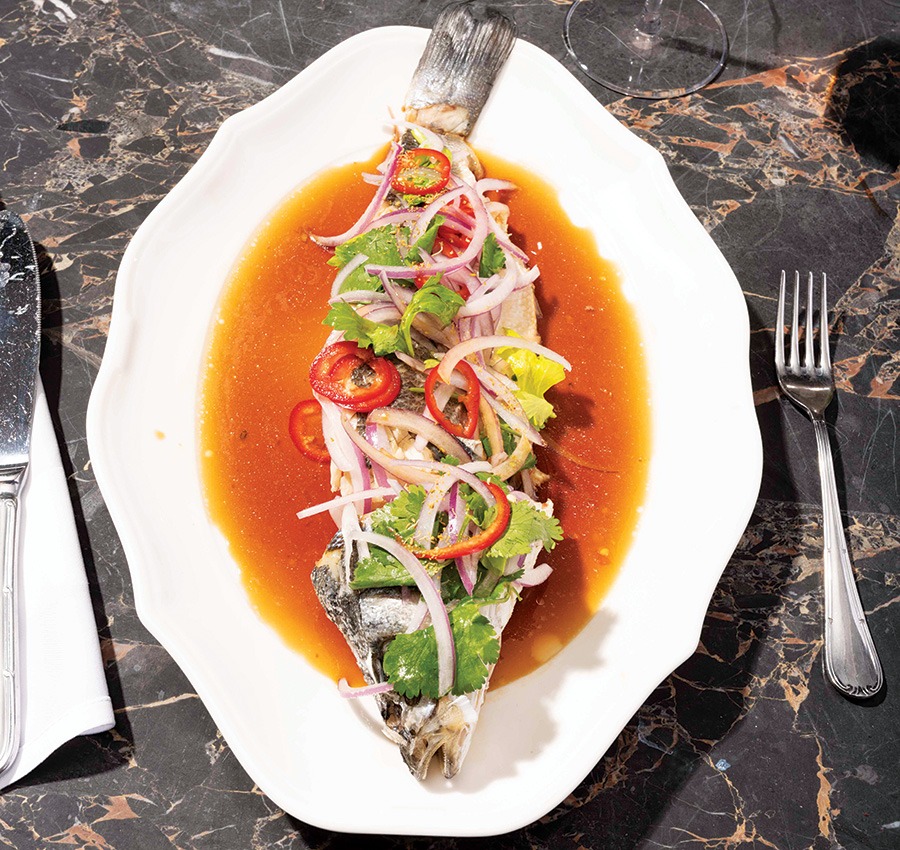 Strong seafood, such as the steamed whole fish (above) and a sashimi sampler, can’t save the high-priced Nahita from low marks. / Photo by Emily Sotomayor

A wheeled cart prowls the dining room, from which waiters in black rubber gloves (kinky!) ceremoniously carve enormous steaks, whole ducks, and racks of lamb tableside. Like much of Nahita, it’s a bit silly, but for the prices ($108 for a 36-ounce bone-in rib-eye; $185 for a 46-ounce porterhouse), it ought to seriously deliver. No such luck. Seconds into carving, our server shuffled off, mumbling about needing a sharper knife. Ordered medium-rare, our steak arrived rimmed with gristle and overcooked around its outer inch. And as if this hunk of cow hadn’t suffered enough, it was unnecessarily accompanied by taco service: bitter mole, dry tortillas, bland pico de gallo, and garnishes of scallions, cilantro, mint, cucumber, and daikon radish. The whole experience felt amateurish, more cruise ship than fine dining.

Service, like the seafood, was certainly consistent—but unlike the excellent fish, it was comically bad. On one visit, our seemingly dazed server asked us about our tacos before they’d even arrived. On another, we were advised that our shrimp was on the way—five minutes after the plates had been cleared. Minor errors? Maybe, but even a forgiving patron eventually withers under their accumulation. To their credit, servers offered smart wine pairings, such as an orange Chilean Moscatel de Alejandra ($12) that stood up brilliantly alongside complex seafood flavors.

Executive pastry chef Thomas Langille (Troquet, Bistro du Midi) turns out terrific desserts, including crispy churros ($10) and a decadent chocolate-mousse parfait ($16). If you make a meal strictly of seafood and sweet finishes, you might very well leave satisfied. Ultimately, though, Nahita needs to sharpen more than its knives if it wants to be taken seriously. Then again, it may not need to: On every visit, the place seemed chock-full of people raucously living their #bestlife. Oh, to be one of them.